Former President Trump has been accused of anti-Semitism after claiming that Jews in America ‘no longer love Israel,’ and that evangelical Christians love it more.

‘It used to be that Israel had absolute power over Congress and today I think it’s the exact opposite,’ Trump told Israeli journalist Barak Ravid in a clip provided to the Unholy podcast, released Friday.

‘I think Obama and Biden did that,’ the former president continued. ‘Yet in the election they still get a lot of votes from the Jewish people. Which tells you that … the Jewish people in the United States either don’t like Israel or don’t care about Israel.’

He then went after the New York Times.

Trump referenced the Sulzberger family, which has published the Times for generations.

But Times publisher Arthur Ochs Sulzberger Jr. is not Jewish. He was raised in his mother’s faith, Episcopalian, and later stopped practicing religion, according to The Times of Israel.

Trump’s son-in-law Jared Kushner is Jewish, as is his daughter Ivanka, who converted when they married.

But the former president has reportedly accused his son-in-law of being too loyal to Israel.

‘Jared’s more loyal to Israel than the United States,’ Trump once said during a White House meeting, journalists Bob Woodward and Robert Costa wrote in their book, ‘Peril.’

‘It used to be that Israel had absolute power over Congress and today I think it’s the exact opposite,’ Trump said 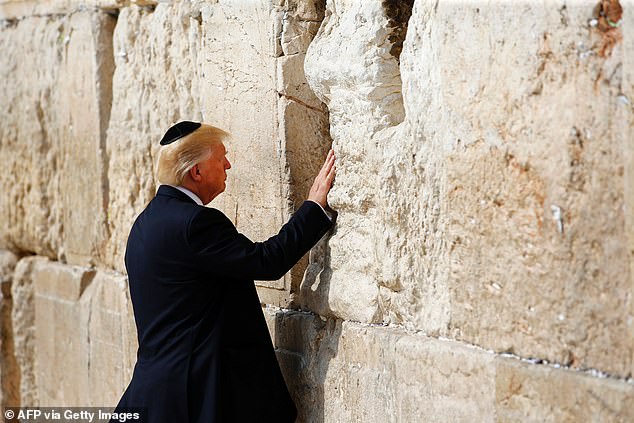 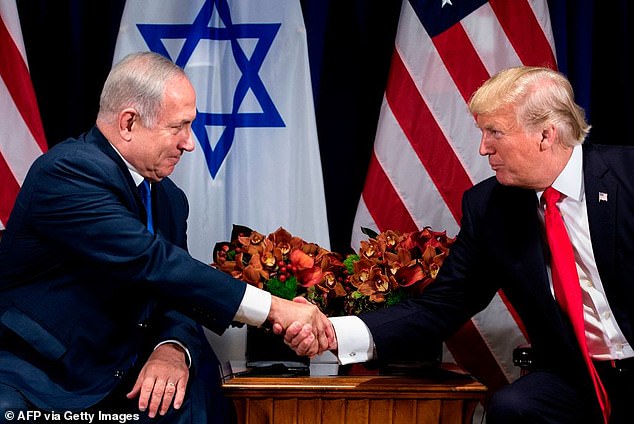 Elsewhere in his explosive conversation Trump had with Ravid, he hit out against his longtime ally, ex-Israeli Prime Minister Benjamin Netanyahu

The Democratic Majority for Israel condemned the former president’s remarks as anti-Semitic.

‘While we hesitate to share this antisemitic screed from former President Trump, we cannot turn a blind eye — every elected Republican who still stands by him should answer for this dangerous rhetoric & must condemn it in the strongest possible terms,’ the progressive pro-Israel PAC wrote on Twitter. 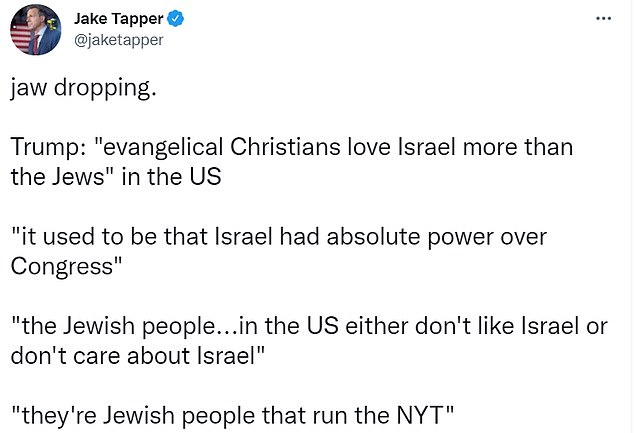 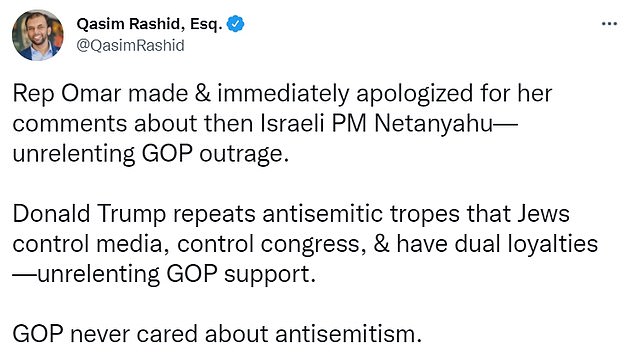 ‘Idiotic and offensive remarks here. If you put a microphone on front of Trump, chances are that’s what you’ll get. Then you freak out over it, feigning surprise, and give him more oxygen,’ Leon Wolf, managing editor of The Blaze, wrote on Twitter.

‘Idea: stop it. He feeds off these controversies.’

‘Trump’s antisemitism can be a little trickier for some to recognize (or easier to ignore) because it’s couched in positive terms. When he says “It used to be that Israel had absolute power over Congress,” he’s saying that was a good thing he misses! But it’s the same old trope,’ Jacob Rubashkin wrote on Twitter.

‘Trump couldn’t be more explicit that he does not give a s**t about the jewish community or Israel. All he cares about is motivating evangelical christian voters in the US. This is truly vile antisemitism,’ Pod Save America host Tommy Vietor said.

Elsewhere in his explosive conversation Trump had with Ravid, he hit out against his longtime ally, ex-Israeli Prime Minister Benjamin Netanyahu.

Of his efforts to enact a peace plan between the Israelis and the Palestinians, Trump said in quotes leaked Monday: ‘I don’t think Bibi ever wanted to make peace.’

But in a piece for Axios, Ravid said that Trump spoke highly of Palestinian leader Mahmoud Abbas.

‘I thought he was terrific,’ Trump said. ‘He was almost like a father. Couldn’t have been nicer. I thought he wanted to make a deal more than Netanyahu.’

Abbas reportedly told Trump he was eager to make a deal, while Netanyahu told him to wait.

Peace between Israel and Palestine has eluded US presidents for decades, and in the beginning of 2020, Trump proposed a deal that would have been the most favorable to Israel since the Madrid peace conference in 1991.

‘My whole life is deals. I’m like one big deal. That’s all I do, so I understand it. And after meeting with Bibi for three minutes … I stopped Bibi in the middle of a sentence. I said, ‘Bibi, you don’t want to make a deal. Do you?’ And he said, ‘Well, uh, uh uh’ — and the fact is, I don’t think Bibi ever wanted to make a deal.’

Trump also said that Netanyahu’s opponent, deputy Prime Minister Benny Gantz, would have been much easier to strike a deal with.

Trump said of Gantz: ‘I thought he was great. A really impressive guy. In my opinion, it would have been much easier to make a deal with the Palestinians [with Gantz] than with Netanyahu. The Palestinians hate Netanyahu. … They did not hate Gantz. It’s a big factor.’

Earlier this year, Trump said that US Jews ‘don’t love Israel enough’ because he only got 25% of the Jewish vote in the 2020 election.

‘You know what really surprised me?’ Trump asked in an interview with the ultra-Orthodox magazine Ami. ‘I did the Heights, I did Jerusalem and I did Iran — the Iran deal was a disaster, right?’ he said referring to his decisions to recognize Israeli sovereignty over the Golan Heights, recognize Jerusalem as Israel’s capital, move the US embassy there and pull the US out of the Iran nuclear deal.

‘And I also did many other things. Jewish people who live in the United States don’t love Israel enough. Does that make sense to you?’ he asked.

‘I’m not talking about the Orthodox Jews. I believe we got 25% of the Jewish vote, and it doesn’t make sense. It just seems strange to me,’ he said,

Trump has drawn criticism for such comments before, as associating US Jews with dual loyalty to Israel is often be interpreted as an anti-Semitic trope.

In 2018 while speaking to a US Jewish group, the president referred to Israel as ‘your country.’  And in 2019, he said that Jews who vote for Democrats are ‘disloyal.’