President Trump said the 2020 presidential election will be a ‘fraudulent mess’ and Americans ‘will maybe never know who won’ if they are forced to submit their votes through the mail.

Trump continued to cast doubt on the mail-in voting process in a series of tweets Saturday morning as he responded to reports of fraudulent ballots that were uncovered during a recent local election in New Jersey.

The article said 20 per cent of mail-in ballots in Paterson had been rejected after some were found to be linked out-of-towners or dead residents.

The report was tweeted by GOP national spokeswoman Elizabeth Harrington who accused Democrats of tampering with ballots in New Jersey and other states in recent elections.

Trump has been a fervent critic of mail-in voting, which he claims will lead to election fraud 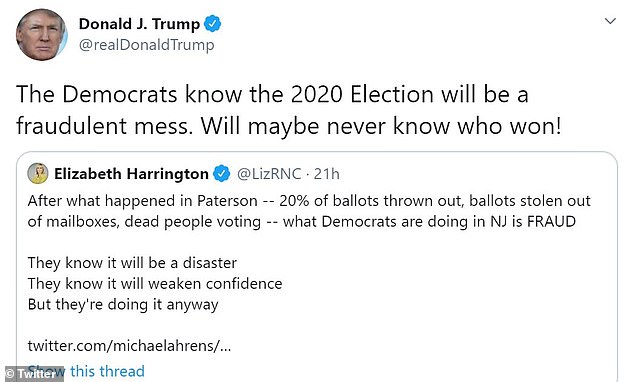 The president on Saturday continued to cast doubt on the mail-in process, accusing Democrats of tampering with ballots 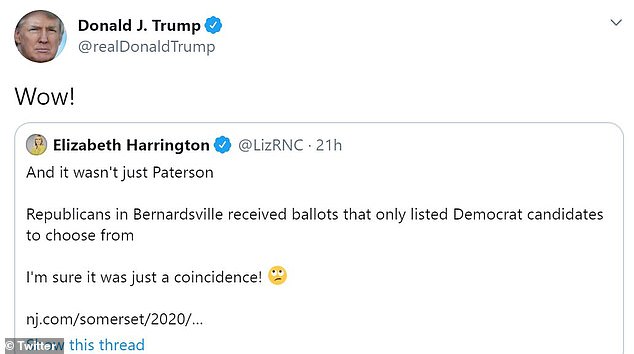 ‘The Democrats know the 2020 Election will be a fraudulent mess. Will maybe never know who won!’ Trump said in response.

The president has been a frequent, fervent critic of mail-in voting which he claims leads to election fraud – a claim fiercely disputed by critics and even his own party, which fears losing votes if its supporters do not mail their ballots.

Mail voting is expected to surge to 50 per cent as the coronavirus pandemic rages ahead of the November 3 election.

On Thursday Trump said he opposed providing funds for the struggling US Postal Service for mail voting, after service was curtailed amid cost-cutting and efficiency measures ordered by Louis DeJoy, the new postmaster general.

United Parcel Service and FedEx on Friday shot down social media calls that they step in to deliver mail-in ballots from USPS, which is warning states of potentially ‘significant’ delays.

‘State ballots must be postmarked to be considered valid and only the USPS has lawful postmarking status. Therefore UPS, FedEx and other private parties cannot technically be involved in shipping ballots,’ UPS told Reuters in a statement. 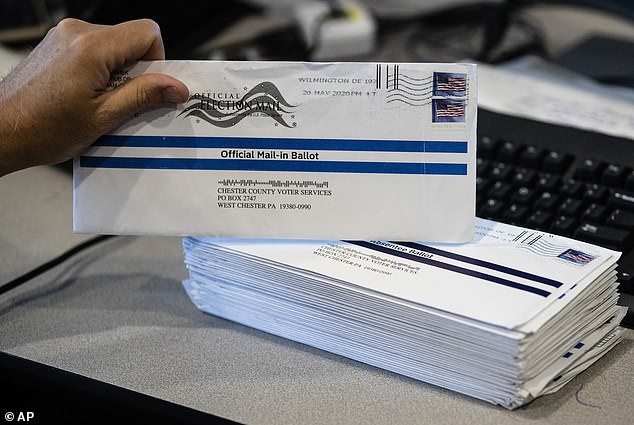 ‘FedEx does accept individual ballots, and we advise that customers planning to return their ballots via FedEx should closely review their state’s guidelines on absentee voting and deadlines for ballots or related election documents,’ FedEx said.

USPS on Friday sent a warning to all 50 states saying it cannot guarantee all ballots cast by mail will arrive in time to be counted, even if mailed by state deadlines, raising the possibility that millions of voters could be disenfranchised.

Voters and lawmakers in several states are also complaining that some curbside mail collection boxes are being removed.

In a viral tweet on Thursday, author and radio host David Rothkopf said there was a ‘big opportunity’ for UPS and FedEx to deliver ballots for free.

‘You’ll overnight become the most beloved and respected organization in America,’ he wrote.

Various laws and regulations for the most part prohibit private delivery companies from handling mail-in and absentee ballots, the companies and experts told Reuters.

Exceptions include deliveries deemed ‘extremely urgent’ by statute and deliveries on the day of and afternoon prior to election day. 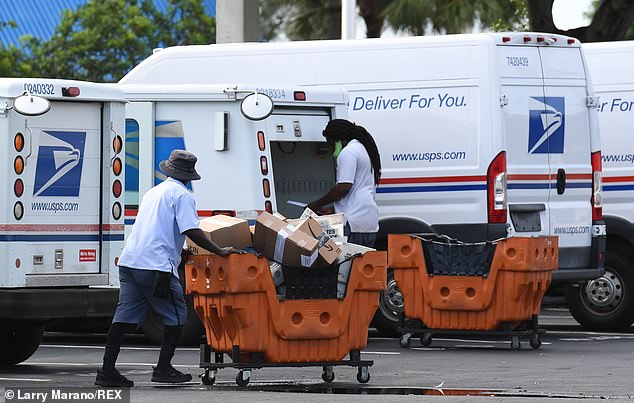 The US Postal Service sent a warning to all 50 states on Friday saying it cannot guarantee all mail-in votes will arrive in time to be counted, as it struggles amid cost-cutting and efficiency measures 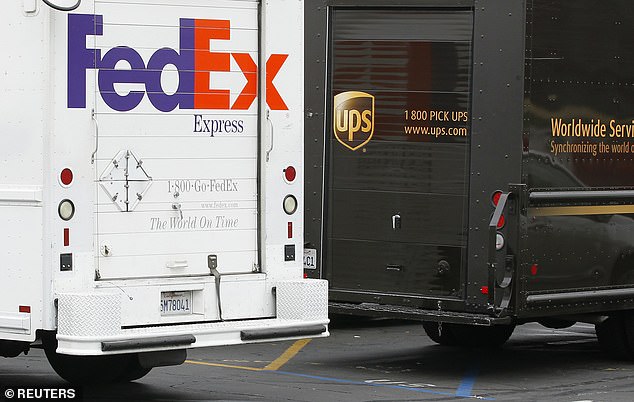 FedEx and UPS responded to social media calls suggesting they step in to deliver ballots, saying they are not authorized to carry them

In some states, collection would be prohibited because it would be considered ‘ballot harvesting,’ said Tammy Patrick, a former Arizona election official and senior advisor to the Democracy Fund foundation.

There are other hurdles that those companies, already coping with a pandemic-related surge in e-commerce shipments, would have to overcome.

For example, the Postal Service touches every US mailbox six days a week.

Private companies visit only when they have a delivery or an pre-arranged pickup – and they do not have blanket coverage in rural areas.

Amazon.com’s upstart delivery service has also been floated as an alternative. That service does not do residential pickups.

Representatives from Amazon and the Postal Service did not immediately respond to requests for comment.

‘Establishing a protocol of how they would collect the ballots would be a challenge,’ Patrick said.

Domestic costs would skyrocket since delivery firms charge significantly more for deliveries than the price of a 55-cent stamp, which is the cost to return many ballots.

And, international costs would be ‘astronomical,’ Patrick said.