President Donald Trump on Friday claimed not to have viewed images that established mass bomb suspect Cesar Sayoc was a fervent supporter of his, and bashed the ‘unfair’ media for its election coverage.

Asked about the arrest of the Trump-loving suspect, the president also tried to shift the narrative by pointing to the man who shot GOP Rep. Steve Scalise last year. The shooter was a supporter of liberal Vermont Sen. Bernie Sanders.

The president relied on understatement to describe the political posture of Sayoc, who lived in a van plastered with multiple images of the president and red targets over political enemies like Hillary Clinton.

‘I did not see my face on the van,’ said President Trump, describing the vehicle belonging to bomb suspect Cesar Altier Sayoc, accused of targeting Hillary Clinton, Barack Obama, and others

Trump said he ‘heard he was a person that preferred me over others’ when asked about Sayoc after his profile had already begun to emerge following his capture in a nationwide manhunt.

He spoke hours after Attorney General Jeff Sessions described Soyoc as a ‘partisan’ and FBI Director Christopher Wray described a plan to construct 13 IEDs, which were mail and delivered to Democrats including President Obama and Secretary of State Hillary Clinton along with other critics of the president.

Wray nevertheless declined to describe a motive at this early date.

Astonishingly, Trump claimed not to have same images – broadcast around the country – of the White van, which had stickers that said ‘CNN Sucks,’ multiple pictures of Trump, the GOP elephant, and multiple Democrats pictured in a ‘Drain the swamp’ portion.

‘I did not see my face on the van,’ said Trump. 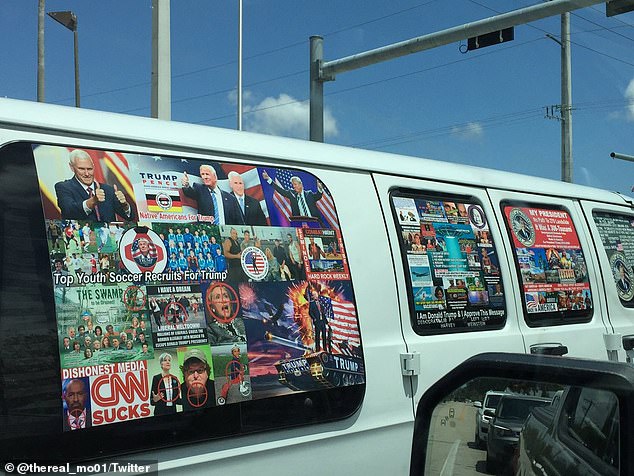 A driver snapped a photo of this van, believed to belong to Sayoc. The van is seen covered in stickers expressing support for Trump, and disdain for his liberal critics 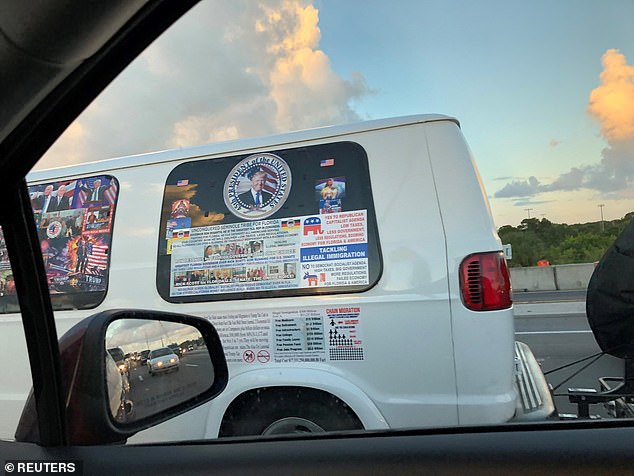 SEAL OF APPROVAL: The white van had pictures of President Trump’s face on multiple windows

Authorities covered the van in a blue tarp during transport as they continue their investigation.

The president, who has been under fire for his hot political rhetoric, including calling a Montana congressman who assaulted a reporter last year ‘my guy,’  also said he was not remotely responsible for the actions of the suspect.

Trump has called out political violence in the days since the proliferation of bombs and called for national unity.

In his brief remarks Friday before heading off to a campaign rally in Charlotte, Trump pointed to the shooting of the House Majority Whip a well-liked figure who has himself called out political violence of all kinds following the shooting.

Trump got asked if he was to blame and if it bothered him at all.

‘There’s no blame. There’s no anything. If you look at what happened to Steve Scalise, that was from a supporter of a different party,’ Trump said.

‘You look at what happened on numerous of these incidents, there were supporters of others. No. I’m just really proud of law enforcement. I think they did an incredible job,’ he added.

Scalise shooter James Hodgkinson, who severely injured the lawmaker, had ranted online about Republicans and was a supporter of Bernie Sanders, a candidate for the Democratic presidential nomination. Also shot were two Capitol police officers, a lobbyist, and an aide. 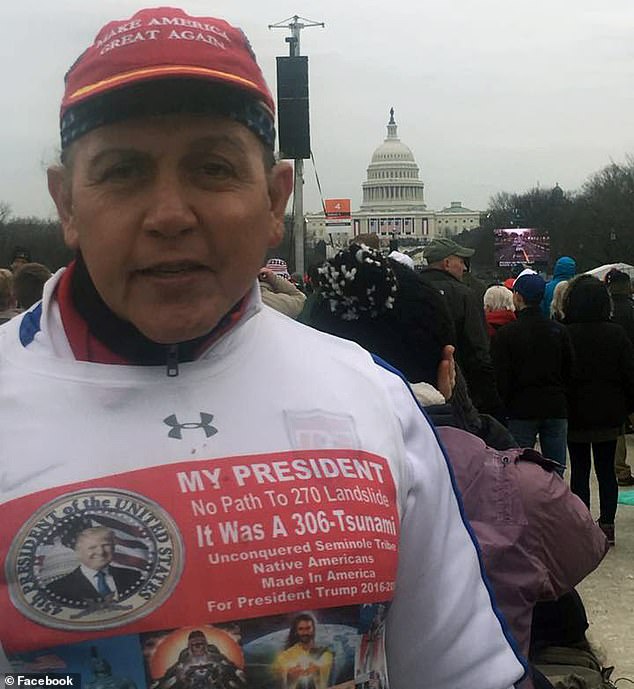 A number of hats with the American flag, the University of North Carolina logo and Trump’s Make America Great Again slogan could be seen on the dashboard of the van as it was transported away from the scene by law enforcement 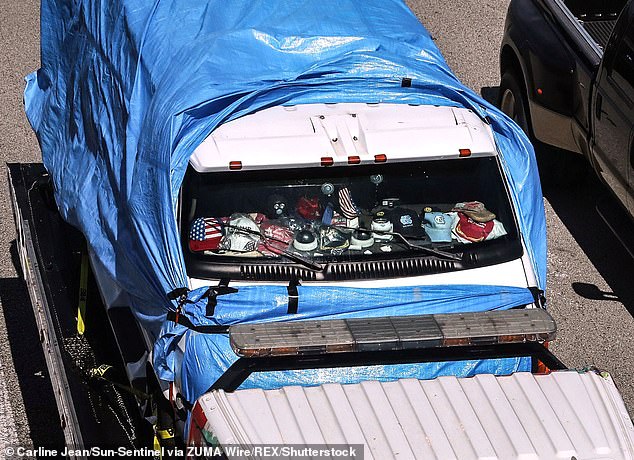 The van believed to be owned by bombing suspect Ceser Sayoc is transferred to the FBI Headquarter in Miramar Florida Man arrested in connection with mailing of suspicious packages, Plantation, Florida

Sanders said in a floor speech after the revelations that he was ‘sickened’ by the discovery.

‘I have just been informed that the alleged shooter at the Republican baseball practice is someone who apparently volunteered on my presidential campaign,’ Sanders said. 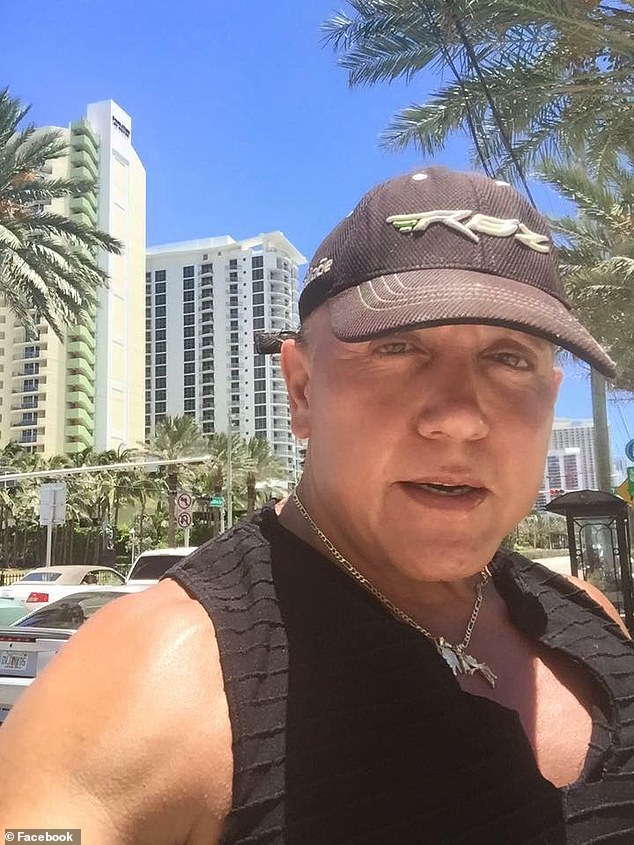 Cesar Altier Sayoc (PICTURED) who was taken into custody on Friday morning in Plantation, Florida in connection with the 12 suspicious packages that have been discovered this week. Dubbed the MAGA Bomber – his van was also seized adorned with images of both his democratic targets as well as support for President Trump and Mike Pence 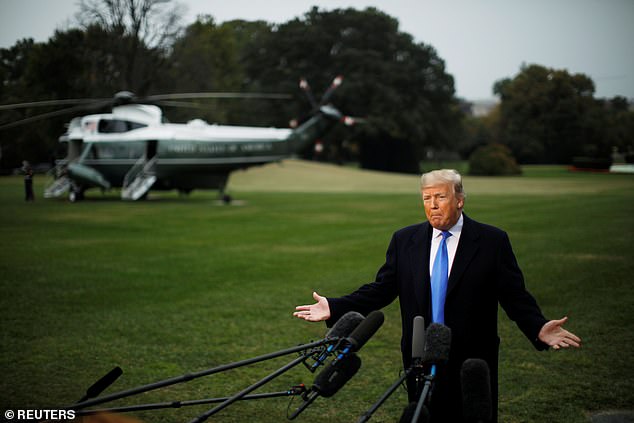 Trump went after the media and brought up the man who shot GOP Rep. Steve Scalise

1983-84: Attends the University of North Carolina in Charlotte

1995: Possession of crack cocaine and swindling over $500 (dropped)

1999: Possession of a stolen vehicle (dismissed)

‘I am sickened by this despicable act. Let me be as clear as I can be. Violence of any kind is unacceptable in our society and I condemn this action in the strongest possible terms. Real change can only come about through nonviolent action, and anything else runs against our most deeply held American values,’ Sanders added.

Hodkinson had written on Facebook: ”Trump Has Destroyed Our Democracy,” and: ‘It’s Time to Destroy Trump & Co.’

Cesar Altier Sayoc, 56, was taken into custody on Friday morning in Plantation, Florida in connection with the 14 suspicious packages that have been discovered this week.

According to Sayoc’s Facebook page, he is a Trump fan who posted pictures and videos of himself at one of the President’s rallies in October 2016.

He posted a photograph of himself wearing a MAGA hat in front of the U.S. Capitol in 2017.

He was a registered Republican and his politics appeared to revolve entirely around Trump, with no apparent political registration prior to the 2016 election.

A van impounded in Paradise, believed to be Sayoc’s, was covered densely with stickers expressing pro-Trump sentiments and denigrating prominent Democrats, including Hillary Clinton and Barack Obama, who were among those who had pipe bombs addressed to them this week.

Another sticker proclaimed ‘CNN Sucks.’ The cable network had two of the suspicious packages addressed to its headquarters in Manhattan.

Attorney General Jeff Sessions said at his Friday press conference that Sayoc ‘appears to be a partisan’ but declined to comment further on a possible motive.

‘This is a law and order administration. We will not tolerate such lawlessness, especially political violence,’ Sessions said.

Sayoc is charged with five federal crimes, including interstate transportation of an explosive, illegal mailing of explosives, threats against a former president, threatening interstate communications, and assaulting current and former federal officers.

Asked at the White House whether he would tone down his rhetoric, Trump responded: ‘Well, I think I’ve been toned down, if you want to know the truth. I could really tone it up, because the media has been extremely unfair to me and to the Republican Party.’

Asked to elaborate, Trump said: ‘I think the media has been very, very unfair in terms of the Republican Party and the way it’s been covered. And they understand that. They write articles about that. Many of them admit that. But the media has been unbelievably unfair to Republicans, conservatives, and certainly to me.