President Trump denied he believed he was the underdog in the race for the White House against Joe Biden after spending an hour Tuesday in the White House Rose Garden panning the presumptive Democratic nominee’s plans.

‘No I don’t,’ the president responded after a reporter asked him if he saw himself losing in the fall. ‘I think we have really good poll numbers.’

The president then pointed to shows of support among boaters and bikers.

‘You look at the intercoastal in Florida, you look at the lakes you see thousands of boats with Trump signs, American signs, you’ve got the Trump-Pence sign all over,’ Trump said. ‘You look at bikers for miles and miles riding up highways proudly with their signs.’

President Trump said he wasn’t the underdog in the 2020 presidential race, pointing to shows of support among bikers and boaters. The president spent more than an hour Tuesday in the White House Rose Garden, attacking Joe Biden throughout his remarks 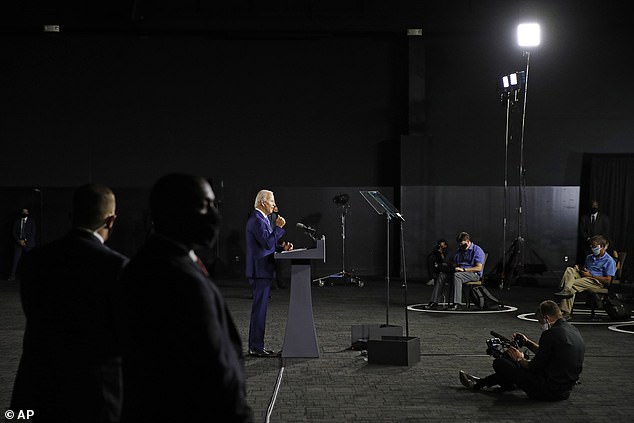 Hours earlier, Joe Biden appeared in Wilmington, Delaware and panned the president’s coronavirus response. He also made fun of some of the statements President Trump had made about green energy, including that windmills caused cancer 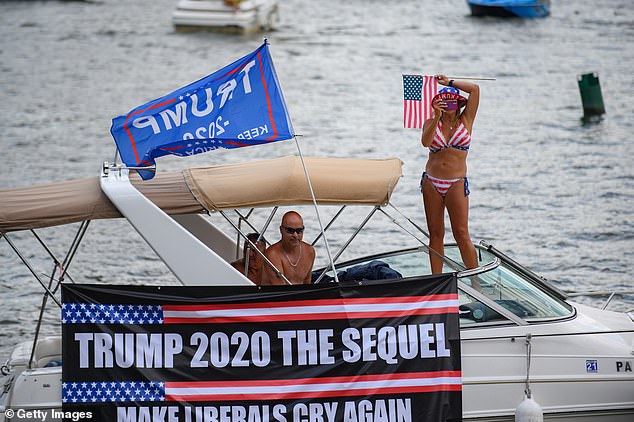 President Trump pointed to all of the boaters who have Trump flags on their boats. While the president referenced supporters in Florida, this boat was captured on the Allegheny River in Pittsburgh, Pennsylvania, an important swing state 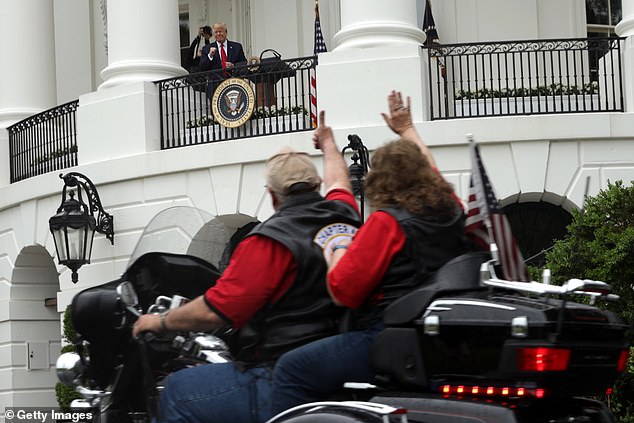 The president also talked about the support he had from bikers. Over the Memorial Day weekend, President Trump invited a number of bikers to the White House to show that he supported them in return

The question was prompted after Trump announced an un-scheduled 5 p.m. press conference at 1:44 p.m., right as Biden was about to speak.

Biden was rolling out a $2 trillion plan to combat climate change while also build up the U.S.’s clean energy infrastructure.

The former vice president started off his Wilmington event by criticizing the president’s coronavirus response.

Later he made fun of some of the statements Trump has made about clean energy sources.

‘When Donald Trump talks about improving efficiency by retro-fitting lighting systems with LED bulbs – remember what he said? He said he doesn’t like LED because quote- “the light’s no good, I always look orange,’ Biden added.

Trump then took to the Rose Garden podium in what Bloomberg had reported was to be a China-centric press conference.

It did start with China, but quickly veered into a diatribe about Biden, who Trump cast as cozy with the Chinese communist party.

‘In contrast, Joe Biden’s entire career has been a gift to the Chinese communist party and to the calamity of, of errors that they’ve made, they’ve made so many error,’ the president said at the beginning of his assault.

Throughout his one hour and four minute appearance, Trump also brought up Biden’s son Hunter, who had business dealings with the Chinese.

Trump then started picking through the Biden campaign’s 110-page document of policy prescriptions, going after the Democrat on climate change, police reform and immigration.

The political attack gave the impression Biden was taking up significant space in Trump’s head.

But Trump insisted that 2020 looked a lot like 2016 – pointing to the crowds he attracted, while also pushing that there was a secret Trump vote.

The president mentioned his June trip to Maine.

‘We went up there recently there were crowds, thousands of people lined up going over to a factory where we were opening up for making swabs, a beautiful big new factory making swabs,’ the president said.

Thousands did line the streets for Trump’s motorcade. The vast majority were supporters, but a number of ‘Black Lives Matter’ protesters came out too.

The president said his supporters didn’t want to admit to supporting him because of unfair media treatment.

‘The media doesn’t treat us fairly, they never have and perhaps they never will,’ the president complained. ‘But maybe they will when we turn this around for a second time and it’s going to happen very quickly,’ he said, likely referencing the economy.

The president again shared concerns about mail-in voting, alleging there would be fraud.

He previously had tweeted that he worried that widespread mail-in voting would lead to Republican losses.

But then he also said that he believed Trump supporters made up a majority of Americans.

‘I think you have a silent majority the likes of which this country has never seen before,’ Trump said.