Trump says he wants Barron back in the classroom

‘I’ve got a young son I’d like to go to school!’ Donald Trump says he wants Barron back in the classroom and laments ‘I’ve been in the White House for months’

President Trump said Friday he’d like to see 14-year-old Barron back in the classroom – and he’d like to travel outside the White House, as he lamented coronavirus closures.

He had been asked by a reporter what the government planned to do in the scenario that workers are allowed to start working again but schools remained closed. 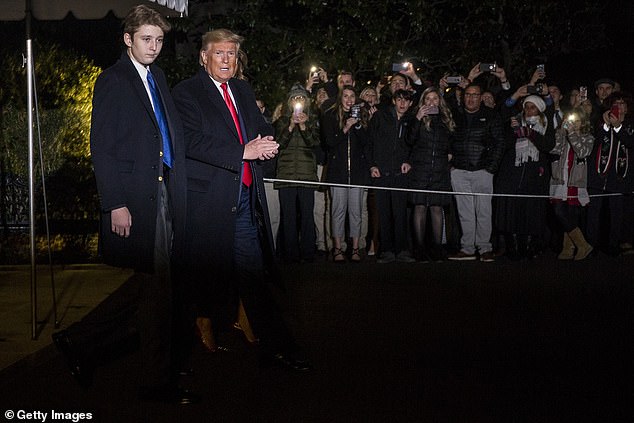 ‘It’s very nice,’ President Trump (right) said, that Barron gets to be at home, ‘but we’d like to see him go to school’

‘I think the schools are going to be open soon,’ Trump optimistically answered.

The three-phase plan the White House rolled out Thursday keeps schools closed through phase one of the plan being deployed, but workers are able to slowly return to workplaces.

This could cause a headache for working parents who usually have children in school during the work-week.

The president never specifically answered the question, segueing to talk about an economic rebound instead.

While Barron’s been stuck at home the president has been too.

‘I’ve been in the White House for months,’ he said. ‘I don’t know what it is but it’s been months.’

‘Other than I did leave to, to say goodbye to a beautiful ship,’ the president said.

Before that, Trump had spent a weekend away at Mar-a-Lago and then a day in Orlando for fundraising and returned to the White House on Monday, March 9.

Since then he’s been focused on combating the coronavirus pandemic.

On Friday he expressed he’d like to go back on the campaign trail soon, but didn’t divulge a timeline.

‘It’s great for the country,’ he said, adding, however, that he wasn’t a fan of doing rallies with social distancing practices. ‘It loses a lot of flavor.’