Trump said Friday that he would be campaigning for Cruz after the Republican’s home state was noticeably left off the White House’s list of fall targets.

‘I will be doing a major rally for Senator Ted Cruz in October. I’m picking the biggest stadium in Texas we can find,’ Trump tweeted. ‘As you know, Ted has my complete and total Endorsement. His opponent is a disaster for Texas – weak on Second Amendment, Crime, Borders, Military, and Vets!’ 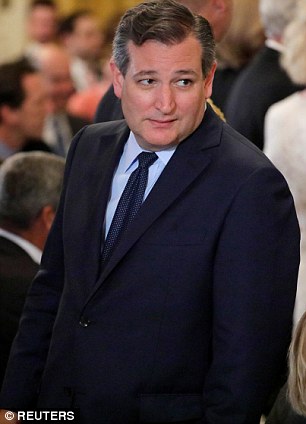 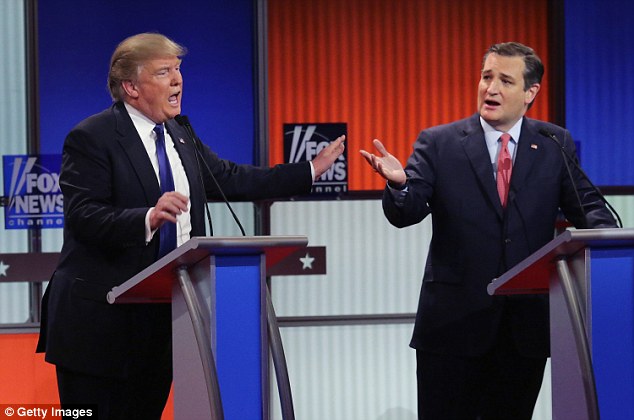 The two men had an especially nasty fight on the campaign trail about Cruz’s father, Rafael 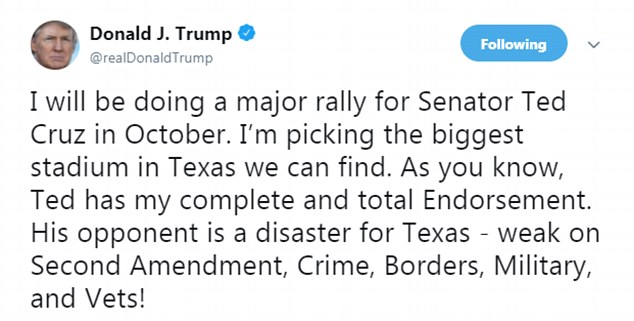 Cruz had all but begged Trump to campaign for him in Texas, where he’s been the junior senator since 2012.

‘I would certainly welcome his support, and I hope to see him in Texas,’ he said, according to the Dallas Morning News, last month.

The freshman senator told the Houston Chronicle he’d spoken to the president about campaigning for him ahead of the mid-terms.

‘I think we are likely to see the president down in Texas before the election,’ he said.

Cruz’s home state was missing from the White House’s list of targeted races, however, casting doubt that Trump would come to Cruz’s rescue.

The two men had an especially nasty fight on the campaign trail about Cruz’s father, Rafael.

‘His father was with Lee Harvey Oswald prior to Oswald’s being — you know, shot. I mean, the whole thing is ridiculous,’ Trump told Fox News. ‘What is this, right prior to his being shot, and nobody even brings it up. They don’t even talk about that. That was reported, and nobody talks about it.’

Trump was parroting a National Enquirer story that claimed Cruz’s father was paling around with John F. Kennedy’s killer.

Cruz’s campaign called it ‘another garbage story in a tabloid full of garbage’ at the time to the Miami Herald.

The Texas senator was the last man standing in the race against the businessman.

In a desperate attempt to knock Trump out in the final days of the race, Cruz called him a ‘serial philanderer,’ a ‘pathological liar,’ a ‘narcissist’ and ‘utterly amoral.’

They mended fences after the race, and Trump endorsed Cruz and a line-up of other politicians this spring at the National Rifle Association’s convention in Dallas.

The president’s promise to campaign for his 2016 opponent in an unusually competitive general election race dovetails comparisons of Cruz’s opponent, Beto O’Rourke, to a young Barack Obama. 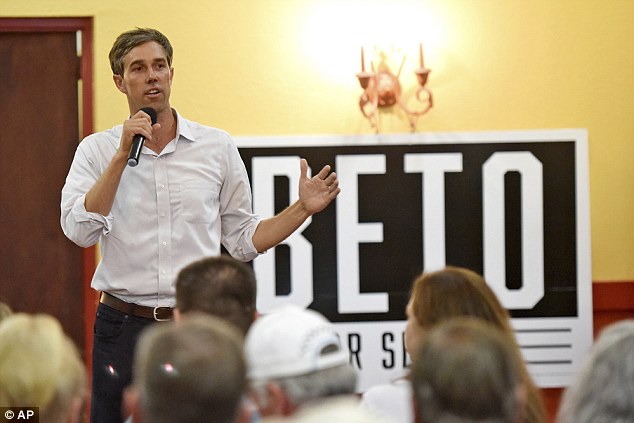 The president’s promise to campaign for his 2016 opponent in an unusually competitive general election race dovetails comparisons of Cruz’s opponent, Beto O’Rourke, to a young Barack Obama

An article making the rounds suggested that O’Rourke could challenge and beat Trump in 2020.

‘O’Rourke offers not just a path to victory in Texas but an antidote to the entire stupid artifice of American politics in the Trump era,’ Snapchat head of news Peter Hamby wrote this week in Vanity Fair. ‘He’s authentic, full of energy, and stripped of consultant-driven sterility. On what planet is Beto O’Rourke not a presidential contender, even if he loses?’

Cruz is beating O’Rourke by an average of five points, according to Real Clear Politics. An Emerson poll last week put the race much closer, however.

The incumbent senator polled at 39 percent to his challenger’s 38 percent in the survey with a 4.4 percent margin of error.