President Donald Trump said Tuesday he was ‘very, very happy’ with a ‘no collusion’ finding by Republicans on the House Intelligence Committee – although he miscast the finding as being from the entire bipartisan panel.

Trump spoke about the issue a day after House Republicans announced they had reached the conclusion in their own draft report, and were suspending interviews of witnesses in their Russia probe. Panel Democrats did not sign off on the draft.

‘We’re very happy with the decision by the House intelligence committee saying there’s absolutely no collusion with respect to Russia,’ Trump told reporters, referring to committee wracked by partisan discord in its entirety.

‘And it was a very powerful decision, a very strong decision, backed up – I understand they’re going to be releasing hundreds of pages of proof and evidence – but we are very, very happy with that decision,’ Trump continued. ‘It was a powerful decision that left no doubt, so I want to thank the House intelligence committee and all of the people that voted,’ Trump said.

His comment came after the panel’s top Democrat, Rep. Adam Schiff, had already admonished him on Twitter for having said the committee had found ‘NO EVIDENCE OF COLLUSION OR COORDINATION.’

In the clear – from Republicans: Republicans on the House intelligence committee have completed a draft report concluding there was no collusion or coordination between Donald Trump’s presidential campaign and Russia.

‘This was not the finding of the House Intelligence Committee, Mr. President, but only a statement by its GOP members, who lack the courage to stand up to a President of their own party when the national interest necessitates it,’ Schiff wrote in response to Trump’s own tweet on the subject.

That exchange came after Republicans on the House intelligence panel said they are ending their probe of Russian interference in the elections and have finished a draft report concluding there was ‘no collusion. 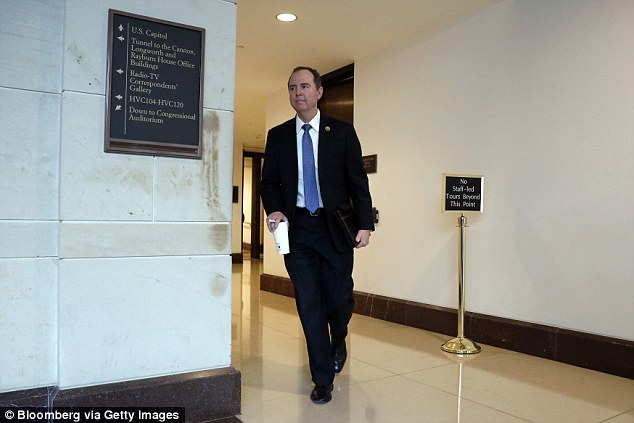 NOT SO FAST: Democratic Rep. Adam Schiff scolded Trump: ‘This was not the finding of the House Intelligence Committee, Mr. President, but only a statement by its GOP members’

Schiff, for his part, wrote that the ‘GOP just shut down House Intel investigation, leaving questions unanswered, leads unexplored, countless witnesses uncalled, subpoenas unissued.’ In a statement he called it a ‘capitulation to the executive branch.

‘Thirteen Russians have been indicted in a far reaching conspiracy in which the Russians sought to influence our election by helping Donald Trump, hurting the Hillary Clinton campaign and sowing discord in the United States. Most significant, high-ranking Trump campaign and Administration officials have also been indicted, including the President’s national security advisor, his campaign chair and deputy campaign chair, as well as one of his foreign policy advisors, and three of those have already pled guilty,’ Schiff wrote.

‘If the Russians do have leverage over the president of the United States, the majority has simply decided it would rather not know,’ Schiff said.

The GOP panel members’ conclusion is a stark departure with what the Intelligence Community found in a report issued in January of 2017 that Russia interfered in the elections and had a ‘clear preference’ for Trump. 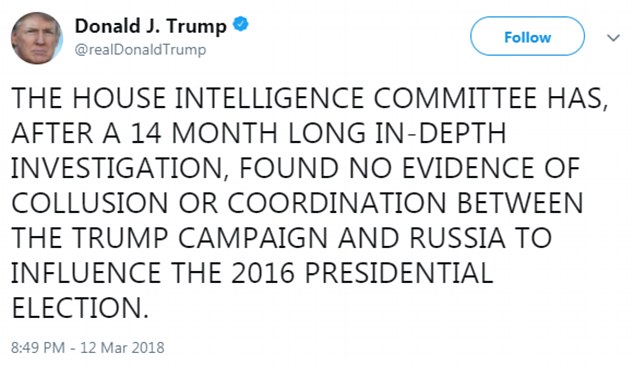 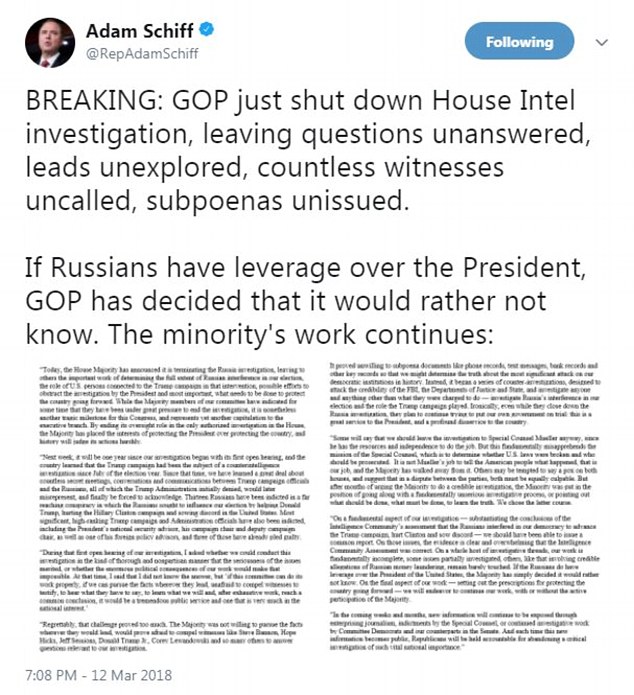 Schiff said Russia may have ‘leverage’ over Trump 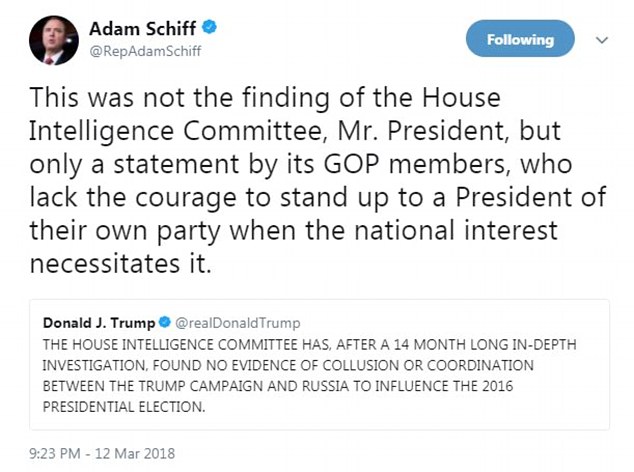 Rep. Schiff responded to an earlier claim by Trump noting the report was drafted only by Republican members and staff

The draft report concludes there was no collusion or coordination between Donald Trump’s presidential campaign and Russia.

Trump tweeted in capital letters to celebrate the findings. He wrote Monday night: ‘THE HOUSE INTELLIGENCE COMMITTEE HAS, AFTER A 14 MONTH LONG IN-DEPTH INVESTIGATION, FOUND NO EVIDENCE OF COLLUSION OR COORDINATION BETWEEN THE TRUMP CAMPAIGN AND RUSSIA TO INFLUENCE THE 2016 PRESIDENTIAL ELECTION.’

After a yearlong investigation, Texas Rep. Mike Conaway says the committee has finished conducting dozens of witness interviews and will share the report with Democrats on Tuesday.

‘We found no evidence of collusion,’ Conaway said.

Conaway is the Republican leading the House probe.

The public will not see the report until Democrats have reviewed it and the intelligence community has decided what information can become public, a process that could take weeks. Democrats are expected to issue a separate report with much different conclusions.

Conaway said the panel’s probe found some ‘bad judgement,’ but no collusion.

‘That meeting should never have taken place,’ Conaway said. ‘But we can’t find anything that leads us to a collusion string.’

‘We found perhaps some bad judgment, inappropriate meetings, inappropriate judgment in taking meetings — but only Tom Clancy could take this series of inadvertent contacts, meetings, whatever, and weave that into some sort of a spy thriller that could go out there.’ 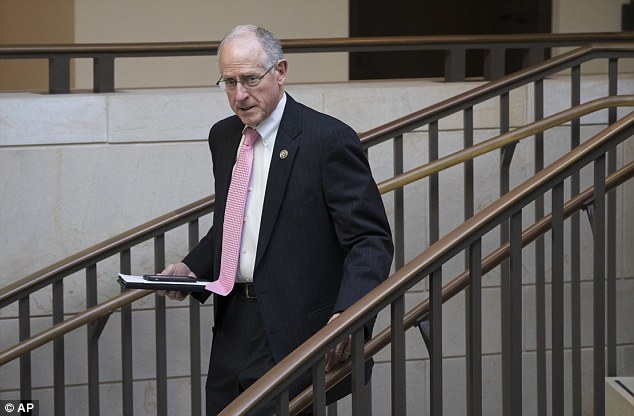 ‘NO COLLUSION’:  Rep. Mike Conaway, R-Texas said: ‘We found no evidence of collusion’ in the investigation 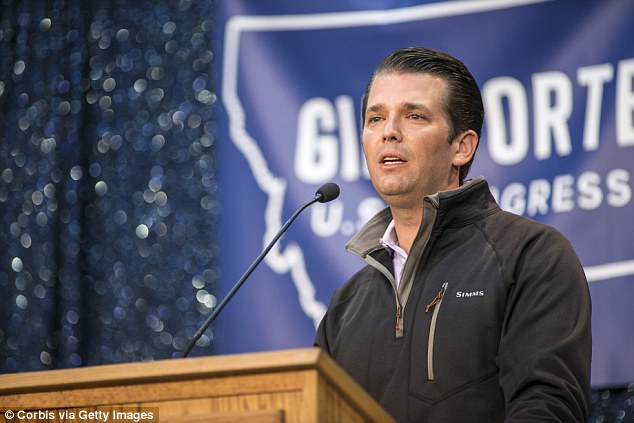 Donald Trump Jr.’s Trump Tower meeting with Kremlin-linked lawyer ‘should never have taken place,’ said Conaway, although the GOP-run panel appears to have accepted his claim of privelege

He also said of the committee: ‘We couldn’t establish the same conclusion that the CIA did that they specifically wanted to help Trump,’ he said, The Hill reported.

That failure is distinctly at odds with what the Intelligence Community found in a joint report issued shortly after the elections.

According to the IC report: ‘The Intelligence Community found in their January 2017 report: ‘We assess Russian President Vladimir Putin ordered an influence campaign in 2016 aimed at the US presidential election. Russia’s goals were to undermine public faith in the US democratic process, denigrate Secretary Clinton, and harm her electability and potential presidency. We further assess Putin and the Russian Government developed a clear preference for President-elect Trump. We have high confidence in these judgments.’

‘We also assess Putin and the Russian Government aspired to help President-elect Trump’s election chances when possible by discrediting Secretary Clinton and publicly contrasting her unfavorably to him,’ the report found. 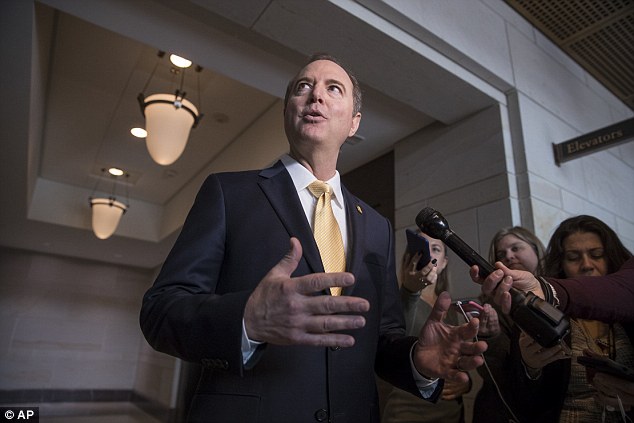 OUT OF THE LOOP: Rep. Adam Schiff, D-Calif., ranking member of the House Permanent Select Committee on Intelligence has yet to receive the Republican-drafted report

Panel chairman Devin Nunes of California issued a statement that thanked only Republican members of his panel – a sign of the partisan strife that has broken out there.

‘After more than a year, the Committee has finished its Russia investigation and will now work on completing our report. I’d like to thank Congressmen Trey Gowdy, Tom Rooney, and especially Mike Conaway for the excellent job they’ve done leading this investigation,’ Nunes said.

‘I’d also like to recognize the hard work undertaken by our other Committee members as well as our staff. Once the Committee’s final report is issued, we hope our findings and recommendations will be useful for improving security and integrity for the 2018 midterm elections.’

Republicans and Democrats on the panel recently issued competing memos about the FBI’s conduct in the Russia and Hillary Clinton probes.

Conaway said he expects Democrats to make changes to the report – although finding anything close to agreement on the fractured panel would be extremely challenging. 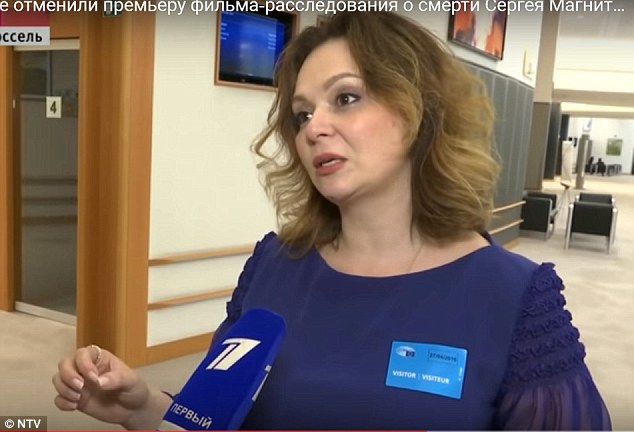 In addition to backing up Trump’s ‘no collusion’ claim, the report puts forward the president’s argument that the Clinton camp had Russia ties – by way of the Steele Dossier, which ex British intelligence officer Christopher Steele drafted on contract with political intelligence firm Fusion GPS based on his own research, which included Russian sources of information.

The Republican draft will look at ‘how anti-Trump research made its way from Russian sources to the [Hillary] Clinton campaign,’ Conaway said, in an apparent reference to the dossier.

‘We will say that there was an attempt to use foreign sources with respect to the Clinton campaign,’ he continued.

‘It was clear that it there was — at least Steele and however much he talked and didn’t talk to Russians — that’s foreigners and that information was paid for by the DNC and the Clinton campaign,’ Conaway said. He also added:  ‘I don’t have any direct evidence that they knew about it.’

Conaway’s statements also are at odds with the indictments of 13 Russians handed down by Mueller’s office last month.

According to the indictments, which reference the online information campaign carried out from a notorious St. Petersburg Russia troll farm, ‘Defendants posted derogatory information about a number of candidates, and by early to mid-2016, Defendants’ operations included supporting the presidential campaign of then-candidate Donald J. Trump (‘Trump Campaign’) and disparaging Hillary Clinton.’

Rep. Adam Schiff, D-Calif., the top Democrat on the House Permanent Select Committee on Intelligence panel, has yet to receive the Republican-drafted report Monday and hadn’t been told as of Monday afternoon that the GOP had decided to end the interview portion of the probe, CNN reported.