Trump says House Democrats have turned into Venezuela on steroids

President Donald Trump has called House Democrats ‘Venezuela on steroids’ after they voted to repeal his administration’s controversial travel ban.

‘The Democrats in the House are trying to undo my big win Travel Ban Bill, which successfully keeps very bad and dangerous people out of our great Country,’ Trump tweeted on Saturday from his golf club in Bedminster, New Jersey.

‘Passed along party lines. Hopefully, will be DEAD in the Senate! The Dems have gone Stone Cold Left – Venezuela on steroids!’

The House on Wednesday voted to repeal the Trump administration’s travel ban and further restrict the president’s power to limit entry to the U.S. 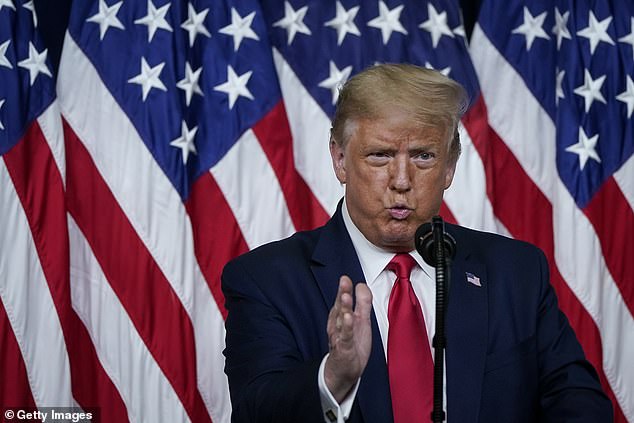 The bill, which passed the Democrat-controlled House 233-183, had initially been slated for action in March, before the coronavirus forced scheduling changes on Capitol Hill.

The measure is unlikely to advance in the Republican-controlled Senate, where it has no GOP support. But the bill’s passage by the House still elated advocates who had long pushed for formal action against a travel ban that they see as discriminatory.

‘This is a historic moment for Muslims,’ Farhana Khera, executive director of Muslim Advocates, one of the groups working in support of the bill, said ahead of the vote.

Passage of the NO BAN act will ‘show Muslims, who have been banned and scapegoated by the Trump administration, that we deserve rights and dignity,’ Khera added.

Among House Democrats who voted, all supported the bill, while two Republicans among those voting crossed the aisle to vote yes: Texas Rep. Will Hurd and Pennsylvania Rep. Brian Fitzpatrick.

The White House noted its opposition to the bill in March, saying in a statement that undoing the travel ban ‘would harm the national security of the United States’ and that the ban has been ‘central to the Administration´s ongoing efforts to safeguard the American people against the spread of COVID-19.’ 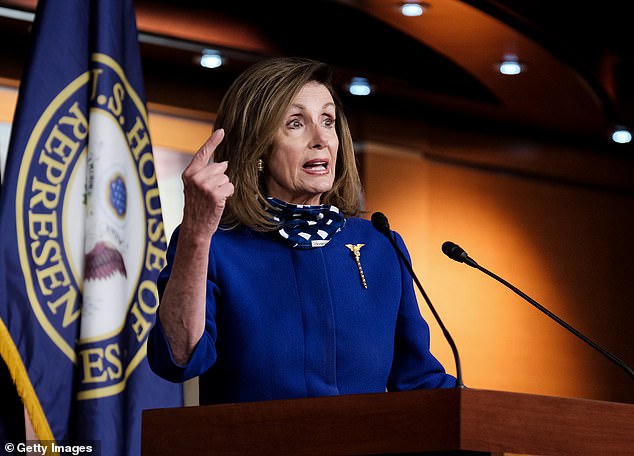 House Speaker Nancy Pelosi is seen on Friday. The House on Wednesday voted to repeal the travel ban and further restrict the president’s power to limit entry to the U.S.

In debate ahead of the vote, Democrats repeatedly blasted the travel ban that President Donald Trump first imposed in January 2017. They called it biased against Muslims, whose entry into the country Trump first suggested blocking during his 2016 White House run.

‘It will be a proud day for this Congress when we invalidate the president´s infamous and ugly attempt to scapegoat people based on their religion,’ Rep. Jamie Raskin, D-Md., said during floor debate ahead of the final vote.

The legislation goes beyond overturning Trump´s travel ban, which was retooled amid legal challenges and upheld by the Supreme Court in 2018.

The latest version of the ban affects travel from five majority-Muslim nations – Iran, Somalia, Yemen, Syria and Libya – in addition to North Korea and some Venezuelan government officials and their families.

In addition to overturning the travel ban, the bill the House passed also prohibits religious discrimination in the application of immigration law and constrains the executive branch´s ability to limit entry to the U.S. by certain groups of people.

Conservatives defended Trump’s actions. Rep. Andy Biggs, an Arizona Republican, said during floor debate that Trump´s restrictions on travel are ‘not a Muslim ban’ but rather a ‘legitimate travel restriction implemented for the safety of this nation.’

He criticized Democrats for relying on a ‘straw man argument’ about religious discrimination while crafting a bill that more broadly restricts presidential authority.

Trump earlier this year added new immigration curbs from six other nations, including majority-Muslim Kyrgyzstan and Sudan, as well as Nigeria, which has the world´s fifth-largest Muslim population, according to the Pew Research Center.

Trump’s Democratic rival in the upcoming presidential election, former Vice President Joe Biden, vowed Monday to rescind Trump’s travel ban ‘on day one’ if he’s elected. He made the pledge in remarks to a summit focused on Muslim voter turnout. 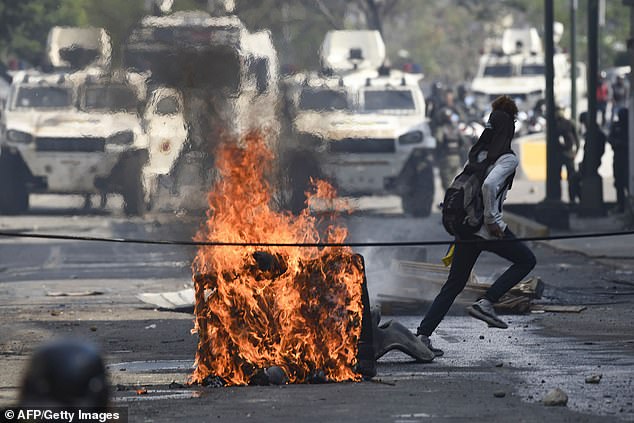 Muslim American and other civil rights advocates have said Wednesday´s vote in the House would help them keep the pressure on for a future rollback of the policy.

The bill’s passage represents ‘a huge step forward for Muslims, Africans, immigrants, and everyone who wants to ensure that future presidents cannot use rank prejudice to issue discriminatory bans,’ said Manar Waheed, senior legislative and advocacy counsel at the American Civil Liberties Union, before the vote.

Meanwhile, the United States on Thursday imposed sanctions on two Venezuelans over accusations they helped support the government and son of Venezuelan President Nicolas Maduro, the latest actions by Washington targeting the socialist leader.

The Treasury also said that the two brothers are central figures in Venezuela’s gold industry and oversee the financial mechanism of an illicit gold scheme involving the Venezuelan president’s son, also named Nicolas Maduro, who has previously been blacklisted by Washington.

Thursday’s action freezes any U.S. assets of the brothers and generally prohibits Americans from doing business with them.

‘The United States is committed to targeting individuals who facilitate and enable this corrupt regime as they continue to ignore the welfare of the Venezuelan people,’ Treasury Secretary Steven Mnuchin said.

The United States and dozens of other countries have recognized opposition leader Juan Guaido as Venezuela´s legitimate president, regarding Maduro´s 2018 re-election as a sham. But Maduro has remained in power, backed by the country´s military and by Russia, China and Cuba.