President Donald Trump brushed off an impeachment campaign on Friday morning that’s been levied against him by liberal activist Tom Steyer.

‘Wacky & totally unhinged Tom Steyer, who has been fighting me and my Make America Great Again agenda from beginning, never wins elections!’ he said.

Steyer has poured his wealth into a variety of political efforts, mostly focused on stopping climate change. He was a major donor to and fundraiser for Hillary Clinton and Barack Obama’s presidential campaigns.

The California billionaire says he will dump at least $10 million into a national television advertising campaign against the Republican president. 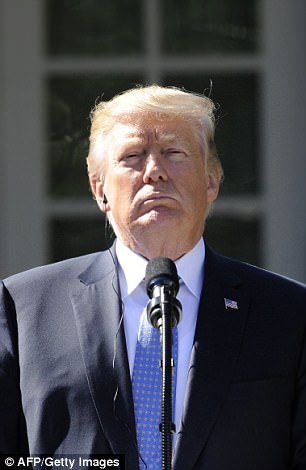 In an ad that’s already been posted to the web, Steyer argues Trump should be ousted from office because he has edged the country toward nuclear war, obstructed justice at the FBI and threatened to shut down news organizations he does not like. He urges viewers to call their members of Congress and tell them to bring articles of impeachment.

‘People in Congress and his own administration know this president is a clear and present danger who is mentally unstable and armed with nuclear weapons,’ Steyer says in the ad.

‘And they do nothing.’

Steyer plans to spend eight figures to air the television ads nationally, but he would not give an exact amount.

His investment comes as he considers running against U.S. Sen. Dianne Feinstein, a fellow Democrat, and as Democrats in Washington argue over whether efforts to impeach Trump are smart or worthwhile.

Trump claimed Friday that Steyer ‘never wins elections.’ But a 2010 campaign to defeat Prop. 23, an initiative to suspend landmark global warming legislation in California, that Steyer put $5 million of his own money toward defeating went down by a more than 20-point margin.

Steyer also raised money for and donated to Obama, who twice won the White House. It was his bids to put Hillary Clinton in the Oval Office that were unsuccessful. She lost to Obama in 2008 in the Democratic primary and Trump just last year in the general election.

The president was most likely referring to Steyer’s NextGen Climate Action PAC, which the hedge funder poured $67 million into in the 2014 midterm elections for en embarrassingly low rate of return on his investment. A mere 40 percent of his candidates beat their opponents at the ballot box.

A $5 million donation to the Democratic Senate Majority PAC that year did not ultimately give his party control of the upper chamber, either.

Steyer’s $1.8 million effort to make Massachusetts’ Democrat Ed Markey a senator did pan out, Forbes reported, as did an effort to put Virginia Gov. Terry McAuliffe into office in 2013.

In 2016, Steyer put forward his grandest sum yet – $87.6 million – to propel Democratic candidates, including Clinton, into office and failed once again. Just three of the seven politicians he supported through NextGen won their races, according to the Washington Times.

His support for the winner of North Carolina’s gubernatorial race in 2016 brought his win-rate up to 50-50, the newspaper said.

Steyer’s activism has had mixed results, and the Republican National Committee said it’s not overly concerned about his current project.

‘If Democrats want to appease the far left and their liberal mega-donors by supporting a baseless, radical effort that the vast majority of Americans disagree with, then have at it,’ said Michael Ahrens, a spokesman for the Republican National Committee.

Republicans will focus on ‘issues voters actually care about,’ such as the economy and cutting taxes, Ahrens said.

The White House did not immediately respond to a request for comment.

Steyer has also said he will spend seven figures on an accompanying digital ad campaign to impeach Trump.

An impeachment resolution brought last week by Democratic U.S. Rep. Al Green of Texas died before coming up for a vote. Green has vowed to try again.

Other Democrats such as House Minority Leader Nancy Pelosi of California think impeachment attempts are not worthwhile because they will fail in the Republican-led Congress and could energize GOP voters heading into the next election.