President Trump on Saturday said that Robert Mueller ‘put on the greatest display of ineptitude and incompetence that the Halls of Congress have ever seen.’

‘The Democrats were trying mightily to revive the badly and irrevocably tarnished Witch Hunt Hoax until’ Mueller’s testimony before two House committees on Wednesday, the president tweeted on Saturday.

‘Truth is, he had no facts on his side,’ Trump tweeted.

‘Nothing he could do!’

Trump heartily declared victory even though Mueller, the former special counsel who investigated alleged Russian meddling in the 2016 election, emphasized on Wednesday he had not exonerated Trump of obstruction of justice, as the president has claimed. 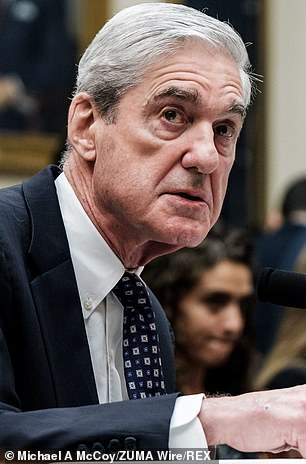 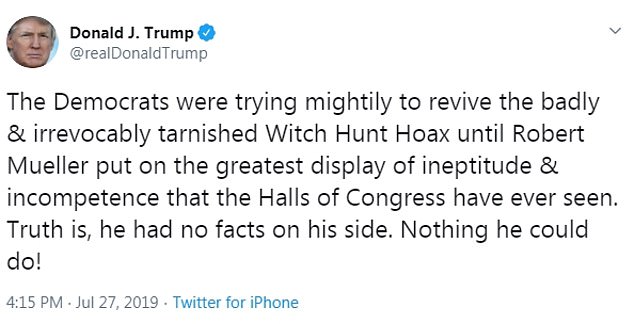 ‘The Democrats were trying mightily to revive the badly and irrevocably tarnished Witch Hunt Hoax until’ Mueller’s testimony before two House committees on Wednesday, the president tweeted on Saturday

Throughout Saturday, Trump continued tweeting about the Mueller investigation and the prospect of impeachment.

‘The Dems are now coming out of shock from the terrible Mueller performance, and are starting to spin impeachment all over again,’ the president tweeted on Saturday.

‘How sick and disgusting and bad for our country are they.

‘What they are doing is so wrong, but they do it anyway. Dems have become the do nothing Party!’

Later on Saturday, Trump tweeted: ‘We gave Nadler and his Trump hating Dems the complete Mueller Report (we didn’t have to), and even Mueller himself, but now that both were a total BUST, they say it wasn’t good enough.

‘Nothing will ever be good enough for them. Witch Hunt!’

In seven hours of congressional testimony, Mueller accused Trump of not always being truthful, called his support for the 2016 release of stolen Democratic emails ‘problematic’ and said Russia would again try to interfere in the 2020 U.S. elections.

‘They are doing it while we sit here. And they expect to do it in our next election,’ Mueller told lawmakers in back-to-back hearings on his inquiry into Russian interference in the 2016 U.S. election to boost Republican Trump’s candidacy.

Despite Mueller’s assertion that Trump could be indicted after leaving office, the president was triumphant after the former FBI director’s appearances before the Democratic-controlled House of Representatives Judiciary and Intelligence committees.

‘This was a very big day for the Republican Party. And you could say this was a great day for me, but I don’t even like to say that,’ Trump said after Mueller’s lengthy and at times halting testimony during which he sometimes could not hear questions and had to correct at least one answer. 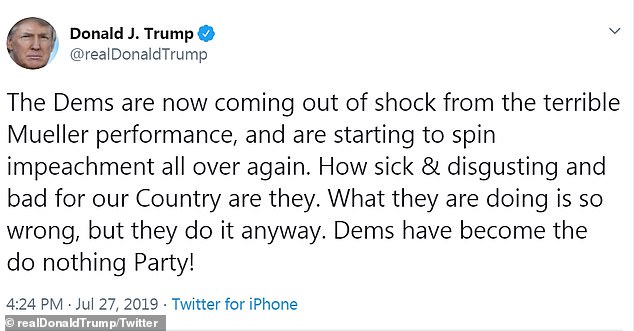 ‘The Dems are now coming out of shock from the terrible Mueller performance, and are starting to spin impeachment all over again,’ the president tweeted on Saturday

Later on Saturday, Trump tweeted: ‘We gave Nadler and his Trump hating Dems the complete Mueller Report (we didn’t have to), and even Mueller himself, but now that both were a total BUST, they say it wasn’t good enough.’ 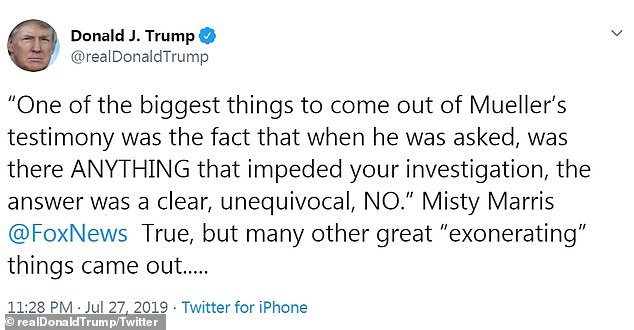 During a day of high-stakes political theater, Mueller, 74, answered questions publicly for the first time on his investigation, with Democrats and Republicans taking familiar positions at a time of deep U.S. partisan divisions.

The marathon televised hearings apparently left Democrats who control the House no closer to launching the impeachment process to try to remove the president even as he seeks re-election in 2020.

Mueller, for his part, refused to discuss the ‘impeachment issue.’

Meanwhile, the House Judiciary Committee asked a federal court on Friday for access to grand jury evidence from the Mueller probe that lawmakers say they need to determine whether to begin impeachment proceedings against Trump.

The action moved the House one step closer to impeachment, a politically contentious issue that has divided Democrats as Congress prepares to pivot to the 2020 election season.

‘We have just given notice that we are actively considering articles of impeachment … that is as serious a step as we should take at this time,’ an attorney for the committee told reporters during a background briefing held after the filing.

A separate committee lawsuit expected early next week to compel McGahn to testify before the panel will also cite the need to decide on impeachment, though McGahn could avoid court action by agreeing to appear as a result of negotiations, aides said.

The grand jury evidence, which is protected from outside scrutiny by federal law, was compiled by Mueller’s 22-month probe of Russian meddling in the 2016 presidential election and Trump’s efforts to impede the investigation.

House Judiciary Committee Chairman Jerrold Nadler told a news conference that since Justice Department policy prohibits prosecution of a sitting president, the House of Representatives is the only institution of government capable of holding Trump accountable for actions outlined in the Mueller report.

‘The House must have access to all the relevant facts and consider whether to exercise its full … powers, including a constitutional power of the utmost gravity: recommendation of articles of impeachment,’ Nadler said, reading from the court petition. 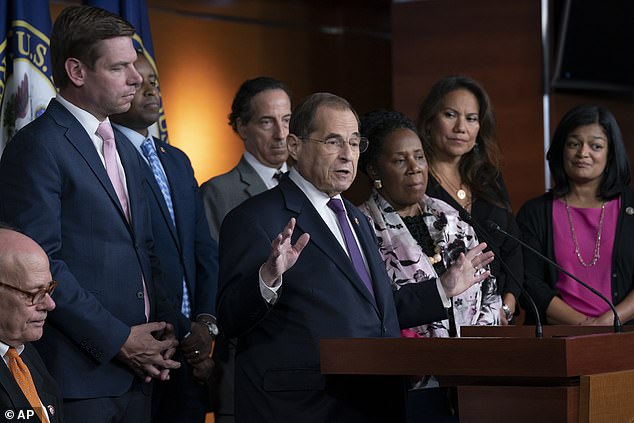 The House Judiciary Committee asked a federal court on Friday for access to grand jury evidence from the Mueller probe that lawmakers say they need to determine whether to begin impeachment proceedings against Trump. Committee Chairman Jerry Nadler is seen center

Committee aides pushed back on assertions that Congress needs a formal impeachment inquiry to justify accessing grand jury evidence, saying lawmakers have been considering articles of impeachment since February, when the House referred an impeachment resolution to the committee.

To bolster the argument, Democratic lawmakers at Nadler’s news conference described their ongoing obstruction of justice probe against Trump as an ‘impeachment investigation.’

‘Judiciary Democrats are suing for grand jury material to which they have no right,’ he said in a statement.

‘Chairman Nadler’s legal action here is sure to fail, weakening Congress’s ability to conduct oversight now and into the future.’

Nadler described legal action, including the pending McGahn lawsuit, as a potential watershed that could dismantle recent White House stonewalling tactics that direct current and former Trump aides to defy subpoenas and refrain from testifying.

But with the 2020 election campaign season fast approaching, she also made it clear that the impeachment issue would not be allowed to linger.

‘The decision will be made in a timely fashion. This isn’t endless,’ Pelosi, while denying suggestions that she was trying to ‘run out the clock’ on impeachment.

Mueller found insufficient evidence to allege that the Trump campaign conspired with Moscow in its effort to help Trump get elected in 2016, although campaign officials met with Russians.

He also reached no conclusions on whether Trump tried to obstruct Mueller’s inquiry.

But Democrats say testimony from McGahn could give them the evidence they need for an impeachment inquiry.

A star witness in the 448-page Mueller report released in April, McGahn told Mueller that Trump directed him to seek the special counsel’s removal and then to deny that he had been instructed to do so.