President Donald Trump has remarked on the shooting massacre of congregants at a Jewish synagogue in Pittsburgh.

On Saturday afternoon, Trump again addressed the shooting in scripted remarks at an event in Indianapolis.

‘Our minds cannot comprehend the cruel hate and the twisted malice that could cause a person to unleash such terrible violence during a baby naming ceremony,’ Trump said.

‘The vile hatred and poison of antisemitism must be condemned anywhere and everywhere it appears,’ he said.

Trump speaks at the Future Farmers of America convention on Friday in Indianapolis, Indiana 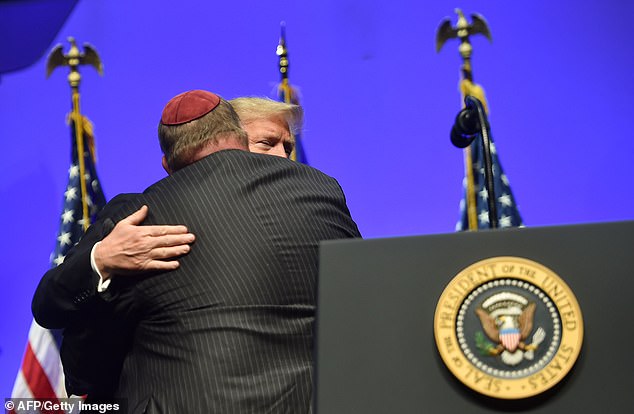 In earlier remarks to reporters at Joint Base Andrews as he boarded Air Force One, Trump said: ‘If there was an armed guard inside the temple they would have been able to stop him.’

‘Maybe there would have been nobody killed except for him, frankly,’ Trump continued.

‘Isn’t it a shame that you have to think of that inside of a temple or inside of a church? But certainly the result would have been far better,’ he said.

The shooting occurred at the Tree of Life Congregation Synagogue in the Squirrel Hill area of Pittsburgh shortly before 10am on Friday. The suspect, who has been identified as 46-year-old Robert Bowers, is in custody.

Asked if he thought all churches and synagogues should have armed guards, Trump responded: ‘I hate to think of it that way, I will say that.’

‘It has been a world with a lot of problems for many years and you could say frankly for many centuries,’ he said. 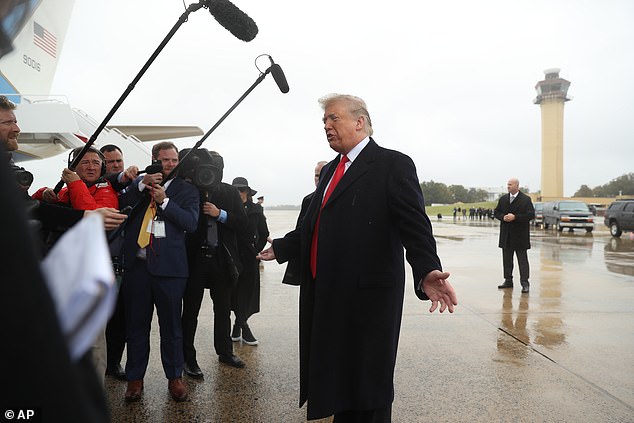 ‘If there was an armed guard inside the temple they would have been able to stop him,’ Trump said in remarks to reporters at Joint Base Andrews 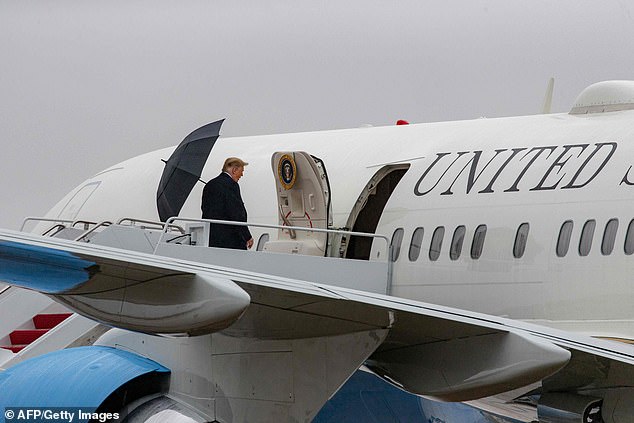 Trump boards Air Force One at Joint Base Andrews on Saturday in Maryland after addressing the media on the mass shooting at a synagogue in Pittsburgh, Pennsylvania 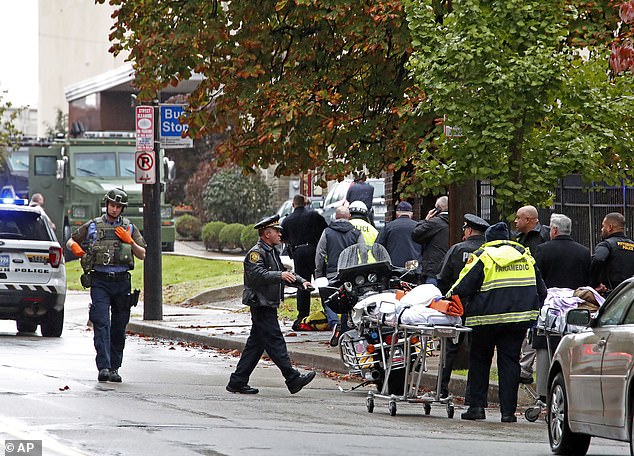 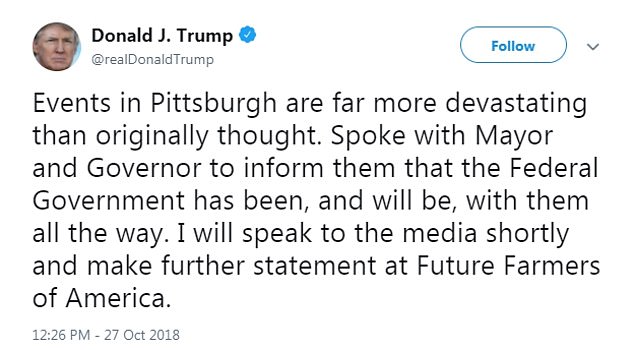 ‘When people do this, they should get the death penalty, and they shouldn’t have to wait years. Now the lawyers will get involved,’ Trump said.

‘It’s a terrible thing going on with hate in our country, and all over the world,’ Trump said.

Several prominent Jewish celebrities quickly reacted with scorn to Trump’s call for armed guards in houses of worship, rather than gun control laws.

‘No one should have to go through airport security to go to pray in a synagogue or church or a mosque. This is not the fault of the synagogue….,’ Ben Stiller wrote on Twitter.

The anti-Semitic shooting capped a week of political violence in which 14 pipe bombs were mailed to various elite Democrats. The suspect in the bombings, Cesar Sayoc, was arrested on Friday.

The Pittsburgh shooting unfolded around 9.30am, when the gunman burst through the synagogue’s doors and opened fire on the congregation on the main floor where around 40 to 50 people had gathered for a Sabbath service. Witnesses said he shouted ‘all Jews must die!’ while firing on the congregation. 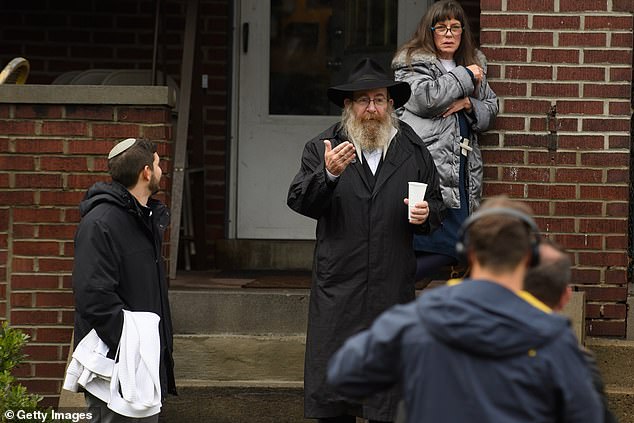 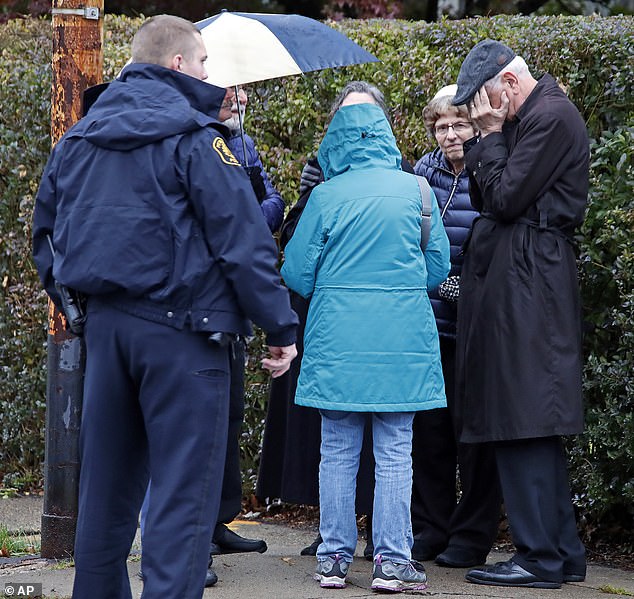 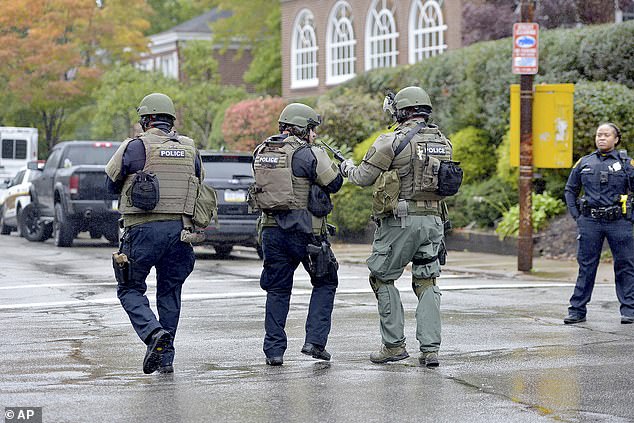 Polikce respond to an active shooter situation at the Tree of Life synagogue on Wildins Avenue in the Squirrel Hill neighborhood of Pittsburgh, Pennsylvania on Saturday

A mother who identified herself as Jennifer said that her daughter had been trapped inside the synagogue when the shooting began.

‘They heard the shots and they all, her friend’s mom and dad and son, they just all ran downstairs I guess and barricaded themselves in the basement,’ she told television reporters.

‘They kept hearing gunfire and everything else,’ she said. Jennifer said her daughter had survived and was safe with police at the time of the interview.

After killing three people on the main floor, the gunman went downstairs, where a second congregation was gathering in the basement, and opened fire there.

He murdered four people there then fled upstairs where, on the third floor, he exchanged fire with SWAT teams and injured three police officers. A third, smaller group was gathered in the rabbi’s office to the side of the main congregation.

One man struggled to compose himself as he described racing to the synagogue to check on family members who were inside during the shooting.

‘My father-in-law was inside, I got married in this place, this is crazy,’ the witness told reporters at the scene. ‘This is unbelievable. People have to stop the hate. They have to stop.’

He said his father-in-law escaped the synagogue safely.

Just did a very emotional interview with a man who said his friends were inside the Tree of Life of Synagogue. His father in-law got outside safely pic.twitter.com/WQHVtpM3WQ 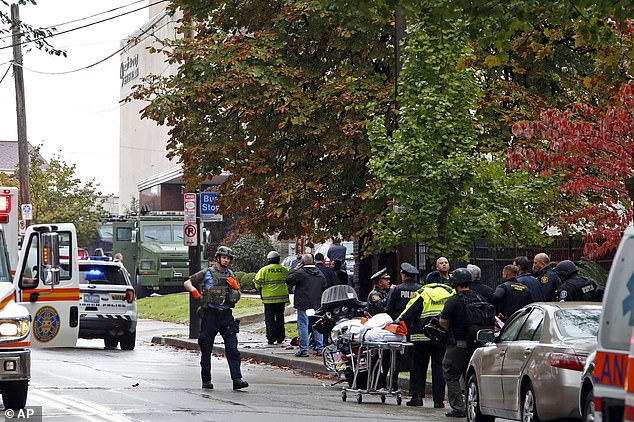 After being injured himself in the crossfire, the gunman surrendered to police.

Saturday is one of the busiest days for the synagogue. As many as 100 people in total had gathered across the three congregations for a Sabbath service and a Bris ceremony.

There was no security there, with former synagogue leaders describing how it operates an open door policy for worshipers.

‘On a day today the door is open you can walk in an out,’ the synagogue’s former CEO told CBS Pittsburgh. 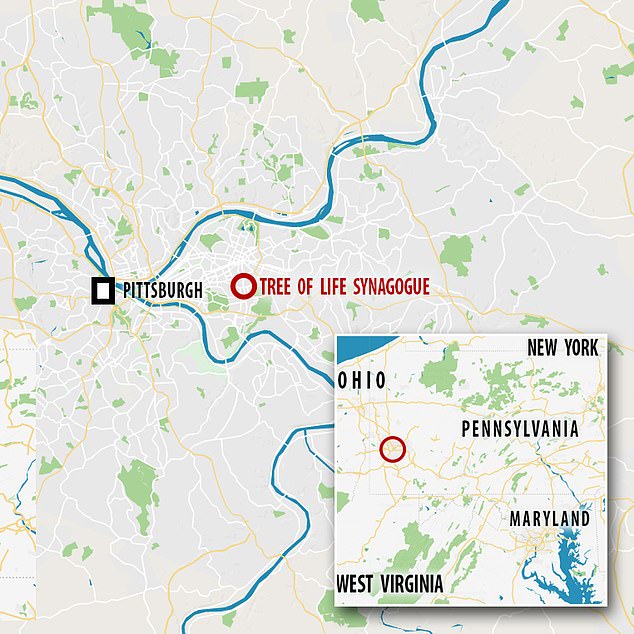 ‘Like most religious institutions, we have an open door,’ he said.

He added that security had been a ‘major’ concern for him in the past and that he was working with the DHS to improve escape routes and emergency procedures.

‘It was a major concern for me , for us. We were working with the DHS to evaluate exit routes, I just spoke to our maintenance person who was able to get out.

‘We were working with the other synagogues on what to do if this happened,’ he said.

He said of the building’s maintenance man: ‘He was shaken, he saw one of our congregants down, he knew, he was in the bathroom and he was able to get out of the building.’

There are three different congregations in the building and all were likely full, according to the synagogue’s former president.