Former President Donald Trump said Vladimir Putin is ‘not worried’ about any threats or warnings from President Joe Biden after the two world leaders spoke for roughly two hours on Tuesday about the increasingly tense situation in Ukraine.

Biden and the Russian president met via video chat to discuss his country amassing troops at its border with Ukraine. Kyiv officials have pled with the United States military to send more weapons, fearing an imminent invasion.

The president told Putin that any attack on the former Soviet satellite state’s sovereignty would be met with real costs – including harsh sanctions.

Trump, who shared a considerably warmer relationship with Putin than Biden does, mocked his Democratic rival’s assertive stance and pointed to the widely-criticized US military withdrawal from Afghanistan in August.

‘Vladimir Putin looks at our pathetic surrender in Afghanistan, leaving behind dead Soldiers, American citizens, and $85 billion worth of Military equipment. He then looks at Biden. He is not worried!’ Trump declared in a statement via his Save America PAC.

Putin had praised Trump in an interview with NBC earlier this year, ‘Well even now, I believe that former US President Mr. Trump is an extraordinary individual, talented individual, otherwise he would not have become US president.’

And in October, the Russian leader commended Biden for pulling out of Afghanistan despite bipartisan criticism from leaders and legislators at home.

But on Tuesday morning, the president was seen waving to Putin and chuckling during what was supposed to be a tense video call. 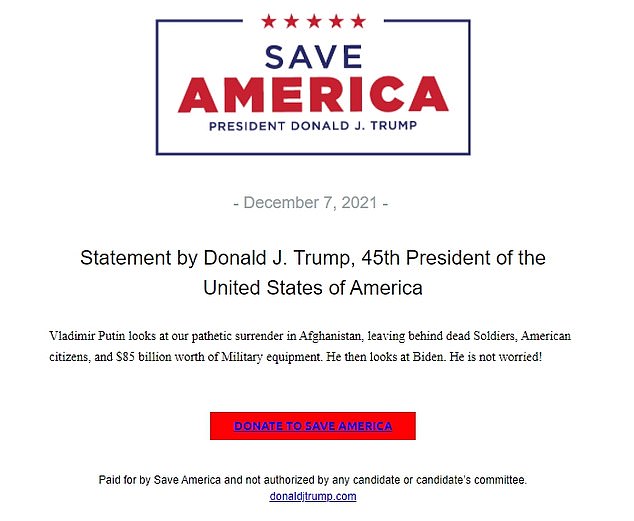 In a statement released on Tuesday afternoon, Trump said Putin is ‘not worried’ about Biden 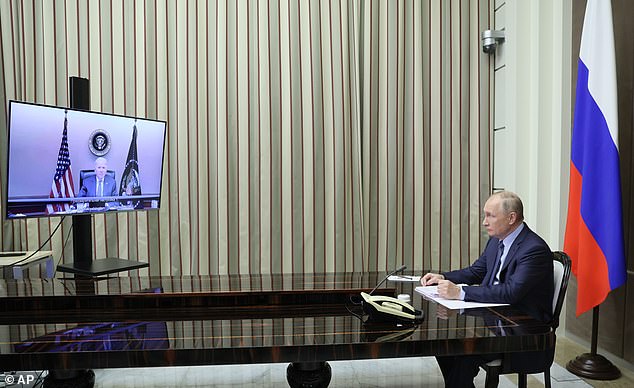 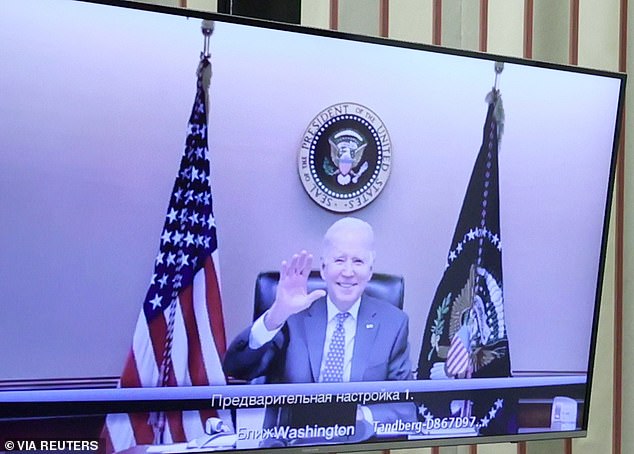 But the White House said Biden gave tough talk to his Russian counterpart in their two-hour conversation and made it clear any invasion of Ukraine would be met with ‘strong’ economic sanctions and ‘other measures.’

During the video chat, Biden ‘voiced the deep concerns of the United States and our European Allies about Russia’s escalation of forces surrounding Ukraine and made clear that the US and our Allies would respond with strong economic and other measures in the event of military escalation,’ the White House said in a readout of the call.

‘President Biden reiterated his support for Ukraine’s sovereignty and territorial integrity and called for de-escalation and a return to diplomacy,’ the White House noted. There will be follow up conversations on the staff level.

Russian news agencies released video of the first few minutes of the call.

In it, Biden is seen experiencing some technical difficulties, apparently forgetting to switch his microphone on.

There was silence on the other end and then Biden was seen leaning forward and flipping a button. 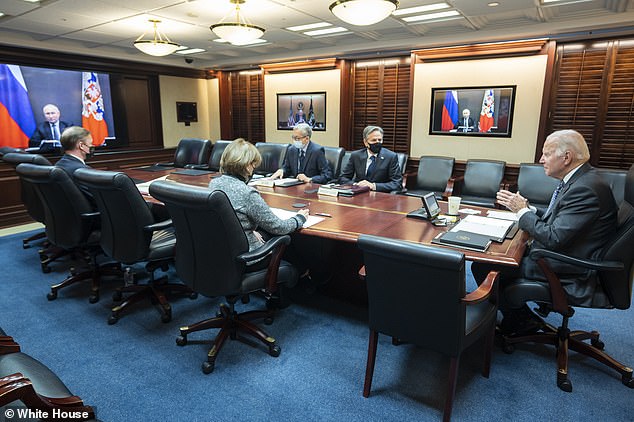 After the call with Putin ended, the White House released its own photo of the virtual conversation

‘Hello,’ he added, chuckling and waving to his Russian counterpart. ‘It’s good to see you again.’

Biden was also heard telling Putin during another short clip from there chat: ‘We didn’t get to see one another at the G20. I hope the next time we meet we do it in person.’

The call started at 10:07 am ET, according to the White House. American press were not allowed to view the conversation. It ended at 12:08 pm the White House said.

President Joseph R. Biden, Jr. held a secure video call today with President Vladimir Putin of Russia to discuss a range of issues on the U.S.-Russia agenda. President Biden voiced the deep concerns of the United States and our European Allies about Russia’s escalation of forces surrounding Ukraine and made clear that the U.S. and our Allies would respond with strong economic and other measures in the event of military escalation. President Biden reiterated his support for Ukraine’s sovereignty and territorial integrity and called for de-escalation and a return to diplomacy. The two presidents tasked their teams to follow up, and the U.S. will do so in close coordination with allies and partners. The presidents also discussed the U.S.-Russia dialogue on Strategic Stability, a separate dialogue on ransomware, as well as joint work on regional issues such as Iran.

‘.@POTUS held a secure video call with President Putin of Russia today to discuss a range of topics in the US-Russia relationship, including our concerns about Russian military activities on the border with Ukraine, cyber, and regional issues,’ the White House said in the tweet.

In the White House photo, Biden is seen maskless at the head of a table, with a masked Secretary of State Anthony Blinken and National Security Adviser Jake Sullivan on the sidelines.

Putin was on the call from his residence in the Black Sea resort of Sochi. It’s the fourth direct conversation between the two leaders this year, following two calls and one summit in Geneva.

After the conversation with Putin, Biden will speak with President Emmanuel Macron of France, Chancellor Angela Merkel of Germany, Prime Mario Minister Draghi of Italy, and Prime Minister Boris Johnson of the United Kingdom, according to the White House.

Also after the call, Sullivan appeared in the White House briefing room and was asked directly if sending more US troops was on the table.

Sullivan answered that if there was a ‘military escalation’ into Ukraine by Russia, the U.S. expected that Baltic allies including Romania, Poland and others, to be increasingly concerned about their own security.

‘They will be seeking, we expect, additional capabilities and potentially additional deployments and the United States will be looking to respond positively to those things in the event that there is a further incursion into Ukraine,’ Sullivan answered.

Sullivan also made clear that the U.S. planned to respond more forcefully than the Obama administration did in 2014, when Russia invaded and annexed the Crimean Peninsula from Ukraine.

‘I will look you into the eye and tell you, as President Biden looked President Putin in the eye and told him today that things we did not do in 2014 we are prepared to do now,’ Sullivan told reporters.

‘In terms of specifics, we would prefer to communicate that directly to the Russians, to not negotiate in public, to not telegraph our punches,’ Sullivan continued. ‘But we are laying out for the Russian, in some detail, the types of measures that we have in mind.’

Meanwhile, Ukraine has warned of a ‘bloody massacre’ and five million Ukrainian refugees fleeing into Europe if Russia decides to invade Kiev.

Satellite images show increasing numbers of Russian troops massing on the border of Ukraine – as many as 175,000 according to US analysts.

Ukrainian Defense Minister Oleksiy Reznikov told CNN there would be a ‘really bloody massacre’ if Russia invaded Ukraine and warned that ‘Russian guys also will come back in coffins’.