Donald Trump said Wednesday that social media and online search companies like Twitter and Google are ‘trying to rig the election’ in 2020 by skewing their platforms against conservatives.

The president suggested that tech giants should be subjected to lawsuits and targeted by new legislation, even as the White House plans to host a summit next month to court their executives.

His take-no-prisoners comments came after a right-wing group caught a Google executive on camera acknowledging political biases and vowing to ‘stop the next Trump situation.’

Google’s Jen Gennai was filmed at a restaurant explaining that the company was trying to understand ‘what happened there, and how do we prevent it from happening again.’

Trump blasted Google and Twitter in a Fox Business Network interview on Wednesday: ‘These people are all Democrats. It’s totally biased towards Democrats.’

‘Let me tell you, they’re trying to rig the election,’ he said. ‘That’s what we should be looking at, not the witch hunt, the phony witch hunt which has proven zero.’

Trump has long used that label to refer to an extended Russia-related probe that confirmed his campaign didn’t collude with the Kremlin to win in 2016.

The president said he didn’t know if Google was breaking any laws by putting its thumb on the political scales.

‘But I tell you what, they should be sued,’ he said, referring to ‘that executive yesterday from Google, the hatred for the Republicans.’

‘It’s not even like, “Gee, let’s lean Democrat,” he said. ‘The hatred! And actually, you know, I heard that all during my election. It’s hard that I won. They were swamping us with negative stuff.’ 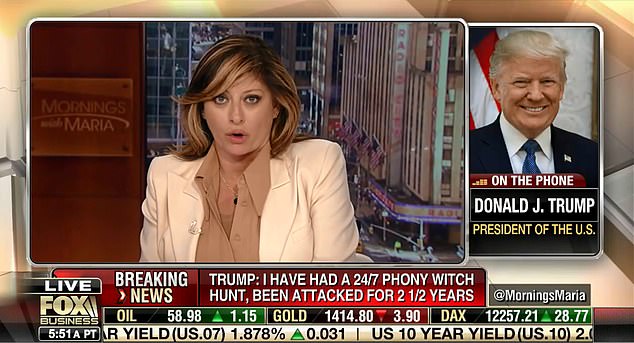 The president claimed in a Fox Business Network interview that Twitter is stopping people from following his popular account, and that Big Tech is ‘biased toward Democrats’

The White House will host a group of ‘digital leaders’ on July 11 for a meeting, Trump spokesman Judd Deere said Wednesday morning.

The president, however, is running out of patience.

‘Look, we should be suing Google and Facebook and all that – which perhaps we will,’ he said on Fox Business.

Trump said this month that regulators should consider fining tech companies for their status as monopolies.

‘If I announced tomorrow I am going to become a nice liberal Democrat, I would pick up five times more followers,’ he claimed. 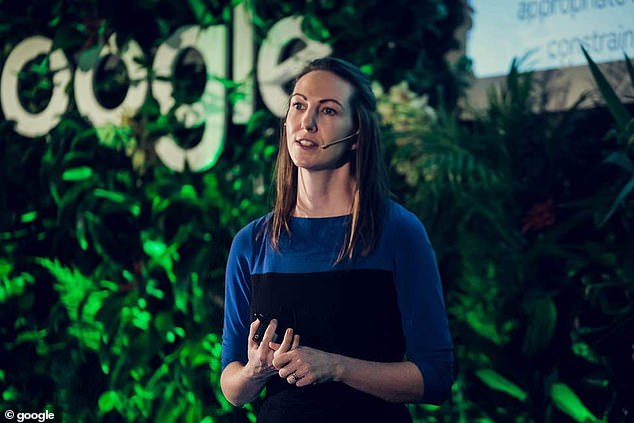 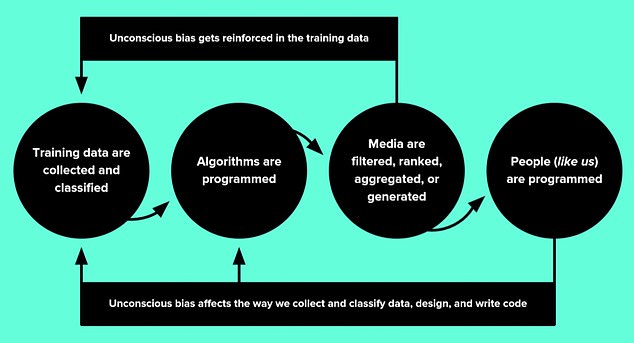 Google has categorically denied that politics play any role in the complex algorithms that determine what users are shown when they search a term, though an undated chart published by Project Veritas and reportedly from internal Google documents seems to suggest otherwise 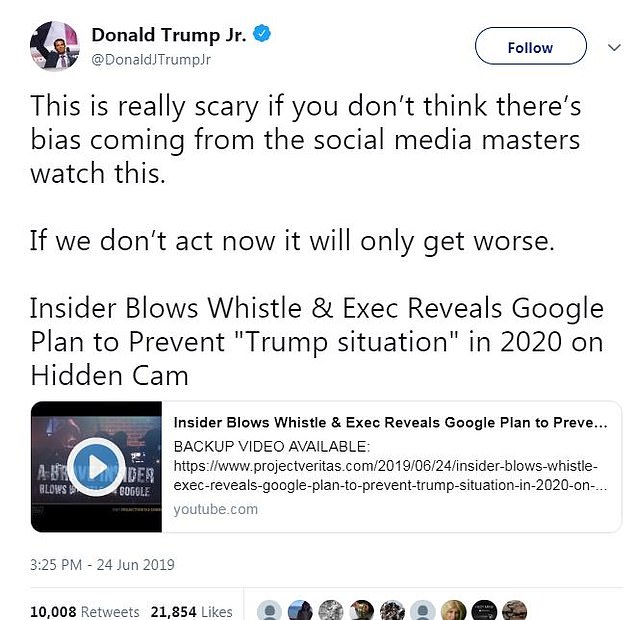 On Monday, Donald Trump Jr. tweeted the video posted by Project Veritas and wrote: ‘This is really scary if you don’t think there’s bias coming from the social media masters watch this. If we don’t act now it will only get worse’

A company insider provided the conservative group with documents outlining Google’s explanation of ‘algorithmic unfairness,’ which appeared to expose a liberal bent at the online giant.

A document leaked by the alleged insider contained language about addressing ‘unjust or prejudicial treatment,’ saying that even when search results are factually accurate, ‘it may be desirable to consider how we might help society reach a more fair and equitable state, via either product intervention or broader corporate social responsibility efforts.’