Trump says the Second Amendment will never be repealed

President Donald Trump is taking on a retired Supreme Court justice who dramatically called for the repeal of the Second Amendment.

Trump said Wednesday that the constitutional right to bear arms would ‘NEVER’ be taken away in a tweet squarely aimed at John Paul Stevens, a former associate justice.

Writing in all caps, Trump said, ‘THE SECOND AMENDMENT WILL NEVER BE REPEALED! As much as Democrats would like to see this happen, and despite the words yesterday of former Supreme Court Justice Stevens, NO WAY.

‘We need more Republicans in 2018 and must ALWAYS hold the Supreme Court!’ the president said, turning the anti-gun push into a mid-term election rallying cry. Former justice John Paul Stevens touched off on the anti-gun violence marches led by students across the country and said that true reforms would only come from a constitutional amendment ending Americans’ right to bear arms. President Trump hit back at him on Wednesday ‘We need more Republicans in 2018 and must ALWAYS hold the Supreme Court!’ the president said, turning the anti-gun push into a mid-term election rallying cry 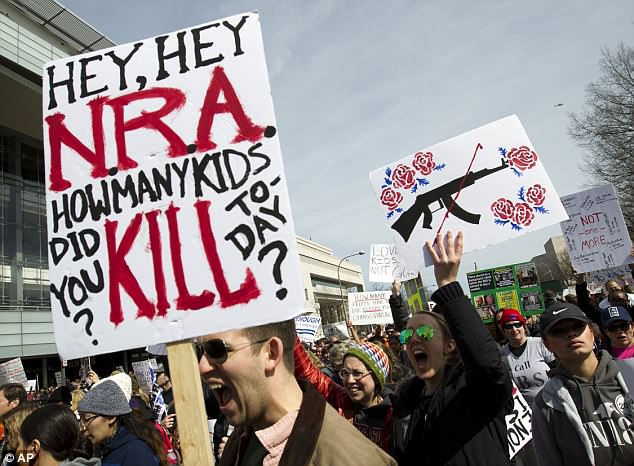 Protesters hold signs and shout during the ‘March for Our Lives’ rally in support of gun control in Washington. Stevens’ op-ed was in direct response to the marches

Trump and the head of the National Rifle Association claimed last month at a national gathering of conservative activists that the left would come after Americans’ gun rights if they seize power.

‘Our American freedoms could be lost and our country will be changed forever,’ NRA chief Wayne LaPierre said. ‘The first to go will be the Second Amendment.’

A day later at the same conference, President Trump echoed LaPierre’s mid-term warning, telling guests that if Democrats ‘get in’ to office, ‘They will take away your Second Amendment, which we will never allow to happen.’

In an op-ed for the New York Times on Monday, Stevens urged legislators to do just that.

Touching off on the anti-gun violence marches led by students across the country over the weekend, Stevens said that true reforms would only come from a constitutional amendment ending Americans’ right to bear arms.

‘That simple but dramatic action would move Saturday’s marchers closer to their objective than any other possible reform,’ Stevens, a Republican-appointed justice, wrote.

On the court, Stevens often sided with the liberal wing, even though he was appointed by Republican President Gerald Ford. He has declined to state his political affiliation in recent years.

The 97-year-old retired in 2010 after 35 years of service, making him the third-longest serving justice.

A well regulated Militia, being necessary to the security of a free State, the right of the people to keep and bear Arms, shall not be infringed.

What the Second Amendment says

Stevens said in the Times that he’d been inspired by the student-led marches that represent a broadening level of support for gun reforms.

The marches are a clear sign that legislators should raise the minimum age for certain types of firearms from 18 to 21, he said, and introduce stricter background checks for purchasing firearms.

‘But the demonstrators should seek more effective and more lasting reform. They should demand a repeal of the Second Amendment,’ he said.

The concerns that led to the creation of the constitutional amendment, the need fight back against a government assault, ‘is a relic of the 18th century,’ Stevens wrote.

He pinpointed loose gun regulations on powerful lobbying by the National Rifle Association, calling the gun group a ‘propaganda machine.’

‘Overturning that decision via a constitutional amendment to get rid of the Second Amendment would be simple and would do more to weaken the N.R.A.’s ability to stymie legislative debate and block constructive gun control legislation than any other available option,’ he said. The 97-year-old retired in 2010 after 35 years of service, making him the third-longest serving justice. He’s seen here with his fellow justices in 2009 in the front row, second from left

Repealing the Second Amendment, he wrote, would get rid of the only legal standing that firearms sellers have in America.

‘It would make our schoolchildren safer than they have been since 2008 and honor the memories of the many, indeed far too many, victims of recent gun violence,’ he stated.

A fierce debate over gun control is underway in America following a school shooting in Parkland, Florida, last month. Students from the high school started a nationwide movement that has taken hold and led to marches on Washington and other major cities over the weekend.

The federal government last week passed two minor measures that had bipartisan support and the backing of President Trump. Students and activists are asking legislators to do more before the conversation moves on, including the creation of a rule requiring background checks on private gun sales.

President Donald Trump has said that schools should allow teachers to carry firearms as a deterrence to violence in schools. The White House is also pressing state governments to authorize temporary restraining orders for mentally ill persons to block their access to firearms.

As a justice, Stevens led the dissent in the most significant Second Amendment case he was party to, 2008’s District of Columbia v Heller, which ended with a 5-4 ruling that the right to bear arms was not connected to service in a militia.

It opened the way for 2010’s decision that state regulation of them has to be in line with the 14th Amendment’s Due Process clause.

Together both of them were seen as victories by the gun lobby, and Stevens’ op-ed suggests that he sees no other way to regulate guns effectively than by abolishing the Second Amendment in its entirety.

Only one amendment to the Constitution has been repealed since 1787 – prohibition.

The 18th Amendment banned the sale of alcohol in the United States in 1919 but it was ineffective, unpopular and had led to the rise of violent crime and widescale corruption, horrifying many of those who had advocated it in the first place.

By the late 1920s it was clear that it was likely to be challenged.

Technically there is no process of ‘repeal’ in the constitution, but it can be ‘amended’, which is what happened in 1933 to the 18th Amendment.

The 21st Amendment says simply: ‘The eighteenth article of amendment to the Constitution of the United States is hereby repealed.’ 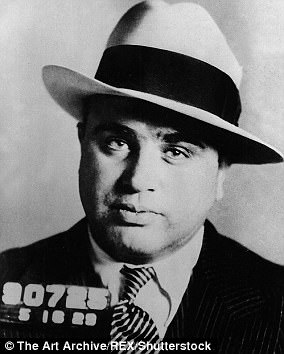 Reason for repeal: Al Capone’s world of organized crime so horrified even those who had pushed for prohibition that the 18th Amendment was removed by the 21st Amendment

Repeal of the 18th Amendment offers something of a clue as to what would happen if there was a move to repeal the Second Amendment.

First there would have to be a proposed 28th Amendment which would repeal the second.

Then the process of making it law begins.

The starting point in 1933 was that both houses proposed an amendment to the Constitution – with a two-thirds majority needed in both the House and the Senate.

That started part two of the process: amendment by the states.

The Constitution requires that three-quarters of the states approve an amendment – which would currently mean 38.

To approve, Congress has to define whether the states vote in their own legislatures or there is another option – that each of them call their own Convention to vote on it.

That was what happened in 1933 because state politicians still feared that the temperance lobby would turn on them in return for voting down prohibition.

So instead they got to send delegates to a Convention, who voted for them – and who were not going to suffer consequences from the feared temperance lobby.

South Carolina was the only state to vote against but once 37 states had voted in favor – there were then 48 in total – the others did not have to vote anyway, and prohibition was over.

An identical system of conventions could happen again if Republicans privately backed repeal but did not want to risk the wrath of the National Rifle Association and pro-gun voters.

There is, however, another path to repeal; two-thirds of the states could pass resolutions calling for a Convention.

That would force Congress to call an Article V Convention, something which has never happened before, named after the article of the Constitution which regulates how it is amended.

Lawyers are divided on whether an Article V Convention could be limited to proposing just one thing, or whether it would be able to make multiple suggestions – each one of which the states would then vote on.

But one aspect of Article V which may bolster Stevens’ case and worry gun-rights advocates is that nowhere does it link repeal to the popular will – meaning that as long as a pro-repeal lobby can get enough elected representatives to vote in favor in Congress and then in three-quarters of the states, it would be possible to move to repeal – which may well prove a lower bar than getting actual voters to back repeal.

In 1933 the temperance movement proved to be a paper tiger – those who back Stevens would have to gamble that the same would happen for the gun lobby.