Trump: Schumer and Pelosi MUST fund his wall because most employees hit by shutdown are Democrats

Donald Trump said Thursday afternoon, as the Senate was poised to reconvene, that Democrats were ‘obstructing’ the upper chamber and forcing not only a government shutdown but a historically-long waiting list for his federal nominees.

Trump seemed to be setting the stage for new pressure on Senate Majority Leader Mitch McConnell to throw out the rules and go ‘nuclear’ so that he can force through his agenda with a simple majority.

A tweet that came after nearly seven hours of silence while he recovered from a secret trip to Iraq said, ‘The Democrats OBSTRUCTION of the desperately needed Wall, where they almost all recently agreed it should be built, is exceeded only by their OBSTRUCTION of 350 great people wanting & expecting to come into Government after being delayed for more than two years, a U.S. record!

‘The reason the DACA for Wall deal didn’t get done was that a ridiculous court decision from the 9th Circuit allowed DACA to remain, thereby setting up a Supteme Court case. After ruling, Dems dropped deal – and that’s where we are today, Democrat obstruction of the needed Wall.’

fired a new shot across Democrats’ bow on Thursday, claiming that they should feel motivated to end a six-day-old partial government shutdown because most of the out-of-work federal employees are part of their political base.

‘Do the Dems realize that most of the people not getting paid are Democrats?’ the president tweeted.

Trump had just made a morning return to the White House after visiting Al Asad Air Base in Al Anbar Province, Iraq. He was busy tweeting an hour and 16 minutes later.

It’s unclear what percentage of furloughed federal workers are registered Democrats. But a late 2016 analysis of political donations among self-identified federal government employees, conducted by The Hill, showed that about 95 per cent of their presidential campaign contributions went to Hillary Clinton.

President Donald Trump, pictured at Ramstein Air Base in Germany on his way back from Iraq, tweeted upon his return to Washington that his congressional adversaries should give him billions of dollars to fund his U.S.-mexico border wall because the federal employees affected by a partial government shutdown resulting from the funding statement are mostly Democrats 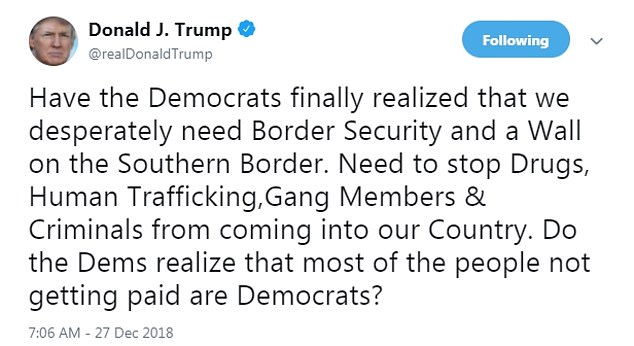 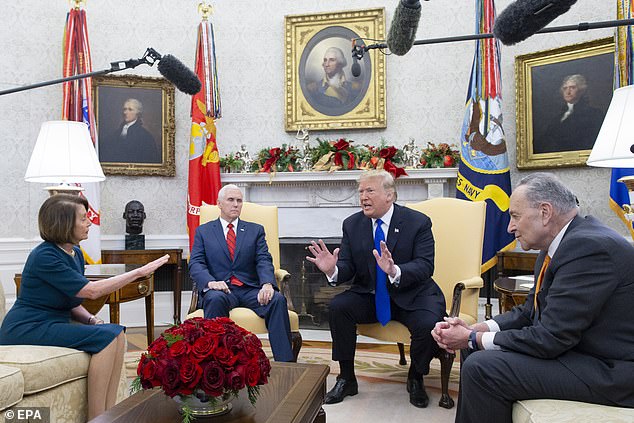 Friday night’s partial shutdown, the third since Trump took office in January 2017, came after the White House and congressional Democrats reached a stalemate over funding for a wall on the U.S.-Mexico border.

‘Have the Democrats finally realized that we desperately need Border Security and a Wall on the Southern Border. Need to stop Drugs, Human Trafficking,Gang Members & Criminals from coming into our Country,’ Trump tweeted.

He first praised America’s troops in the Middle East, saying the Iraq-based servicemen and women he visited are ‘incredible people’ who ‘know how to win!’ 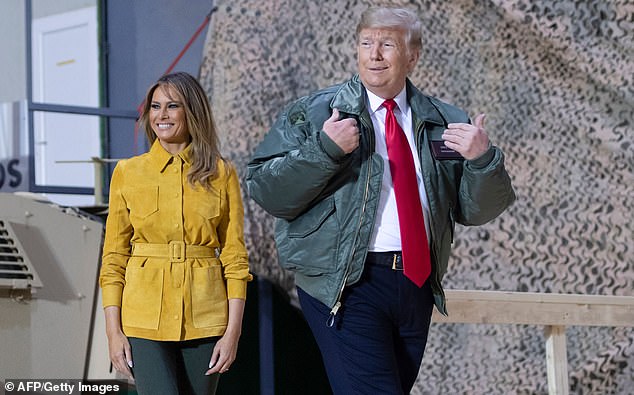 Trump vowed on his way to Iraq aboard Air Force One that he would stick to his guns in order to resolve the shutdown in Republicans’ favor, telling reporters that he’ll do just about anything to secure funding for his wall.

He declined to say how much he would accept in a deal with congressional Democrats.

When asked how long he would wait to get what he wants, he said, ‘Whatever it takes. We need a wall. We need safety for our country.’ 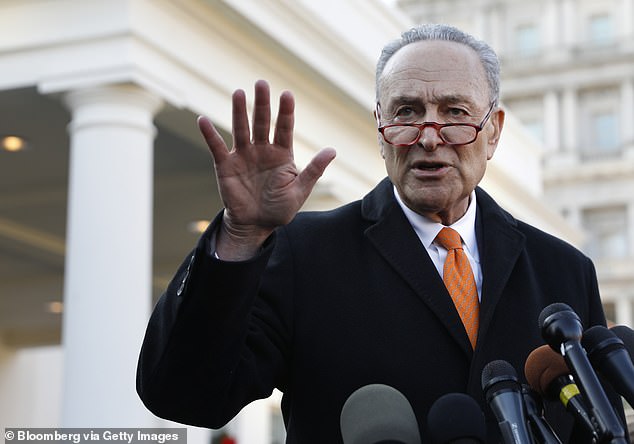 Schumer appears to be the main stumbling block since the House has passed a bill devoting $5.8 billion to Trump’s border wall