President Donald Trump proclaimed himself an ‘environmentalist’ Monday after missing a climate change discussion on Monday with other world leaders at the G7 summit in Biarritz, France.

At a press conference, the president said he knows ‘more about the environment than most people’ in part due to his time as a builder, when environmental concerns often pose last-minute roadblocks to a project.

At a summit where relentless fires in the Amazon provided a backdrop, Trump did not respond directly when asked if he still harbored doubts about global warming, vouching for his environmental credentials by pointing to numerous environmental impact statements he has been involved with.

‘I went the cleanest water on earth. I want to cleanest air on earth. And that’s what we’re doing. I’m an environmentalist,’ Trump told reporters at the end of the summit.

‘A lot of people don’t understand that I have done more environmental impact statements probably than anybody, that’s I guess I can say definitely because I’ve done many, many, many of them. More than anybody that’s ever been president or vice president or anything even close to president. And I think I know more about the environment than most people,’ he said. Trump was referencing his time as a builder, when an environmental review is part of the construction process.

Although he steered clear of the global warming debate, after long expressing doubts, Trump touted the value of U.S. oil and liquified national gas reserves, and called for new infrastructure to harness it.

‘I think I know more about the environment than most people,’ said President Trump, calling himself an environmentalist after skipping a meeting on climate change at the G7 summit

He said the domestic industry is creating ‘tremendous wealth, and LNG is being sought over all over Europe and all over the world.’

‘I want clean air. I want clean water I want a wealthy country. I want a spectacular country with jobs, with pensions, with so many things and that’s what we’re getting so I want to be very careful at the same time at the same time … it’s very important to me, very important to me, we have to maintain this incredible – this incredible place that we’ve all built. We’ve become much richer country and that’s a good thing, not a bad thing because that great wealth allows us to take care of people,’ Trump said.

He concluded his remarks with some environmental boosterism.

‘We can take care of people that we couldn’t afford taking care of the past because of the great wealth we can’t let that wealth is taken away clean air clean water – thank you very much everybody I appreciate it, thank you,’ he concluded.

Trump was scheduled to attend the session on climate, biodiversity and oceans, but his chair remained empty while other leaders pledged a modest $20 million to help put out fires that are raging across wide swaths of the Amazon jungles in Brazil.

‘He wasn’t in the room but his team was there,’ French President Emmanuel Macron said.

The White House attributed his absence to scheduled one-on-one meetings that he attended with India’s Prime Minister Narendra Modi and German Chancellor Angela Merkel – both of whom managed to attend. 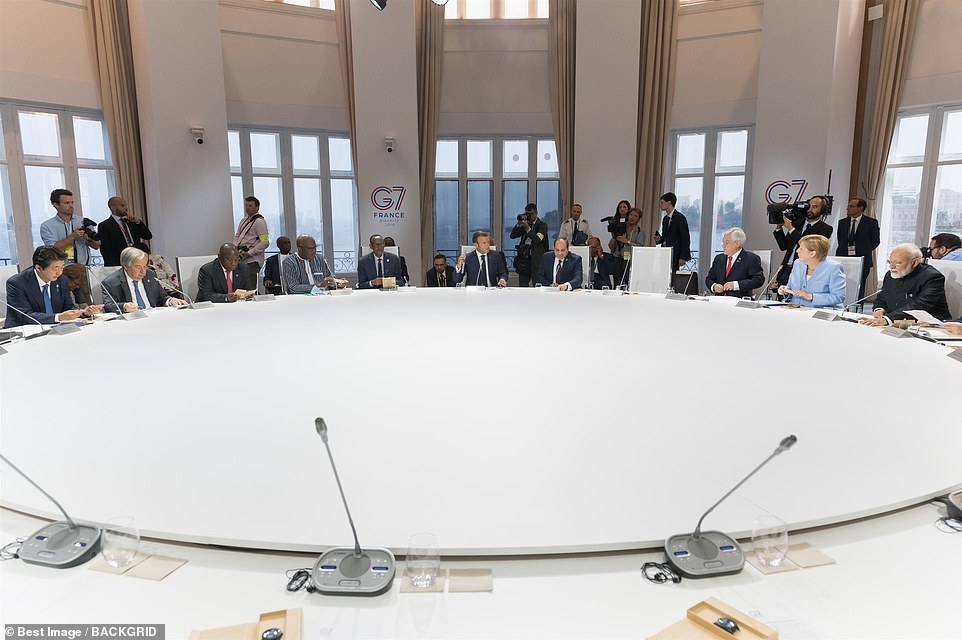 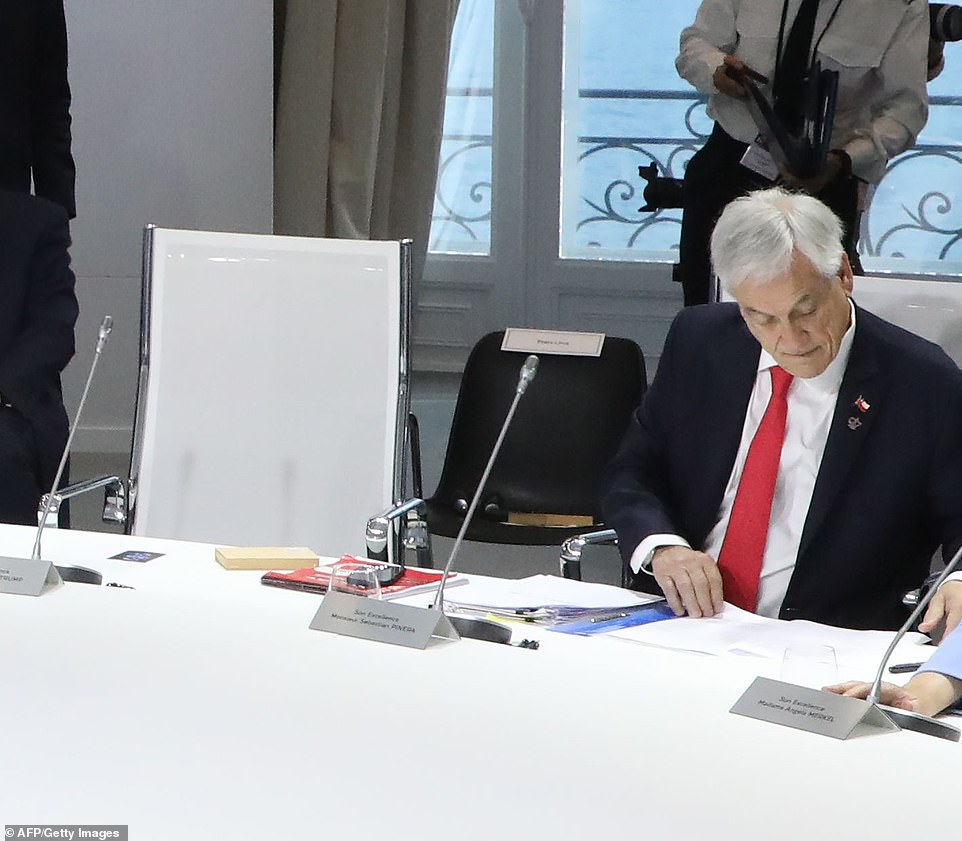 President Donald Trump’s chair remained empty Monday during a multinational work session focused on climate change in Biarritz, France, on the sidelines of the annual G7 Summit attended by the leaders of the world’s seven richest democracies 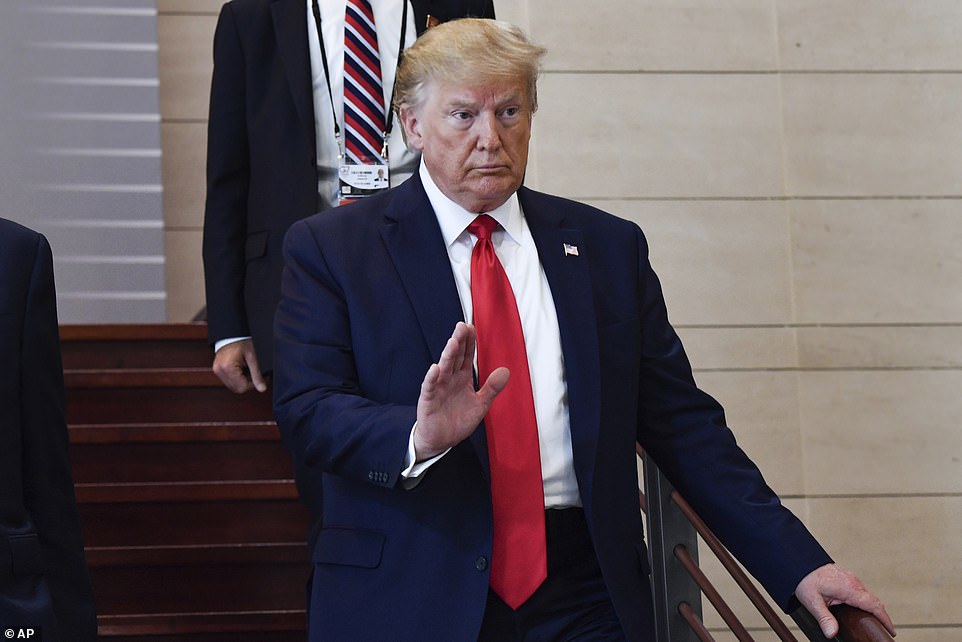 When reporters asked him about the meeting, which was already underway, Trump seemed to think it hadn’t happened yet 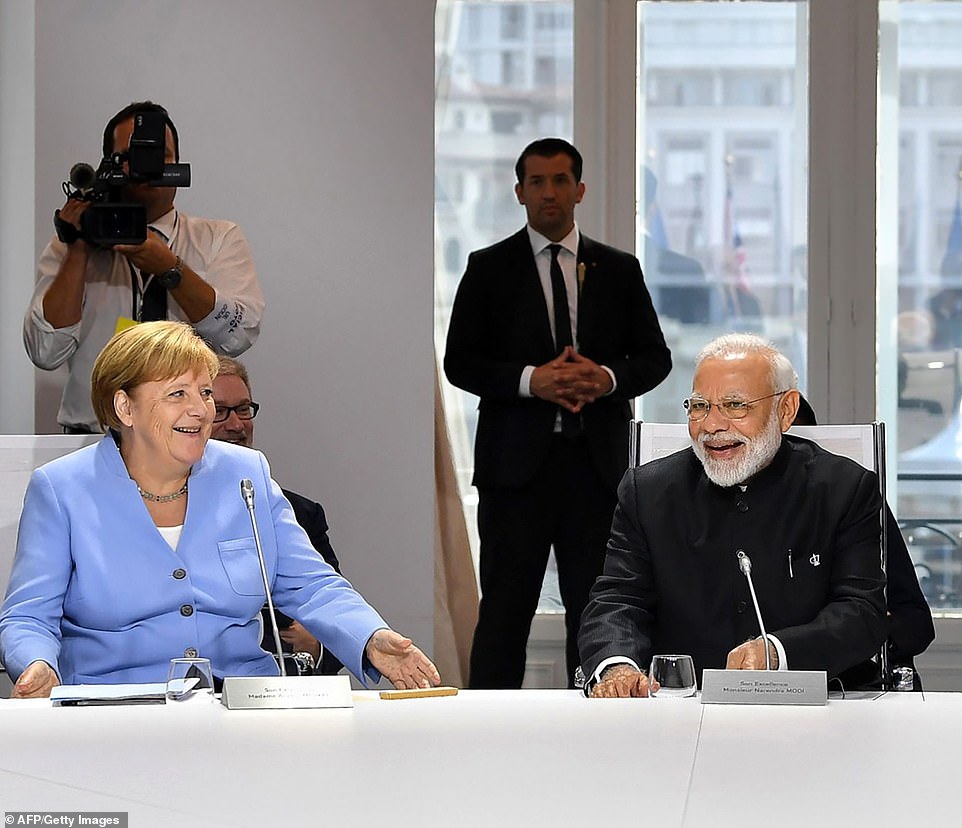 The White House said Trump skipped the global warming session on Monday because of ‘scheduled meetings and bilaterals with Germany and India’; both of those nations’ leaders, Chancellor Angela Merkel (left) and Prime Minister Narendra Modi (right) managed to attend

‘The President had scheduled meetings and bilaterals with Germany and India, so a senior member of the Administration attended in his stead,’ White House Press Secretary Stephanie Grisham told DailyMail.com and other news outlets.

A White House official said the stand-in was an aide from the National Security Council.

Trump started the morning behind schedule. His meeting with Merkel was delayed about two hours.

Asked about the global warming meeting during a photo-op with Merkel, the president said: ‘We’re having it in a little while.’

He had no reply to a journalist who informed him that it was already underway.

During his meeting with Modi, Trump said that he wants ‘clean air and clean water,’ but made no comment about his decision to withdraw the United States from the Paris climate accord.

He did offer, however, that the climate change discussion would be his next stop. That never materialized. 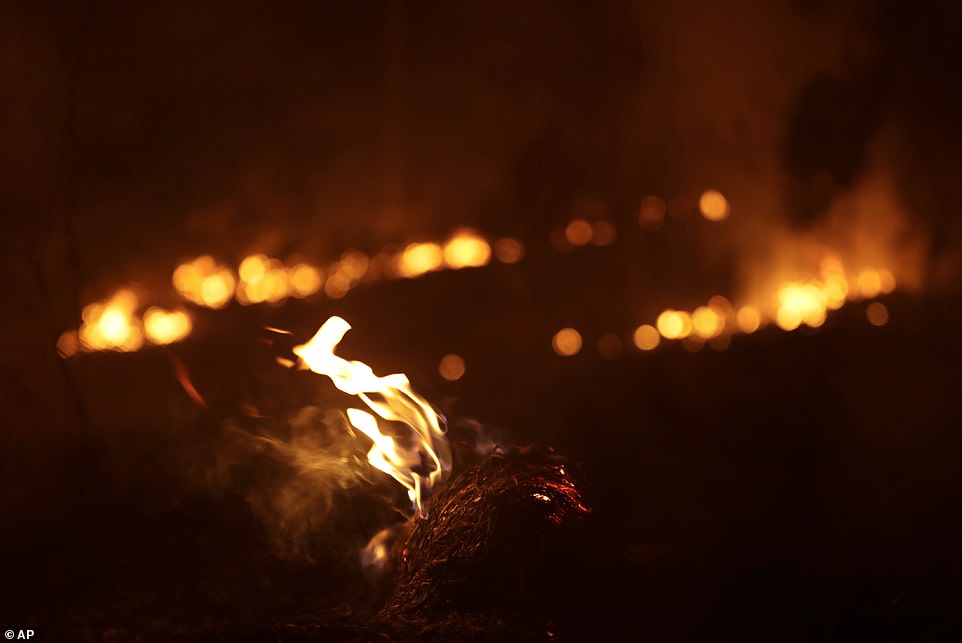 Fires are burning out of control in the Amazon basin in Brazil, leading  many world leaders to sound a new alarm about climate change 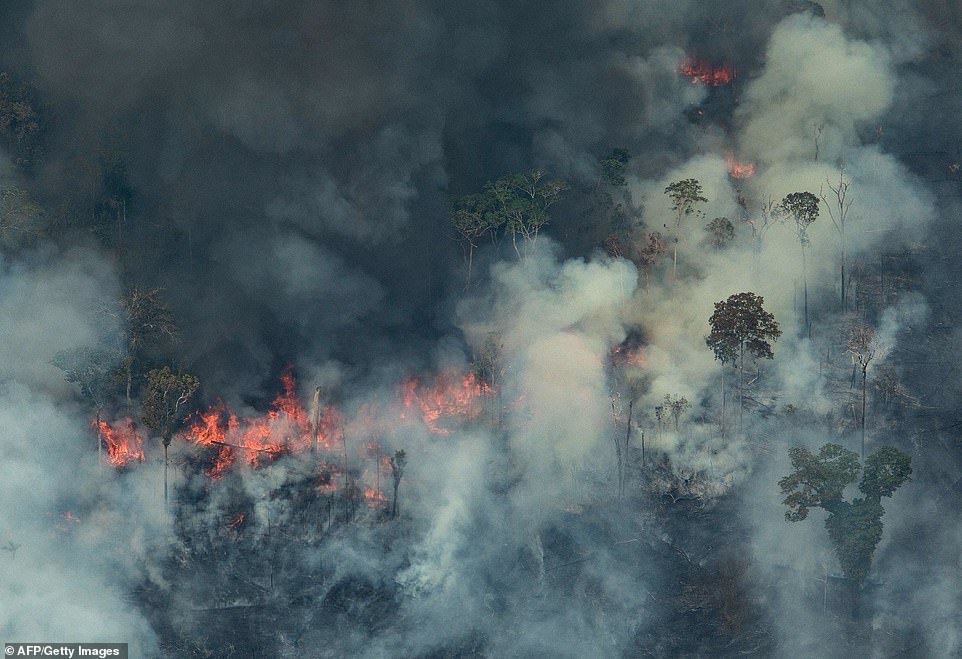 This aerial picture released by an environmental group shows fire raging in the forest in the municipality of Candeias do Jamari, close to Porto Velho in Rondonia State, in the Amazon basin in northwestern Brazil; world leaders pledged a modest $20 million to help

Trump is a climate change skeptic who once claimed it was a hoax invented by the Chinese.

United Nations Secretary-General Antonio Guterres said Monday that the world faces ‘a dramatic climate emergency.’ He will ask leaders at a Sept. 23 summit in New York to agree to cut greenhouse gas emissions by more than they promised in the 2015 Paris agreement.

Guterres said Monday that ‘we are much worse than we were during Paris … and so it’s absolutely essential that countries commit themselves to increase what was promised.’

Guterres claimed that Greenland’s ice cap was melting ‘dramatically’ and that 2015 through 2019 were ‘the five hottest years on record.’