Donald Trump has slammed Don Lemon as the ‘dumbest man on television’ after the CNN host and two guests on his show mocked the President and his ‘credulous boomer rube’ supporters.

Trump lashed out at the CNN host in a tweet on Tuesday over the mocking panel segment that aired on Lemon’s show at the weekend.

‘Don Lemon, the dumbest man on television (with terrible ratings!),’ Trump tweeted with a clip of the CNN segment.

His daughter Ivanka Trump also weighed in by tweeting: ‘You consistently make fun of half the country and then complain that it is divided. The arrogance, mocking accents and smug ridicule of this nation’s ‘Real Elites’ is disgusting’. 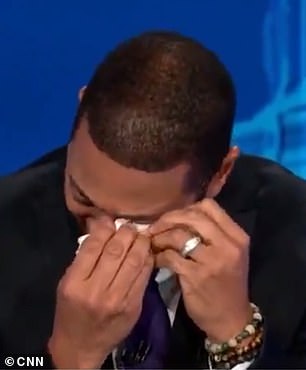 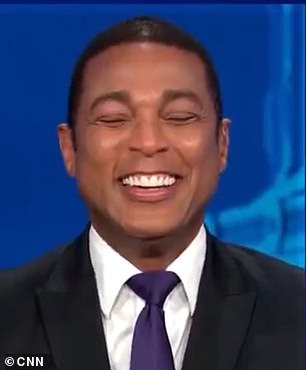 Lemon laughed hysterically throughout the segment and, at one point, wiped tears from his eyes as his guests put on accents to mock Trump and his supporters

The backlash came after the CNN host started crying with laughter when his two guests – ex-Republican strategist Rick Wilson and NYT columnist Wajahat Ali – suggested Trump’s supporters were uneducated and couldn’t point out countries on a map.

The panel were discussing Secretary of State Mike Pompeo’s testy interview with an NPR reporter about Ukraine and ousted U.S. Ambassador Marie Yovanovitch.

Following the interview, the reporter said Pompeo cursed at her and repeatedly ‘used the F-word’ and asked her: ‘Do you think Americans care about Ukraine?’

Both of Lemon’s guests were critical of Pompeo’s response to the interview and put on accents as they mocked Trump and his supporters.

‘(Pompeo) knows deep in his heart that Donald Trump couldn’t find Ukraine on a map if you had the letter ‘U’ and a picture of an actual physical crane next to it,’ Wilson said.

‘He knows that this is an administration defined by ignorance of the world. That’s partly him playing to their base and to their audience, the credulous boomer rube demo that backs Donald Trump that wants to think that ‘Donald Trump’s the smart one and y’all elitists are dumb!’.’ 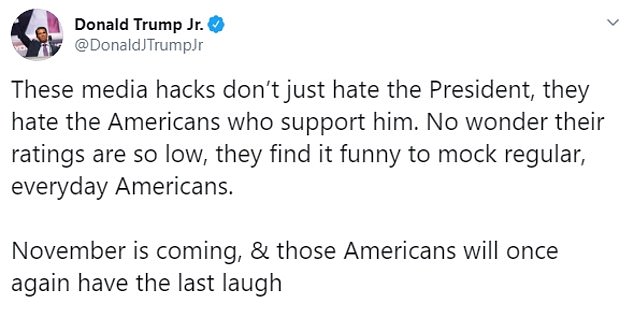 Ali also joined in saying: ”You elitists with your geography and your maps and your spelling… your readin’, your geography, knowin’ other countries. Only them elitists know where Ukraine is,’ he said.

Lemon laughed hysterically throughout the segment and, at one point, wiped tears from his eyes.

‘That was a good one. I needed that,’ Lemon said.

The backlash against Lemon and CNN was swift with Trump and his daughter Ivanka among those lashing out.

His son, Donald Trump Jr., tweeted: ‘These media hacks don’t just hate the President, they hate the Americans who support him. No wonder their ratings are so low, they find it funny to mock regular, everyday Americans. November is coming, & those Americans will once again have the last laugh’.

Meghan McCain, who has been critical of Trump also weighed in, saying: ‘You can’t complain about the country being divided and then blatantly exhibit such sheer disgust at the side you disagree with. All Trump has to do is clip this from @CNN and he had a very effective ad for 2020’.

Congressman Ken Buck tweeted: ‘I’m disappointed to see this kind of smug rhetoric from Don Lemon and his guests. Painting a majority of Americans as illiterate and uneducated ‘rubes’ is low, even for CNN.’