President Donald Trump on Sunday slammed a retiring Republican senator who criticized his decision to withdraw U.S. troops from Syria and suggested the president may not seek re-election next year.

In a twitter rant filled with typos, Trump went after Sen. Bob Corker, the chairman of the Senate Foreign Relations Committee who has been critical of the president’s administration.

‘Senator Bob Corker just stated that, ‘I’m so priveledged to serve in the Senate for twelve years, and that’s what I told the people of our state that’s what I’d do, serve for two terms.’ But that is Not True – wanted to run but poll numbers TANKED when I wouldn’t endorse him…..,’ Trump tweeted.

‘….Bob Corker was responsible for giving us the horrible Iran Nuclear Deal, which I ended, yet he badmouths me for wanting to bring our young people safely back home. Bob wanted to run and asked for my endorsement. I said NO and the game was over. #MAGA I LOVE TENNESSEE!,’ he added. 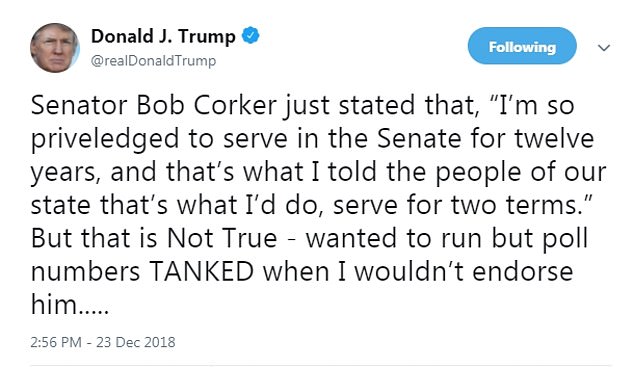 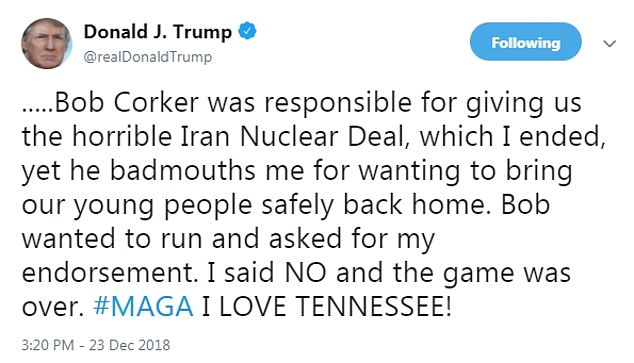 And he slammed Corker for criticizing him for taking U.S. troops out of Syria 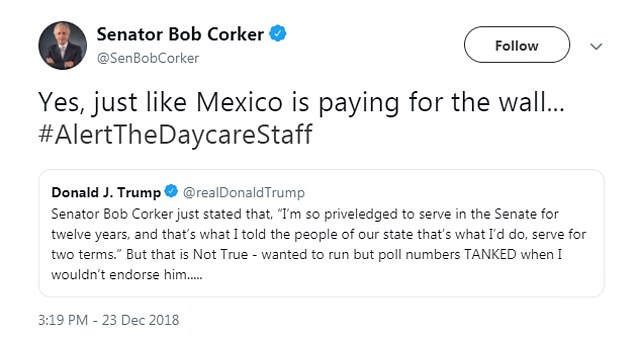 Corker was on CNN’s ‘State of the Union’ on Sunday where he was highly critical of the president’s actions on the government shut down and in removing troops from Syria.

He responded to the president’s tweet with one of his own.

‘Yes, just like Mexico is paying for the wall… #AlertTheDaycareStaff,’ he wrote.

Trump claimed from the start of his campaign Mexico would pay for his $5 billion border wall despite the U.S.’s neighbor to the South saying it would not.

Later the president argued the money would come from taxes brought in from the new trade deal with Mexico, an assertion that has faced questions.

‘Thanks @RandPaul “I am very proud of the President. This is exactly what he promised, and I think the people agree with him. We’ve been at war too long and in too many places…spent several trillion dollars on these wars everywhere. He’s different…that’s why he got elected,’ Trump wrote. 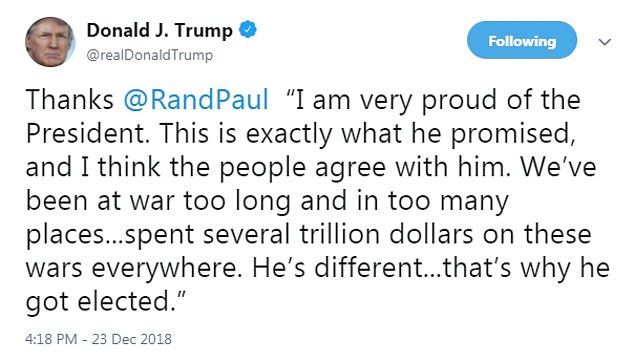 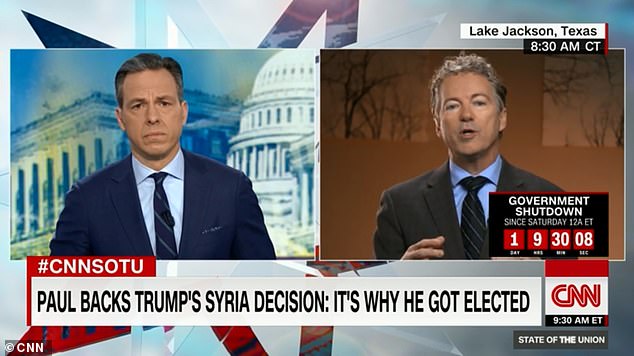 Paul praised Trump in an appearance on the same CNN show where Corker criticized the president.

‘I’m very proud of the president. This is exactly what he promised. And I think the people agree with him, actually. I think people believe we’ve been at war too long in too many places and we do need to turn attention to problems we have at home here. Roads, bridges, schools,’ Paul said on CNN’s ‘State of the Union.’

The twitter fight between Trump and Corker comes as the government shut down at midnight Friday over Trump’s insistence for $5 billion for his border wall and Democrats only wanting to give $1.3 billion.

Corker told CNN the ‘next three months is going to be a very important three months for our country’ and suggested Trump may not seek another term in 2020.

‘I’m proud to have served in the Senate, I so am. For 12 years. That’s what I told people in our state I would do, serve for two terms. I do wish I was serving for 12 years and three months. I think this next three months is going to be a very important three months for our country. I’m cheering the guys on that are there. But I think this next three months could well determine whether he decides to run again or not. I think it will be very important for our country that the United States Senate really dig in and make sure we not make other colossal mistakes as it relates to foreign policy,’ he said of Trump.

Corker similarly questioned the president’s commitment to a second term in the New York Times.

‘I question whether he runs again,’ Corker told the paper last week. ‘He’s having difficulty handling the situation. I don’t think he understands the seriousness of what he just did in Syria.’

The senator told CNN it was hard to understand Trump’s decision to pull the 2,000 U.S. troops out of Syria.

‘We were going to leave Syria. But to leave it when you’re within a couple of months of doing something that is very important in the fight against ISIS and the president knows that, and we pull – jerk the rug out from under two months in advance, that’s hard to understand,’ he said.

Corker has been one of the biggest Republican critics of the president’s decision. He was at the White House on Thursday, waiting to meet with Trump on the issue, when the president abruptly canceled the meeting before Corker could see him.

The senator said he thinks Trump realizes he made a mistake with his Syria decision.

‘I think he knows that he has made a mistake. I do. The president’s tendencies are to dig in and double down even if he knows he did something incorrect. I don’t think he wanted to talk about Syria that day and so the meeting was called off. And in a that’s what happened,’ Corker said.

He was also critical of Trump’s role in the government shut down.

‘This is a made-up fight so the president can look like he’s fighting, but even if he wins, our borders are going to be insecure,’ Corker said.

‘It’s juvenile. The whole thing is juvenile,’ he added.

Corker announced in September 2017 that he would not seek a third term in the Senate amid speculation he would get a primary challenge from the right after several bruising battles with Trump.

He and the president have had an up-and-down relationship. And this is not the first time Trump has gone after him on Twitter.

Early on they were allies with Trump considering making him secretary of state.

Corker campaigned with Trump in 2016. When he was the GOP nominee, Trump named Corker to his campaign’s national security advisory council. They have even played golf together. 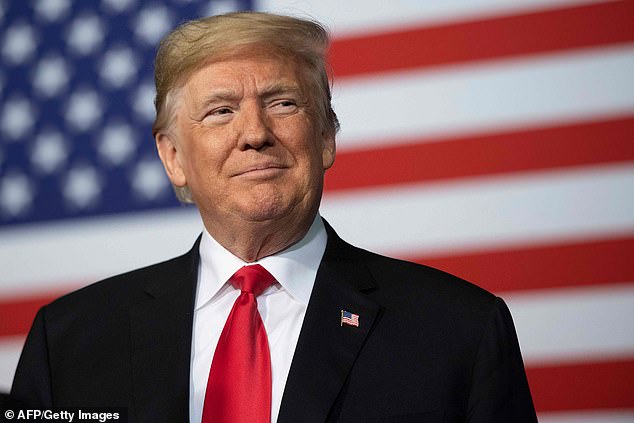 It is not the first time Trump has gone after Sen. Bob Corker 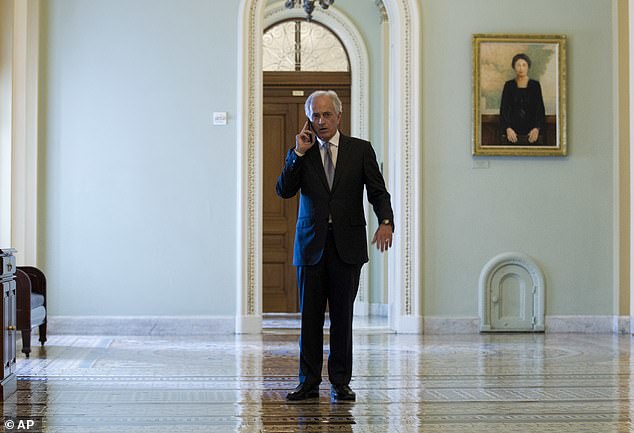 Retiring GOP Sen. Bob Corker criticized Trump’s decision to take U.S. troops out of Syria, slammed him on the government shutdown and suggested he may not run again in 2020 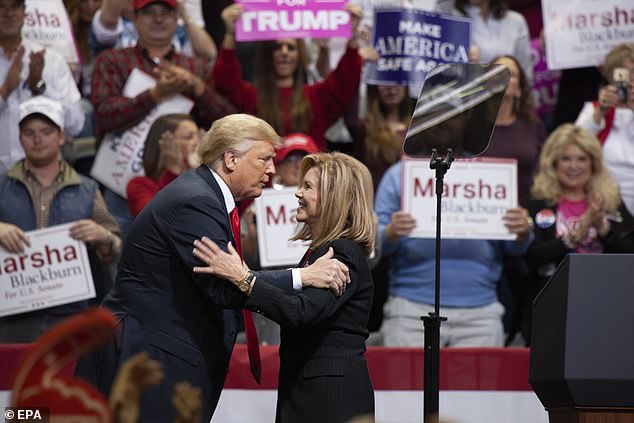 Trump endorsed and campaign for Rep. Marsha Blackburn (seen with her at a November campaign rally) for Corker’s seat and she won election in 2018

But the falling out appears to have begun when Corker was critical of Trump’s handling of a white supremacist rally in Charlottesville, Va., in August 2017.

More than 30 people were injured when white nationalists marched in protest of a removal of a statute of Confederate General Robert E. Lee and clashed with counter protestors.

In his initial statement on the rally, Trump did not denounce white nationalists explicitly, instead condemning ‘hatred, bigotry, and violence on many sides.’

His statement and his subsequent defenses of it, in which he referred to ‘very fine people on both sides’, were seen by critics as implying moral equivalence between the white supremacists and the counter protestors.

Corker spoke out furiously against the president.

‘The President has not yet been able to demonstrate the stability nor some of the competence that he needs to demonstrate in order to be successful,’ he said at the time.

‘He has not demonstrated that he understands what has made this nation great and what it is today, and he’s got to demonstrate the characteristics of a president who understands that,’ he noted.

His criticism continued from there.

In October 2017, Corker told the New York Times Trump ran the West Wing like ‘a reality show’ and his reckless threats to other nations could put the U.S. ‘on the path to World War III.’

Corker said he was alarmed about a president who acts ‘like he’s doing ‘The Apprentice’ or something.’

‘He concerns me,’ Corker said. ‘He would have to concern anyone who cares about our nation.’

Trump fired back via Twitter, claiming Corker begged for his endorsement in 2018 and asked to be secretary of state.

‘I know for a fact that every single day at the White House, it’s a situation of trying to contain him,’ Corker told The Times in response.

Corker developed a reputation in the Senate for being reliable but overtly partisan.

He opposed then-President Barack Obama’s nuclear deal with Iran, but he did not prevent it from coming to a vote on the Senate floor.

Conservative critics blamed him for its passage – a theme Trump has picked up on time and again in his criticism of Corker.

In February Corker briefly re-considered his decision to retire.

He ultimately passed on running again.

Trump endorsed Republican Rep. Marsha Blackburn and campaigned heavily for her. She won the seat in November.