Donald Trump bashed Princeton University’s trustees on Monday for their decision to nix the 28th president’s name from the Woodrow Wilson School of Public and International Affairs amid increasing calls for historical figures’ statues and monuments to be removed.

He also claimed Democrats are exhibiting ‘stupidity’ by pushing for actor John Wayne’s name and statue to be removed from an airport in Orange County, California.

‘Can anyone believe that Princeton just dropped the name of Woodrow Wilson from their highly respected policy center,’ the president tweeted Monday morning. ‘Now the Do Nothing Democrats want to take off the name John Wayne from an airport. Incredible stupidity!’

Both Wilson and Wayne during their lives espoused either racist, white supremacist or segregationist views. 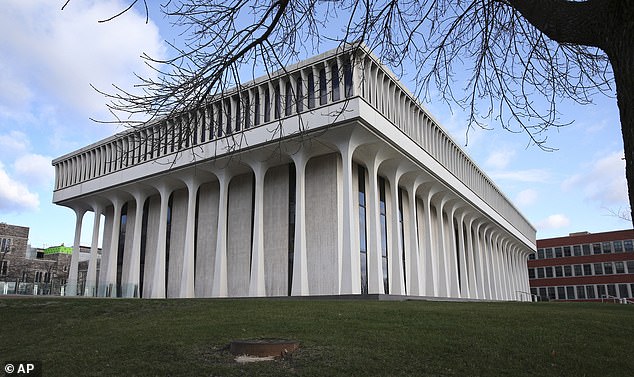 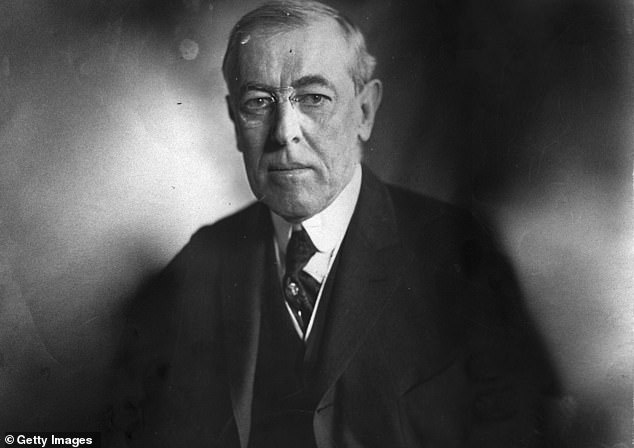 Wilson, who was president of Princeton University before becoming president, was known to be pro-segregation 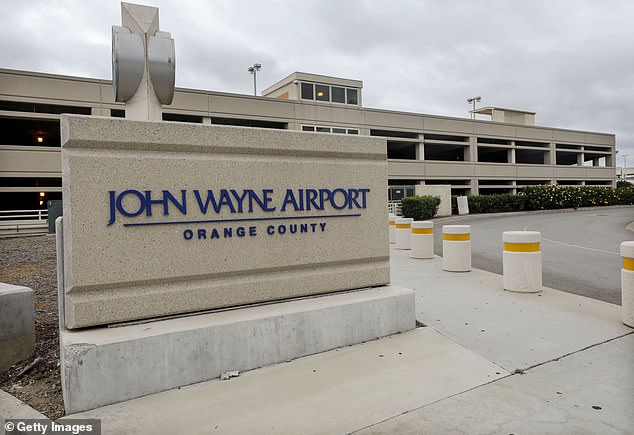 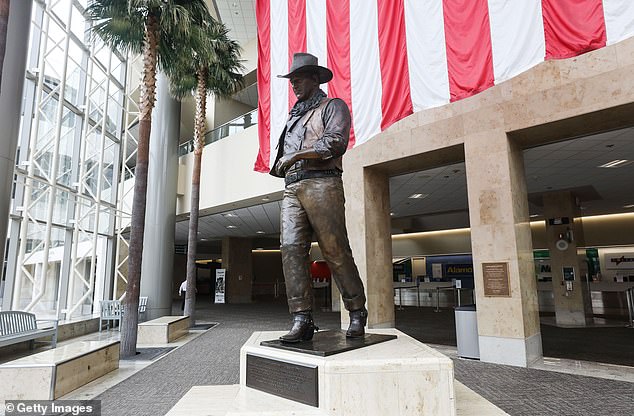 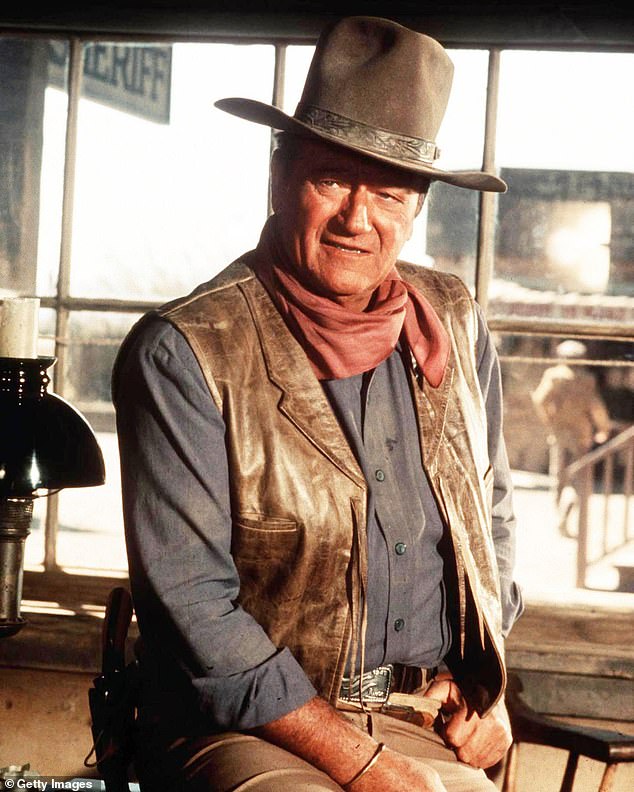 Wayne told Playboy in a 1971 interview: ‘I believe in white supremacy’ and bashed movies for including gay characters

Wilson was lauded by southern segregationist when he came to power and during his presidency was a supporter of racial segregation.

Before becoming president in 1913, he served as Princeton University’s president from 1902–1910 and was governor of New Jersey for the two years in between serving as president of the Ivy League school and the United States.

The New Jersey university’s president claimed Saturday that Wilson’s name is being dropped from the school because of the former president’s ‘racist thinking and policies make him an inappropriate namesake for a school or college.’

Democrats in Orange County have been pushing for a resolution to remove the likeliness of Wayne from the airport since February 2019. The effort has resurfaced amid calls from Civil Rights activists, groups and protesters for tributes to Confederate soldiers and others who owned slaves or had racist views to be taken down.

Wayne admitted to being a white supremacist in an interview with Playboy in 1971, six years before his death – and during the interview expressed derogatory views of black people, Native Americans and bashed movies for including gay characters.

Trump is pushing back against renaming Princeton’s professional school and the southern California airport.

The president said in an interview that aired Sunday evening that those who want statues of slave owners and Confederate figures removed should ‘learn from the history’ or risk ‘going to go back to it sometime.’

But Donald Trump has urged protesters to think again – particularly black Americans who want of the country’s slave-owning founders removed – and claimed ‘we should learn from the history’. 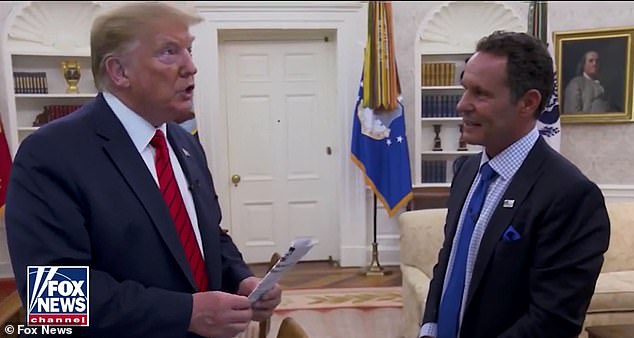 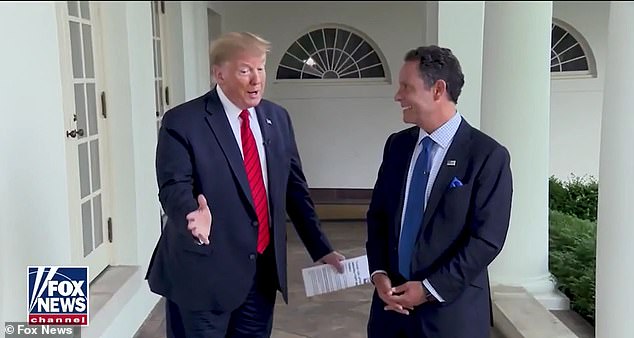 Trump said that he had been upset about questioning of George Washington’s legacy. 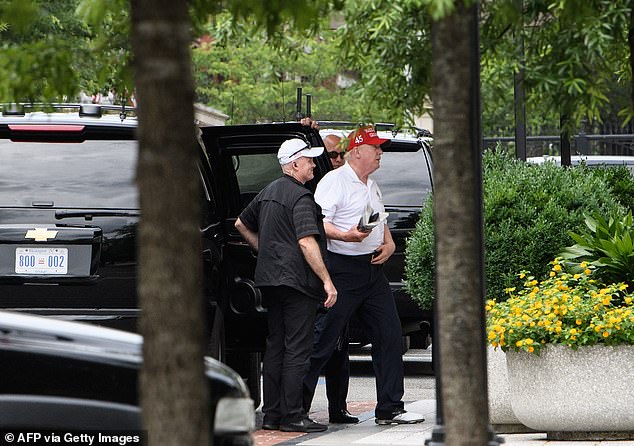 Trump’s latest interview comes on his return to the White House (pictured) following a golfing trip to Virginia this weekend – the 271st golfing trip of his presidency, according to CNN 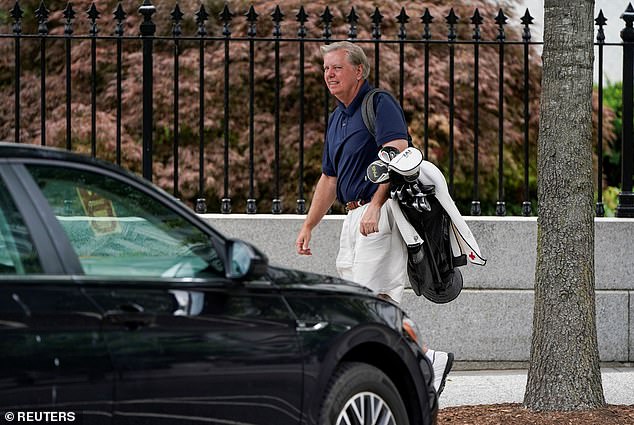 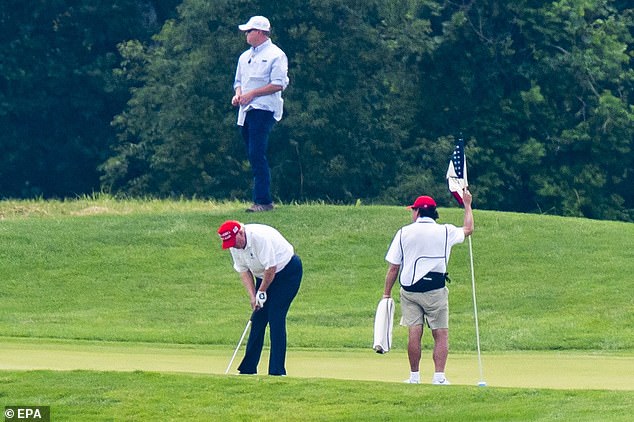 On Friday night, Trump tweeted he would postpone a visit to his golf course in Bedminster, New Jersey amid anti-police protests that have roiled the nation’s capital 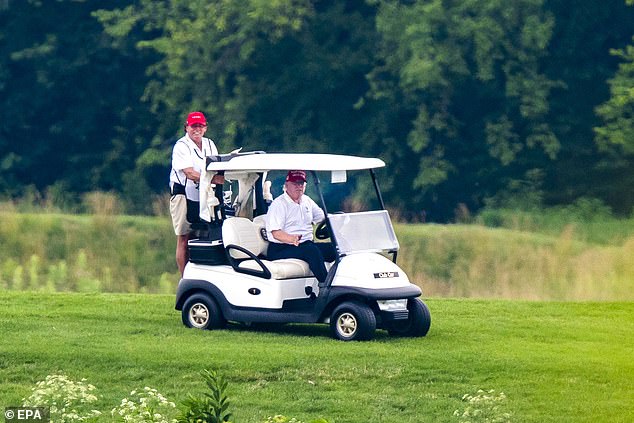 Instead he opted for a Sunday day trip to the Trump National Golf Club in Virginia, which is much closer to the White House 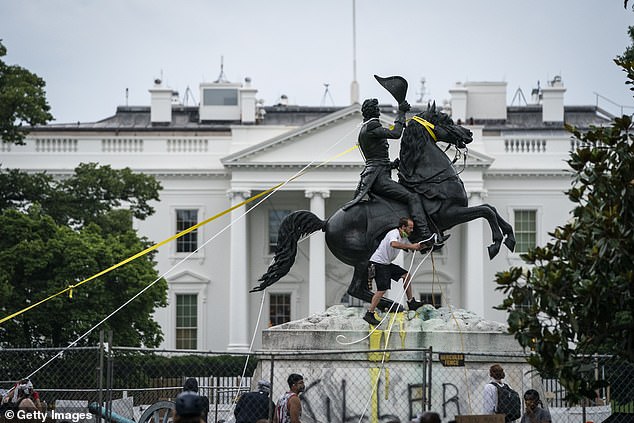 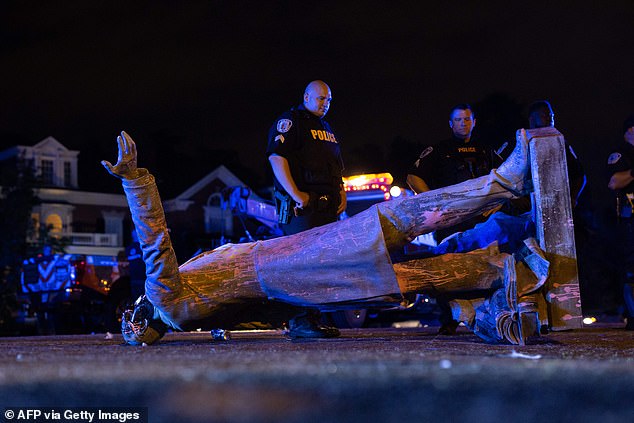 Confederate States President Jefferson Davis lies on the street after protesters pulled his statue down in Richmond, Virginia, on June 10 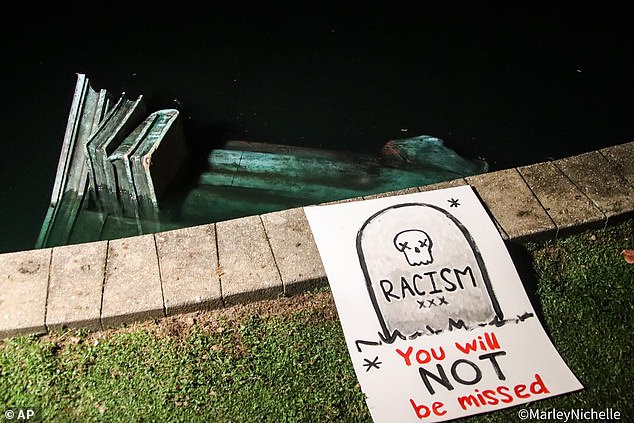 On Friday Trump signed an executive order aimed at protecting monuments and statues, making the issue a priority for the Justice Department.

‘I think many of the people that are knocking down the statues don’t even have any idea what the statue is, what it means, who it is when they knocked down,’ he said on Wednesday. 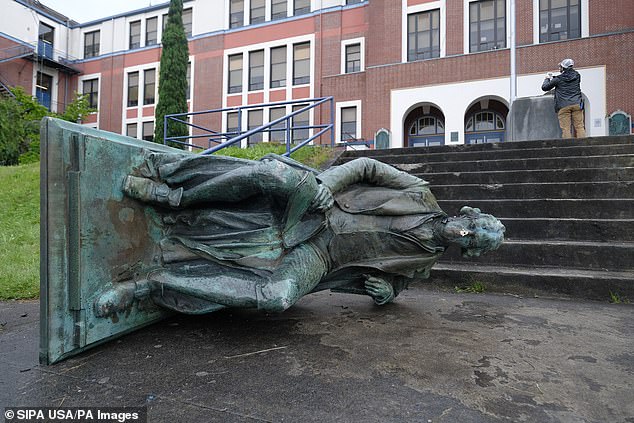 The bronze statue of Thomas Jefferson is severed from its base outside Jefferson High School in Portland, Oregon 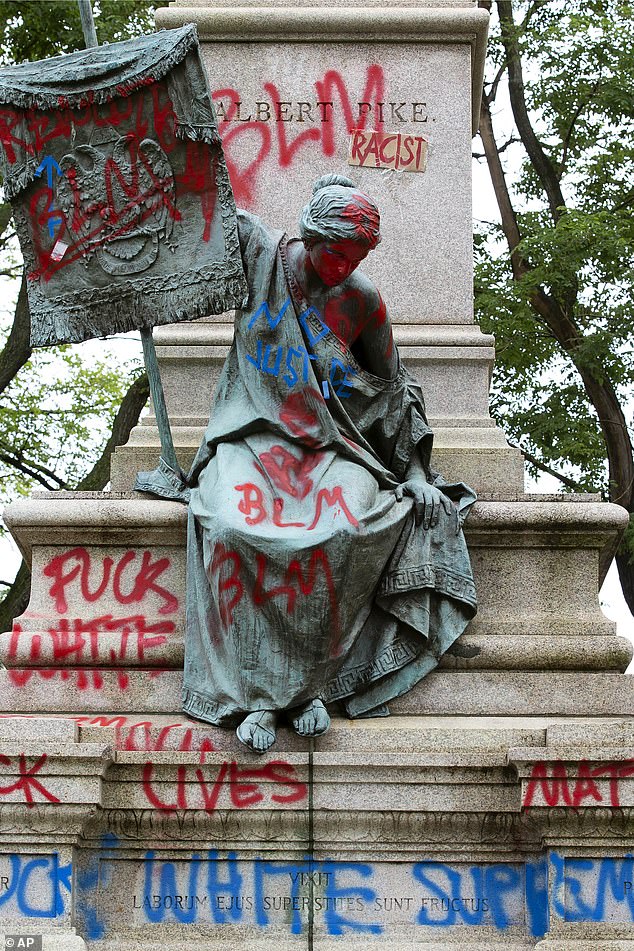 The bronze sculpture representing the Goddess of Masonry on the base of the statue of a Confederate general, Albert Pike, is seen with red paint, after protestors toppled Pike statue’s and set on fire 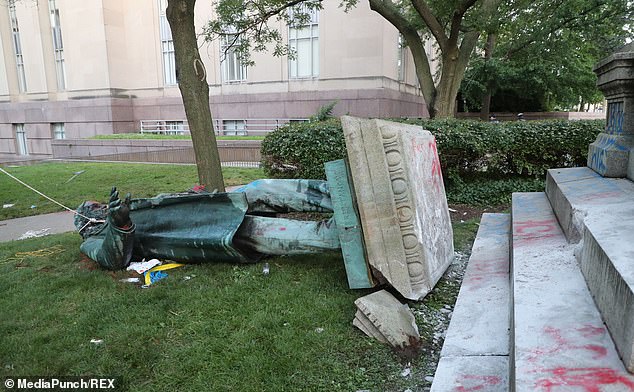 View of a defaced and toppled statue of Confederate Albert Pike, toppled by protesters in Washington D.C.

Trump boasted Sunday morning that no more statues or monuments were defaced this weekend because he signed the executive order. 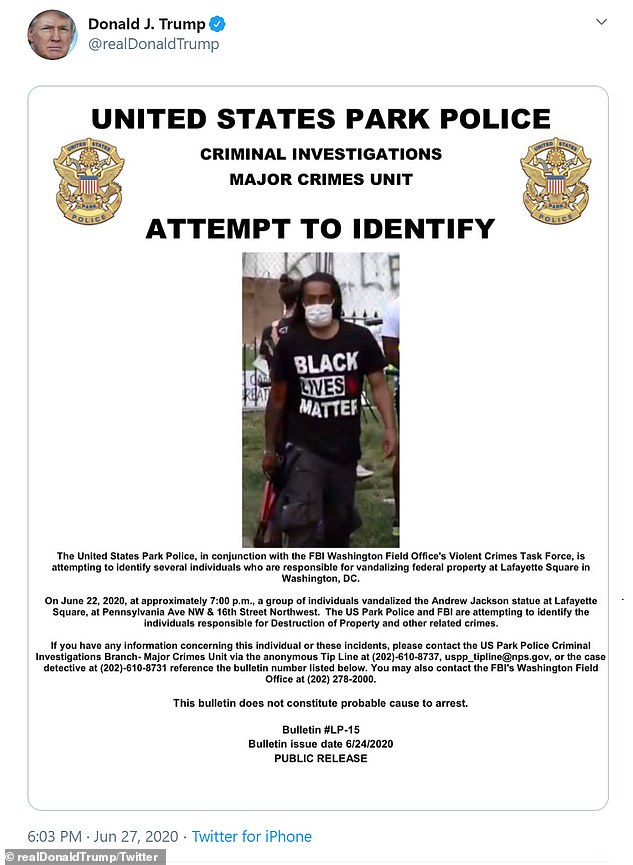 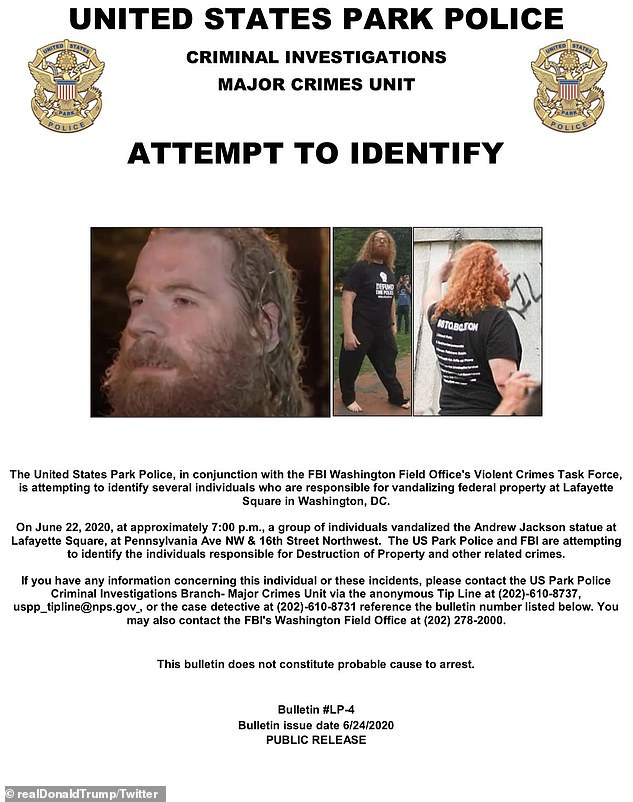 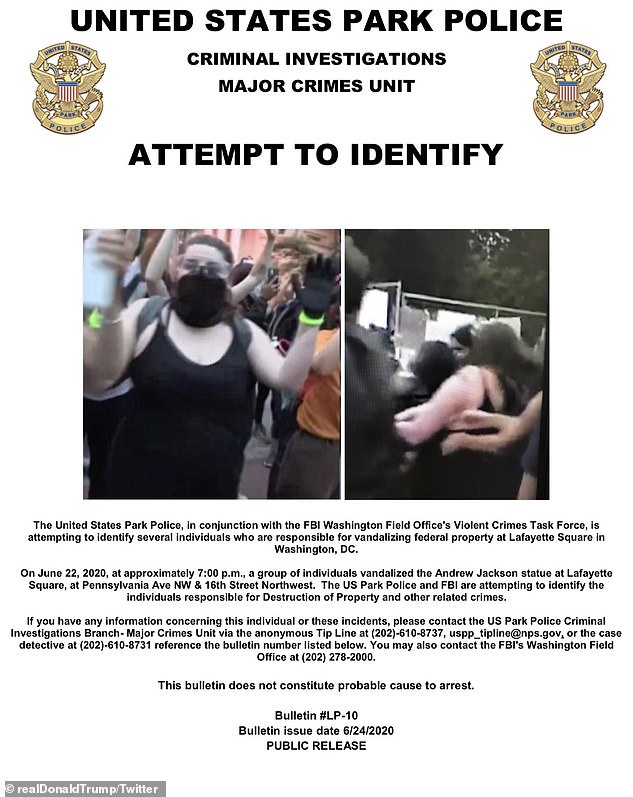 On Saturday he tweeted 15 ‘wanted’ posters for those involved in efforts last week to topple Andrew Jackson’s bronze likeness outside the White House.

Jackson, the seventh president, was a populist who admirers say reformed Washington DC. He is a hero of Trump’s, and Trump chose his portrait to hang in the Oval Office.

Jackson’s detractors point out that he was a slave owner who championed the ‘Trail of Tears’ policy of forcing Native Americans west of the Mississippi.

Four men have so far been charged with destruction of federal property in connection with their alleged effort to tear down the Jackson statue in Lafayette Square on June 22.

The bronze statue has stood there since 1853.

Judd was arrested on Friday and appeared in Superior Court of the District of Columbia on Saturday.

The complaint, which was unsealed Saturday, states that on June 22, the four men participated in damaging the statue alongside other protesters, while also being captured on video ‘attempting to pry the statue off its base with a wooden board and trying to pull the statue down with the aid of a yellow strap.’

It also claims there is video evidence showing ‘Lloyd as he breaks off and destroys the wheels of cannons located at the base of the statue.’

The document states: ‘Lloyd is then captured on video pulling on ropes in an effort to topple the statue and handing a hammer to an unidentified individual involved in the incident.’

Trump’s latest interview comes on his return to the White House following a golfing trip to Virginia this weekend.

The president’s motorcade was seen snaking in to the Trump National Golf Club in Sterling, Virginia, just outside of DC late Saturday morning.

According to CNN, the golfing expedition was the 271st of Trump’s presidency.

On Friday night, the Commander-in-chief tweeted that he would be postponing a visit to his golf course in Bedminster, New Jersey amid anti-police protests that have roiled the nation’s capital.

He instead opted for the Virginia course, which is closer to his White House home, and left Sunday.

That same day, Trump was forced to deleted a post where he shared a video of senior citizens clashing over their support and opposition of him where one pro-Trump protester could be heard yelling ‘white power.’

The White House claimed the president didn’t hear the ‘white power’ comment and was instead focused on the support he was witnessing from citizens of the Florida senior community.

‘He did not hear the one statement made on the video,’ White House spokesman Judd Deere told NBC News. ‘What he did see was tremendous enthusiasm from his many supporters.’

‘White Power’: One Trump supporter in the golf cart parade yelled ‘white power’ about eight seconds into the video as he held up a fist at senior-citizen counter protesters by the side of the road 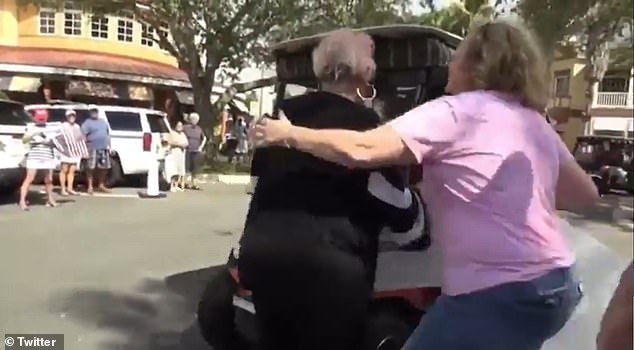 The ‘white power’ comments is shouted just eight seconds into the video.

The golf-carts full of supporters paraded as the country continues in its second month of unrest as confrontations ensue between civil rights protesters and law enforcements.

The video was posted to Twitter by another user on Saturday and shows two-minutes of clashes between citizens of The Villages, a massive age-restricted community in Sumter, Florida, between pro-Trump demonstrators and senior counter protesters denouncing the president.

‘Thank you to the great people of The Villages,’ Trump posted Sunday alongside the video. ‘The Radical Left Do Nothing Democrats will Fall in the Fall. Corrupt Joe is shot. See you soon!!!’

Toward the beginning of the video, one senior citizen protesting for Trump yells ‘White Power,’ as he golf-cart passenger chants ‘Trump.’

‘There you go, white power. Did you hear that?’ a counter protester standing by the side of the procession responded in awe.

He deleted the tweet after outcry on social media – including from those within his own party.