Trump slaps back at critics of his ‘America First’ slogan: ‘Racist? Why is that racist?’

President Trump slapped back at critics of his ‘America First’ slogan on Friday, asking a summit of young black conservatives why his opponents believe it’s ‘racist’ to pledge to put the nation first.

People of all races ‘have the right to live in a country that puts your needs first,’ Trump said.

‘I heard this one a couple of weeks ago. I said, “Give me a break!” They said, “America first! That could be racist!” I said, “Racist? Racist? Why is that racist?” Trump told attendees the White House event. ‘I think, does everyone in this room agree? You’re living in America. America first, right?’

Trump has been taking flak this week for claiming that he’s a ‘nationalist’ during a rally at which he slammed ‘globalists’ as people who don’t care very much about the country.

President Trump slapped back at critics of his ‘America First’ slogan on Friday, asking a summit of young black conservatives why his opponents believe it’s ‘racist’ to pledge to put the nation first

The president argued that ‘every citizen benefits when we stop foreign countries from cheating our workers’  — a policy position he claimed globalists support.

‘Globalists!’ he said, pointing a chuckling at an attendee who apparently said Trump’s opponents’ should be jailed. ‘Heh, heh. “Lock ’em up.” ‘

The exchange came within minutes of a presidential call for unity at the event where Trump announced that a suspect targeting his political opponents had been taken into custody in connection with a string of attempted bombings.

‘We must never allow political violence to take root in America. Cannot let it happen. And I’m committed to doing everything in my power as president to stop it and to stop it now. To stop it now,’ Trump said.

He claimed shortly after that he was personally under ‘attack’ by Democrats and the media — ‘maybe more than anybody’ — as he declared his movement one of ‘tolerance and unity and progress’ in remarks at the event that was held at the White House.

He again embraced the term on Tuesday, telling a reporter: ‘I love our country. And our country has taken second fiddle.’

The president claimed in the Oval Office that he was unaware that the term had racist connotations.

‘I’ve never even heard that. I cannot imagine that,’ he said of claims that the term is a racist dog-whistle. ‘I never heard that theory about being a nationalist. I’ve heard them all. But I’m somebody who loves our country, when I say a nationalist.’

He said he was referring to wealth the United States passes on to countries that ‘don’t treat us properly’ through trade deals and security organizations.

‘I’m proud of our country, and I am a nationalist. It’s a word that hasn’t been used too much,’ he said. ‘I think it should be brought back.’ 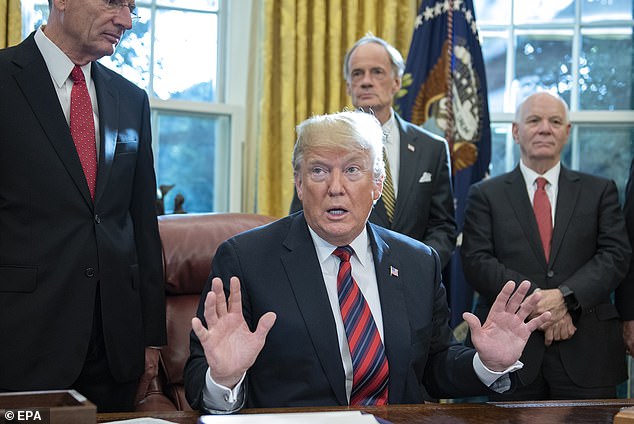 Trump indicated that he was referring to American nationalism rather than white nationalism, which he and his followers have also been accused of promoting.

Former President Barack Obama, for instance, suggested in a blistering September critique of his predecessor that Trump’s policies ‘appeal to racial nationalism that’s barely veiled, if veiled at all’ during a speech in which he claimed  that over the last several decades ;the politics of division, of resentment and paranoia has unfortunately found a home in the Republican Party.’

The nationalist label has also been used to describe former White House aide Steve Bannon, who was ousted as Trump came under scrutiny last year for claiming that ‘both sides’ were to blame for the violence that erupted at a race riot.

Trump gave his supporters permission to use the term ‘nationalist’ to describe themselves at a Monday night rally. He dubbed himself a nationalist, too, in the remarks in which he contrasted his world view with so-called globalists like Obama.

J Street, a liberal group that fights anti-Semitism and promotes policies that are pro-Israel, attacked Trump after the event as ‘deploying intensely xenophobic rhetoric and imagery — including anti-Semitic tropes — in a transparent attempt’ to rally the base before the mid-term elections.

‘Like his credo “America First,” Trump’s “nationalism” is clearly rooted in a long legacy of xenophobia on the American far right,’ the group said in a statement. ‘The term “globalist” is used constantly by the white nationalist alt-right as an anti-Semitic dog whistle against Jewish people.’ 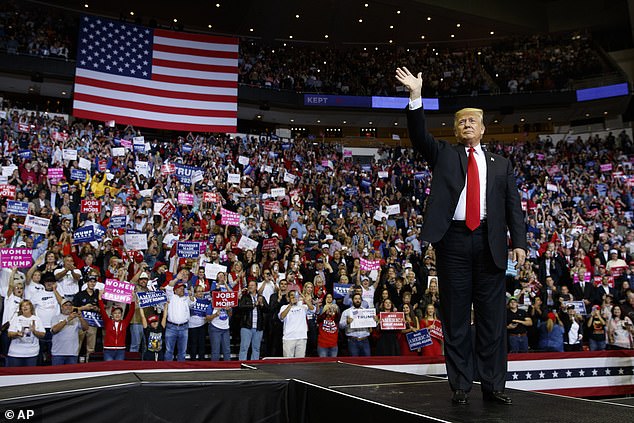 Trump gave his supporters permission to use the term ‘nationalist’ to describe themselves at a Monday night rally. He dubbed himself a nationalist, too, in the remarks in which he contrasted his world view with so-called globalists like Obama

Asked what he was trying to signal with his embrace of the term at Monday’s rally, the president specifically pointed to international agreements that have long been derided as turning the United States into the world policeman.

‘If you look at the trade deals, and nobody knows it better than me. I’m knocking out some of the worst deals I’ve ever seen. When we’re giving all of our wealth, all of our money, to other countries,’ Trump argued.’And then they don’t treat us properly, where we’re protecting other rich countries. Very, very rich countries.’

He said that he considers Saudi Arabia to one of the countries that has taken advantage of American generosity, linking its contract for arms sales with American companies to it’s admission that it was involved in the brutal murder of journalist Jamal Khashoggi.

‘Immensely wealthy. And we’re taking care of their military for a fraction of the cost. Not fair to us,’ he said of the arms deal and American military assistance to its operation in Yemen.

He said he was talking about ‘other countries also’ that he later identified as Germany and China.

‘Immensely wealthy countries, and we have to get reimbursed for that. We should not be the world’s policekeeper and not get reimbursed,’ he stated.

Trump claimed that other nations are not paying what he sees as their fair share because they’ve never been asked to by his predecessors.

‘And by the way, when I bring up to the heads of countries like Japan, prime minister Abe, a friend of mine, I bring it up, he looks at me and he goes, I understand,’ Trump said, retelling a story he’s used to back up his position on the issue in the past.

Coming back to the topic later, he professed: ‘I am very proud of our country. We cannot continue to allow what’s happened to our country to continue happening. We can’t let it happen.

‘I’m proud of our country, and I am a nationalist. It’s a word that hasn’t been used too much. Some people use it,’ he acknowledged. ‘But i’m very proud. I think it should be brought back. I’m somebody that wants to help other countries of the world, but I also have to take a — we have to take care of our country. We cannot continue to allow ourselves to be duped on military and also duped on trade.’

At a rally in Houston on Monday night, Trump had proudly declared himself to be a ‘nationalist’ – a descriptor that Democrats like Obama have used to describe the sitting president in verbal assaults on his politics.

He then encouraged the crowd to ‘use that word,’ regardless of its negative connotations, while he railed against ‘globalists’ that never put America first.

‘Radical Democrats want to turn back the clock. Restore the rule of corrupt, power-hungry globalists,’ he claimed. ‘A globalist is a person that wants the globe to do well, frankly not caring about our country so much. And, you know what? We can’t have that.’