President Donald Trump has set aside time for talks at the United Nations General Assembly with Egypt’s dictator, the British prime minister, and the French president and yet he won’t have time this week to meet with Canada’s Justin Trudeau.

Trudeau is at the annual gathering in New York City, where he’s due to deliver a speech on Tuesday morning at the Council on Foreign Relations just before Trump’s United Nations remarks.

An informal chat with Trump is all that Trudeau could hope for, however, as the U.S. on Monday confirmed that a meeting with the Canadian prime minister is not on Trump’s schedule.

‘The president’s schedule is very compressed this year in New York, so there were a lot of requests and a lot of desires by the president to have bilaterals that simply couldn’t be accommodated,’ U.S. National Security Advisor John Bolton said.

President Donald Trump has set aside time for talks at the United Nations General Assembly with Egypt’s dictator, the British prime minister, and the French president and yet he won’t have time this week to meet with Canada’s Justin Trudeau 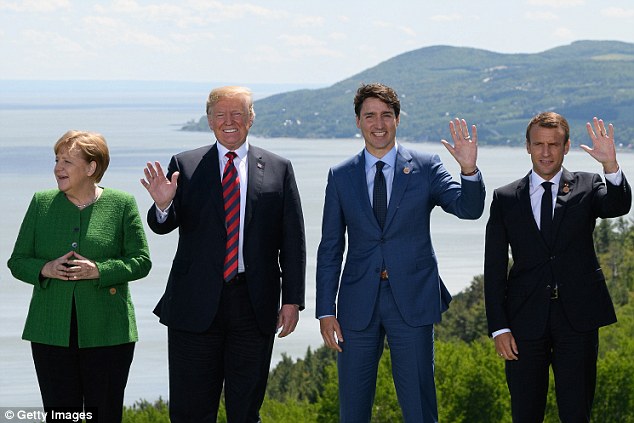 BETTER DAYS: Trump waves to media as he stands next to German Chancellor Angela Merkel, Trudeau, and  French President Emmanuel Macron wave during a family photo at the G7 Summit in Canada this past summer 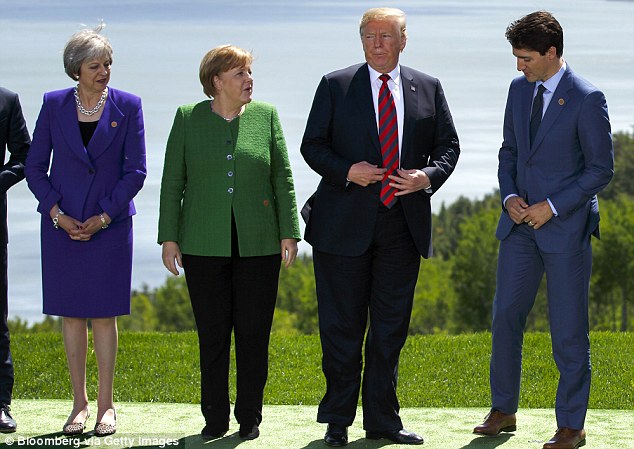 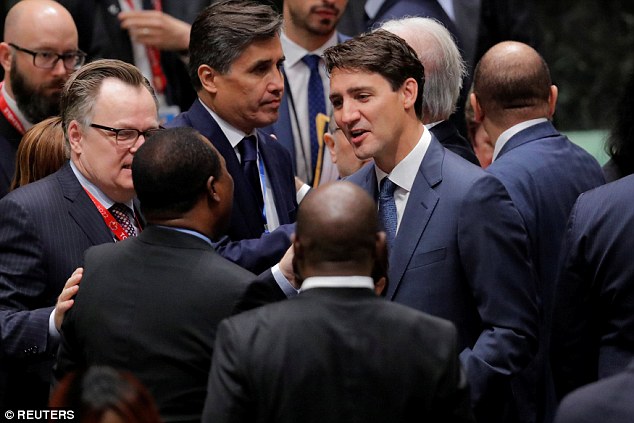 Trump and Trudeau had a falling out after the G7 summit last June in Charlevoix over the president’s steel and aluminum tariffs. Trudeau is seen here greeting other visiting leaders on Monday at the UN 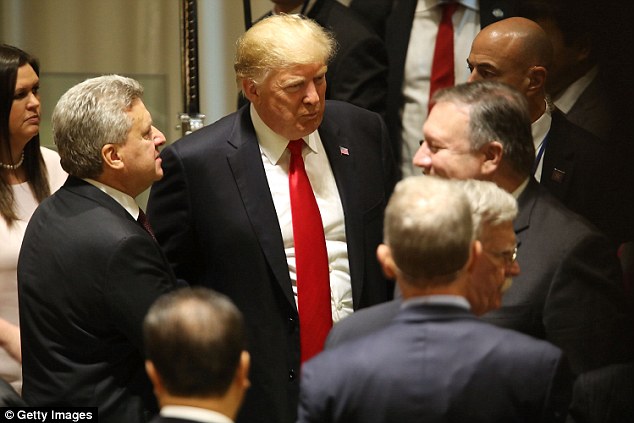 At a White House press briefing, Bolton told DailyMail.com that President Trump ‘speaks with Prime Minister Trudeau by phone all the time.’

‘And it’s always possible here in New York that they would have time for a pull aside, as we call it,’ Bolton asserted, ‘but there is full and open and complete communication between Prime Minister Trudeau and President Trump, that I can assure you.’

Why exactly Trump was unable to accommodate Trudeau on Monday, even though he had more than five hours of free time on his schedule in New York was left unexplained.

Trump and Trudeau had a falling out after the G7 summit last June in Charlevoix over the president’s steel and aluminum tariffs. The White House says their necessary for national security, but Trump has said point blank that he’s striving to resolve what sees as a massive trade imbalance with the Canadians.

After a happy reunion, Trudeau unleashed on Trump at a press conference after the U.S. leader was already in the air en route to a summit with Kim Jong-un in Singapore.

‘I highlighted directly to the president that Canadians did not take it lightly that the United States has moved forward with significant tariffs,’ Trudeau said at the news conference. ‘Canadians, we’re polite, we’re reasonable, but we will also not be pushed around.’

Trump unloaded on Trudeau in response as ‘very dishonest & weak’ in a tweet as he announced his intent to withdraw from the seven-nation joint communique.

‘Justin’s false statements at his news conference, and the fact that Canada is charging massive Tariffs to our U.S. farmers, workers, and companies, I have instructed our U.S. Reps not to endorse the Communique as we look at Tariffs on automobiles flooding the U.S. Market!’ Trump said.

At a press conference of his own before leaving the conference, Trump grumbled about ‘unfair trading practices’ that are disadvantaging the U.S.

‘The United States has been taken advantage of for decades and decades and we can’t do that anymore,’ he stated.

The day after Trudeau lashed out at Trump, the president’s top economic adviser, Larry Kudlow, hit the media circuit to rip the Canadian PM for the unbelievable ‘betrayal,’ claiming to CNN, ‘He really kind of stabbed us in the back.’

Trump’s chief trade adviser, Peter Navarro, similarly told Fox News: ‘There’s a special place in hell for any foreign leader that engages in bad faith diplomacy with President Donald J. Trump and then tries to stab him in the back on the way out the door.’ 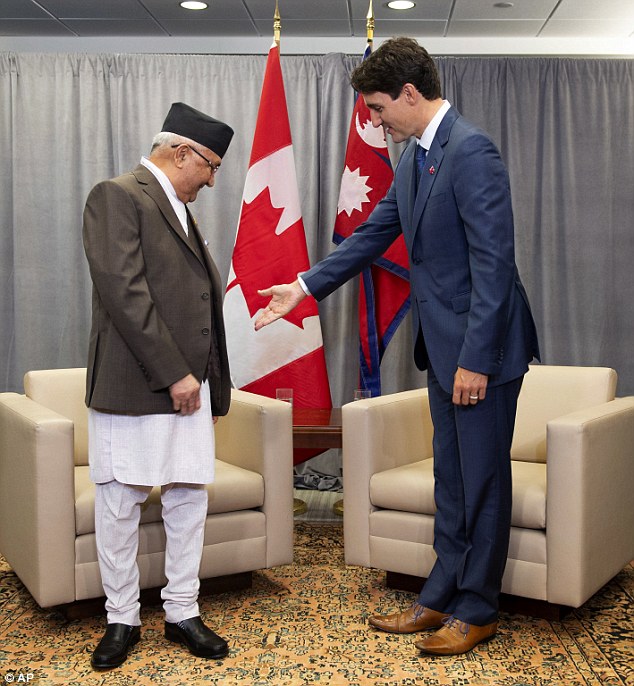 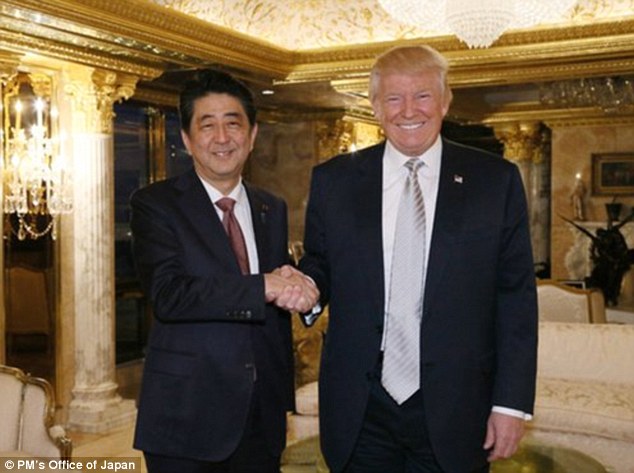 Trump invited the prime minister of Japan to his penthouse in New York on Sunday for dinner, giving the leader and ally extra-special attention, as demonstrated in this hand-out photo

Since the fight began, Trump announced his intent to enter into a trade deal with Mexico that will replace the North American Free Trade Agreement. Canada has not signed onto the new deal the U.S. plans to move on before the newly-elected Mexican president takes office on Dec. 1.

The Canadian foreign minister has been traveling to Washington for talks for weeks, trying to solidify an agreement.

She and Trudeau are speaking immediately before Trump’s speech to the United Nations on Tuesday at the Council on Foreign Relations’ New York location.

Their 8 am remarks will end roughly an hour before Trump’s mid-morning address in New York on the American agenda. They’ll be battling New York traffic to make it back to the United Nations in time, if they plan to be in the audience for Trump’s address.