When Donald Trump spoke to a convention of conservative teens on Tuesday in Washington, he took the stage in front of a video backdrop that included a doctored presidential seal – complete with a Russian emblem and a set of golf clubs.

Instead of ‘E pluribus unum,’ the U.S. motto that means ‘out of many, one’ in Latin, the apparently satirical version sported a new phrase: ’45 es un titere.’ That’s Spanish for ’45 is a puppet.’

In the Seal of the President of the United States, an eagle faces to the left and holds 13 arrows in the talons of its opposite foot. The version that appeared Tuesday replaced the arrows with a set of golf clubs.

The bird, too, was altered: In place of the bald eagle on the U.S. version, unchanged since 1960, it used a two-headed eagle from the Russian coat of arms.

President Donald Trump spoke to Turning Point USA’s Teen Student Action Summit, taking the stage while a doctored parody of the Seal of the President of the United States flashed on a video screen behind him 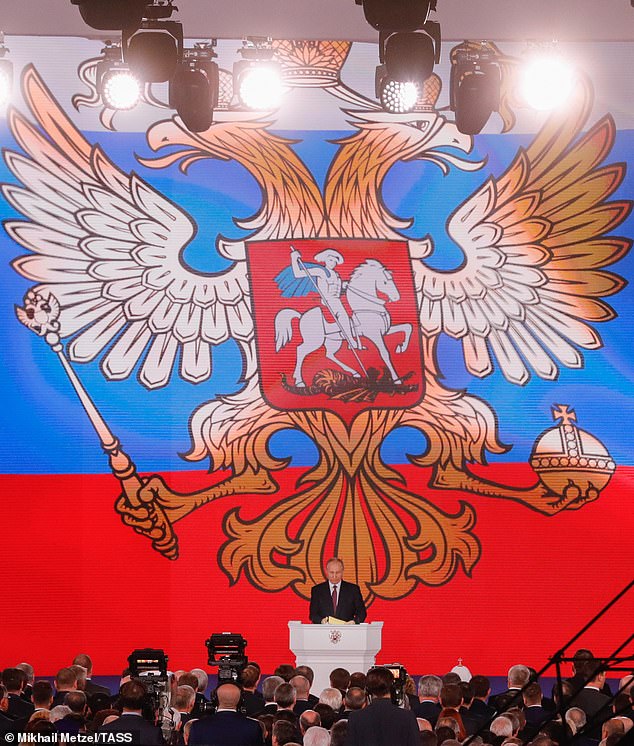 The centerpiece of the altered seal was the double-headed eagle featured on Russia’s coat of arms, pictured here in 2018 as the backdrop to a speech by President Vladimir Putin to the nation’s Federal Assembly 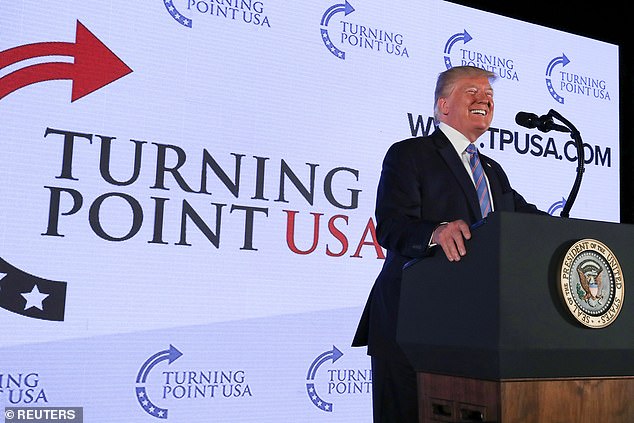 Neither the White House nor Turning Point USA, the group that hosted Trump for Tuesday’s speech, has any idea how the modified seal ended up in photos alongside the leader fo the free world.

A source at Turning Point said Thursday that the organization is ‘chasing down an explanation’ for what it sees as an ’embarrasing’ situation for a group the White House sees as a key ally heading into the 2020 election season.

It appears the image itself was culled from an online retailer called ‘One Term Donnie,’ which sells t-shirts and tote bags featuring the artwork.

Attempts to reach the storefront’s owner on Thursday were unsuccessful. 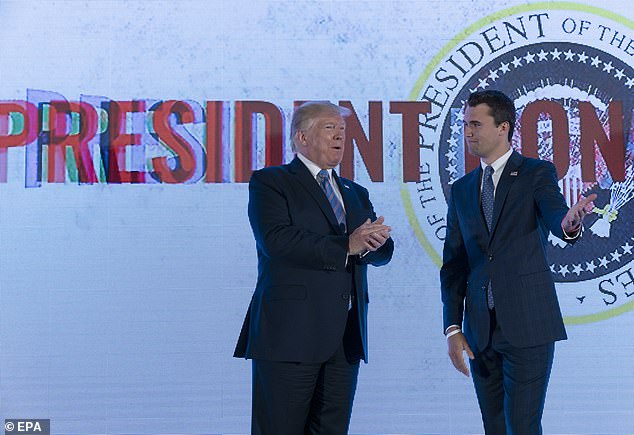 He tossed the blame in the direction of an audio/visual team that included the organization’s staff and employees from the Washington hotel that hosted the convention.

But he was quick to discount the idea of foul play and blame adolescent sloppiness instead.

‘I think it was as simple as a rushed move throwing up an image, and it was the wrong one,’ the spokesman said.

The digital art’s reference to a ‘puppet’ is a throwback to a 2016 presidential debate where Hillary Clinton accused the future president of being Vladimir Putin’s ‘puppet.’

‘No puppet! No puppet!’ Trump fired back. ‘You’re the puppet.’

The golf clubs were a Washington tweak at the president for his favorite weekend pastime. He has played, by one estimate, 198 rounds since his inauguration.

And the Russian reference is a jab at Trump over Democrats’ long-held belief that the Kremlin conspired with the president’s campaign aides to swing the election to him in 2016.

Special Counsel Robert Mueller’s 448-page report, submitted to the attorney general in March, concluded that no Americans colluded with the Russians.

The correct presidential seal hung from Trump’s podium while he spoke, as it is during every speech a president gives.

Hundreds of right-wing teens shouted ‘USA! USA! USA!’ as he took the stage, clapping and beaming in front of the retailored image that was more Russian than American.