The White House office responsible for vetting Trump administration political appointees is getting the reputation for being a ‘social hub,’ where drinking and ‘vaping’ are common among the young and often under-qualified staffers.

The Washington Post revealed some of the shenanigans that have been happening inside the Presidential Personnel Office, which is responsible for recruiting and vetting candidates for more than 4,000 government jobs, with more than 1,200 needing the Senate’s approval.

While the work has piled up, the PPO’s offices – located on the first floor of the Eisenhower Executive Office Building – have become a place where other staffers will come and ‘vape,’ smoke electronic cigarettes, on the couches, and drink, with PPO’s leaders hosting multiple happy hours.

FRAT PARTY: The Washington Post reported on shenanigans happening at the Presidential Personnel Office, which is located on the first floor of the Eisenhower Executive Office Building (pictured). which is right next door to the White House

In January, the Post reported, aides played the ‘Icing’ drinking game in the office, to celebrate the deputy director’s 30th birthday.

The classic way the game is played is that Smirnoff Ices are hidden around a room. 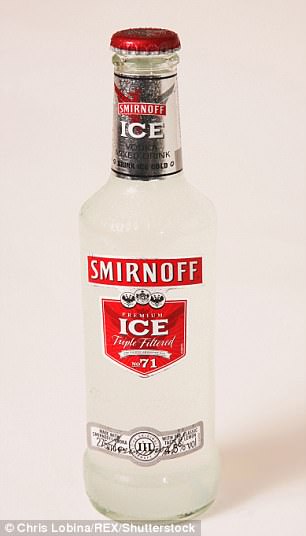 STILL A THING? The White House confirmed that staffers of the Presidential Personnel Office played the ‘Icing’ drinking game, popularized in 2010, as they celebrated the deputy director’s 30th birthday

Once a bottle is found, that person must take a knee and chug the sugary, alcoholic beverage.

Popularized in 2010, participants watching an individual find a Smirnoff will often yell, ‘You just got Iced, bro.’

In the case of the PPO, it was the deputy director who got ‘Iced,’ according to the Post.

The White House didn’t discount that the game was played, confirming it for the Post, but justifying the office happy hours as a way for staffers to network and let off steam.

The White House also told the newspapers that this kind of socialization wasn’t unique to that particular office.

And it’s not that out of bounds for office behavior in Washington, D.C., which is widely known as a happy hour town.

What’s different, the Post captured, is that there are seemingly no adults in the room.

It wasn’t supposed to be that way.

Former New Jersey Gov. Chris Christie, who was President Trump’s original pick to run the transition, had assembled a team of more than 100 researchers and lawyers to generate names of candidates who could fill posts if Trump were to win the election.

After Trump’s surprise win, they delivered those pages to the president-elect, noting the importance of the Presidential Personnel Office, the Post found.

Documents show that Christie’s team believed it was essential to ‘provide the president with outstanding candidates,’ estimating that some-100 people would be needed for the jobs of recruiting and vetting.

‘Building a strong team to lead U.S. government agencies is not only critical to the effectiveness of the president, but also for the welfare of the nation,’ the documents said, according to the Post.

However, three days after the presidential election, Trump fired Christie and his team, and rebooted the transition.

‘The idea that you can take six months of work … and throw all that out, turned out to be a big mistake,’ Christie later said.

Now, a year, two months and 10 days into the new administration, the PPO has never caught up.

DeStefano had basically no staff going in, with the president’s personnel team increasing to about 30 aides directly after the inauguration, and not growing bigger since, the Post found.

DeStefano’s deputy became a former campaign aide who was the one holdover from the Chrstie transition, then 28-year-old Sean Doocey.

Doocey is now in charge of the day-to-day operations of the PPO, with DeStefano getting promoted in February to assistant and counselor to the president.

According to the Partnership for Public Service the Trump administration has received Senate approval for 387 positions, as compared to 548 for Obama and 615 for George W. Bush at a comparable point in time.

Additionally, the administration hasn’t nominated anyone for another 217 posts that need Senate approval.

‘Despite historic obstruction from Democrats in Congress, the Presidential Personnel Office is filling the administration with the best and brightest appointees who share the president’s vision for the country,’ Shah told the Post.

He added that, ‘Staff work tirelessly and have experience consistent with the practice of previous administrations.’

White House officials told the Post that they believed the PPO was performing well, despite the fact that the office ‘is a much smaller PPO than at any time in recent history.’