Former President Donald Trump has taken aim at his successor Joe Biden while taking part in a golf tournament at the Saudi-backed LIV Invitational Pro-Am in Miami on Thursday.

The 45th President of the United States took to his Trump National Doral course alongside a host of professionals this morning, and had a few choice words for Biden while he was at it.

In a clip filmed by a WPBF 25 News reporter, Trump can be seen hitting his shot, before turning to the camera and saying: ‘Do you think Biden could do that? I don’t think so,’ drawing laughs from the onlooking crowd.

In a separate clip, he is asked ‘what he thinks of LIV’, the Saudi-backed breakaway golf tournament that has drawn huge controversy over the past few months.

Trump was later filmed by a reporter claiming he had gone round the first nine holes in one-over-par, an impressive score often not recorded by professional players, let alone 76-year-old former Presidents.

Donald Trump signs autographs for his supporters as he walks the course during the tournament, held at his own golf club 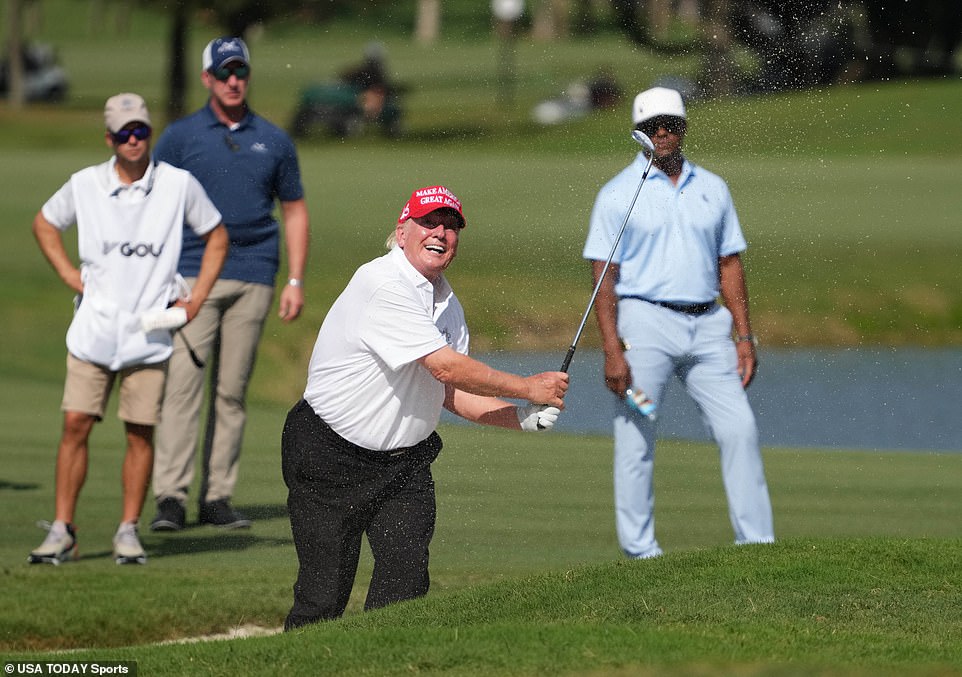 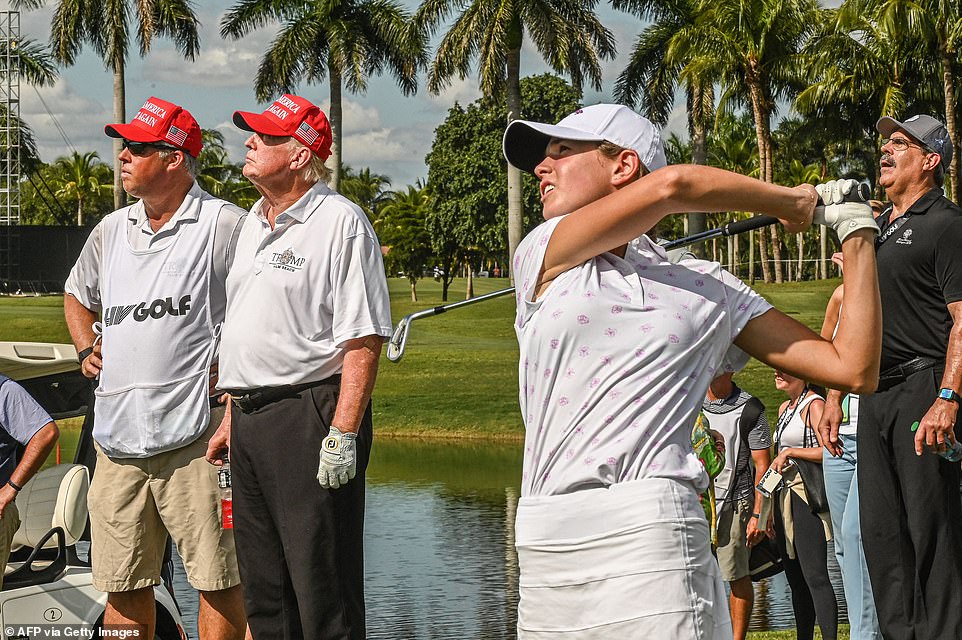 The former President watches his granddaughter, Kai Trump (center) play a shot during the Pro-Am tournament in Florida 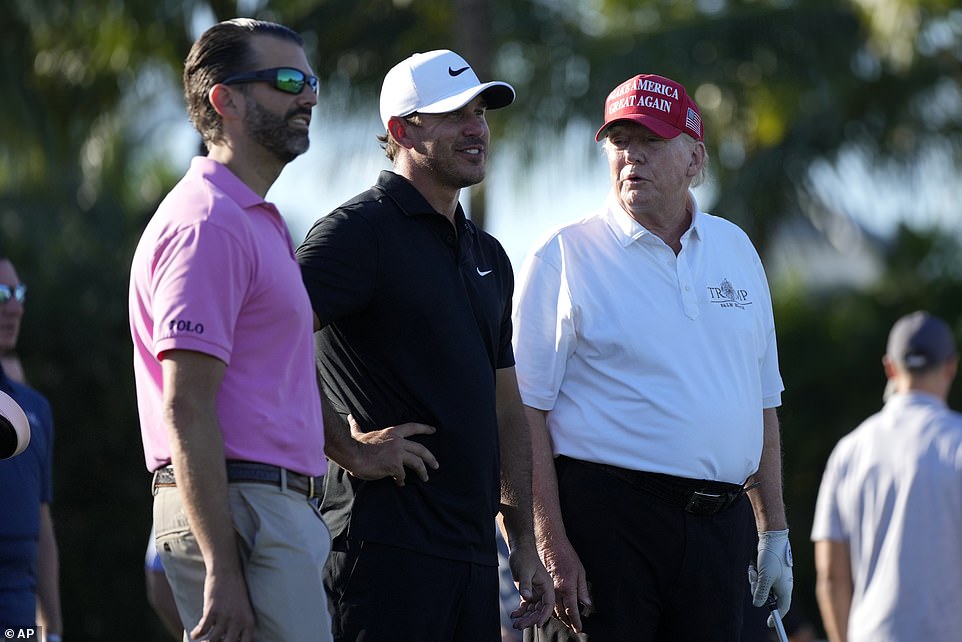 The former President (right) speaks to his son Donald Jr (left) and pro Brooks Koepka during the event, held ahead of the pros 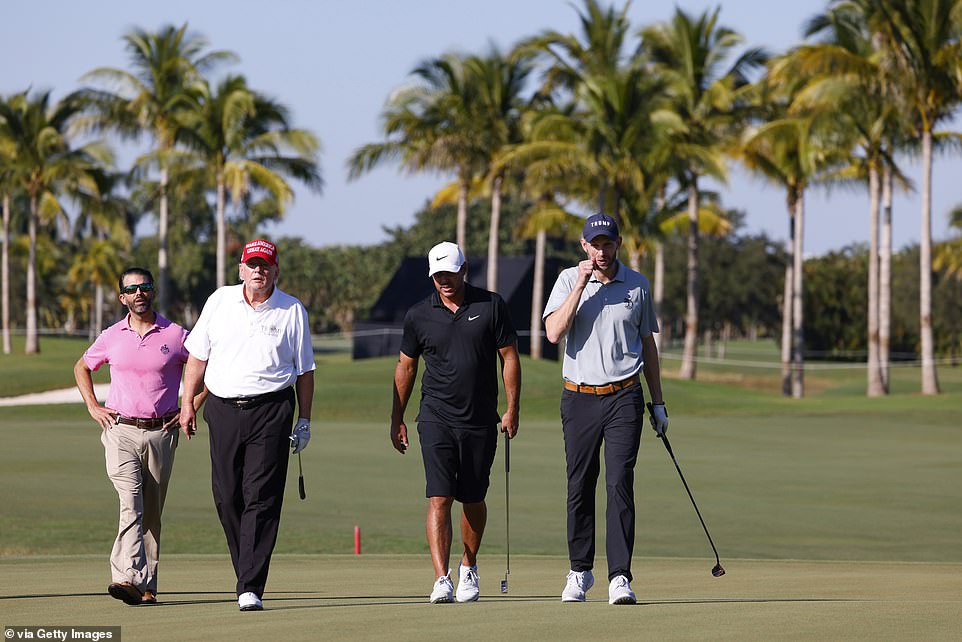 Trump walks onto the green at his Trump National Doral Miami course on Thursday morning, with his two sons and Koepka 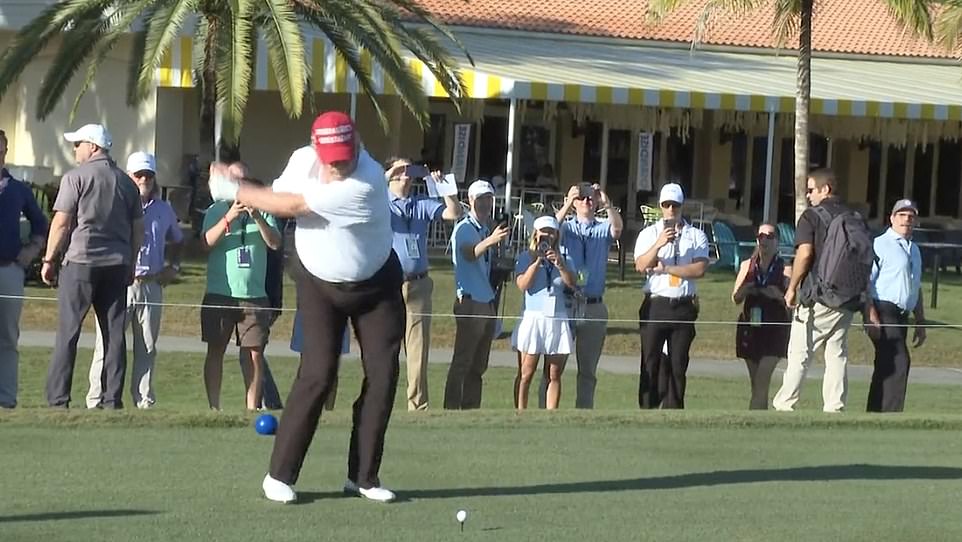 The former President played a shot, before turning to the camera and asking: ‘Could Biden do that? I don’t think so’ 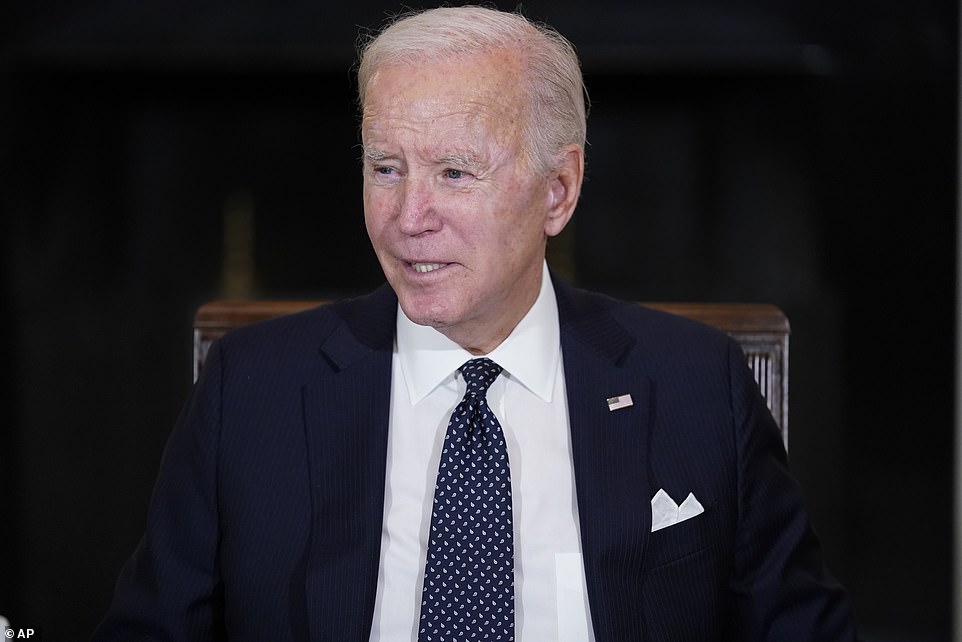 The Miami edition is the second LIV event to be hosted at a Trump course, after his Bedminster location welcomed the tour’s second ever US-held tournament in July.

Trump’s jibe at Biden comes amid a wave of criticism the current President has been fielding for a series of recent gaffes.

On Monday, he was the object of derision after needing a helping hand finding his way back to the White House after a tree-planting event on the South Lawn.

Footage posted to Twitter on Monday afternoon showed the president leaving the event honoring the White House groundskeeper, but he stops short and is heard asking his team, ‘where do we go?’

When a possible security staffer turns Biden around and points him in the right direction, he exclaims that he wanted to go the other way.

That awkward moment was just the latest of a series of incidents, some of which have called his health into question.

Last week, the president seemed to struggle getting off stage at a rally in Pittsburgh – just a month after a similar gaffe following a United Nations speech.

After finishing his speech, Biden was seen turning toward his right to exit the stage when he stopped to talk to his team, raising his hands in question. 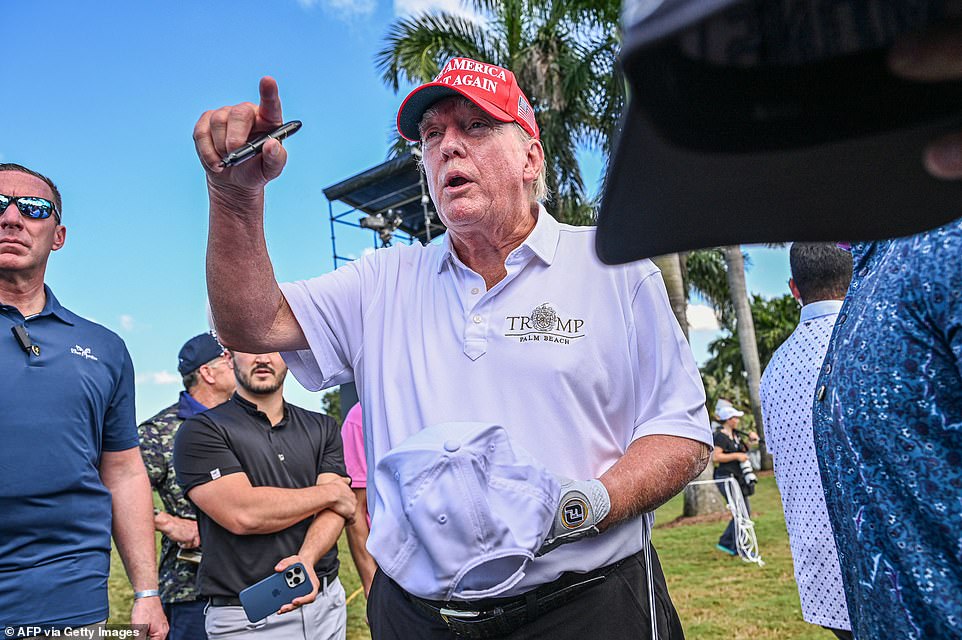 Trump was also asked by a fan what he thought of LIV Golf, and he replied: ‘Very good. It’s doing great… unlimited money.’ 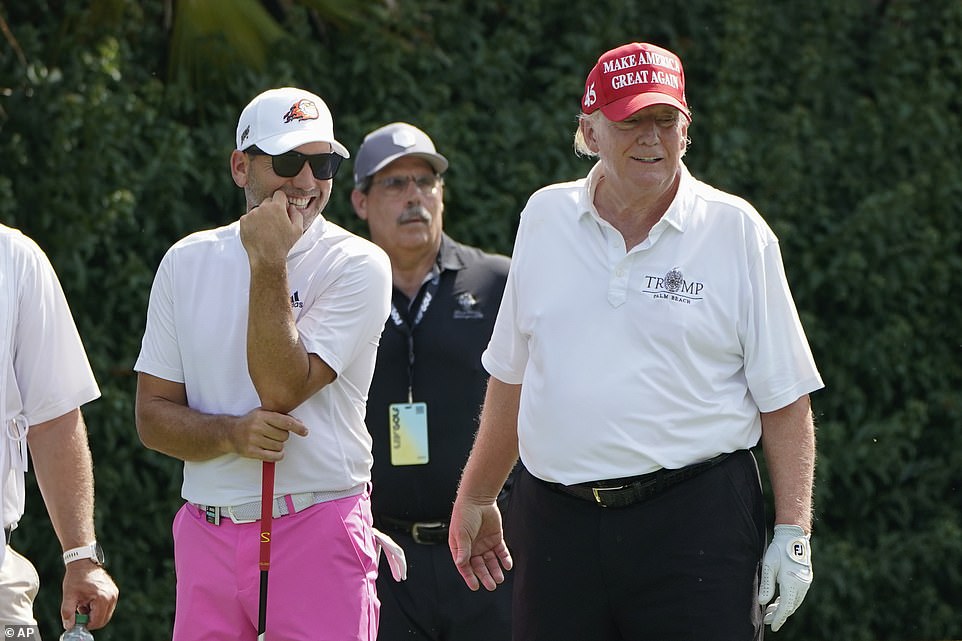 The former President, 76, joked with Sergio Garcia after teeing off on the 12th hole of his Trump National Doral course 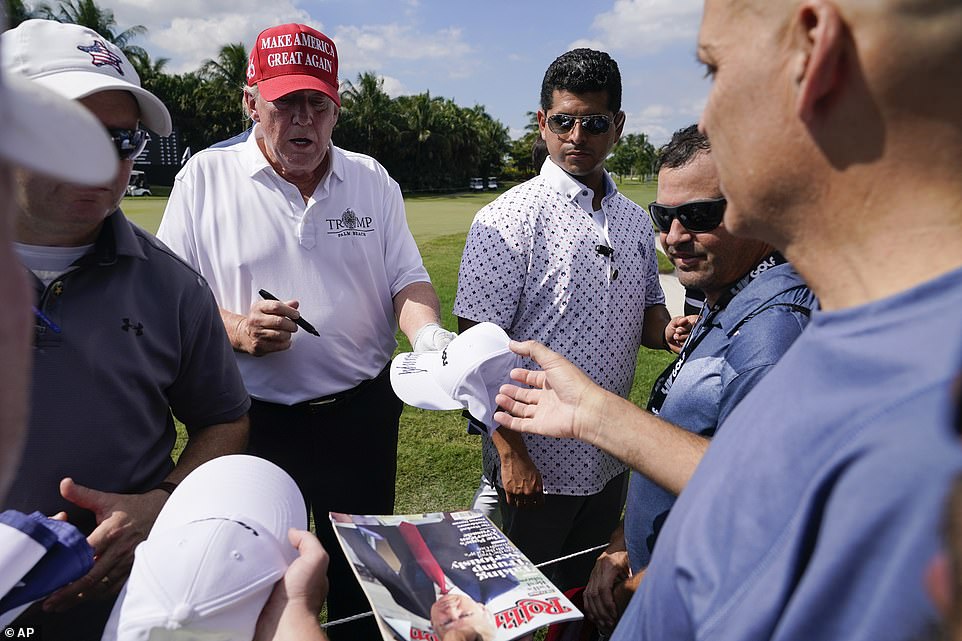 Supporters fawn over the President as he signs autographs while wearing a MAGA hat, on a day off from the campaign trail 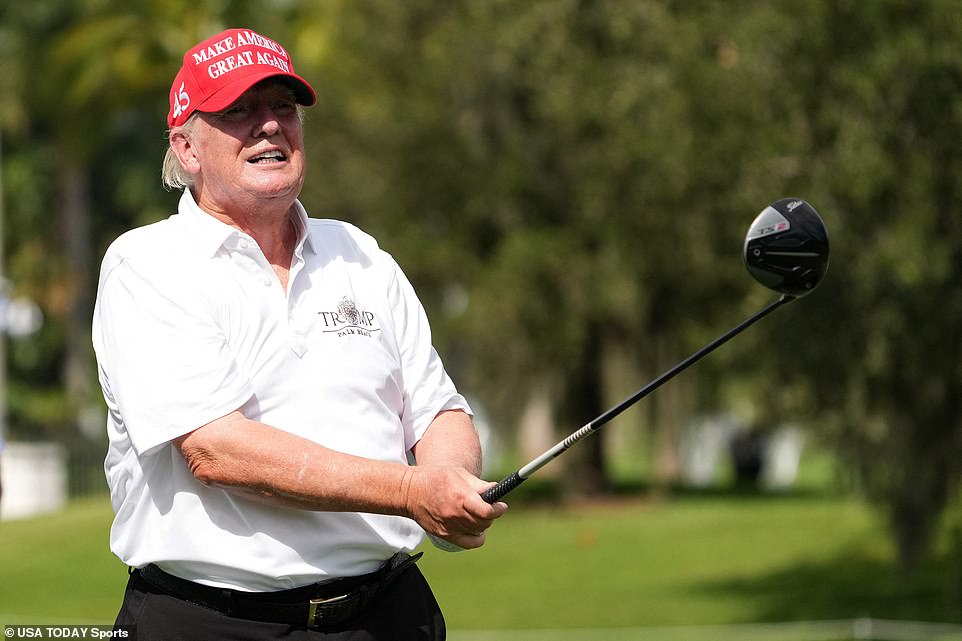 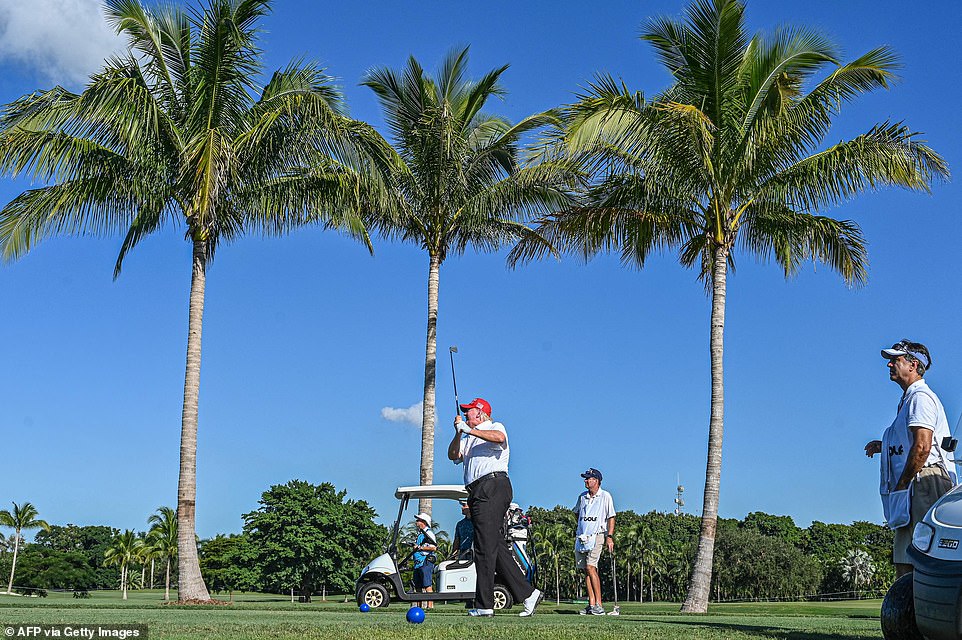 Trump plays a tee shot at his course, before stepping into the buggy awaiting him at the side of the tee box in Florida 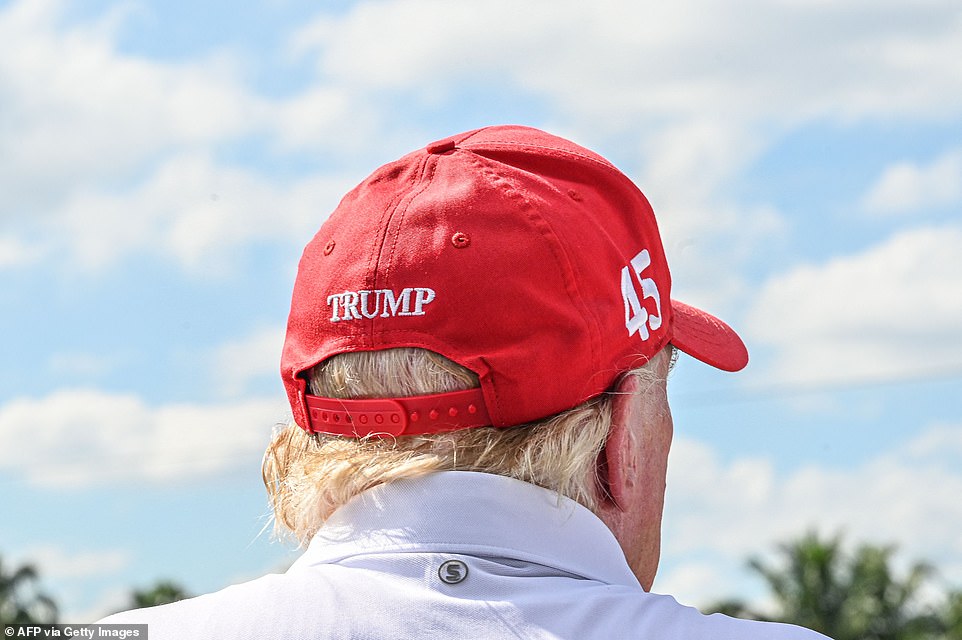 The Miami edition is the second LIV Golf event to be hosted at a Trump course, after his Bedminster location back in July

Shortly after, he spun around and exited the stage on his left side.

Prior to arriving to Pennsylvania, he made a rare stop to speak with reporters before departing – but instead of just answering questions, the president berated journalists asking about his campaign stops and abortion restrictions.

One reporter was called a ‘kid’ while the president told another to ‘educate’ themselves.

Despite the engagement with reporters outside of the White House, it is not uncommon for the president to need a little stage direction.

In late-September, Biden appeared to have a have similar stage mess up after giving an UN speech.

Trump, meanwhile, has been on the campaign trail himself in recent months and his appearance at LIV Golf Invitational in Miami comes in the middle of a flurry of appearances, with him soon to stump for the Republicans in Florida, Ohio and Iowa. 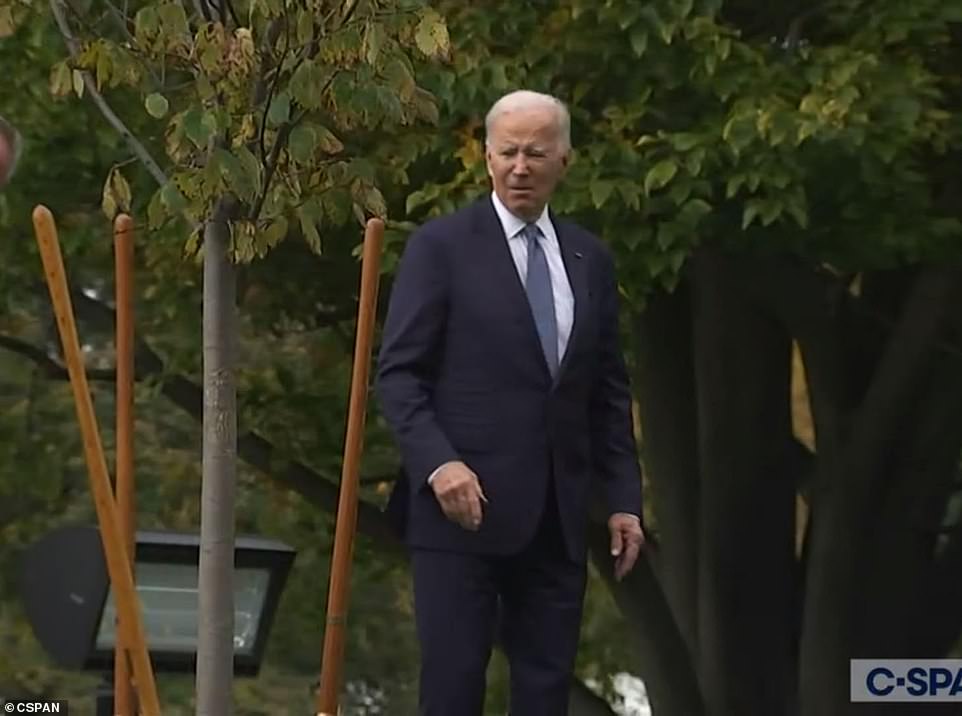 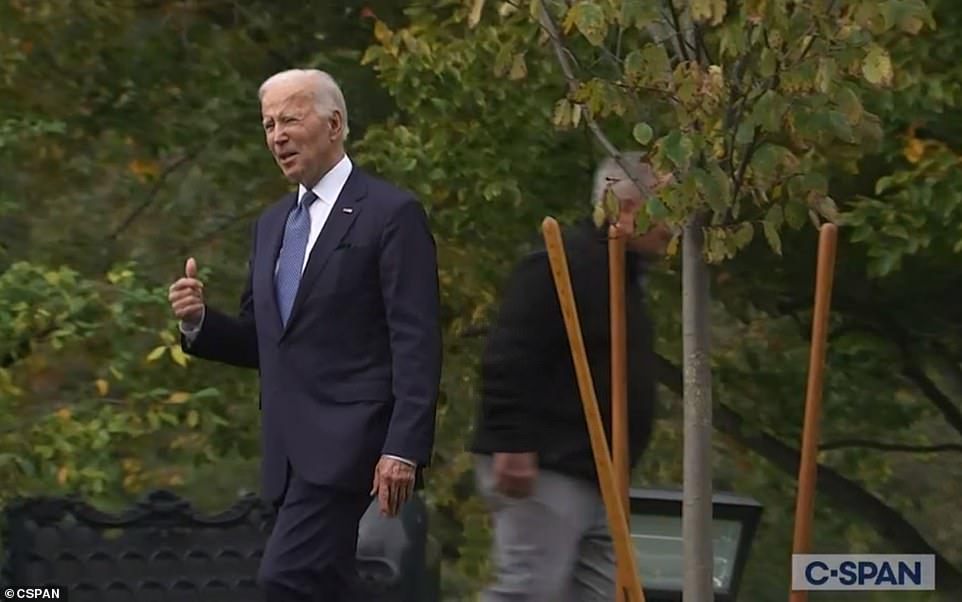 When the security turns Biden around and points him in the right direction, he exclaims that he wanted to go the other way 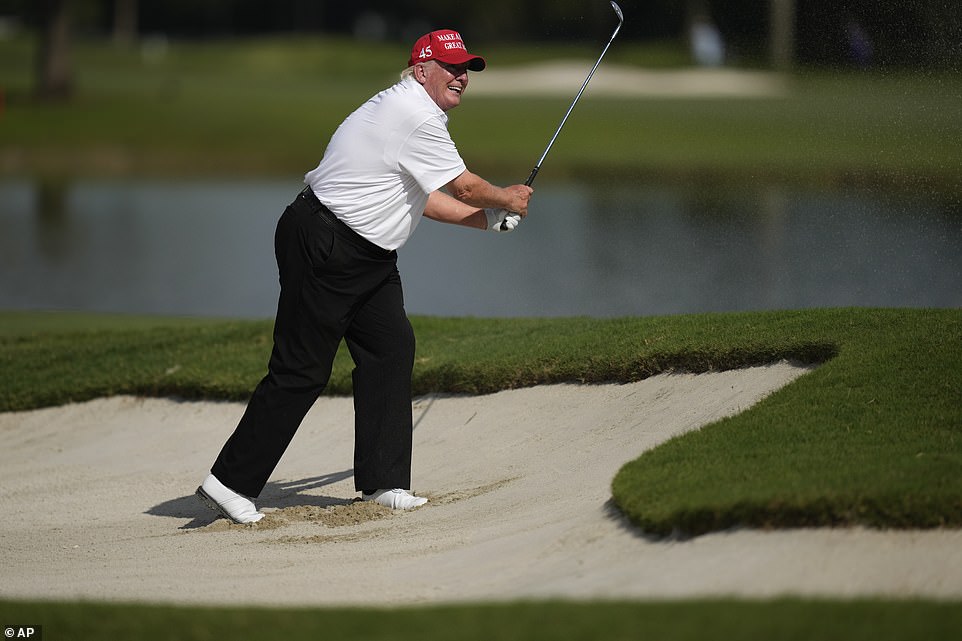 While the former President is known to be a good golfer, it appears he didn’t manage to keep out of all the bunkers 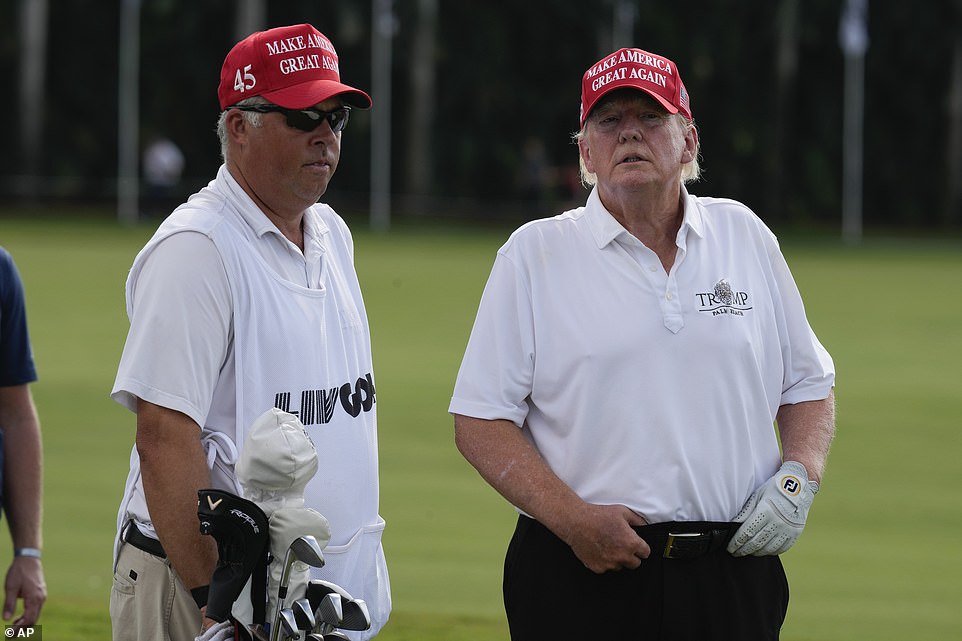 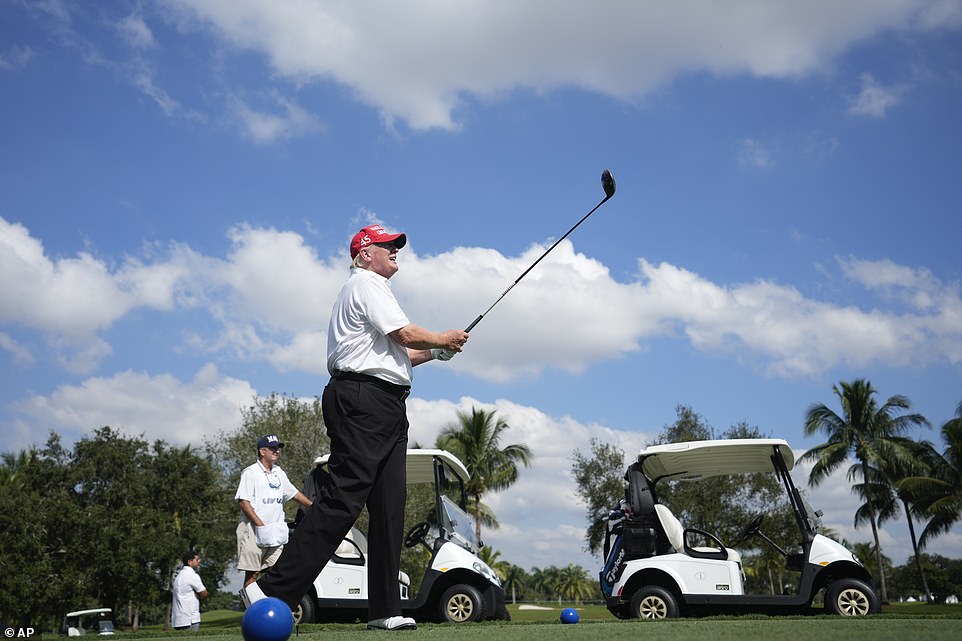 The former President is no stranger to playing in LIV’s Pro-Am tournaments, having done the same at his Bedminster course back in July.

There, he was joined by Caitlyn Jenner and Charles Barkley, where he played alongside various protests from families of 9/11 victims, aghast that a Saudi-funded tournament was being held in the shadow of New York.

In their protests, the families slammed LIV Golf and its ‘shameless defectors’, accusing the players of ‘accepting blood money from the Saudi Royal Family’.

In the weeks and months since, LIV Golf has played tournaments in Boston, Chicago, Bangkok and Jeddah, with Miami the season-ending event.

The tournament is being held on Trump’s iconic ‘Blue Monster’ course, with the likes of Phil Mickelson, Dustin Johnson, Cameron Smith and Koepka all in action. 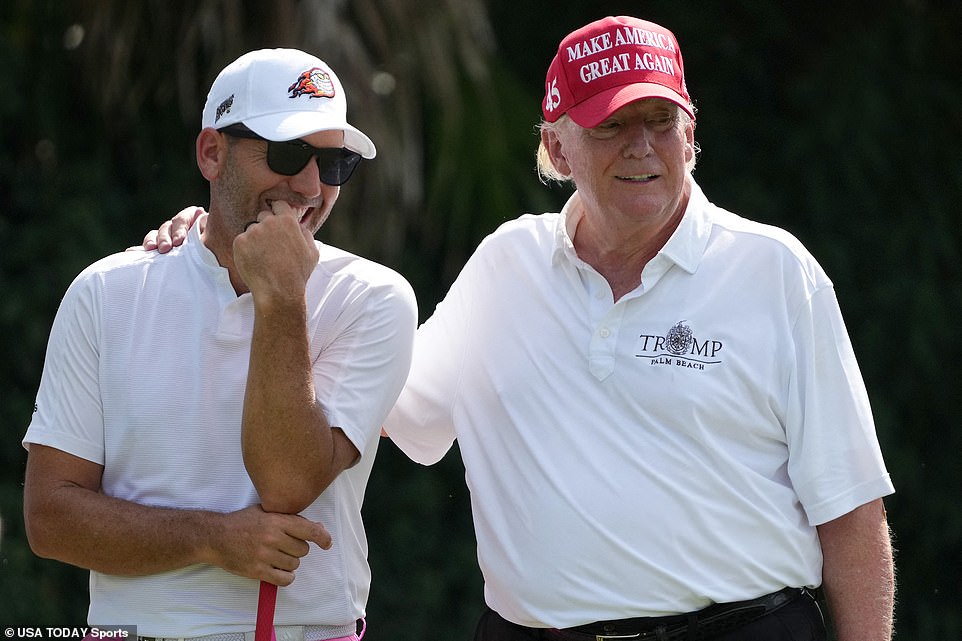 Garcia, one of the former PGA Tour stars who has since defected to the Saudi-backed LIV Series – shares a joke with Trump 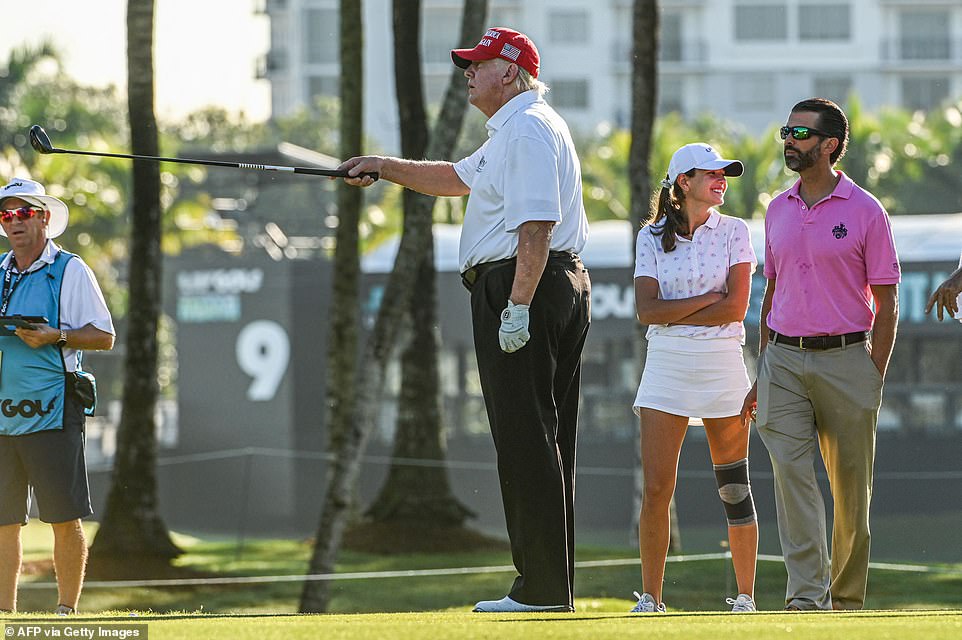 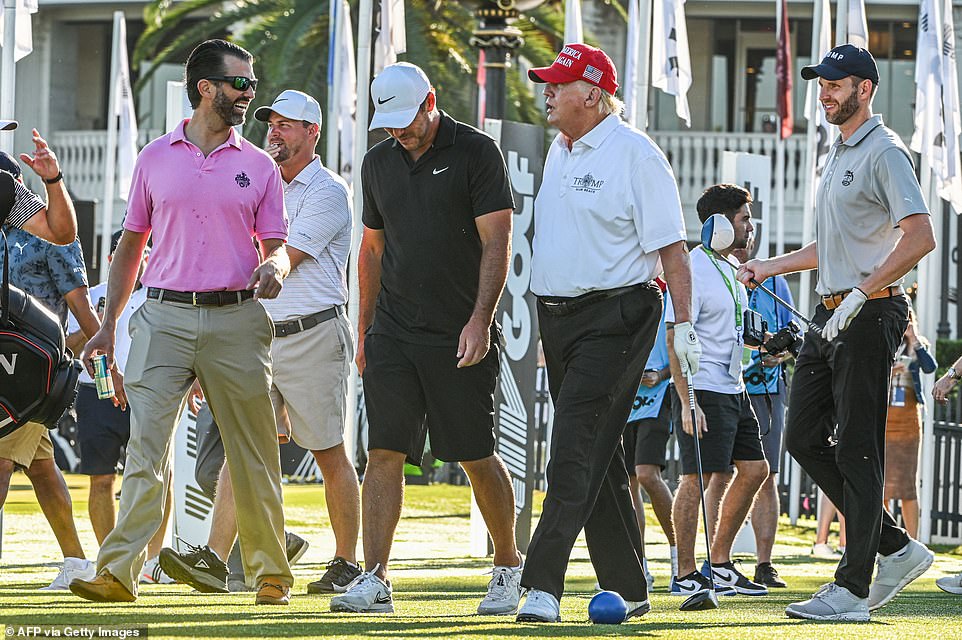 The former President jokes with his sons Donald Jr (left) and Eric (right), as well as golf pro Koepka during the competition