Donald Trump bashed China Wednesday morning for its ‘incompetence’ leading to worldwide deaths from the coronavirus pandemic – as the U.S. maintains the highest number of cases and deaths of any other country.

‘Some wacko in China just released a statement blaming everybody other than China for the Virus which has now killed hundreds of thousands of people,’ Trump tweeted, referencing an unidentified individual.

‘Please explain to this dope that it was the ‘incompetence of China’, and nothing else, that did this mass Worldwide killing!’ he continued.

Earlier on in the outbreak, Trump often referred to COVID-19 as the ‘Chinese virus,’ wanting to make it clear that he blames China for the outbreak.

The virus first appeared in December in the Chinese city of Wuhan, located in Central China’s Hubei province, and spread rapidly around the world.

Donald Trump bashed an unidentified Chinese individual on Wednesday for ‘blaming everybody other than China’ for coronavirus, claiming instead that China’s ‘incompetence’ is to blame for ‘mass worldwide killing’ 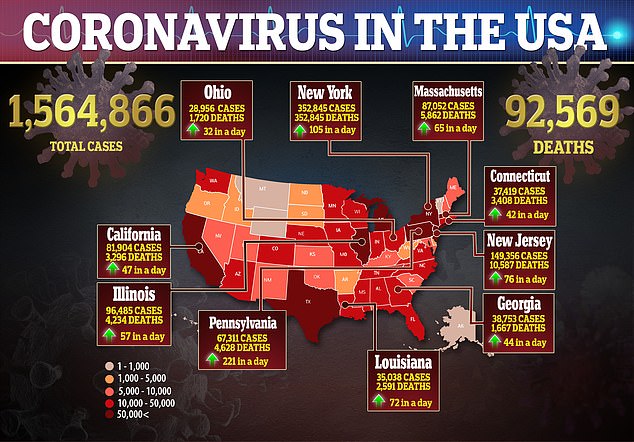 The U.S. still has the most number of cases and deaths from coronavirus, but Trump and his administration claim this is because other countries – like China – are not reporting their real numbers 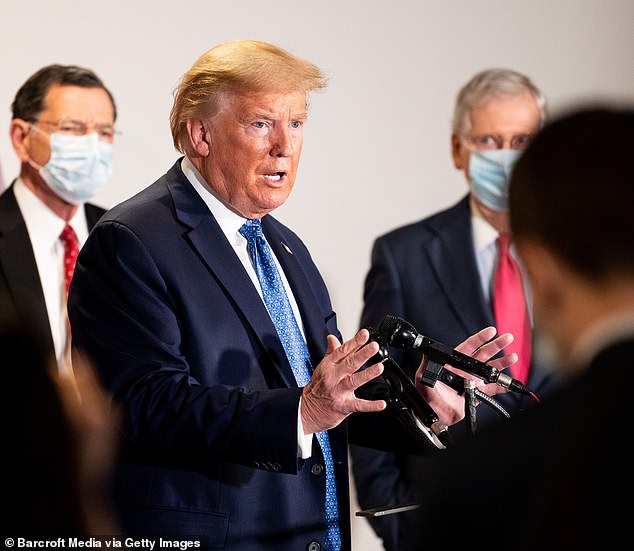 Trump has also said the U.S. accounted for around 30 per cent of the confirmed cases of coronavirus worldwide because of the higher levels of testing equipment and capabilities

So far the virus has killed more than 324,000 people worldwide and there are nearly 5 million confirmed cases – and the pandemic has triggered huge economic destruction.

The U.S. accounts for nearly 30 per cent of the confirmed cases with more than 1.53 million instances, but the president and experts have raised potential explanations, including that other countries, like China, are not accurately reporting the case count and death toll.

China has only reported around 84,000 cases and claims only about 4,600 people have died after contracting the virus.

These numbers were reported even though images were captured and revealed with massive amounts of urns at funeral homes in China.

Trump has also claimed that other countries have less cases because they do not have the same level of testing equipment and capabilities, meaning these countries have a less accurate way of making sure all those with symptoms are tested for coronavirus.

U.S. has reportted the highest numbers of cases and deaths than any other country

China says only 4,683 people have died there after contracting coronavirus

‘Don’t forget, we have more cases than anybody in the world. But why? Because we do more testing,’ Trump asserted during a speech last week at Owens and Minor, a medical supply distributor located in Allentown, Pennsylvania.

He also called testing ‘overrated,’ adding: ‘When you test, you have a case.’

‘When you test, you find something is wrong with people,’ Trump continued in his remarks. ‘If we didn’t do any testing, we would have very few cases.’

Trump has asserted on several occasions that China knew about the virus earlier on in the outbreak, but did not inform the rest of the world – leading to more deaths than the president says would have resulted if China released the information earlier.

He also threatened to end U.S. funding to the World Health Organization over his claim that it provided assistance to China in covering up the extent and seriousness of the outbreak.

The White House has also suggested that the novel virus originated in a laboratory in China and was accidentally released.

Trump tweet come the day after Hu Xijin, editor-in-chief of China Communist Party’s official publication Global Times, wrote in a now-deleted tweet that Trump governing by ‘witchcraft’ during the outbreak is to blame for the high level of deaths in the U.S. 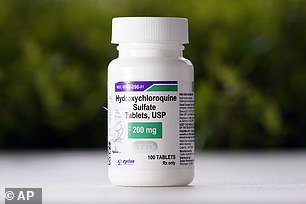 The president’s Wednesday morning attack against China also came after an individual close with China’s Communist Party lashed out at Trump on Tuesday.

He also blamed the U.S. response to the virus outbreak for accumulating the highest number of deaths.

‘President Trump is leading the US’s struggle against pandemic with witchcraft, and as a result, more than 90,000 people have died,’ Hu wrote Tuesday morning in a now-deleted tweet. ‘If it were in China, the White House would have been burned down by angry people.’

The editor of the governing publication is close with Chinese leadership.

Trump said Monday that he has been taking the unproven antimalarial drug hydroxychloroquine as a preventative measure for around two weeks.