President Trump told his Ohio rally crowd that COVID-19 ‘affects virtually nobody’ except for older Americans and those with preexisting conditions as the death toll approached 200,000.

Trump made the remarks on Monday night during a campaign rally in Toledo where a packed crowd donned ‘Make America Great Again’ paraphernalia.

‘Take your hats off to the young, because they have a hell of an immune system,’ Trump told the cheering crowd.

Trump (pictured): ‘In some states nobody young. They have a strong immune system – who knows. Take your hat off to the young because they have a hell of an immune system. It affects virtually no one’ 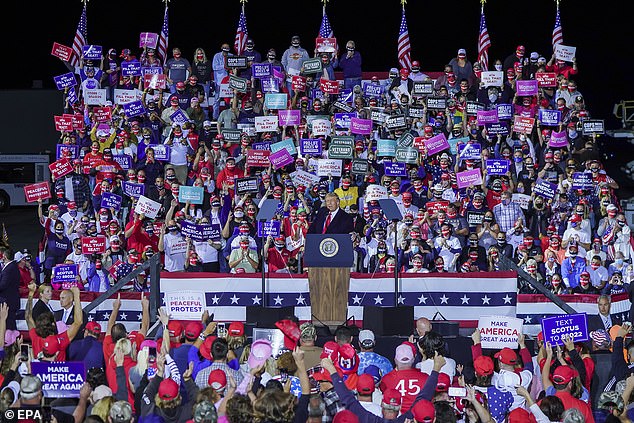 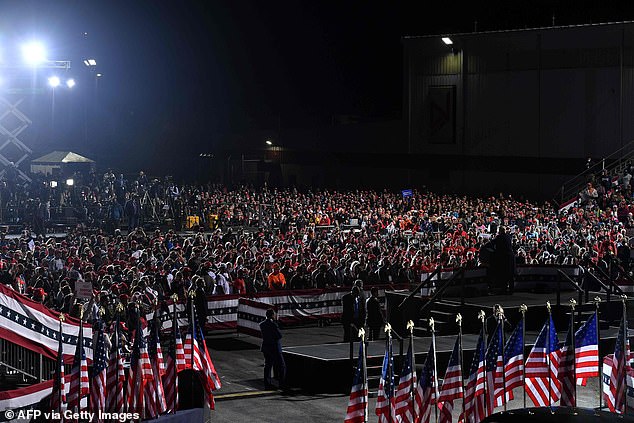 Before that, Trump said that the severity of COVID-19 does not affect younger Americans.

‘In some states nobody young. They have a strong immune system – who knows. Take your hat off to the young because they have a hell of an immune system. It affects virtually no one,’ he said, before adding ‘open your schools.’

While the CDC initially identified older Americans and those with preexisting conditions as most as risk, hundreds of children across the country have been infected so far.

The COVID-19 dashboard for Washington D.C. states that 276 children under the age of five have tested positive.

That number expanded to 490 positive results when considering schoolchildren between the ages of five and 14. That number if 40 cases higher than the local infection count for residents aged 15 to 19.

Fortunately, there have been no reported deaths for children 18-years-old and younger in Washington D.C. so far.

In New York City, its dashboard painted a similar picture of schoolchildren falling ill during the pandemic.

The CDC noted in an August report that ‘Children are at risk for severe COVID-19.’ 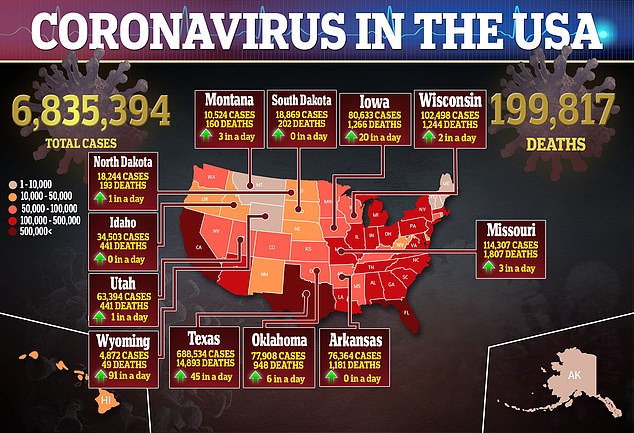 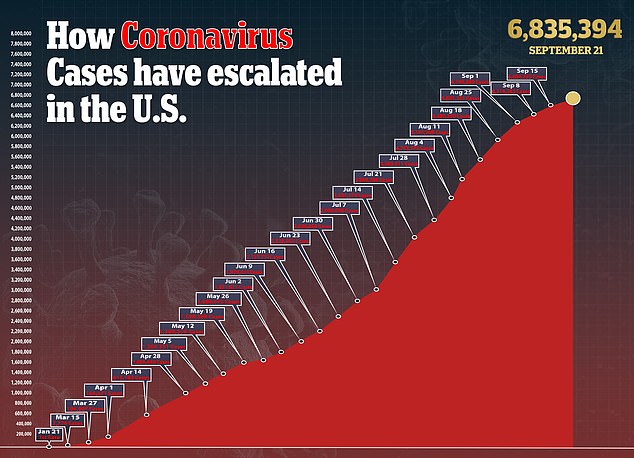 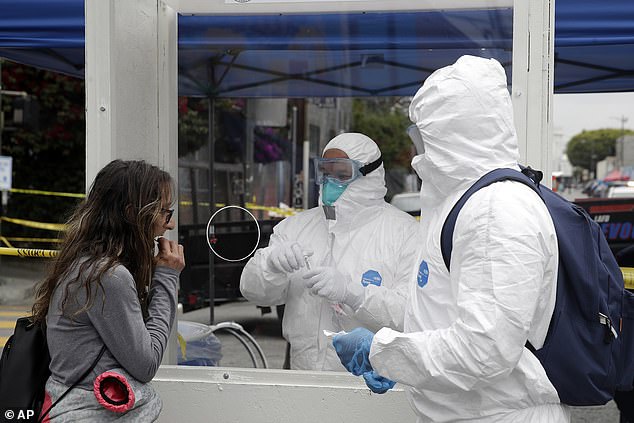 Pictured: members of the Los Angeles Fire Department wear protective equipment as they conduct a new coronavirus test on a woman (left) in the Skid Row district in Los Angeles.

The report reiterated that fatalities for children were low, but they were still being hospitalized and infected.

Trump’s statement also ignored the number of schoolchildren were became infected after schools reopened across the country. 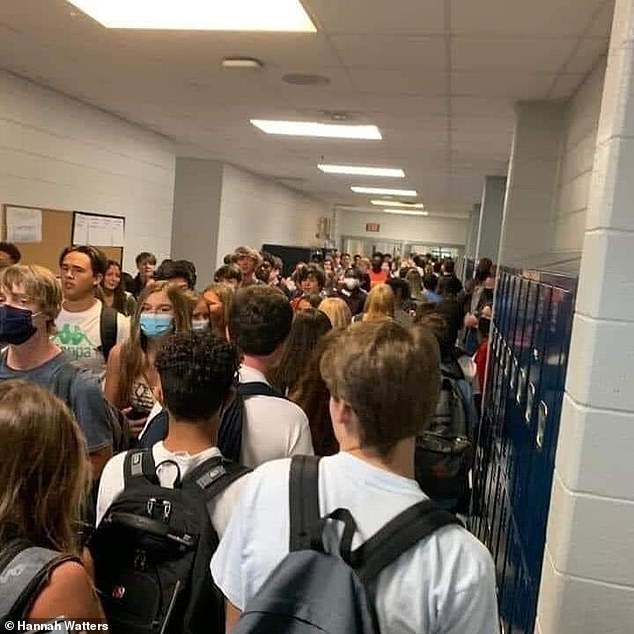 A photo taken days before the confirmed cases showed hallways packed with students, as well as a lack of face masks and social distancing.

Throughout the pandemic, Trump has been criticized for his administration’s response.

This month, he admitted to downplaying the virus over fears people would ‘panic’ early on in the pandemic. 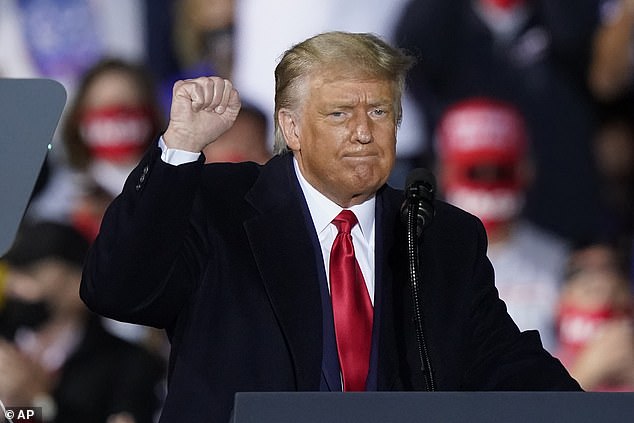 While Trump downplayed the pandemic, much of America watched as New York City’s morgues overflowed, hospitals became overrun, front line workers pleaded for PPE supplies on social media and one of the most buzzing cities went quiet.

And political leaders, including Mayor Eric Garcetti of Los Angeles, blasted him for leaving pandemic coordination up to individual states instead of mobilizing a federal response.

‘We’ve had to stand up testing centers on our own, we’ve had to do so much that is outside of our lane because of the lack of national leadership – but I also think some people are just exhausted.

‘They were sold a bill of goods, [the Trump administration] said it was under control, they said it would be over soon. And I think when leaders say that, people react and they do the wrong things.’

On the day of Trump’s campaign rally in Toledo, Biden lambasted his COVID-19 response and accused of him panicking during a separate campaign stop. 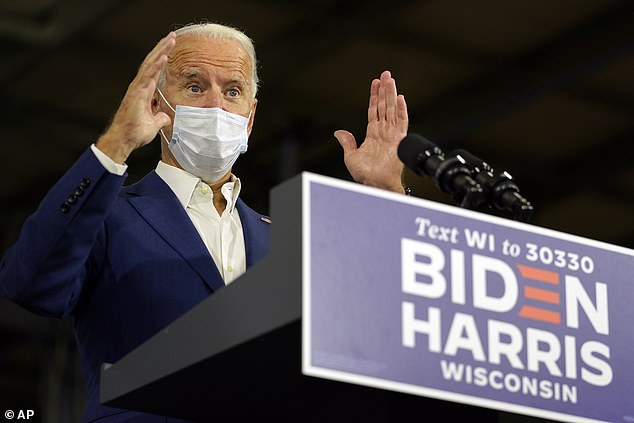 Joe Biden (pictured): ‘Due to Donald Trump’s lies and incompetence, the past six months have seen the one of the greatest losses of life in American history’

‘Due to Donald Trump’s lies and incompetence, the past six months have seen the one of the greatest losses of life in American history,’ he said during his remarks in Manitowoc, Wisconsin.

‘I want to spend just a few moments talking to those who voted for Donald Trump last time. I know many of you were frustrated. Angry. You believed you weren’t being seen or respected or heard. I get it. It has to change. And I promise you this: It will change with me. You will be seen and heard and respected by me,’ Biden said.

‘I’m going to fight as hard for those who supported me as those who did not support me,’ he said. ‘

‘This is not a partisan moment for god’s sake. This has to be an American moment.’