President Donald Trump told a crowd on Monday in Mississippi that he was favorably compared to rock legend Elvis Presley in his youth.

Trump, 72, was campaigning in the King of Rock and Roll’s hometown, Tupelo, when he brought his likeness to Presley up.

‘I shouldn’t say this, you’ll say I’m very conceited, cause I’m not,’ he said to tepid laughter. ‘But other than the blonde hair, when I was growing up, they said I look like Elvis.’

JUST CALL ME ELVIS: President Trump revealed on Monday at a rally in the legendary rocker’s hometown that he was compared to Elvis Presley when he was growing up 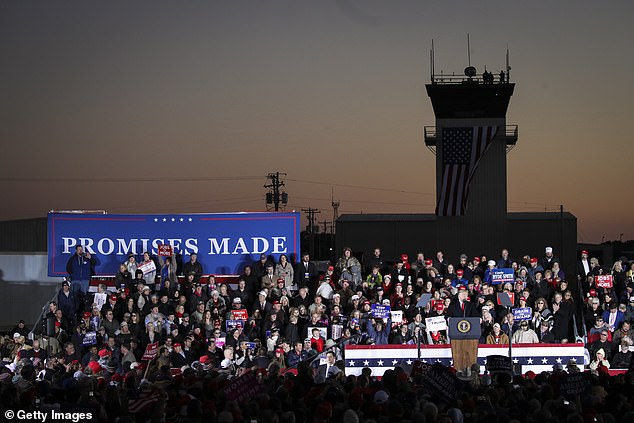 Trump, 72, was campaigning in the King of Rock and Roll’s hometown, Tupelo, when he brought his likeness to Presley up 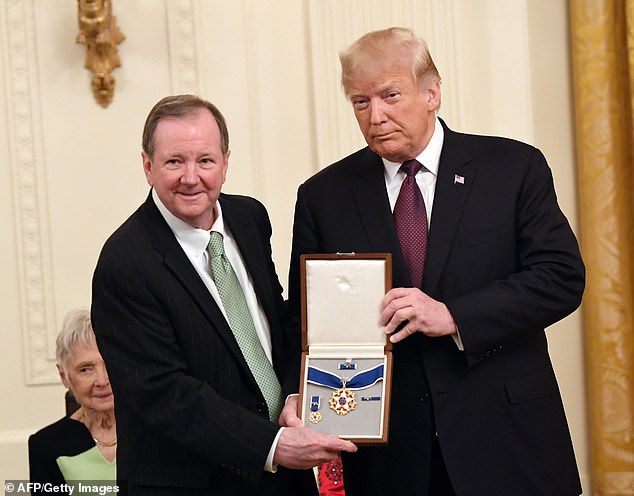 Trump awarded the Presidential Medal of Freedom to singer Presley posthumously this month at the White House. President and CEO of Elvis Presley Enterprises Jack Soden accepted the award on behalf or the King of Rock and Roll

He asked his supporters: ‘Do you see that, can you believe it? I always considered that a great compliment.’

Trump is delivering remarks at two rallies on Monday evening in support of Republican Sen. Cindy Hyde-Smith, who was forced into a run-off by her Democratic opponent on Election Day.

At the first, he brought up the town’s favorite son as he declared, ‘I am thrilled to be back in Tupelo. I love Tupelo. All the thousands of hard-working American patriots. And the proud birthplace of the King of Rock and roll, Elvis.

‘Elvis! We love Elvis,’ he said before bringing up the similarities he was said to share with the iconic performer. ‘We love Elvis, don’t we? In fact we just gave Elvis the Medal of Freedom at the White House,’ he pointed out.

In mid-November, the president honored Presley posthumously with the highest-ranking award that can be bestowed upon a civilian during his first-ever ceremony at the White House of its kind.

He reminisced in the East Room event that ‘crowds were enraptured by Elvis’s ‘electric performances and unbreakable bond with his fans’ during his lifetime.

‘In fact, at the end of a performance, oftentimes the fans would go so wild — I was there once in Las Vegas, at the Hilton. The fans were ripping the place apart, screaming. They were going crazy. And they announced, “Elvis has left the house. Elvis…”

He said to laughter, ‘If they didn’t say that, I think I’d still be there. Maybe I wouldn’t be here. ‘But they had to do that. “Elvis has gone. Elvis has left.’

Accepting the award on Presley’s behalf at the event President and CEO of Elvis Presley Enterprises Jack Soden.

Trump did not make the comparison between himself and the actor and singer who passed away at Graceland in 1977 during the ceremony at the White House.