Donald Trump is threatening to sue the Pulitzer Prize board if it doesn’t strip the New York Times and Washington Post of the 2018 National Reporting prize the news outlets jointly won for their investigation of Russia’s influence on the 2016 election.

‘It is hereby demanded that the Pulitzer Prize Board take immediate steps to strip the New York Times and The Washington Post of the 2018 Pulitzer Prize for National Reporting. Pulitzer Prize Board’s failure to do so will result in prompt legal action being taken against it. Please be guided accordingly,’ wrote Trump attorney Alina Habba in a letter to Bud Kliment, the interim administrator of the awards.

The former president, who has furiously denied he won in 2016 with any help from Moscow, cited a federal indictment that alleged that Russian-born analyst Igor Danchenko, a key source for infamous and unsubstantiated Christopher Steele dossier, fabricated conversations with one source and used a Democratic political operative as another.

Danchenko pleaded not guilty to five felony charges of lying to the FBI last week. His arrest came about from Special Counsel John Durham, who is investigating the origins of the FBI’s Crossfire Hurricane probe into claims that Trump conspired with Russia during the 2016 election.

In the aftermath the Washington Post corrected two articles that contained references to the Steele Dossier – but neither of those articles were part of the citation that won the newspaper its Pulitzer.

Trump cited that correction in his complaint to the Pulitzer Board.

‘Even one of the recipients of the award, The Washington Post, has acknowledged the unsubstantiated nature of its reporting as it relates to these events. Specifically, on November 12, 2021, The Post retracted statements from several articles relating to the Steele Dossier and the alleged Russia-Trump connection and its executive editor proclaimed that ‘The Post could no longer stand by the accuracy of those elements of the story,” his attorney’s letter to noted.

Trump lawyer complained the articles ‘were based on incontrovertibly false information provided by dubious sources who were maliciously attempting to mislead the public and tarnish our client’s reputation.’

In 2018, ten reporters from the New York Times and the Washington Post jointly won the Pulitzer for National Reporting for their ‘deeply sourced, relentlessly reported coverage in the public interest that dramatically furthered the nation’s understanding of Russian interference in the 2016 presidential election and its connections to the Trump campaign, the President-elect’s transition team and his eventual administration,’ according to the committee.

But in the list of articles the Pultizer committee cites as the reason for the prize, there is little on the Steele dossier. The prize-winning articles included stories on the actions of former Trump campaign aide George Papadopoulos, Donald Trump Jr.’s meeting with Russian officials, Russia’s actions on social media, and Michael Flynn’s communications with the Russian ambassador to the United States.

One New York Times story on Papadopoulos mentions the dossier but doesn’t detail its allegations.  And a Washington Post article examined how the FBI paid Christopher Steele to continue his investigation into Russian actions. 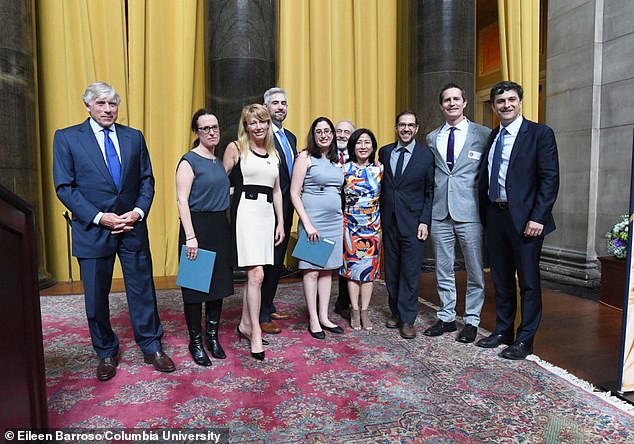 In 2018, ten reporters from the New York Times and the Washington Post jointly won the Pulitzer for National Reporting for their ‘deeply sourced, relentlessly reported coverage’ on Russia’s influence in 2016 – the reporters are seen above 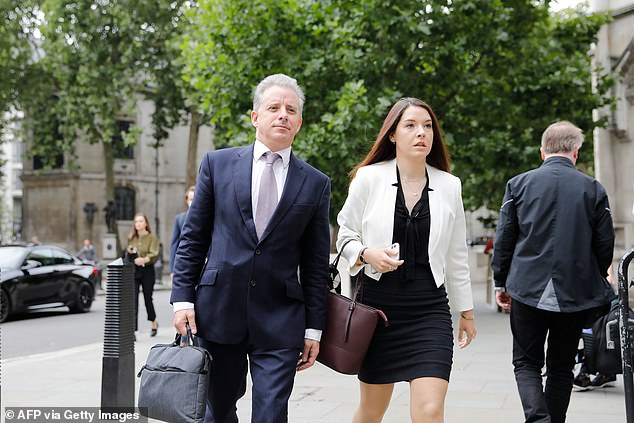 Christopher Steele’s controversial dossier was filled with unproven allegations, including a claim that the Russians had blackmail material on Trump, which Trump denied; above Steele and his lawyer arrive at a London courthouse in July 2020

The Steele dossier played a central role in the FBI obtaining FISA warrants on then Trump campaign aide Carter Page, who was the center of an investigation into whether Trump’s campaign worked with the Russians. The dossier was read by many news outlets and was the foundation for several Trump conspiracy theories.

Trump had called for the Pulitzers to be rescinded before, including last month.

Enteries for a Pultizer prize are judged by 77 editors, publishers, writers, and educators, according to the board.  Members of the Pulitzer Prize Board and journalism jurors receive no compensation.

Awards are made by majority vote by the board based on the jurors’ recommendations.

Prizes have been rescinded in the past. Most famously, in 1981, the Pulitzer Prize Committee withdrew its feature-writing prize from Washington Post reporter Janet Cooke after she admitted that her award-winning story about an alleged 8-year-old heroin addict in the District of Columbia was fabricated.

In his March 2019 report, special counsel Robert Mueller found no evidence that the  Trump campaign ‘coordinated or conspired with the Russian government in its election-interference activities.’

But it did find that Russia interfered in the 2016 contest ‘in sweeping and systematic fashion’ that ultimately benefited Trump.

Trump praised Durham for his work and claimed last week it’ll ‘only get deeper’ from here. 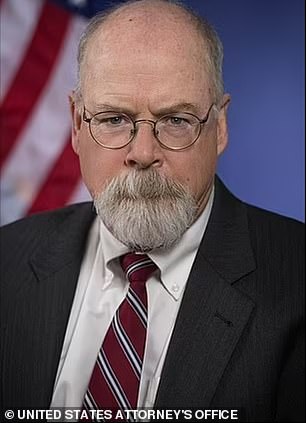 Christopher Steele’s dossier was controversial from the start with its unproven allegation the Russians had blackmail material on Trump – including an alleged ‘golden showers’ incident. Trump vehemently denied the allegation.

Danchenko, 43, was the primary researcher for Steele’s dossier alleging that Trump’s 2016 presidential campaign conspired with Russia in a covert operation to beat Hillary Clinton, and that Russia had salacious videos that could be used to blackmail Trump.

He was charged with lying to the FBI, which he has denied.

Michael Sussman, a cybersecurity lawyer who worked for Hillary Clinton’s presidential campaign, was charged in September and pleaded not guilty to lying to the FBI.

Sussman was indicted for allegedly telling the FBI in September 2016 that he was not doing work ‘for any client’ when he requested a meeting with the FBI’s general counsel to warn them of concerns from cybersecurity researchers of potentially suspicious contact between Russia and the Trump team.

At the meeting the attorney allegedly gave the FBI data and analytics from cybersecurity researchers who thought the numbers might be evidence of hush-hush communications between Trump Organization’s computer servers and Alfa Bank – a Kremlin-linked Russian financial institution. The FBI looked into the matter but found no connections.

Following the revelation of the arrests, the Washington Post took the unusual step of substantially editing and publicly correcting several of its prior stories about the dossier.

Two online articles published by the newspaper in March 2017 and February 2019 were heavily edited, and an editor’s note was attached to them explaining that certain claims in the reports were  ‘contradicted by allegations in a federal indictment and undermined by further reporting.’ 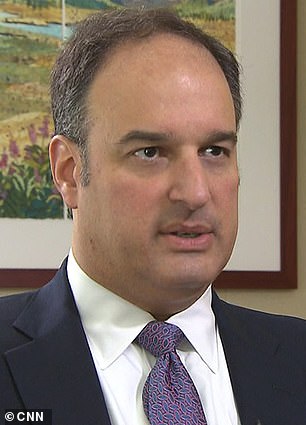 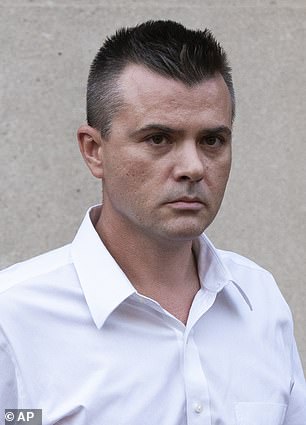 Both articles had alleged that Belarusian American businessman Sergei Millian was a key source of the Steele dossier.

However, the new indictment alleged that Danchenko had lied when he claimed that he’d spoken to Millian when gathering information that was included in the dossier.

‘As a result, portions of the story and an accompanying video have been removed and the headline has been changed,’ one of the Washington Post editor’s notes stated.

Though policies differ among different media outlets, it is unusual to substantially edit and republish an online article when new information comes to light. 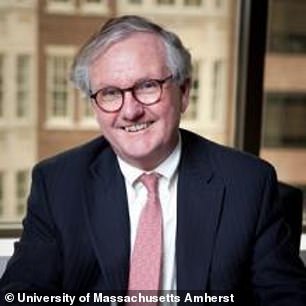 Charles H. Dolan Jr, also known as Chuck, was revealed as a source for Danchenko

Many outlets simply publish a new article containing the further information, possibly adding an editor’s note to the outdated article.

The original Post articles had alleged that Millian was the dossier’s ‘Source D’, the source who claimed Russian intelligence had videos of Trump engaged in deviant behavior in a Moscow hotel room.

The new indictment strongly suggests, but does not directly allege, that the source for that salacious claim was actually an American public relations executive, whose identity has been confirmed by his attorney as Charles Dolan.

Dolan was a state chairman for both of Bill Clinton’s successful presidential campaigns in 1992 and 1996, and an advisor to Hillary Clinton’s 2008 campaign.

He also previously worked as executive director of the Democratic Governors’ Association, and actively campaigned for Hillary Clinton in 2016, according to the indictment.

Former Attorney General Bill Barr had tapped Durham, then a US attorney in Connecticut, to look into the FBI’s Crossfire Hurricane probe from when it began in July 2016 until Special Counsel Robert Mueller was appointed to take it over in May 2017.