President Donald Trump will shove a round of golf with Japanese Prime Minister Shinzō Abe into a jam-packed schedule next week while he’s in Tokyo.

The White House confirmed today that Trump would play a ’round of afternoon golf’ with Abe on the first day of his brief visit.

A state call with the imperial family is also on the books, as well as a meet and greet with American and Japanese servicemembers stationed at Yokota Air Force Base.

After a day of talks with Abe on the second day of his stay, Trump will join Abe at a meeting with ‘families of Japanese citizens abducted by the North Korean regime,’ a senior administration official said Tuesday.

For the finale, Trump and the U.S. delegation will attend an Abe-hosted banquet.

President Donald Trump (right) and Japanese Prime Minister Shinzō Abe (left) will play a round of golf in Japan on Nov. 5

Tokyo is Trump’s first overseas stop on a 12-day race around the region. The U.S. president leaves Washington on Friday and arrives in Tokyo on Sunday after a day spent in Hawaii in between.

A senior U.S. told reporters on Tuesday during a background briefing that Trump’s trip ‘will reaffirm the U.S.-Japan alliance as a cornerstone for regional peace and security.’

‘The President’s meetings in Japan will focus on ways for the U.S. and Japan to work together to promote a free and open Indo-Pacific region,’ the official said.

As part of his diplomatic outreach, Trump will golf with Abe again. The two leaders played previously at the U.S president’s Florida property in February.

Japan’s foreign ministry had previously confirmed that Abe and Trump would golf on Nov. 5.

Japanese golfer Hideki Matsuyama, the world No. 3-ranked pro, will join the two leaders on the links. 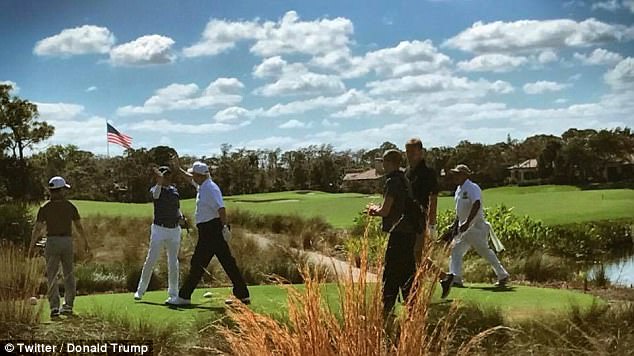 ‘Having a great time hosting Prime Minister Shinzo Abe in the United States!’ Trump tweeted in February, the last time he played golf with Abe (in Florida)

A senior White House official played coy last Monday morning about the idea of Trump carving out four hours for fun on a trip that will see him and his aides travel more than 21,000 miles.

But the official admitted Trump and Abe are ‘both golf fanatics’ and said, ‘I wouldn’t be surprised if they find an opportunity to play. … He’s definitely open to it.’

Asked if the president is packing his golf clubs for the trip, the official joked that seeing them ‘would be the indicator, I think, that someone – probably me – will be carrying his golf bag onto the airplane.’

At a briefing on the trip this Tuesday at the White House, an official included the golf game in an official schedule of Trump’s activities.

Trump and Abe played a round of golf in Florida and met at Trump’s private Mar-a-Lago resort club in February.

Abe gave Trump a $3,755 gold golf driver when the Republican politician won the presidency, and Trump was seen making use of it during their match in Palm Beach. 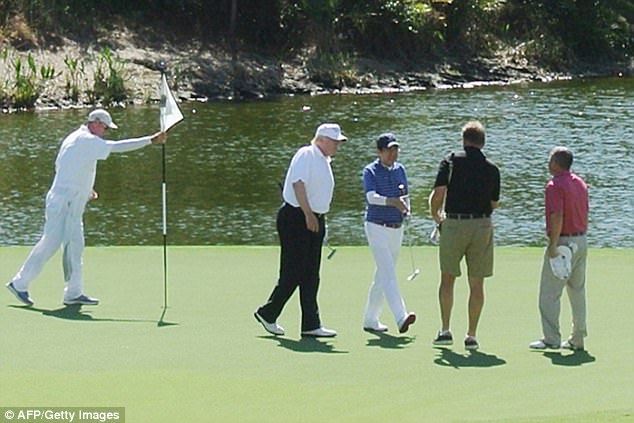 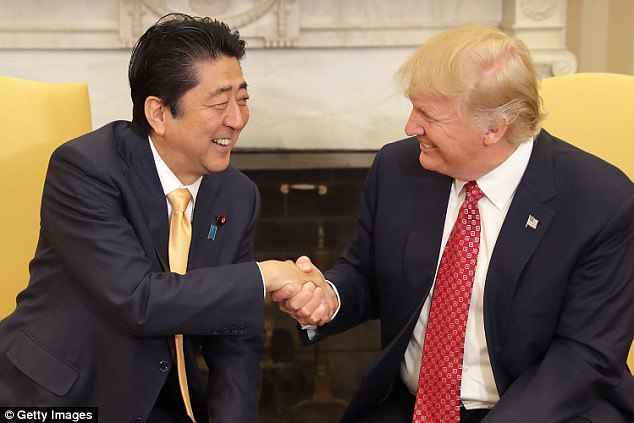 Trump and Abe hit it off and became fast allies during an Oval Office meeting on February 10, shortly after Trump took office 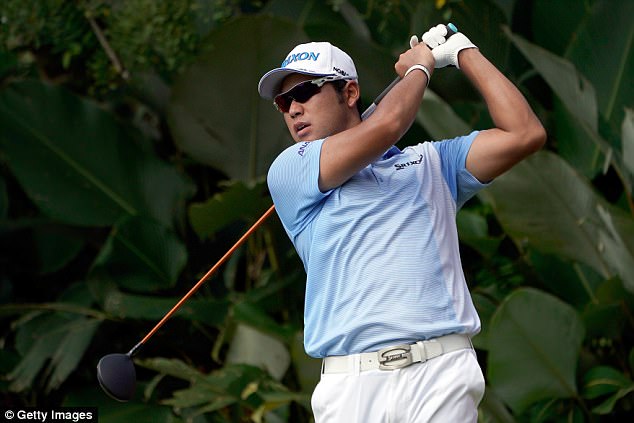 KUALA LUMPUR, MALAYSIA – OCTOBER 15: Hideki Matsuyama of Japan, the No. 3 ranked pro golfer in the world, will join Trump and Abe on the links next month

During his first year in office, Barack Obama, the most recent U.S. president, also visited Japan. His introduction to the royal family generated  mass outrage from his critics after he bowed to Emperor Akihito and Empress Michiko.

Democrat Bill Clinton also came under fire when he greeted the Japanese emperor with a semi-bow at the White House during his presidency.

How Trump plays the greeting will be closely watched in the U.S.

So will the banquet he’s attending at Abe’s invitation. When former Republican President George H.W. Bush was on his 12-day trip to Asia in 1992, he vomited on the then-Japanese PM in the head of government’s home.

After his visit to Japan, Trump will travel to South Korea, China, Vietnam and the Philippines, tying Bush in trip duration.

He’s addressing South Korea’s National Assembly during his stay in Seoul, an official said Tuesday. He will not visit the Korean peninsula’s Demilitarized Zone (DMZ), the official confirmed.

Trump is also on track to meet one-on-one with Philippine strongman Rodrigo Duterte during the trip’s final leg in Manila.

An official on Tuesday described ‘a warm rapport there’ based on the leaders exchanges over the phone and in letters.

‘He’s very much looking forward to his first in-person meeting with President Duterte,’ the official said.