Donald Trump will unveil his immigration overhaul Thursday, providing a road map for weary lawmakers who have tired of proposing plans only to find out the president won’t sign them.

Jared Kushner, a senior White House official and the president’s son-in-law, crafted the current proposal with the input of economic and border security experts such as senior policy advisor Stephen Miller.

Officials stressed at a briefing for press that it is the ‘Trump’ plan and not the ‘Kushner proposal,’ the ‘Miller proposal’ or even ‘The Republican Proposal’ – even though a slide in the White House’s presentation promoted it that way.

‘Right now, this is the Trump plan. We’re hoping this will become the Republican plan,’ one of the officials told DailyMail.com on Wednesday.

Whether Trump will be able to get a majority of lawmakers on board was an unknown as the White House made its second attempt at comprehensive immigration reform after a skirmish with the Democratically-controlled House of Representatives earlier in the year.

Trump met with Republican senators last week, and sent his proxies to Capitol Hill on Tuesday.

A report after the GOP luncheon claimed that Trump’s plan was lacking in details and Kushner had trouble handling the information.

An official disputed the claims on Wednesday, claiming senators’ reaction had been ‘misreported’ and telling DailyMail.com, ‘People were very, very enthusiastic about it.’

White House officials have briefed half of the Senate’s 53 Republican members on the president’s plan, the Trump adviser claimed. ‘And there’s been no negative comments on the record.’

A slide in the presentation said that within the current system, just 12 percent of immigrants are coming because of employment and skill, while 66 percent are relocating because of family ties. Another 22 percent are allowed in for humanitarian causes and through the diversity visa lottery.

Trump’s plan, which the slide mistakenly referred to as ‘The Republican Proposal’ even though officials said that wasn’t the case, set up new categories of 57 percent employment and skill based, and a reduction to 33 percent for family links and 10 percent for humanitarian purposes.

The administration based its plan on systems in Australia, Japan and Canada. 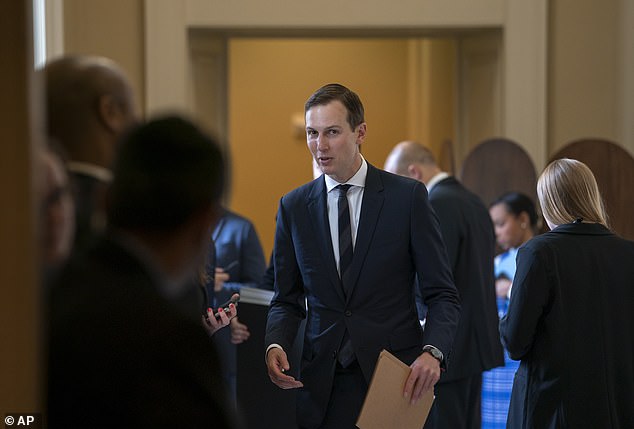 Jared Kushner, a senior White House official and the president’s son-in-law, crafted the current proposal with the input of economic and border security experts such as senior policy advisor Stephen Miller

Australia’s point-based system prioritizes merit-based workers at 68 percent of its total with 30 percent relocating for family reasons and 2 percent coming for other reasons.

Trump would totally do away with the diversity visa lottery in America, which he incorrectly claimed on Wednesday involves countries picking its worst citizens and sending them to America.

Non-Americans apply for visas and are selected by the State Department at random through the system. If they pass background checks administered by the United States, they are allowed to come to America.

Last week a senior White House official told DailyMail.com that Trump envisions a ‘big door’ that immigrants with skill sets the U.S. wants will be able to walk through, ant that’s the focus of his overhaul.

Under such a system it wouldn’t be necessary for Trump to send illegal immigrants to sanctuary cities, the person, touching on an interim proposal the president claims he’s developing.

‘I think that if this plan gets enacted, then the amount of illegal immigrants coming into this country should plummet,’ the senior official told DailyMail.com, ‘because you’ll have the secure border and you’ll have the ability to detain, adjudicate – with due process – and then remove people who coming in illegally.’

The person added, ‘And then we’ll have a big door, which is the people who are coming in legally will be able to come in in a much simpler, expedited fashion, and that’s what we, I think, should expect, and aim for as a country.’

President Trump threatened on Tuesday morning to resort to ‘harsh measures’ to address problems in the immigration system, if Democrats continue to stand in the way of his overhaul.

The Republican president tweeted before a meeting with GOP senators to say, ‘Democrats in Congress must vote to close the terrible loopholes at the Southern Border. If not, harsh measures will have to be taken!’

He did not elaborate on the threat or an immigration proposal his White House is preparing to present to lawmakers.

Fresh off his criminal justice reform success, Trump’s son-in-law Jared Kushner is leading the effort. He said last month that he was days away from submitting his plan to Trump, but the White House has yet to say what’s in it.

An official revealed Tuesday evening that Trump would focus in securing the border, protecting American wages and recruiting the best and brightest migrants, however. Family reunification and the preservation of humanitarian values were also said to be important but were not at the top of the White House’s list of considerations.

The senior official who spoke to a group of reporters said Trump will reveal a more detailed plan when he’s ready, and the meeting with senators was merely a first step in putting together a coalition.

‘I think he was very happy with the meeting today. I think we got a very positive reaction from people whose opinions he wanted to seek, and I think that was a good step forward to validate a lot of his instincts on what he wanted to produce and the work that he has subsequently done,’ the official stated.

White House press secretary Sarah Sanders told DailyMail.com and other reporters before the briefing that the afternoon meeting with senators was meant to be a ‘sounding board’ for options rather than a directive on how to proceed. 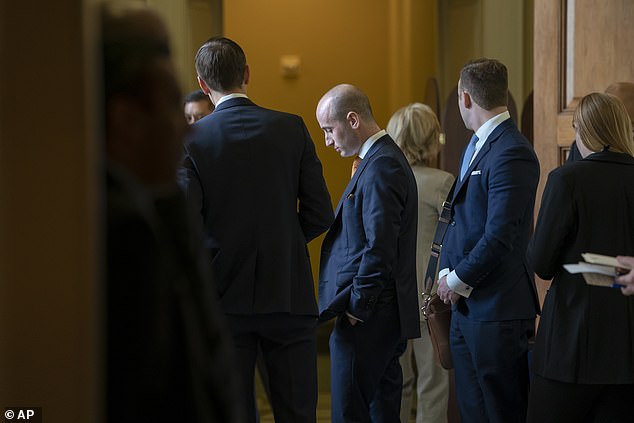 Stephen Miller, a senior adviser, to the president, is seen on Tuesday on Capitol Hill

She stressed that the immigration plan is the president’s, not Kushner’s, even though the senior White House official was the one who developed it.

‘It’s the president’s plan, it would be weird for him not to sign off on it,’ she said.

Later, a senior official, who requested not to be named, reinforced the White House’s point of view. ‘This is President Trump’s immigration plan,’ the person said during a readout of the meeting with senators.

‘We had a good opportunity to share with them the outline that we’ve been working on, and then get some of their feedback, so it was a very constructive meeting. We’ll work on further refining it based on some of the things we heard today,’ the Trump aide stated.

Trump is trying to avoid the mistakes Republicans made the first time they attempted to secure enough votes for an immigration overhaul after he assumed office, the White House official intimated.

‘People are always too quick to try and rush in to make deals,’ the person explained. ‘Once we have finalized what we believe is the right position, we’ll try to unify as many of the Republicans around that as possible, and then we’ll see.’

The person suggested that Democrats could come on board without much wrangling if the White House goes about rolling out its plan correctly.

‘Maybe the Democrats will like it. a lot of them say they’re for border security, a lot of Democrats say they’re for a merit-based system and so I think that we’re taking the first step of putting together these ideas in a very detailed format, and hopefully, that starts a very positive discussion,’ the Trump aide said. 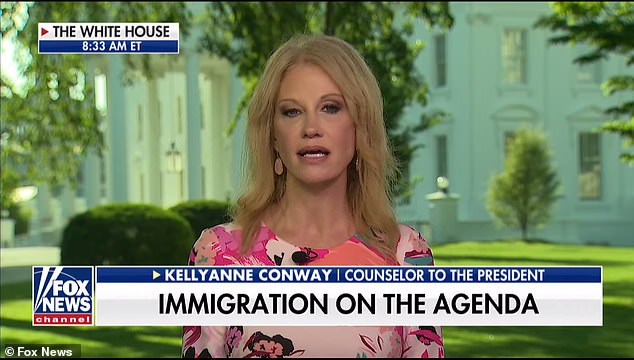 Kellyanne Conway, counselor to the president, suggested to DailyMail.com and other reporters Tuesday morning that the new plan would be similar to one Trump sent to Congress his first year in office

Kellyanne Conway, counselor to the president, suggested to DailyMail.com and other reporters last Tuesday morning that the new plan would be similar to one Trump sent to Congress his first year in office.

‘This president submitted to Congress, in October of 2017, a 70-point immigration plan, that has never been acted on,’ she noted.

‘This president has shown in the past a serious willingness to solve our Dreamers and DACA challenges, as well,’ she said. ‘So Jared Kushner and others have been talking about for awhile a big immigration plan, and we’re happy that the senators are coming over to be briefed on that.’

She declined to say, in response to a question from DailyMail.com, what is different about the new plan that Trump will be selling to senators.

The senior White House official suggested that the political climate could make immigration reform easier the second crack of the bat.

‘That the Democrats actually come to the table and their serious about it, because this will be our second attempt. Where’s their plan? What is their idea?’ she said.

Specific details of the plan are still under wraps, however.

‘I’ll let them reveal it later,’ she said when pressed. ‘The president could not be more clear, all through the campaign, through the transition.’

The White House said last week that it would reveal its immigration overhaul in the ‘next couple of weeks’ and it was ‘still in the process of figuring out all the details’ of a related sanctuary cities proposal.

Kushner said last month that he would turn his immigration reform draft into Trump by last week. It was expected to focus on the legal immigration and the president’s desire to move to a merit-based system.

Sanders subsequently told Fox News, ‘We’re still working through that process. I expect that to be over the next couple of weeks that plan will be rolled out. In the meantime we’re still calling on Congress to help us fix some of the immediate things that could be done.’

The official who talked to reporters on Tuesday night explained that Sen. Lindsey Graham was leading the short-term effort, which focuses on a immediate relief at the border.

Trump said that he’d be relying on Graham, who wasn’t at the White House on Tuesday, to help pass his grand immigration reform plan, also.

He also did not say what’s in a potential deal but said it would prioritize merit-based workers.

‘They have skills, they have talent. We have people coming in under these crazy laws that – I mean under these crazy laws that – I mean if they – if they need welfare or if they need hand outs in the next 50 years, they – they’re almost incentivized,’ he said. ‘Those are the people that we’re supposed to be taking and we take as few as possible of them, I’ll tell you.’

Kushner previewed the plan at a Time 100 summit in April. He said he’d submit it to Trump by the end of the month.

He said he solicited senior White House adviser and immigration hawk Stephen Miller’s input, as well as Chairman of the Council of Economic Advisers Kevin Hassett’s.

‘And I say that If that if I can get Stephen Miller and Kevin Hassett to agree on an immigration plan, then Middle East peace will be easy by comparison,’ he joked, making reference to another big issue he’s working on for the president.

He said the first issue he looked at as he put it together was border security, including a wall or a barrier.  Kushner said he’d spent a lot of time with border security professionals, learning what option would be most effective.

‘We want to protect our country’s humanitarian values. We want to make sure we’re reunifying families, and we want to do this in a way that allows our country to be competitive long term,’ he said. ‘And my hope is we can really do something that unifies people around what we’re for on immigration.’