President Donald Trump waxed about the beauty of the White House in snow on Sunday as the government shutdown hit day 23.

‘Wish I could share with everyone the beauty and majesty of being in the White House and looking outside at the snow filled lawns and Rose Garden. Really is something – SPECIAL COUNTRY, SPECIAL PLACE!,’ he tweeted.

First Lady Melania Trump tweeted photos of snowy Washington D.C. that appear to be taken from the White House residence.

One photo shows the ellipse and the national mall in the snow, with the Washington Monument in the distance. The other shows the snow covered White House law and the West Wing, where the Oval office is located. 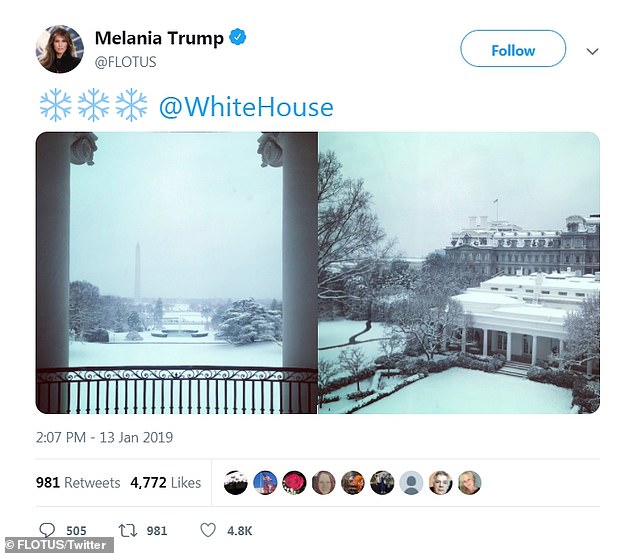 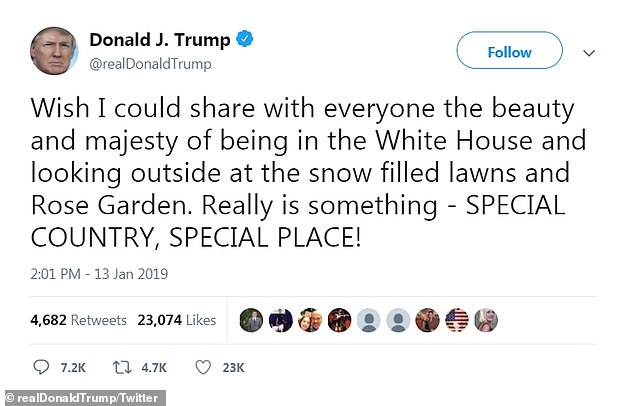 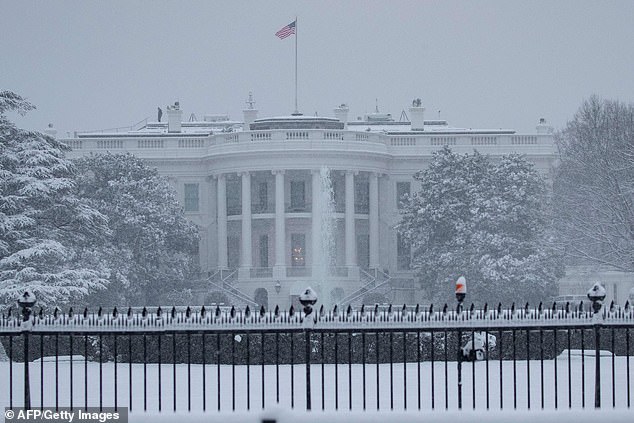 At least nine people have died in the storm that battered the Midwest and Washington D.C. this weekend, dumping up to 10 inches on the nation’s Capitol.

More than 785 flights had been canceled and another 1,720 delayed on Sunday with 45 flights preemptively grounded for Monday.

Lawmakers are scheduled to return to Capitol Hill on Monday although it’s unclear if that will be affected by the weather. None of the votes scheduled in the House or Senate for Monday evening deal with reopening the government.

Negotiations are as frozen as the ground in Washington as the shutdown became the longest in America’s history over the weekend.

No meetings between the White House and Democrats are scheduled after Trump walked out of a sit down last week.

The president spent the weekend at the White House with nothing on his public schedule.

His twitter feed remained full, however, as he spent Saturday ranting about special counsel Robert Mueller, the FBI, its agents, and a New York Times report that the bureau was investigating Trump as a possible secret of Russia.

On Sunday, he accused Democrats of ‘having fun’ while he is in the White House waiting to make a deal to end the government shutdown.

‘I’m in the White House, waiting. The Democrats are everywhere but Washington as people await their pay. They are having fun and not even talking!,’ he tweeted.

He also wrote on Saturday: ‘There’s almost nobody in the W.H. but me, and I do have a plan on the Shutdown.’

He did not share any details of that plan. Sen. Lindsey Graham told ‘Fox News Sunday’ the plan was to make a deal.

‘The plan is to do a deal,’ Graham said. 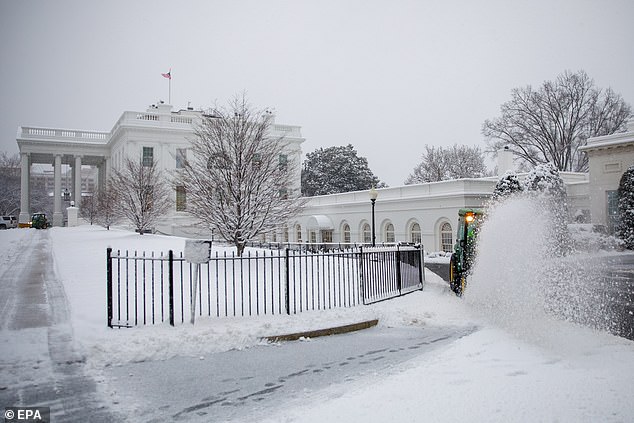 The National Park Service clears the driveways at the White House Residents of Washington D.C. held a giant snowball fight on the National Mall

Talks to reopen the government are at an impasse.

The president has vowed not to sign any spending package that doesn’t include $5.7 billion to build his border wall and Democrats’ are holding firm on the $1.3 billion they’ve offered in border security.

Trump has touted how he’s stayed in Washington to work as lawmakers left town for the holidays and also left town this weekend after votes on Friday.

‘I like the symbol of being here,’ he told Fox News on Saturday.

He’s especially targeted a group of 30 Democrats who went to Puerto Rico over the weekend with the Congressional Hispanic Caucus to learn about the infrastructure and economic challenges Puerto Rico is facing in the wake of Hurricane Maria, which devastated the island.

Some of the lawmakers were expected to attend ‘Hamilton’ on Friday, its opening night, CBS News reported.

‘Hamilton’ creator Lin-Manuel Miranda has reprised his starring row in the production for a two-week run in Puerto Rico. Proceeds are going to charity.

‘I’d rather see the Dems come back from their vacation and act,’ Trump told Fox News Saturday night. 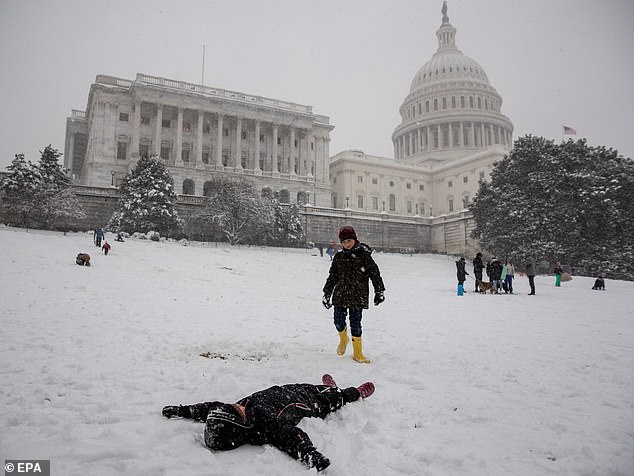 But his criticism, his staying in place, and his social media push have not moved the needle.

Nine out of 15 federal agencies – and the White House staff itself – have been without funds since Dec. 22.

And three new polls show the GOP is taking the blame.

A Washington Post/ABC News poll found that 53 percent say Trump and the Republicans are at fault for the shutdown while 29 percent blame Democrats and 13 percent say both sides have equal responsibility.

A CNN poll also found Trump bearing the blame: 55 percent said he is responsible for the shutdown while 32 percent blame the Democrats and 9 percent blame both. 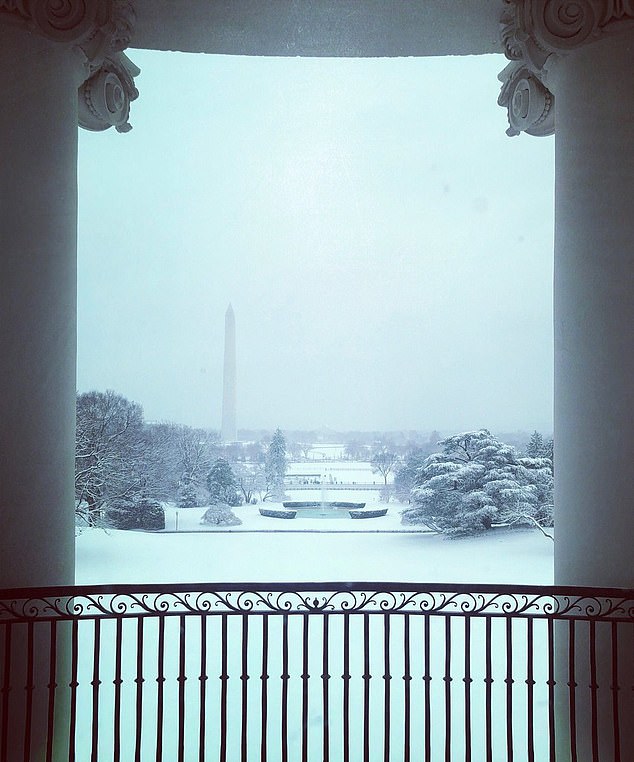 One photo the first lady posted shows the ellipse and the national mall in the snow, with the Washington Monument in the distance 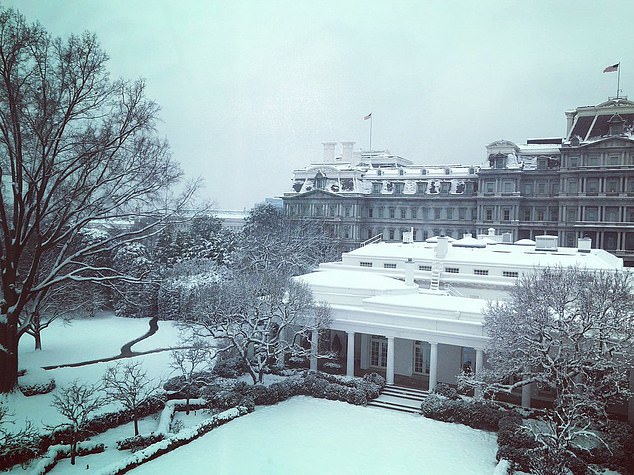 The other photo the first lady posted shows the snow covered White House law and the West Wing, where the Oval office is located

Graham on Sunday said Trump is ready to make a deal with Democrats to reopen the government.

‘I just talked to him about 30 minutes ago. He said let’s make a deal,’ Graham said on ‘Fox New Sunday.’

The senator from South Carolina also urged a breathing period of three weeks where the government would reopen while both sides negotiation a price tag for the president’s border wall.

‘I would urge them to open up the government for a short period of time, like three weeks before he pulls the plug, see if we can get a deal. If we can’t at the end of three weeks, all bets are off, see if he can do it by himself through the emergency powers. That’s my recommendation,’ Graham said.

Democratic Sen. Tim Kaine also called for the government to be opened before talks continue on Trump’s border wall.

‘I will say this: we first should reopen government. Why punish people who are applying for food stamps because the president is having a temper tantrum? Open government first,’ he said on NBC’s ‘Meet the Press.’