The president emerged from the White House around 5:30 p.m. Tuesday evening and launched into an hour-long speech previewing what’s to come in his presidency, praising his accomplishments and berating the presumed Democratic nominee – bringing into question Biden’s intelligence and state of mind.

At the start of the press briefing, which was not originally on the president’s Tuesday schedule, Trump lauded that he signed an executive order that he says will ‘hold China accountable for its oppressive actions against the people of Hong Kong,’ and a second order that will end preferential treatment for Hong Kong.

‘Hong Kong will now be treated the same as mainland China, no special privileges, there’s no special economic treatment and no export of sensitive technologies,’ the president said to reporters gathered in the White House Rose Garden.

‘In addition to that, as you know, we’re placing massive tariffs and have placed very large tariffs on China,’ Trump continued. ‘Billions of dollars have been given to the United States, of which I’ve given quite a bit to the farmers and ranchers.’

But soon the president, who has been on a severely limited travel schedule, including from hosting his usual-massive campaign rallies, turned the briefing into a lengthy list of grievances against Biden among ranting on other campaign talking points.

‘Joe Biden’s entire career has been a gift to the Chinese Communist Party and to the calamity of the errors that they’ve made. They’ve made so many errors,’ the president used as a segue from talking about China to lambasting Biden. ‘And it’s been devastating for the American worker.’ 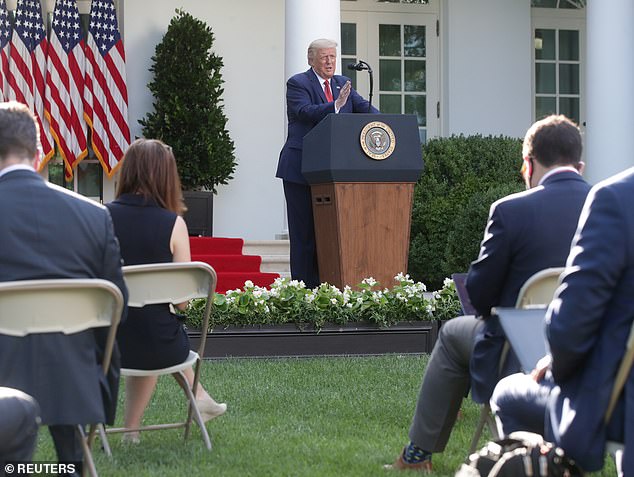 ‘Joe Biden’s entire career has been a gift to the Chinese Communist Party,’ Trump said in a segue from talking about China to railing against presumed Democratic nominee Joe Biden 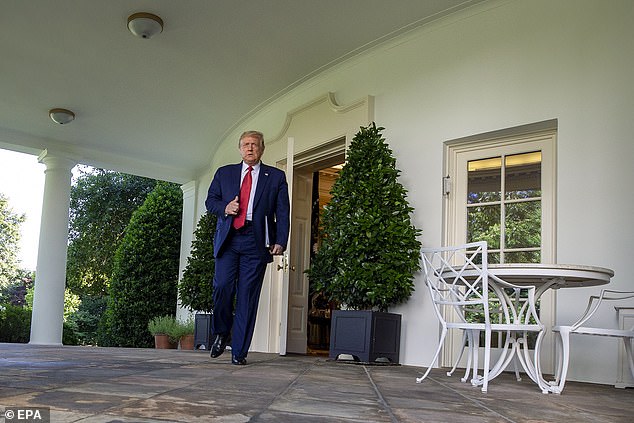 Entering the Rose Garden: Trump emerged from the Oval Office around 5:30 p.m. Tuesday to deliver remarks to reporters gathered for the previously unscheduled event 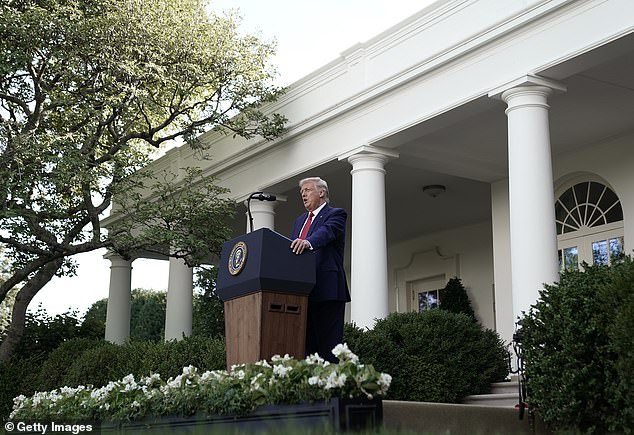 Trump also railed against Biden’s environmental policy, which rolled out today and was contributed to by Rep. Alexandria Ocasio Cortez, who he called ‘a young woman ‘ who is ‘not talented in many ways’ 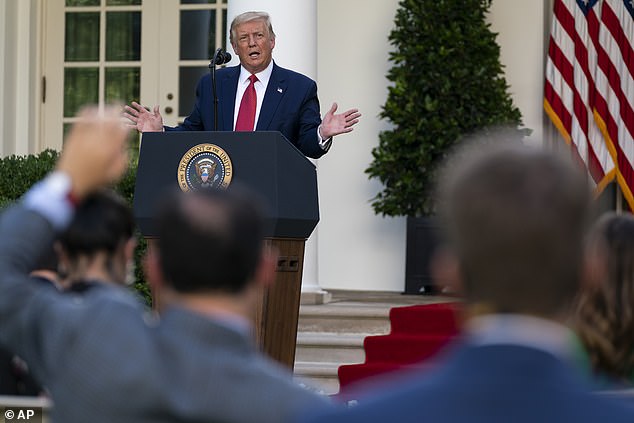 ‘China has taken out hundreds of billions of dollars a year from our country, and we’ve rebuilt China. Give them all the credit in the world. I don’t give the credit for the people who used to stand here, because they allowed this to happen,’ he said, referencing former President Barack Obama and his Vice President Joe Biden.

During a speech in Wilmington, Delaware, also on Tuesday, Biden also went on the attack against the president.

‘It’s gotten bad enough that even Donald Trump finally decided to wear a mask in public,’ scoffed Biden, who has worn a mask every time he has gone out in public since the pandemic roiled the nation.

He also said Trump’s plan of ”Open Everything Now’ isn’t a strategy for success, it’s barely a slogan.’

The presumptive Democratic nominee then ridiculed the president’s record on green energy sources. 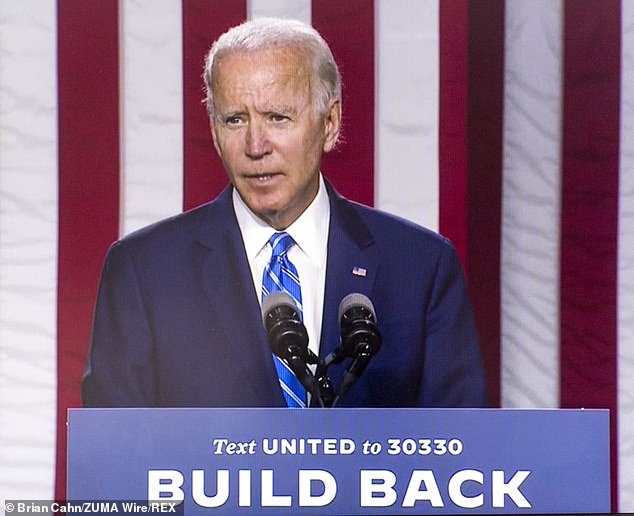 Former Vice President Joe Biden also chastised Trump during a speech in Wilmington on Tuesday, where he claimed the president’s plan to ‘Open Everything Now’ isn’t a strategy for success, it’s barely a slogan’

Trump, 74, however, dismissed Biden’s, 77, environmental plan as another version of the Green New Deal, since Alexandria Ocasio Cortez, the author of the progressive plan, contributed to his policy proposal on how he would handle environment issues if elected in November.

‘Joe Biden put AOC, a young woman – not talented in many ways – in charge of his energy plan and the environment,’ Trump said. ‘When I first saw the Green New Deal, I thought it was a joke.’

The president also said during the Rose Garden rant that if Biden was asked what ‘carbon’ is, he wouldn’t be able to define the word.

As massive Black Lives Matter protests continue across the country following the death of George Floyd toward the end of May, a branch of the movement has been pushing for defunding of police – an initiative the president has tried to peg on Biden.

Biden has come out against calls to defund the police, claiming reform and restructure is needed.

The former vice president, who before his White House gig was a senator from Delaware for three-and-a-half decades, has ramped up his attacks against Trump.

Trump has also been experimenting with new attacks against Biden as none have seemed to stick like they did with Hillary Clinton in 2016 – he has tried out new nicknames other than ‘Sleepy Joe,’ including ‘Corrupt Joe.’