WASHINGTON, D.C. (AP) – President Donald Trump urged House Republicans to move swiftly on passing a budget bill during a conference call Sunday, clearing the way for what he described as historic tax cuts.

Trump and Vice President Mike Pence both joined the House GOP call in which Trump called on members to adopt the budget passed by the Senate this week, so that they can move on to passing his tax reform plan.

Trump told the members they were on the verge of doing something historic, according to one Republican official, who, like others, spoke on condition of anonymity because they were not authorized to discuss publicly what was intended as a private update for members.

Another GOP aide familiar with the conversation said that Trump told the members again and again that the party would have a steep price to pay in next year’s midterm elections if they failed to pass his plan, which would slash the corporate tax rate to 20 percent and double the standard deduction used by most average Americans. The president also said multiple times that, beyond the looming elections, his plan was the right thing to do for country, the person said.

The Senate last week passed a budget that includes rules that will allow Republicans to get tax legislation through the Senate without Democratic votes and without fear of a Democratic filibuster. The House had passed a different budget, but House Republicans signaled Friday they would simply accept the Senate plan to avoid any potential delay on the tax measure.

Republicans are desperate to rack up a legislative win after a series of embarrassing failures that have come despite the fact that the party controls both chambers of Congress and the White House. At the top of the list: their stalled attempts to pass legislation repealing and replacing “Obamacare.” If tax reform doesn’t pass, many in the party fear an all-out revolt in 2018.

On the call, House Speaker Paul Ryan told members he hoped to pass a revised Senate budget bill this week to increase the chances that tax reform can be enacted by the end of the year.

The leaders emphasized the need for the House to pass the Senate budget to avoid negotiations between the two chambers that could slow the process, said two lawmakers on the call, who also spoke on condition of anonymity. They said the goal is for House passage of the budget this week, putting the House on track to approve a tax bill by Thanksgiving.

White House budget director Mick Mulvaney, had told Fox News earlier Sunday that the House was working “very quickly to accept the Senate amendments,” and said the plan “may save as many as 10 or 12 legislative days, which is a big deal.”

Trump, who spent much of the weekend at his gold course in Virginia, will also work to rally support for the plan on the Hill Tuesday at a lunch with Senate Republicans.

But as the focus turns to taxes, Congress continues to struggle with health care legislation.

Senate Majority Leader Mitch McConnell said Sunday he’d be willing to bring bipartisan health care legislation to the floor – if Trump makes clear he supports it. A proposal by two senators – Republican Lamar Alexander of Tennessee and Democrat Patty Murray of Washington – would extend for two years federal insurance payments that Trump has blocked, in an effort to stabilize insurance markets. But Trump has offered mixed signals, alternately praising and condemning the effort – confusing Democrats and Republicans alike.

Asked whether he would bring the bill to the floor, McConnell said on CNN’s “State of the Union” that he was waiting “to hear from President Trump what kind of health care bill he might sign.”

“If there’s a need for some kind of interim step here to stabilize the market, we need a bill the president will actually sign. And I’m not certain yet what the president is looking for here, but I will be happy to bring a bill to the floor if I know President Trump would sign it,” the Republican said. He added of Trump: “I think he hasn’t made a final decision.”

The plan unveiled last week likely has 60 votes in the Senate, mostly from Democrats, and Senate Minority Leader Chuck Schumer on Sunday urged McConnell to bring it to the floor “immediately, this week.”

“This is a good compromise,” Schumer said on NBC’s “Meet the Press.”

Trump at first suggested he supported the temporary fix as he continues to hold out hope for repeal-and-replace legislation. But White House officials said later that Trump would only sign an interim bill that lifted the tax penalties that Obama’s health care law imposed on people who don’t buy coverage and employers who don’t offer plans to employees, among other demands Senate Democrat say are non-starters.

Mulvaney said on CBS’ “Face the Nation” that Trump doesn’t want to back a plan “without also getting something for folks who are being hurt.”

“I think there’s actually a pretty good chance to get a deal,” he said. “It’s just Murray-Alexander in its current form probably isn’t far enough yet.”

“Look, this is not about personalities. This is about achievement. And in order to make policy, you have to actually win the election,” he said on Fox News. “And some of these folks that you’ve been quoting, as I said are specialists on nominating people who lose.” 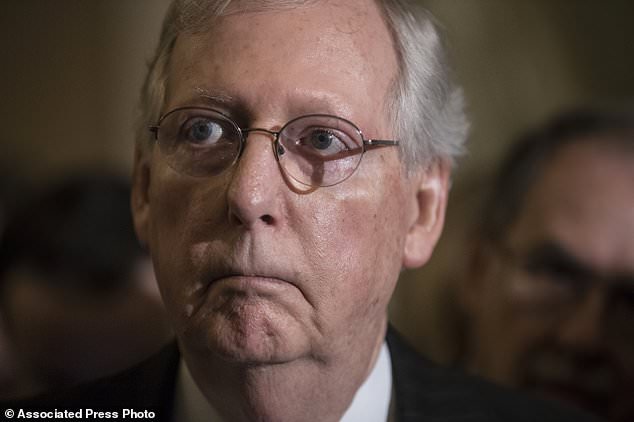 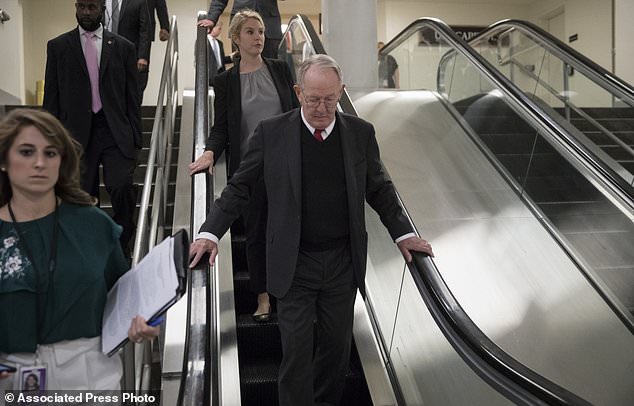 Sen. Lamar Alexander, R-Tenn., takes the escalator down as he returns to his office after appearing on the Senate floor with Sen. Patty Murray, D-Wash., to defend their bipartisan proposal for resuming federal subsidies to health insurers that President Donald Trump has blocked, at the Capitol in Washington, Thursday, Oct. 19, 2017. (AP Photo/J. Scott Applewhite)