President Trump leaped at the chance on Wednesday to harangue the media for a debacle involving Michael Cohen’s attorney Lanny Davis.

Davis admitted to BuzzFeed News that he was a source for a bombshell CNN report last month claiming that Cohen was willing to testify to Special Counsel Robert Mueller that Trump knew about a meeting between Don Trump, Jr. and a Russian lawyer at Trump Tower in 2016. That claim Davis now says he cannot confirm.

Trump claimed in a tweet Wednesday that anonymous sources are typically ‘fiction made up’ by ‘Enemy of the People’ reporters, even though Davis admits to making the claims he says he can no longer back up. 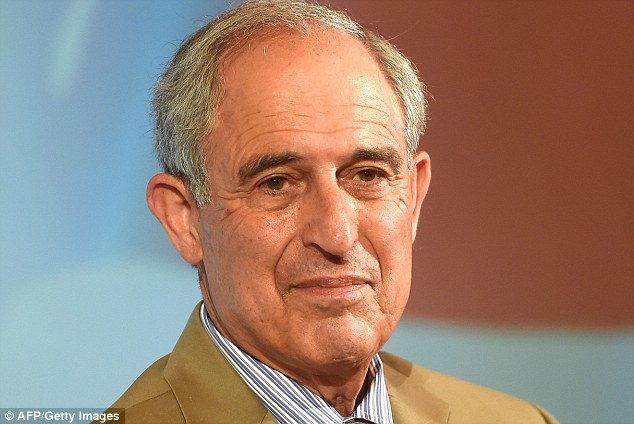 Lanny Davis (above) has backpedaled on several key claims, severely undermining the possibility that Cohen could tie President Trump to claims of Russian election interference 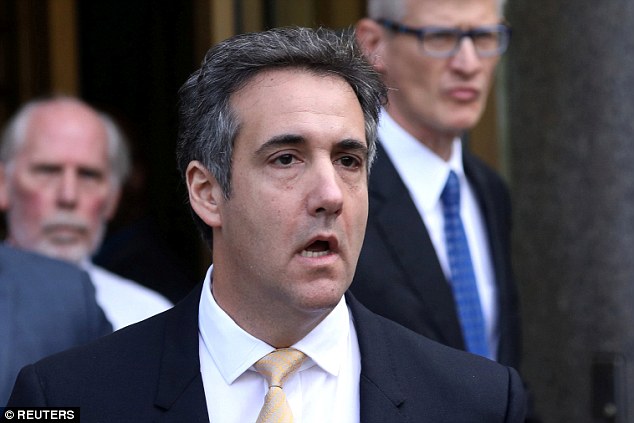 Cohen (above) pleaded guilty last week to several charges, which Davis says allowed him to finally speak out to clarify the record now that the criminal investigation is ended

‘The fact is that many anonymous sources don’t even exist. They are fiction made up by the Fake News reporters,’ the president tweeted. ‘Look at the lie that Fake CNN is now in. They got caught red handed! Enemy of the People!’

A follow-up tweet claimed: ‘When you see “anonymous source,” stop reading the story, it is fiction!’

Davis says that he was a background source for CNN , and couldn’t clear up the record until Cohen pleaded guilty last week, because of the ongoing criminal investigation.

But CNN says it had other sources, as well, and stood by its reporting after Davis backpedaled on several key claims and sowed doubt that Cohen could tie Trump to Russian election interference.

In a series of interviews, Davis backtracked two assertions: that Cohen saw Trump being advised beforehand of the notorious Trump Tower meeting, and that Cohen could testify that Trump was aware of Russian hacking.

Trump lawyer Rudy Giuliani has also made incorrect claims about the Trump Tower meeting and admitted in a profile this week to making mistakes in his unpaid representation of the president.

Former Trump attorney John Dowd said Wednesday on Fox News that Davis’ conduct, which sparked a debate about how sourcing is handled by news agencies, was ‘despicable’ and ‘indicative’ of what Trump is up against.

‘I don’t know how he does it,’ he said. ‘It’s a great burden on the presidency.’

Slamming Davis, a longtime defender of former President Bill Clinton, Down said: ‘Lanny Davis is no surprise, I don’t know why anybody would find him credible in the first place.’

The CNN report, which got prime-time play on the network, excited the President’s opponent’s with the possibility that Cohen had and was willing to offer prosecutors information damaging to Trump.

Other outlets that raced to confirm the CNN ‘scoop’ in July, including the New York Post and Washington Post, have now admitted that Davis was their source, and published the lawyer’s apologies for misleading them.

‘I regret that I wasn’t clear enough to The Post. I should have been more clear. I could not independently confirm the information in the CNN story,’ Davis told the New York paper.

‘I regret my error,’ Davis said.

Davis also is hedging suggestions he made on television last week that Cohen could tell Mueller about whether Trump was aware of and encouraged Russian hacking during the 2016 campaign before it became publicly known. 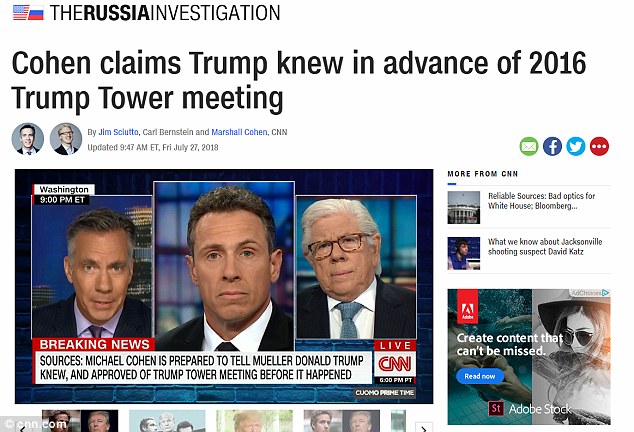 After suggesting to CNN last Wednesday that ‘Cohen was an observer and was a witness to Mr. Trump’s awareness of those emails before they were dropped,’ Cohen told the Washington Post, ‘there’s a possibility that is the case. But I am not sure.’

Davis is not alone in backtracking on his claims, with Trump’s lawyer Rudy Giuliani also admitting he had misspoken about the Trump Tower meeting.

He told NBC News on August 19 that he didn’t know if participants in the meeting, including Trump Jr and Paul Manafort, knew that lawyer Natalia Veselnitskaya ‘was Russian at the time.’

‘All they had was her name,’ Giuliani said.

In fact, emails released by Trump Jr himself make clear that he was explicitly told an attendee at the meeting would be a ‘Russian government attorney’ who wanted to provide damaging information about Clinton.

Additionally, Trump Jr has said he didn’t have the lawyer’s name prior to the meeting.

Trump, who has denied knowing about the meeting, seized on Davis’ about-face.

‘Michaels Cohen’s attorney clarified the record, saying his client does not know if President Trump knew about the Trump Tower meeting (out of which came nothing!),’ Trump tweeted on Saturday. ‘The answer is that I did NOT know about the meeting. Just another phony story by the Fake News Media!’