Donald Trump is warning that he’ll hit San Francisco with EPA violations because the city’s burgeoning homelessness population is overwhelming drains with waste and sending trash – including dirty needles – into the ocean.

The president said the Environmental Protection Agency will be ‘putting out a notice’ of violations in San Francisco soon, while speaking to reporters aboard Air Force One Wednesday evening.

Trump spoke on the tremendous amount of waste accumulating in the northern California city that is going through storm drains and pouring into the ocean.

‘They have to clean it up. We can’t have our cities going to hell,’ he added. 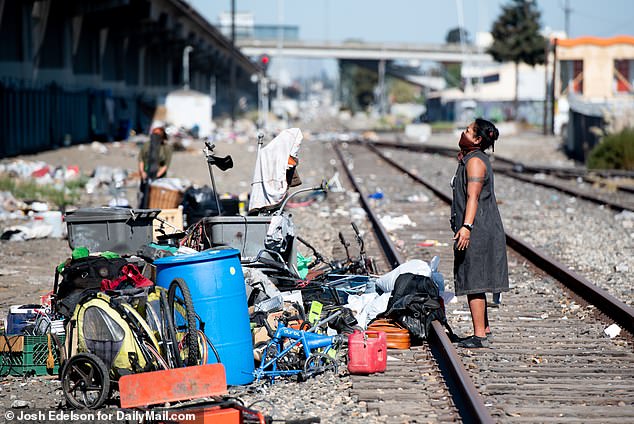 San Francisco has seen its homeless population swell to 8,011 people in January 2019, a 17 percent increase from 2017 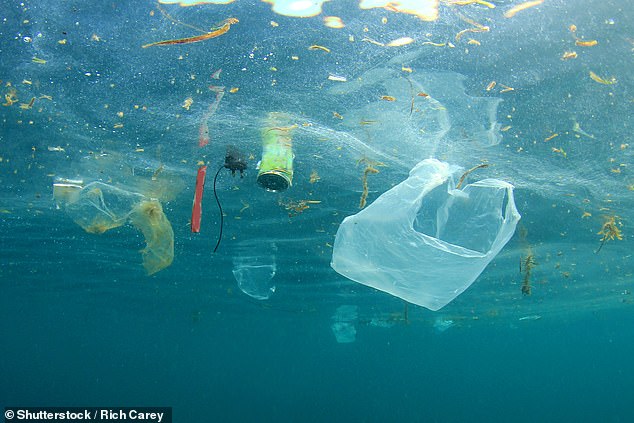 His comments come as the president flew back to Capitol Hill after two days of fundraising in California.

Prior to his statements Wednesday, there had been no indication Trump intended to use environmental laws to tackle the homelessness crisis. It’s not clear what laws EPA would cite in doubling down on San Francisco.

In his rant, he railed against Los Angeles and San Francisco for not doing enough to address the growing homelessness population.

Trump’s warnings are his latest jab against California, a blue state he’s continually sparred with throughout his time in office.

However, there is stock in the president’s concern as San Francisco has seen its homeless population swell to 8,011 people in January 2019, according to the San Francisco Chronicle, a 17 percent increase from 2017.

Furthermore tens of thousands of hypodermic needles are collected every month from the streets of San Francisco. In August 2018 alone the city’s Public Health Department’s needle recovery program retrieved 164,264 needles through a disposal program and street cleanups.

‘To be clear, San Francisco has a combined sewer system, one of the best and most effective in the country, that ensures that all debris that flow into storm drains are filtered out at the city’s wastewater treatment plants,’ Breed said to the New York Times Wednesday evening.

‘No debris flow out into the bay or the ocean.’ 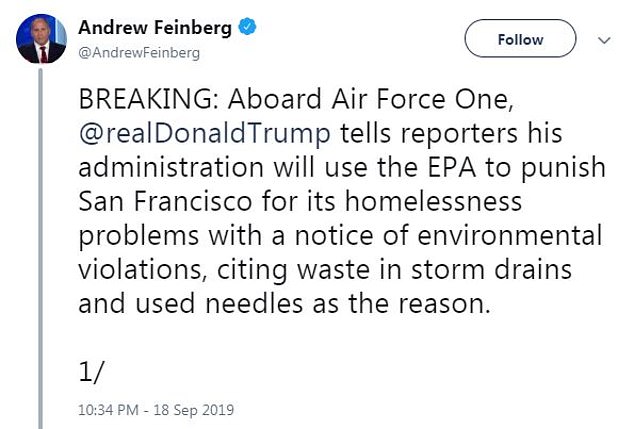 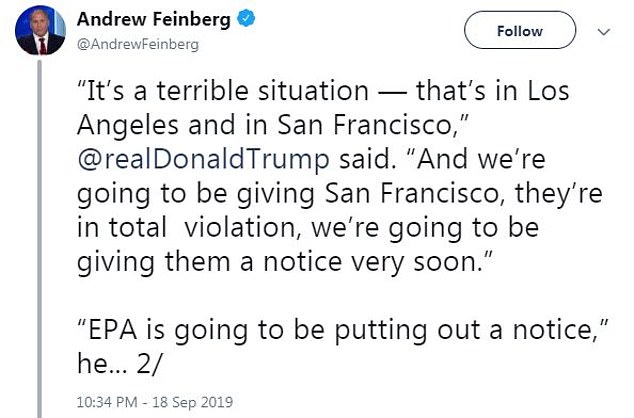 Trump spoke about the EPA violation warning to reporters while returning to D.C. from California aboard Air Force One on Wednesday evening

She added that San Francisco plans to add 1,000 shelter beds by 2020 and is trying to pass a $600million bond to build more affordable housing and increase social services for people with mental illnesses and drug addictions.

‘In San Francisco we are focused on advancing solutions to meet the challenges on our streets, not throwing off ridiculous assertions as we board an airplane to leave the state,’ she added.

Sen. Dianne Feinstein said Trump was ‘right that homelessness is a big problem in California. But how he explains the situation is wrong and raises significant concerns that his so-called solutions will only make matters worse.’

‘When he’s talking about homelessness and solving that problem, and affordability, that goes across party lines,’ GOP Rep. Kevin McCarthy, the House minority leader, said in defense of Trump.

‘Drive around — every community, even in Bakersfield — homelessness is the No. 1 issue,’ he added, referring to his rural Central Valley district outside of Los Angeles.

Trump’s stop in California on Wednesday was to take a tour of a border wall going up near San Diego. 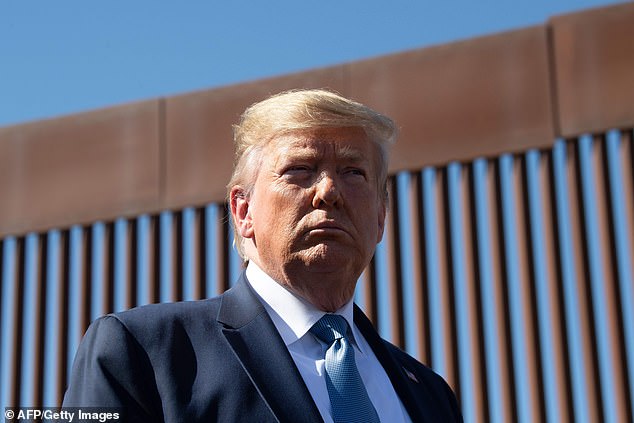 Trump’s stop in California on Wednesday was to take a tour of a border wall going up near San Diego. Pictured Wednesday in front of the border fence in Otay Mesa 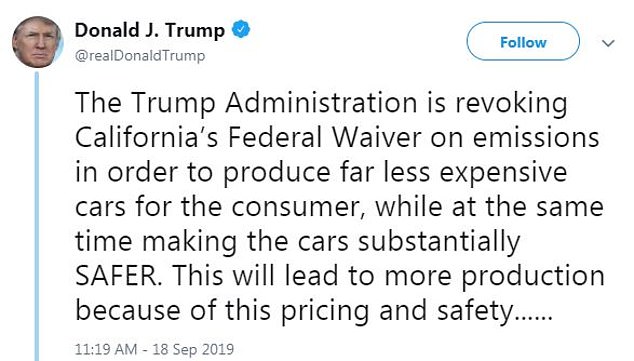 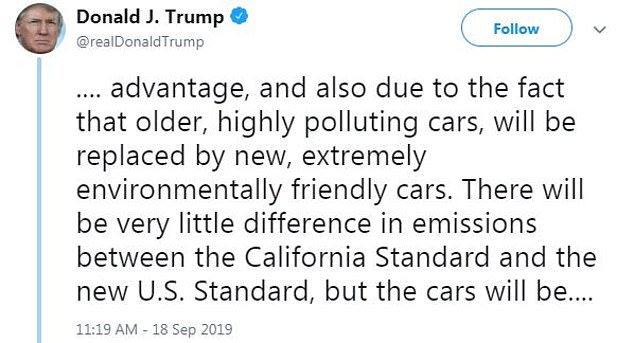 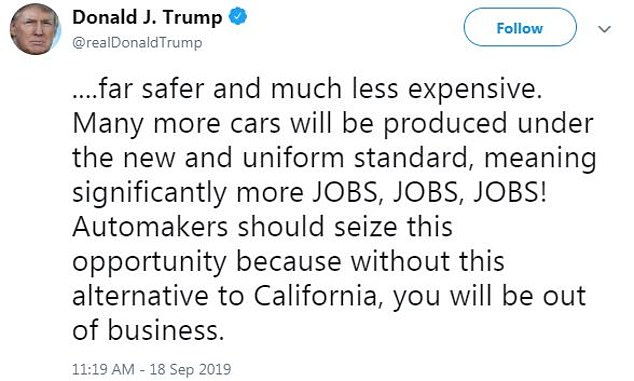 Trump said he’d do it to encourage safer, more emission-friendly, and less expensive cars on the road and in turn create more jobs for Americans.

‘The Trump Administration is revoking California’s Federal Waiver on emissions in order to produce far less expensive cars for the consumer, while at the same time making the cars substantially SAFER. This will lead to more production because of this pricing and safety…..’

‘.. advantage, and also due to the fact that older, highly polluting cars, will be replaced by new, extremely environmentally friendly cars,’ he added.

On Tuesday while aboard Air Force One en route to San Francisco, Trump said he was considering creating an ‘individual task force’ as a possible solution to homelessness.

‘We have people living in our … best highways, our best streets, our best entrances to buildings … where people in those buildings pay tremendous taxes, where they went to those locations because of the prestige,’ Trump said.

‘In many cases, they came from other countries and they moved to Los Angeles or they moved to San Francisco because of the prestige of the city, and all of a sudden they have tents. Hundreds and hundreds of tents and people living at the entrance to their office building. And they want to leave. And the people of San Francisco are fed up, and the people of Los Angeles are fed up.’