A sarcastic President Trump praised the top Democrat on the House Intelligence Committee, Rep. Adam Schiff, for assigning some blame to President Obama for the Russians’ 2016 election meddling effort.

‘Finally, Liddle’ Adam Schiff, the leakin’ monster of no control, is now blaming the Obama Administration for Russian meddling in the 2016 Election,’ Trump said in a Sunday morning tweet. ‘He is finally right about something. Obama was President, knew the threat, and did nothing. Thank you Adam!’

President Trump sent out a flurry of tweets first thing Sunday morning, including several that sarcastically thanked the House Intelligence Committee’s top Democrat, Rep. Adam Schiff, for assigning some of the blame for the Russia hack on President Obama’s administration 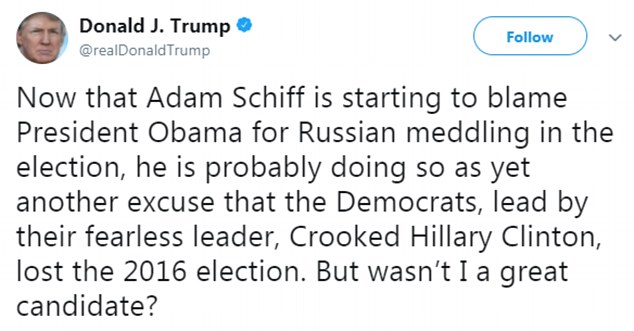 President Trump went after Democratic Rep. Adam Schiff Sunday morning, labeling him ‘liddle’ and a ‘leaker’ and sarcastically thanking him for being critical of the role President Obama’s administration played in the Russian 2016 presidential election hack 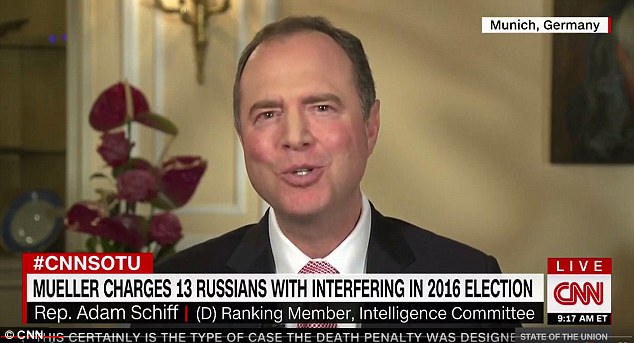 Rep. Adam Schiff appeared on CNN’s State of the  Union Sunday morning and was asked about the indictments handed down Friday 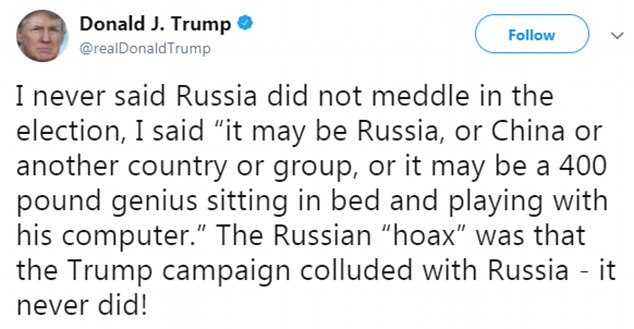 President Trump called attention to a statement he made back in September 2016, in which he didn’t wholly assign blame to Russia for the 2016 election-year hack. The president seemed more inclined to blame Russia now that Mueller’s probe indicted 13 Russian nationals

‘We should have called them out much earlier,’ Schiff said. ‘While I respect the motive in terms of the Obama administration, they didn’t want to be seen as meddling, the American people had a right to know what was going on and could be trusted to do the right thing with it.’

Trump, in a series of tweets Sunday morning, latched on to Schiff’s statements with glee.

‘Now that Adam Schiff is starting to blame President Obama for Russian meddling in the election, he is probably doing so as yet another excuse that the Democrats, lead by their fearless leader, Crooked Hillary Clinton, lost the 2016 election,’ Trump also said. ‘But wasn’t I a great candidate?’

President Trump was emboldened by Special Counsel Robert Mueller’s decision to indict 13 Russian nationals on Friday, with Deputy Attorney General Rod Rosenstein saying, ‘There is no allegation in this indictment that any American was a knowing participant in this illegal activity.’ 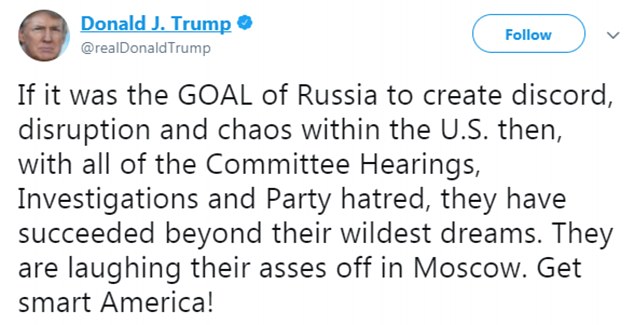 President Trump suggested that the multiple investigations into Russian interference – including the three on Capitol Hill – are what the Russians want because they create ‘discord, disruption and chaos’

President Trump also lashed out at the Obama administration Sunday morning over a payment made to Iran, which was part of the Iran nuclear deal. Iran had purchased military equipment from the U.S., but it was never delivered because of the Iranian revolution

The White House sent out a statement shortly after the indictments were made public indicating that the president was fully briefed on the matter and was ‘glad to see the Special Counsel’s investigation further indicates – that there was NO COLLUSION between the Trump campaign and Russia and that the outcome of the election was not changed or affected.’

With these indictments handed down, the president was more willing to say that Russia had indeed interfered in the 2016 election cycle.

‘I never said Russia did not meddle in the election, I said, “it may be Russia, or China or another country or group, or it may be a 400 pound genius sitting in bed playing with his computer,”‘ Trump said, repeating a claim he first made during a presidential debate against Hillary Clinton in September 2016.

By this point, the U.S. intelligence agencies had squarely pointed a finger at Russian leader Vladimir Putin.

‘The Russian “hoax” was that the Trump campaign colluded with Russia – it never did!’ Trump added Sunday.

The president also suggested that the multiple investigations on Russia interference played into the hands of the Russians, with Schiff leading one of the three on Capitol Hill.

‘It if was the GOAL of Russia to create discord, disruption and chaos within the U.S. then, with all of the Committee Hearings, Investigations and Party hatred, they have succeeded beyond their wildest dreams,’ Trump wrote. ‘They are laughing their asses off in Moscow.’

‘Get smart America!’ the president said.

In taking another swipe at the Democrats, this time President Obama, Trump also noted how he had ‘never gotten over that Obama was able to send $1.7 Billion Dollars in CASH to Iran and nobody in Congress, the FBI or Justice called for an investigation!’

The Obama administration sent money back to Iran as part of the nuclear deal, cash that Iran had paid to the U.S. for military equipment in 1979, but because of the Iranian revolution the equipment was never delivered.