Kayleigh McEnany asserted Thursday that President Donald Trump will not let ‘science stand in the way’ of his push to reopen schools in the fall in the midst of the coroanvirus pandemic.

The White House press secretary claimed during her press briefing that science is on the side of reopening schools amid a massive spike in cases and said the U.S. is the ‘outlier’ of Western societies in not moving to get students back in the classroom.

‘The science is on our side here,’ McEnany told reporters gathered in the James S. Brady Briefing Room Thursday afternoon.

‘We encourage for localities and states to just simply follow the science, open our schools – it’s very damaging to our children,’ she continued.

McEnany also railed against any partial measures on reopening.

‘When he says open, he means open and full – kids being able to attend each and every day at their school,’ she insisted of the president’s push. ‘The science should not stand in the way of this.’

A new poll released Thursday morning shows that 72 per cent of parents of kindergarten through twelfth grade students are against reopening.

The Yahoo News/YouGov poll also shows that nearly two-thirds of American adults, parents or otherwise, are against Trump pressuring schools to restart in-person classes in the fall.

While coronavirus cases continue to surge in a recent spike in infections rate in the U.S., the Trump administration has begun a push for an end to school lockdowns and announced last week that the Centers for Disease Control will soon be issuing new guidance toward reopening. 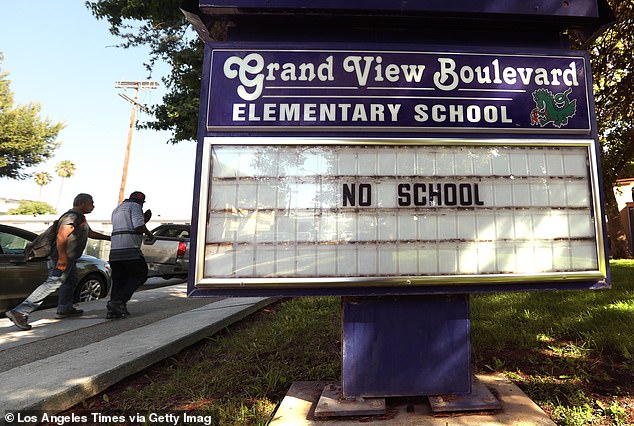 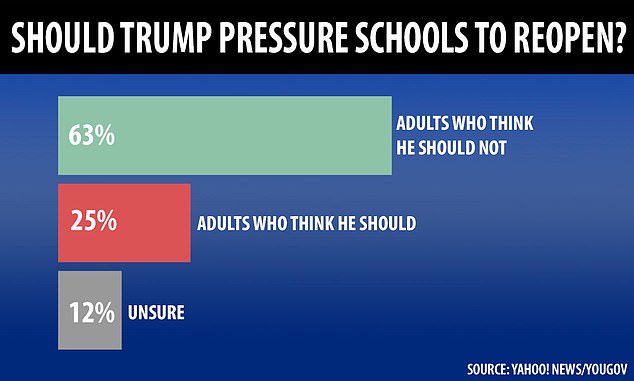 A new poll released Thursday shows that only 25 per cent of American adults feel that Trump should be pressuring schools to reopen, while 63 per cent are against the demands

The July 11-14 survey shows that only 25 per cent of Americans feel the president should be putting the pressure on schools to reopen and 12 per cent of respondents are unsure how they feel.

When the poll is adjusted to look at the results by party affiliation, only 10 per cent of Democrats feel Trump should be putting the pressure on schools and 83 per cent in the party feel he should not.

Republicans have a much smaller split, with 48 per cent feeling Trump should be asserting his influence over the school’s reopening schedule, and 39 per cent feel he should not.

The majority, if not all, of public schools closed during the Spring and transitioned to full online or remote classes and learning as coronavirus spread across the U.S.

There are now indications that the educational institutions could remain closed until the winter as the infection rate continues to surge in several states.

There are now more than 3.5 million confirmed cases in the U.S., far more than any other country has reported, and the death toll has surpassed 137,000.

Of the 1,504 American adults polled, only 30 per cent believe the Trump administration is doing everything in its power to mitigate and stop the incessant spread of the virus.

Seventy-seven per cent of respondents assert that Washington’s priority should be to limit the spread of COVID-19, but another 23 per cent say that the focus should be on reopening schools, regardless of the risk it could pose to public health. 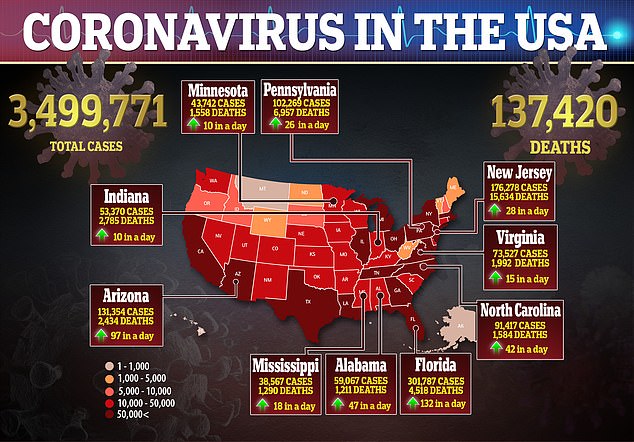 A whopping 95 per cent of Democrats polled agree that reopening schools should be put on the back-burner to focus more on public health.

McEnany revealed Thursday that while Vice President Mike Pence and CDC Director Robert Redfield revealed new guidelines would be coming this week, she is unsure when the documents would be released.

‘We really would like to see schools open, as has been clear,’ McEnany said. ‘We don’t think our children should be locked up at home with devastating consequences when it’s perfectly safe for them to go to school as is emphasized by many medical experts.’

She added: ‘So the president is very keen on seeing school’s reopen, it’s the only thing that’s fair to America’s children.’

Teachers, school administrators and parents are looking for the CDC guidance, which is supposed to be coming this week in form of five documents, to be able to get students back in the classroom come the fall.

Redfield also asserted during a press conference at the Department of Education last Wednesday that the guidance should not be used as a rationale for schools to remain closed.