Donald Trump won’t say if he will order federal buildings to obey D.C. mask mandate as he claims his wall is protecting against the virus and PRAISES Republican governors seeing surging cases

President Donald Trump, who has been more mask-friendly in recent days, wouldn’t say whether the federal properies in Washington, D.C. will follow the city’s lead in mandating mask-wearing outside in an effort to stop the spread of the coronavirus.

‘We’re going to make a decision over the next 24 hours,’ Trump replied instead. ‘We’ll let you know what that decision is.’

Trump made the comments at his Wednesday coronavirus briefing – his second in two days – where he boasted that the Mexican border wall was keeping coronavirus out and claimed GOP ‘sun belt’ governors were doing a ‘good job.’

President Donald Trump wouldn’t say whether federal properties would follow the lead of Washington, D.C. during his press briefing Wednesday. He did tout his U.S.-Mexico border wall for keeping Americans safe from the virus 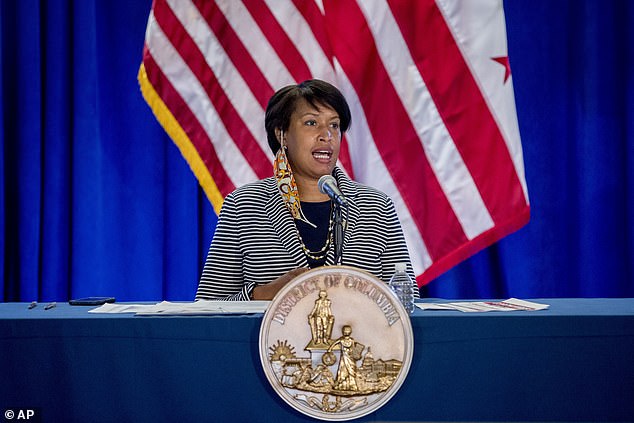 Washington, D.C. Mayor Muriel Bowser, photographed during a briefing Monday, announced new mask guidelines on Wednesday, though she doesn’t have power to make people wear masks on federal properties, like the White House, within the city limits

He then pointed to hotspots Arizona, Texas, Florida and California.

Only California has a Democratic governor.

‘There are likely a number of causes for the spike in infections. Cases started to rise among young Americans shortly after demonstrations, which you know very well out,’ Trump put at the top of his list.

He also mentioned the relaxing of mitigation measures, the summer holidays, an uptick in travel and people gathering at bars and ‘maybe beaches.’

He said the border wall was having a ‘great positive impact’ of not letting people in.

‘Two hundred and fifty-seven miles of newly constructed wall along the southern border has had a great positive impact on people coming in,’ Trump said.  ‘And we have record low numbers of people coming in illegally.’

‘It was really meant for a different purpose but it worked out very well for what we’re doing right now and for the pandemic,’ the president added.

D.C.’s Mayor Muriel Bowser was dealing with the city’s steady uptick in COVID-19 cases Wednesday by firming up the city’s mask policy telling residents of the capital that they must wear masks when they leave their homes.

She outlined some exceptions to the rule including for young children, if people are actively eating or drinking, or in an enclosed space, or if they’re vigorously exercising and able to stay six feet away from others. 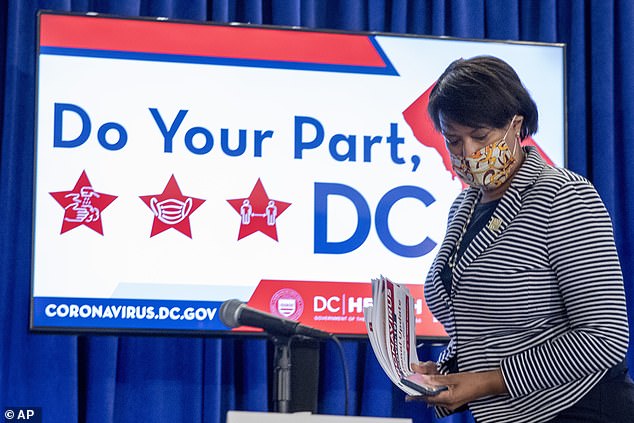 Washington, D.C.’s Mayor Muriel Bowser wears a mask as she arrives to a press conference Monday. The D.C. mayor announced updated mask guidelines Wednesday to respond to an uptick in COVID-19 cases in the capital city

At Trump’s briefing, he again pulled a mask out of his pocket to promote mask-wearing, though was seen out in Washington Monday night at his Trump International Hotel sans cover-up.

The president and Bowser haven’t seen eye-to-eye in recent weeks.

Things were especially fraught after ‘Black Lives Matter’ protesters were teargassed in front of the White House on June 1, directly before Trump emerged to walk across Lafayette park to hold up a Bible in front of St. John’s church, which had been vandalized.

Bowser ordered ‘Black Lives Matter’ painted on 16th Street in front of the White House the next morning.

The D.C. mayor has no power to enforce mask-wearing at federal properties, like the White House.