A photo showing a ‘mouthwatering’ steak dish at Trump Tower in Chicago has been well and truly skewered and roasted by Twitter users who have been gagging over a picture that was posted by the hotel.

The dish is served on a slate plate with a randomly strewn assortment of vegetables and costs $36.

‘Our prime hanger steak served with romesco, roasted cauliflower and mustard jus is absolutely mouthwatering,’ wrote the hotel on Instagram, but the Internet had other ideas.

‘The piece of steak on the lower right hand corner looks like a festering wound,’ tweeted one disgusted user while another said, ‘This looks like table scraps’.

‘Looks like it’s been eaten once already,’ said another person. ‘I’ve had better looking projectile vomit’, said another.

One person declared it to be ‘an idiot’s version of haute cuisine,’ while another comedian said ‘It looks like a collage of a mishmash of culinary covfefe,’ referring to one of the President’s famously misspelled tweets.

Chris Booty added, ‘Even the bloody cauliflower has been spray-tanned.’

The photo first emerged on Instagram and was then shared by Trump Hotels earlier this week. 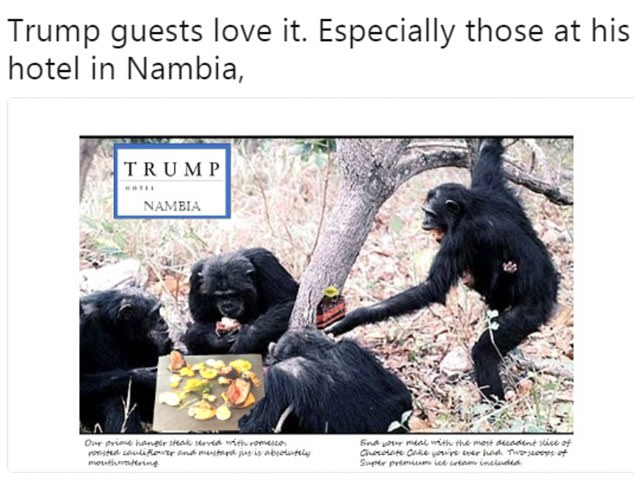 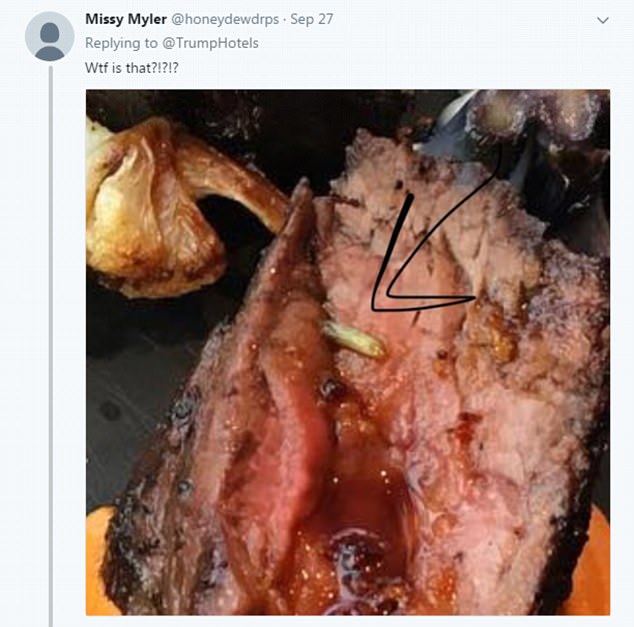 Others quickly picked apart the steak even more than it already had been, complaining about its look and texture

‘Our prime hanger steak served with romesco, roasted cauliflower and mustard jus is absolutely mouthwatering,’ the hotel tweeted, along with the picture of the meal.

The criticism of the dish, that is being served at Sixteen, a Michelin two-starred restaurant at the Trump Hotel Chicago, came thick and fast.

‘Just pick it up and get it back on the plate. Customer will never know,’ wrote another.

Frank D’Elia added, ‘An idiot’s version of haute cuisine cooked by the graduates of the Trump School of Culinary Arts.’

‘Looked tired. Even the roasted cauliflower had an ‘I’ve had it’ look’ said another. 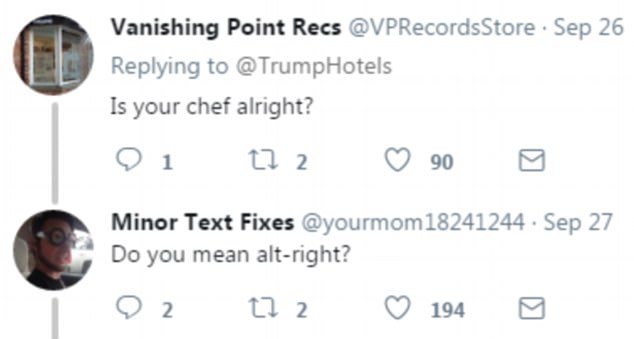 So far there has been no response at all from the hotel or the restaurant, however a number of Twitter users are hoping that celebrity chef Gordon Ramsey may well give his opinion.

‘Gordon Ramsey we need to know your thoughts!’ wrote one user while another said ‘Inquiring mind want to know’