Despite tweets protesting otherwise, President Trump is having trouble recruiting lawyers to his legal team navigating the Russia probe, with it currently functioning as a one-man show.

The president tried to recruit Theodore Olson without success, and met with veteran lawyer Emmet Flood, who the president didn’t like because he had defended President Clinton.

President Trump (right) only has one lawyer working full-time on defending him in the Mueller probe, that of Jay Sekulow (left) 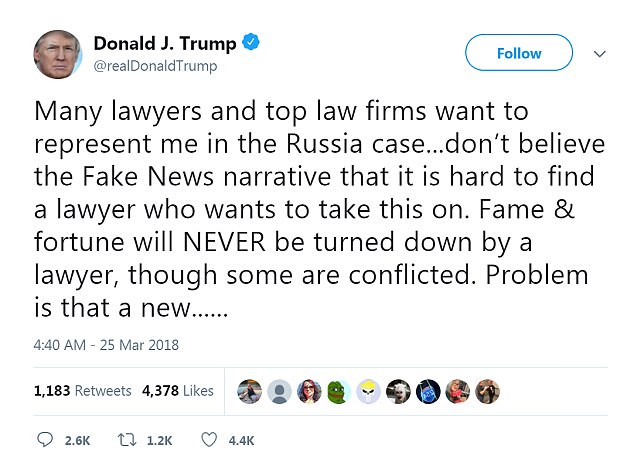 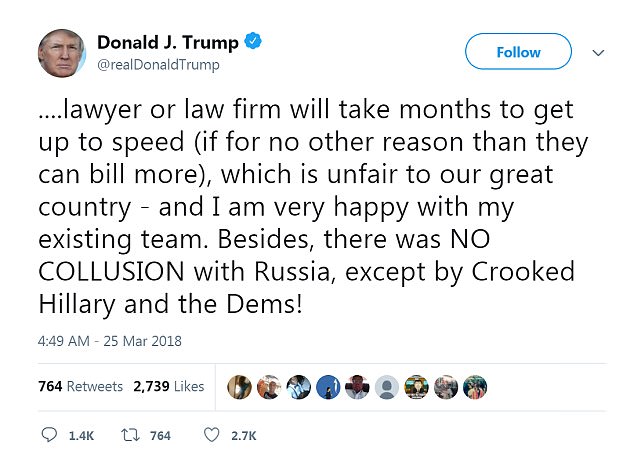 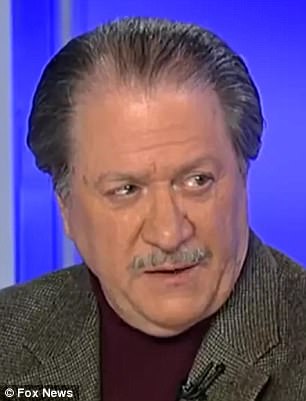 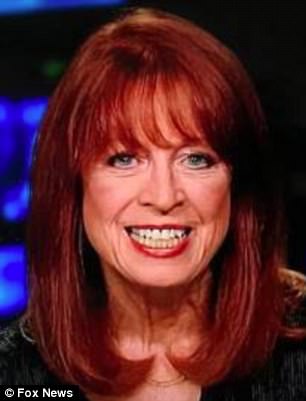 Attorneys Joe diGenova (left) and Victoria Toensing (right) had been announced as hires for the president’s legal team dealing with the Mueller probe. On Sunday, another attorney for the president told the New York Times that they had ‘conflicts’ preventing that from happening

And while lawyer William A. Burck is working for former Chief of Staff Reince Priebus, ex-Chief Strategist Steve Bannon and White Counsel Don McGahn, he wouldn’t take the president’s case, the Times reported.

On Sunday, the president put out a nothing-to-see-here tweet, suggesting he was having no problem finding legal representation.

‘Many lawyers and top law firms want to represent me in the Russia case…don’t believe the Fake News narrative that it is hard to find a lawyer who wants to take this on,’ Trump wrote.

‘Fame & fortune will NEVER be turned down by a lawyer, though some are conflicted,’ the president continued.

The president said the problem is that a ‘new lawyer or law firm will take months to get up to speed (if for no other reason than they can bill more), which is unfair to our great country.’

And he said he was ‘happy with my existing team.’

A short time after, Sekulow put out a statement saying the two new hires wouldn’t actually be doing work on the Russia probe.

‘The president is disappointed that conflicts prevent Joe diGenova and Victoria Toensing from joining the president’s special counsel legal team,’ Jay Sekulow said in a statement Sunday to the Times.

Sekulow said that the two lawyers, who are a married couple, would still be able to assist the president with matters outside the Russia probe and so ‘the president looks forward to working with them.’

Now it’s down to Sekulow and Ty Cobb, who’s working within the White House, dealing with Mueller’s demands.

Dowd had been working on negotiating with Mueller on the scope and terms of an interview with the president.

Dowd’s decision to resign, according to the Times, came after Trump signaled he planned to ignore the lawyer’s advice and sit down for an interview with investigators.

Dowd had deemed the decision as too risky.

The choice of diGenova also seemed risky as he had floated conspiracy theories on the Fox News Channel that the FBI and the Department of Justice had framed the president on the Russia matter.

Meanwhile, Trump again publicly said he wished to sit down with Mueller, telling reporters at the White House ‘I would like to’ when asked whether he would meet with the special counsel.

It’s this attitude that has made working for the president such a tough sell among top legal talent.

The turmoil among Trump’s legal team started early on, the Times reported, with the president’s longtime personal attorney Marc Kasowitz recommending that Trump handle the Mueller probe like Clinton did – with an outside legal and communications team handling all aspects of the inquiry.

But Trump didn’t like the idea, nor did he manage the two teams well, and so the Mueller team and the White House were often not on the same page.

Kasowitz also wished to deal with Mueller in an adversarial way, an approach Trump’s son-in-law Jared Kushner disagreed with, the Times wrote.

Kasowitz was out the door in July.

Next up came Cobb, and then Dowd, who both urged cooperation.

Cobb handled the first phase of the inquiry, which was the turning over of documents.

He then passed the baton to Dowd, who was dealing with the second phase of the Mueller inquiry, an interview with the president.

The president has been insistent about sitting down with Mueller, believing that if he testifies under oath, it will improve his chances of being cleared.