Trump’s critics have seized on new leaked cables from the ex British Ambassador to the US, whose scathing assessment of the president sparked a major diplomatic row.

Kim Darroch believed Trump pulled out of the Iranian nuclear deal because it was associated with his predecessor Barack Obama, and described the move as ‘diplomatic vandalism,’ explosive leaked documents showed on Saturday.

Bruce Heyman, a former US Ambassador to Canada, subsequently doubled down on Darroch’s criticisms, calling it ‘the most accurate assessment’ of Trump’s diplomatic strategy, in a damning broadside made on twitter in the late hours of Saturday night.

‘The administration is set upon an act of diplomatic vandalism, seemingly for ideological and personality reasons – it was Obama’s deal,’ ambassador Darroch wrote in a diplomatic cable in May 2018.

Bruce Heyman, a former US Ambassador to Canada, doubled down on Darroch’s criticism, calling it ‘the most accurate assessment’ of the strategy, in a damning broadside against the president, made on twitter on Saturday night 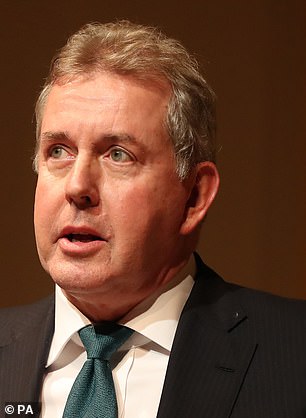 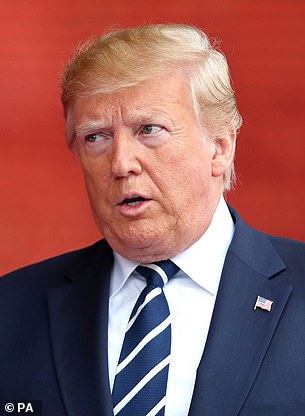 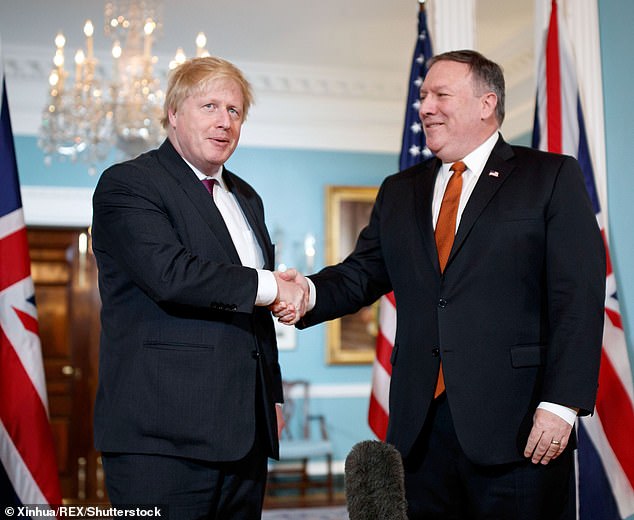 Despite vigorously shaking hands with US Secretary Mike Pompeo and giving a thumbs-up to cameras, Mr Johnson was unable to change the US president’s mind

The cable was included in a second batch of leaked reports published by the Mail on Sunday newspaper, the first of which caused Darroch to resign earlier this week.

In May 2018, Britain’s then-foreign minister Boris Johnson went to Washington to try to persuade Trump not to abandon the Iran deal.

In a cable sent afterwards, Darroch indicated there were divisions in Trump’s team over the decision, and criticised the White House for a lack of long-term strategy.

‘They can’t articulate any ‘day-after’ strategy; and contacts with State Department this morning suggest no sort of plan for reaching out to partners and allies, whether in Europe or the region,’ Darroch wrote.

He reported back that Secretary of State Mike Pompeo, during his talks with Johnson, ‘did some subtle distancing by talking throughout about ‘the President’s decision”. 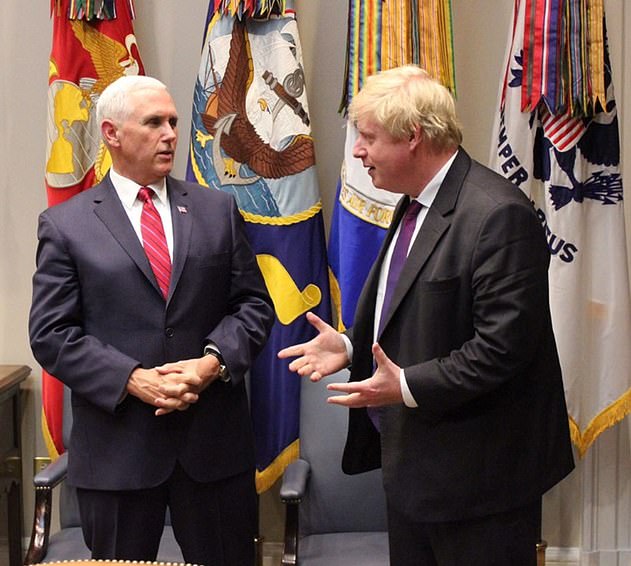 Boris Johnson did not meet President Trump himself on the trip to try and save the Iran nuclear deal that Darroch describes. But he did meet Vice President Mike Pence, pictured. Sir Kim says it was clear the president’s advisers had differing opinions

The newspaper reported that, according to Darroch, Pompeo also hinted that he had tried but failed to ‘sell’ a revised text to Trump.

This newspaper’s cache of leaked memos from Sir Kim dominated headlines on both sides of the Atlantic last week, after Trump reacted furiously to Sir Kim describing the White House as a ‘uniquely dysfunctional environment’ and ‘diplomatically clumsy and inept’.

The President called Sir Kim a ‘pompous fool’ and declared that he would no longer deal with him. 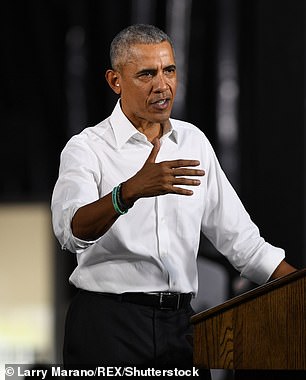 At the same time, Assistant Commissioner Neil Basu issued a warning that any further publication of the cables could constitute a criminal offence and called on journalists to return any leaked government documents.

His comments were roundly condemned by politicians and senior journalists, who accused the Met of the kind of ‘heavy-handed’ approach more usually associated with totalitarian regimes.

In a further statement on Saturday, Mr Basu insisted the Met had ‘no intention’ of trying to prevent the publication of stories in the public interest.

He said the focus of the inquiry by the counter terrorism command – which investigates breaches of the OSA – was ‘clearly on identifying who was responsible for the leak’.

However, he said they had been advised any further publication of the cables ‘now knowing they may be a breach of the OSA’ could also constitute a criminal offence – to which there was no public interest defence.

‘We know these documents and potentially others remain in circulation. We have a duty to prevent as well as detect crime, and the previous statement was intended to alert to the risk of breaching the OSA,’ he said. 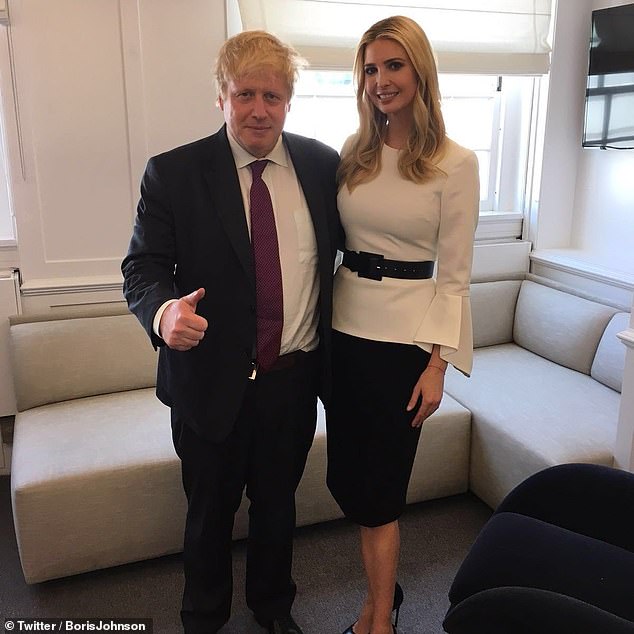 Boris Johnson, pictured with Ivanka Trump on the doomed 2018 trip to persuade Donald Trump not to abandon the Iran deal

In a statement, a spokesman for The Mail on Sunday said it was publishing the latest leaked details – despite the threat of prosecution – because ‘a free press is vital to our democracy’.

‘The media must be free to publish such information, in the public interest, as long as it does not endanger lives or national security,’ the spokesman said.

‘Our readers across the globe now have important information about how Britain tried, but failed, to stop President Trump abandoning the Iran nuclear deal.

‘What could be more in the public interest than a better understanding of how this position was reached, which may have serious consequences for world peace?’

In response to the latest leak, a Foreign Office spokesman said: ‘A police inquiry into the totally unacceptable leak of this sensitive material has begun. The perpetrator should face the consequences of their actions.

‘It’s not news that the US and UK differ in how to ensure Iran is never able to acquire a nuclear weapon; but this does underline that we do not shy away from talking about our differences and working together.’