A report that President Donald Trump asked Homeland Security and national security officials if the US could use nuclear bombs to disrupt hurricanes – and his subsequent denial he said this – has put a spotlight on where he might have found inspiration for the theory.

What’s clear is that Trump’s purported proposal is not new.

It first emerged in 1935 after a hurricane ravaged the Florida Keys, the Washington Post reported.

A group of chamber of commerce executives from across the state came up with the suggestion that the government bomb storms before they made landfall.

Donald Trump on Monday blasted a report that he asked if nuclear bombs can be used to stop hurricanes as ‘fake news,’ adding ‘I never said this’

‘These storms are not only local menaces,’ Clyde Elliot, the secretary of the Hollywood chamber of commerce said.

‘They reach Newfoundland frequently before they disburse, hence this control is really of national importance.’

While it did not gain any traction at the time, the proposal resurfaced in 1945 after the US dropped the first atomic bombs on Hiroshima and Nagasaki.

President Harry S. Truman received a letter from Herbert A. Frink, the mayor of Miami Beach, urging him to consider the idea to protect beachfront residences in Florida from the destructive storms.

Floridians even offered the government a 7,500-acre tract that could be used as a launchpad.

They were inspired by reports that when the atomic bomb was tested in the New Mexico desert, nearby storm clouds had disappeared.

But scientists promptly dismissed this, pointing out that there was no evidence that the two events were linked and warning that exploding a bomb in a hurricane could even make it worse.

The idea popped up again in the 1950s during the Korean War, but the US Weather Bureau – the predecessor of the National Weather Service – warned that ‘this is no time to waste bombs on hurricanes’. 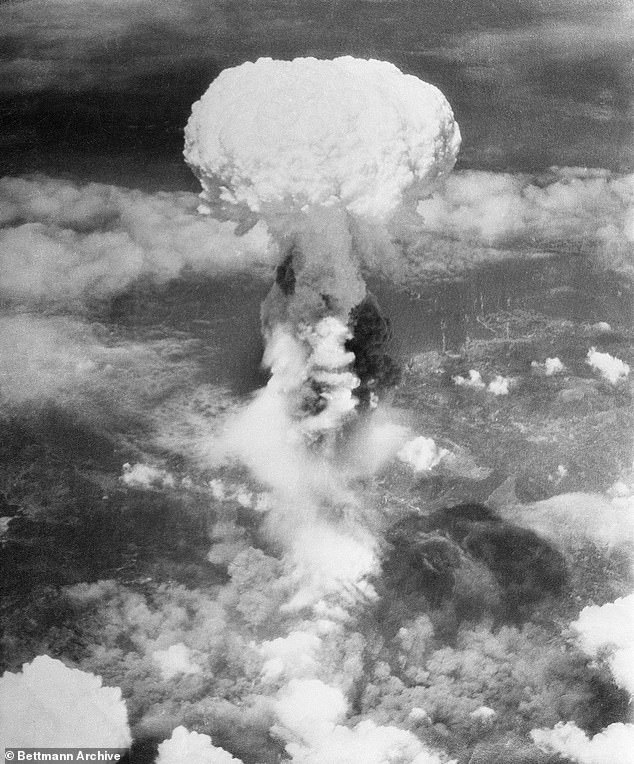 After dropping an atomic bomb on Nagasaki, Japan, in 1945, the US government began considering the idea of using this energy as a hurricane killer

‘The real problem facing us today is not ways to eliminate hurricanes, but instead the job of educating people to take full precautionary measures when a storm occurs,’ its chief forecaster Grady Norton said.

But that didn’t put off the US government, which began to pay serious attention to the idea of nuking hurricanes towards the end of the decade when meteorologist Jack Reed argued that the huge amount of air lofted skyward by a bomb could lift the warm air fueling a hurricane into the stratosphere.

Reed speculated that this could weaken or slow down a storm.

The government’s interest was revealed when the head of the US Weather Bureau said in 1961 that the agency planned to study whether hurling a bomb into a hurricane could stop it, according to the Washington Post. 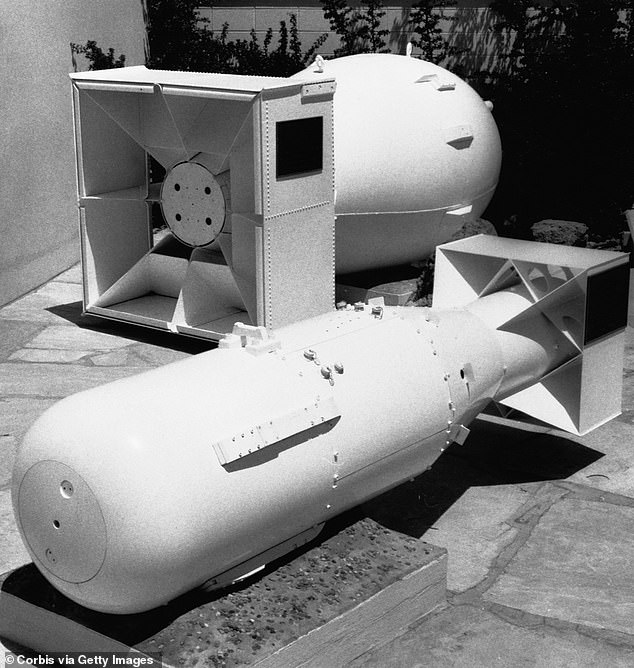 Replicas of two atomic bombs, ‘Little Boy’ and ‘Fat Man.’ The original bombs were dropped on Hiroshima and Nagasaki. Ever since, the idea of using bombs to attack hurricanes has repeatedly resurfaced

Francis Reichelderfer said he could ‘imagine the possibility someday of exploding a nuclear bomb on a hurricane far at sea.’

He said nuclear weapons ‘might do something to a hurricane, but he wasn’t sure if it would be good or bad,’ the Associated Press reported.

But the meteorologist said there were still major obstacles, including the millions of dollars the tests would cost, and that the agency still had to study potential side effects and wouldn’t acquire its own nuclear arsenal ‘until we know what we’re doing’.

Although those concerns prevailed, the idea of bombing mother nature into submission still resurfaces frequently. 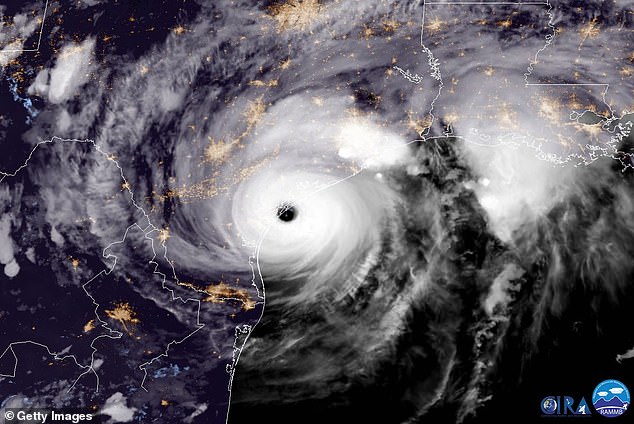 A satellite image shows Hurricane Harvey making landfall in August 2017 on the Texas coast. The storm caused $125 billion in damage

‘These storms infuriate me. There must be something that can be done. It’s like a war. This state looks like Iraq,’ she reportedly said.

In 2016, National Geographic reported that government agencies have been receiving inquiries about preemptively attacking hurricanes with nuclear weapons for decades.

Although scientists have repeatedly warned of combining a hurricane’s powerful force with deadly nuclear fallout, the theory is popular enough that the government’s own National Oceanic & Atmospheric Administration has had to create a whole FAQ about it under the ‘Tropical Cyclones Myths’ category.

As the NOAA points out, dropping a nuclear bomb on a hurricane is ‘not a good idea’ seeing as how ‘this might not even alter the storm.’

But, more importantly, the organization says that ‘the released radioactive fallout would fairly quickly move with the tradewinds to affect land areas and cause devastating environmental problems.’

The NOAA also notes that modifying hurricanes with explosives would require a bewildering amount of energy.

‘A fully developed hurricane can release heat energy at a rate of 5 to 20×1013 watts and converts less than 10 percent of the heat into the mechanical energy of the wind,’ it says. 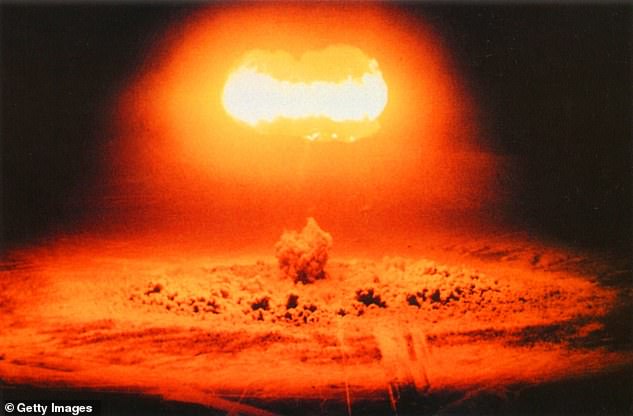 ‘The heat release is equivalent to a 10-megaton nuclear bomb exploding every 20 minutes. According to the 1993 World Almanac, the entire human race used energy at a rate of 1013 watts in 1990, a rate less than 20 percent of the power of a hurricane.’

Climate analyst and meteorologist Ryan Maue also tweeted on Sunday that ‘detonating a nuclear bomb inside a hurricane would do nothing to disrupt the storm. Instead, you now have a radioactive hurricane.’

‘You cannot nuke a hurricane for obvious reasons. The resulting shockwaves could reverberate into space, shatter the Phantom Zone and release galactic criminals into our atmosphere who may then try to invade Earth. I can’t believe this is even a discussion,’ joked writer and director Edgar Wright on Twitter.

Today, if Trump did ever consider the idea, he might run afoul of the Peaceful Nuclear Explosions Treaty, which the United States and the former Soviet Union ratified in 1990 and which limits the yield of weapons for non-military purposes to 150 kilotons.

Trump has had to deal with several hurricanes during his tenure.

Hurricane Maria devastated Puerto Rico in October 2017 and Trump is still dealing with the fallout there as officials on the island complain he has not done enough to help their recovery.

It cause $91.6 billion in damage to the Caribbean.

In August 2017, Hurricane Harvey made landfall in Texas and caused $125 billion in damage.

Harvey was the first major hurricane to hit the U.S. mainland since 2005.

In September of that year, Hurricane Irma caused more than $50 billion damage in Florida. 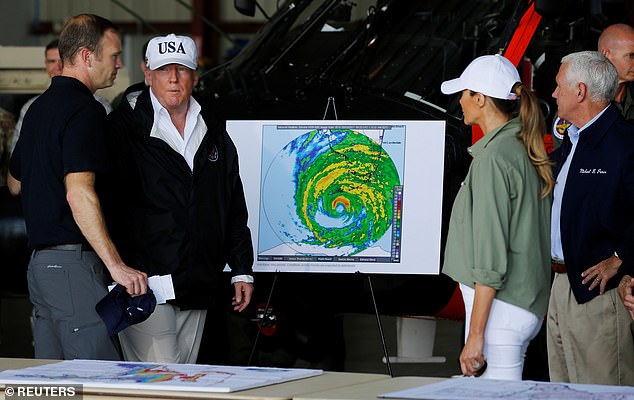