The percentage of TSA airport screeners missing work has hit 10 percent as the partial government shutdown stretches into its fifth week.

The Transportation Security Administration said Monday that Sunday’s absence rate compared to 3.1 percent on the comparable Sunday a year ago.

The workers who screen passengers and their bags face missing another paycheck if the shutdown doesn’t end early this week.

According to TSA, many of them say the financial hardship is preventing them from reporting to work.

TSA says the national average waiting time in airport checkpoint lines is within the normal limit of 30 minutes, but there are longer lines at some airports. 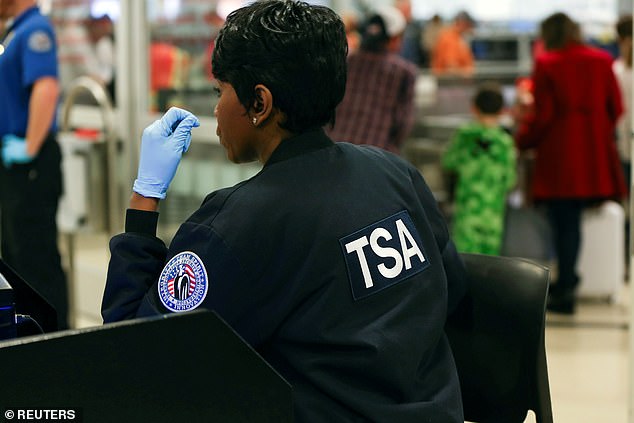 The percentage of TSA airport screeners missing work has hit 10 percent as the partial government shutdown stretches into its fifth week. A TSA agent above is seen screening passengers at Hartsfield-Jackson Atlanta International Airport on Friday

The agency has dispatched extra screeners to airports in Atlanta, LaGuardia Airport in New York, and Newark, New Jersey.

A TSA spokesman said other airports might also be getting additional help.

That topped the previous high of 8 percent on Saturday.

With fewer screeners, TSA closed one of its security checkpoints at Baltimore/Washington airport over the weekend, reopened it, but closed it again Monday afternoon, according to an airport spokeswoman.

An airport spokesman said lines were relatively short at the other six checkpoints.

TSA appeared to be managing the high sick-out rate as well as could be expected.

The agency said that on Sunday it screened 1.78 million passengers, and only 6.9 percent – roughly 120,000 people – had to wait 15 minutes or longer to get through security.

No figures were yet available for Monday, but websites or spokespeople for several major airports including Dallas-Fort Worth and Chicago’s O’Hare reported normal security lines and few problems. 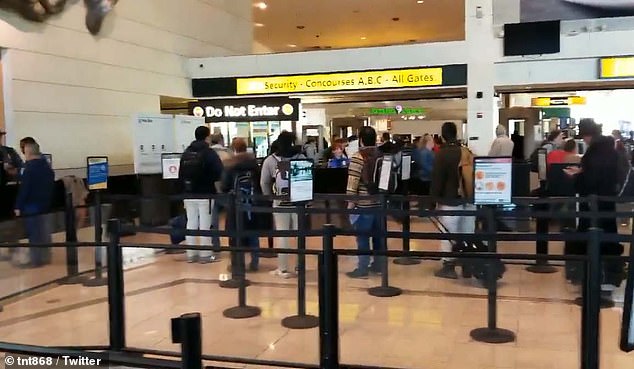 With fewer screeners, TSA closed one of its security checkpoints at Baltimore/Washington airport (aboe) over the weekend, reopened it, but closed it again Monday afternoon, according to an airport spokeswoman

Hartsfield-Jackson Atlanta International Airport, which had some of the longest lines in the country last week, reported waits of 15 to 30 minutes at domestic-travel checkpoints Monday.

TSA got a break from bad weather: Storms in the Midwest and Northeast led airlines to cancel more than 4,400 flights over the three-day weekend, which reduced the number of passengers to screen.

A few airports – San Francisco’s being the largest – conduct screening with government-approved private contractors, not TSA.

A long government shutdown and more TSA sick-outs could lead other airports to consider going private, although that hasn’t happened yet.

The holiday honoring Martin Luther King Jr. is not as busy for travel as many other three-day weekends.

However, inconvenience could become a crisis for the travel industry the longer the shutdown lasts – and there are few signs of movement by President Donald Trump or congressional Democrats to break the stalemate over border-wall spending that is causing the shutdown.

‘Presidents’ Day weekend is much bigger, and then spring break and Easter – those are really important,’ said Savanthi Syth, an airline analyst for Raymond James.

Presidents’ Day is Feb. 18, and Syth said if the shutdown drags into next month it could cause some passengers to cancel travel plans.