Some areas of the east coast of Australia could have just three hours to evacuate in the event of a catastrophic tsunami, researchers have said.

Modelling conducted by scientists from Queensland’s Environment Department showed that parts of the state could be devastated  in three to 17 hours after an alert had been sent.

Researchers also found that if a wave was to hit the northern tip of the state, it would only be four hours before parts of the mainland was submerged.

Modelling by Queensland’s Environment Department reveal that in the case of a tsunami, some areas of Queensland state could be devastated in just three hours (file image)

Queensland regions at the highest tsunami risk in order:

Using computer generated tests, scientists were able to see that tsunamis in the Vanuatu area would hit Queensland’s coast the quickest.

‘We picked scenarios that are very rare and unlikely to occur but would expect to produce a result that we could get some conclusions out of,’ Department of Environment hydraulic engineer, Paul Boswood told the ABC.

Mr Boswood said the tides also had a large impact into the potential destruction of a tsunami along Queensland’s coast.

‘We looked at different stages of tide because of course the tide plays a part as well. When you’re looking at tsunamis of only 1 metre high and you’ve got tides of 2 metres, it has an impact,’ he said.

Researchers said the Great Barrier Reef may prevent some destruction from a tsunami, but more exposed areas like the Gold Coast and Sunshine Coast could suffer the most. 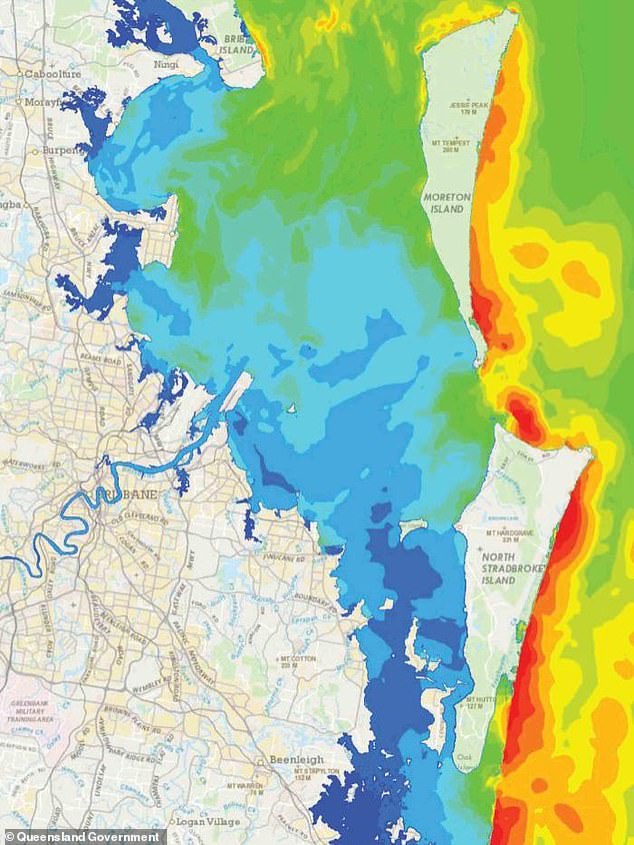 Test reveal that areas like Moreton Bay in southeast Queensland could receive significant damage with waves up to ten metres. (pictured model of Moreton Bay in a tsunami with red areas indicating the highest waves)

The modelling also showed that Moreton Bay, in southeast Queensland, could receive significant damage in the unlikely event of a tsunami.

The waves in this area could reach up to ten metres and currents could move at 8 metres per second if flooding was to occur.

Noosa and Maroochydore were found to be the most high risk areas along the Sunshine Coast.

The report said these communities would be relatively safe if a tsunami was to hit, as long as they were away from beaches and waterways.

Fraser Island was also expected to take a blow with models showing waves up to seven metres and currents moving at nine metres per second. 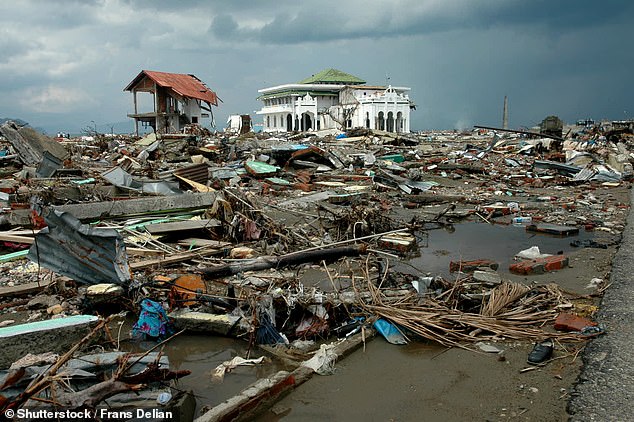 The Gold Coast and Sunshine Coast were expected to suffer greatly and reports said after the first wave hit, it would only be an hour before the mainland was submerged (file image)