Commuters have branded the tube a ‘suicide mission’ as workers cram onto the carriages this morning with few masks in sight and no social distancing.

Thousands of people waited this morning for buses and tubes in the capital after the Prime Minister’s speech on Sunday urging people to return to work if they can do so safely.

The guidance also suggested that Londoners should carry hand sanitiser, and that the tube will only be able to carry 13 – 15 per cent of passengers.

However commuters have criticised the London Mayor for the lack of social distancing in place, and have also railed against the amount of tubes running – leading to overcrowding.

Twitter user Adeleye said: @BorisJohnson @SadiqKhan commute this morning is like a suicide mission, no social distancing, all cramped coaches on tubes, yet you still say stay alert, control the virus.’ 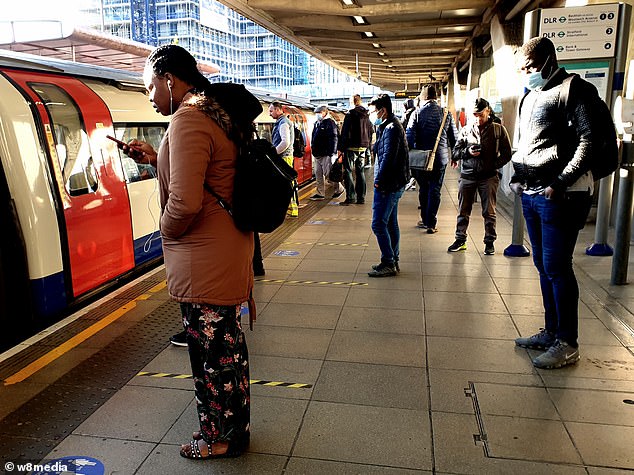 A busy London Underground train as more people start heading back to work. There is a looming clash between the government and trade unions over safety measures 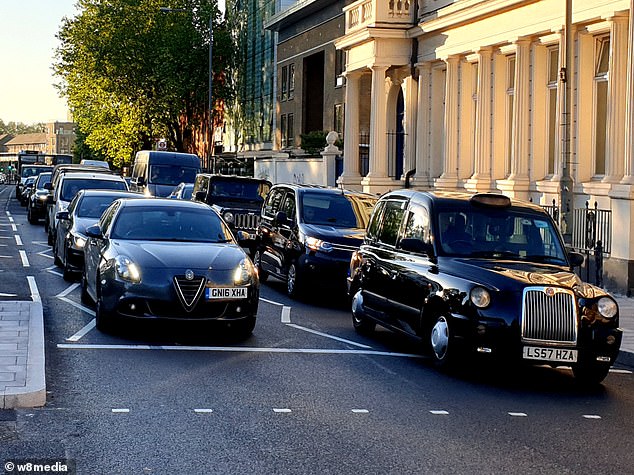 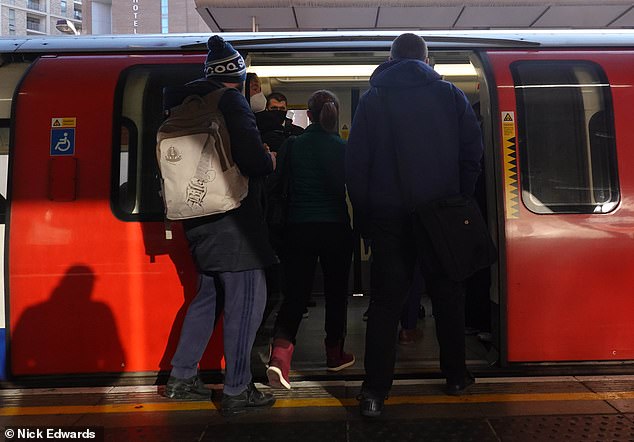 Passengers cram onto the tube this morning at Canning Town, with very little social distancing in place

And Terry McCarthy posted a picture of a packed tube and said: ‘And they try to tell us the tube is at 5 per cent capacity! This is dangerous and putting lives at risk.’

It comes as thousands of lower income Londoners are forced onto packed trains by the unions’ refusal to put on more trains while Labour Mayor Sadiq Khan insists that London is still locked down despite Mr Johnson’s exit plan.

Publishing his initial plan for the capital yesterday, the Mr Khan said the intention was to keep passenger numbers low on the tube and buses by encouraging people to travel by other means.

The guidance said: ‘The plan will require significant changes to the way in which people travel in London.

‘TfL has been able to operate up to 60 per cent of Tube services and more than 80 per cent of bus services during the crisis to support essential journeys. 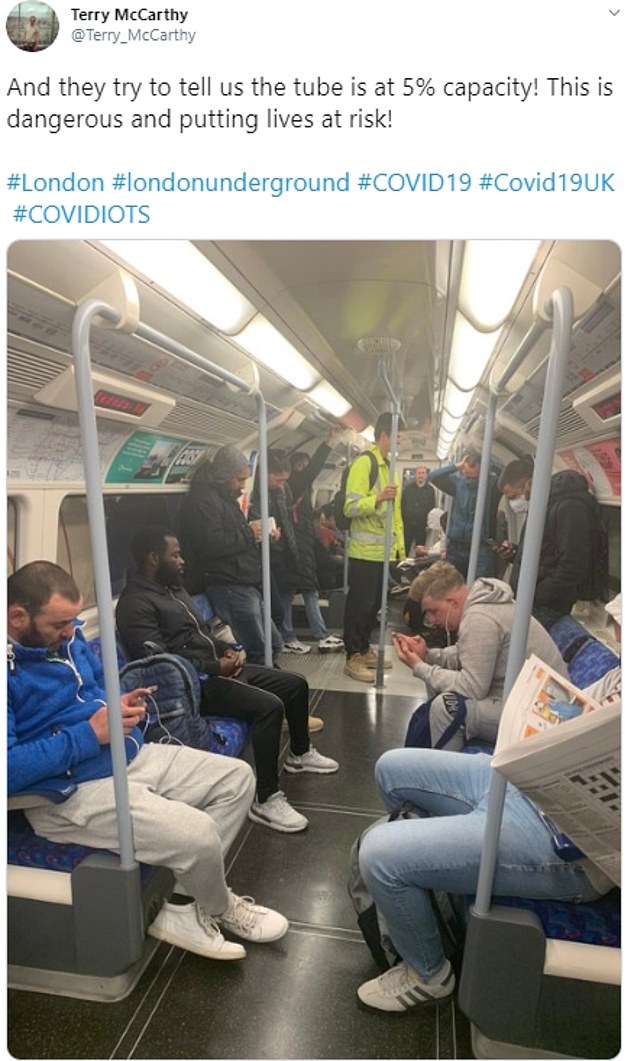 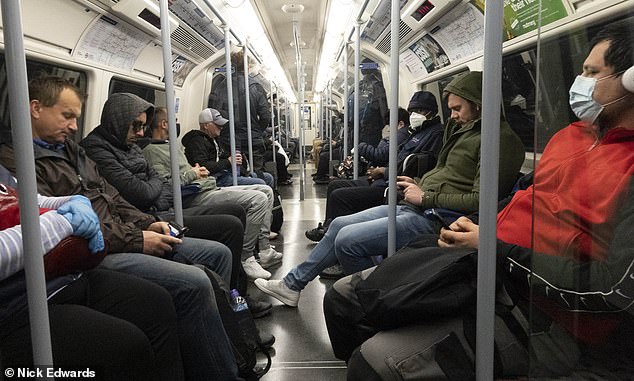 ‘This is while managing the impact of the virus on the transport workforce with staff ill, shielding or self-isolating.’

The London Underground will restore the Circle Line and reopen some of the 37 stations that have been closed for weeks.

The guidance added: ‘The national requirement to maintain 2m social distancing wherever possible means that TfL will only be able to carry around 13-15 per cent of the normal number of passengers on the Tube and bus networks even when 100 per cent of services are operating once again over time.

‘Transport providers, borough councils, schools, businesses and Londoners all have a vital role to play over the coming weeks, working with Government to meet a travel demand challenge that far outstrips the challenge experienced during the 2012 Olympic games.’ 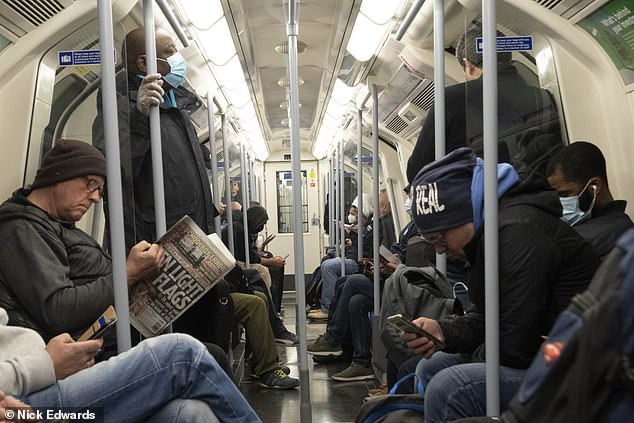 Commuters, some wearing masks, on the tube this morning at Canning Town station 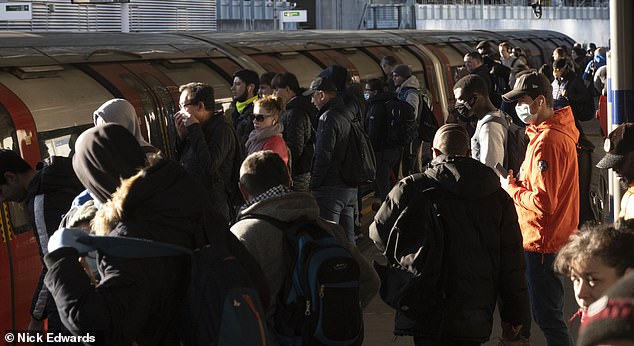 Hundreds of passengers at Canning Town, some with masks, travel on the tube this morning

Traffic in the capital has jumped by 3 per cent compared to last week.

The latest data from TomTom shows that last week’s congestion in London was at 16 per cent.

And today it is at 19 per cent, reflecting Boris Johnson’s message on Sunday that people should return to work if they can do so safely.

A similar pattern could be seen in other major cities.

In Manchester traffic is up from 15 per to 17 per cent compared to the previous week.

And in Liverpool in has risen by 1 per cent from 16 to 17 per cent, compared to the previous week

The battle over the future of transport is also playing out against a wider clash between the private sector – with just 13 per cent union membership – and the government as it tries to get back to work.

The public sector has 77 per cent union membership and has not seen its employees furloughed, while private sector workers take pay-cuts or face looming unemployment if their employers don’t get back to business.

The Rail, Maritime and Transport union (RMT) also advised its members not to work if they felt unsafe, amid fears over a surge in passengers on the railways and Tubes.

And assistant secretary general Mike Lynch told Bloomberg that strike action is now a possibility if passenger numbers surge in the week.

He said:  ‘Maybe today won’t be the big upsurge but if companies get the message that they should encourage their workers to come back, they will be contacting people today and tomorrow and by the end of the week we could have a big upsurge in numbers.

‘We will review that and if necessary, we are still able to ballot people if they are in unsafe conditions, and strike action is a possibility. We would rather have discussions on a controlled system with a national plan, about getting the country back to work when its safe. In the absence of that we may have to consider our position.’

Transport for London has slashed Tube and bus services to 15 per cent and 12 per cent respectively compared with normal levels – and closed 40 stations.

Public transport services have been decimated by a collapse in demand and staff shortages. Passengers are still being urged not to use trains and buses.