Tube passengers are automatically heat-scanned for knives, guns and bombs

Tube passengers are automatically heat-scanned for knives, guns and bombs as they go through ticket barriers in new bid to cut violence

Tube passengers in London are being automatically heat-scanned for knives, guns and bombs before boarding the Underground.

As passengers go through ticket barriers they will pass Thruvision scanners which have been introduced to cut violence.

The Home Office–funded five-day trial is taking place at Stratford station in east London which is home to two underground lines as well as Overground services and other national rail routes.

British Transport Police is using the new scanners to reveal objects hidden inside clothing that would usually block body heat. 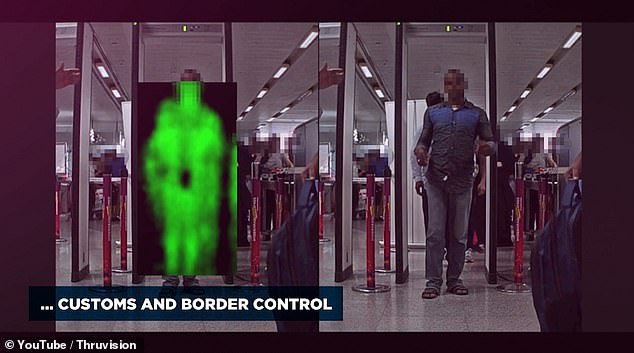 The sensitive cameras screen 2,000 passengers an hour, the officers will then be able to see the shape size and location of guns or blades.

The Thruvision technology is able to scan commuters up to 30ft away as they enter ticket barriers or ride the escalator.

The technology means that it does not require officers to do a physical search on potential suspects. 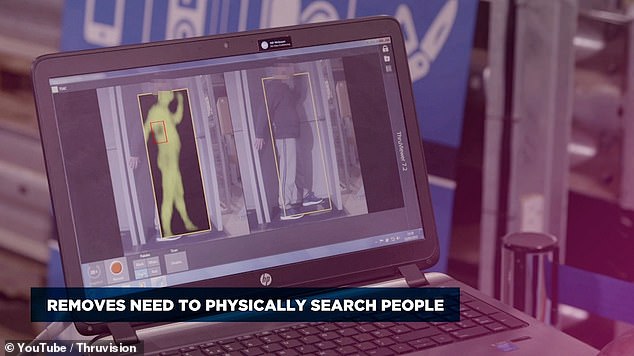 A person’s body emits heat which isn’t visible to the human eye but can be picked up by the scanner.

The heat is detected by using ‘passive terahertz technology’ and once a person has passed through it a video picture is shown in a different colour.

This blocks out the identity of the person, but shows up any weapons or stolen goods they may be carrying.

The concealed objects block body heat, which is how Thruvision is able to detect it.

It is safe and non-intrusive, meaning that identifying factors such as ethnicity will not show up in the scan.

The Home Office has spent around £40,000 on the scheme which is being used by British Transport and Metropolitan Police officers.

Once the trial is in full swing, the Home Office will also seek to identify how officers will be able to use the technology to see which individuals are carrying a knife, which could reduce controversial stop and search methods.

The scanner do not show body parts and ethnicity is not visible through the technology.

The system is already fully operation in the US and is being used on the Metro in Los Angeles.

Policing minister Kit Malthouse said: ‘We are pulling out all the stops in a battle against knife crime, in London and across the country.

‘Twenty thousand more police officers will help, but new technology can make an enormous impact on public safety, as this equipment shows. No one should feel they can walk the streets with a knife and expect to get away with it.’ 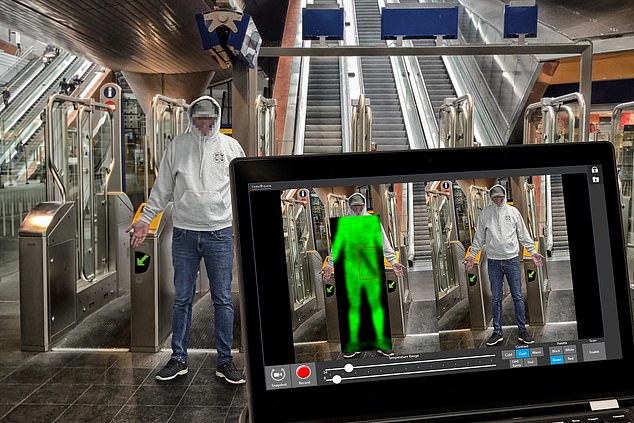 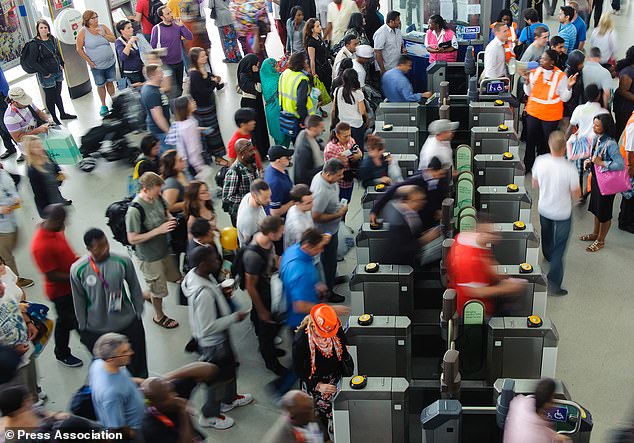 Detectives say the database will mean they can identify what kind of knife has been used in a stabbing, making it easier to catch criminals.

The method involves using state of the art CT scanning technology like that seen in hospitals, to create an image of the injury which can then be saved and stored.

Professor Mark Williams, from the University of Warwick’s Centre for imaging, Metrology, and Additive Technology is working with West Midlands Police to use the technology to crack crimes.

The latest technology in digital scanning and 3D printing has provided vital clues and evidence for 120 criminal cases – including murder.

Detective Chief Superintendent, Mark Payne, head of West Midlands Police CID, explained they were working with the university to build a better picture of knife wounds.

He said: ‘It will help us understand what type of knife has been used – so you will be able to paint an internal picture of the travel through the body of the knife

‘We are also doing experimentation on cadavers and of the impact of a knife as it travels through the body.

‘And previous pathological understanding of the hyoid bone was that it was fused together. Actually what we have been able to show now, but the study, is that is not always the case.

‘In support of the Home Office and other police forces, we are keen to explore how technology can assist us in tackling violent crime head on.’

This is while police across the country are adopting alternative methods in order to catch criminals.

West Midlands Police are now also using high tech scanners which are being used to create a ‘catalogue of knife wounds’.

The latest technology in digital scanning and 3D printing has provided vital clues and evidence for 120 criminal cases – including murder.

The method involves using state of the art CT scanning technology like that seen in hospitals, to create an image of the injury which can then be saved and stored.

The scope for the technology to be used in criminal investigations was discussed at the British Science Festival in Coventry and Warwickshire.

In November last year technology was also revealed which would also reveal hidden weapons under clothes.

The Argon weapon scanner scans passers-by for electromagnetic waves, operators of the technology will be able to see whether the person is in possession of guns or knives beneath their clothing.

Creators of the device have said it is able to ‘detect metallic and non-metallic concealed contraband’ as small as a matchbox.

Another scanner works by ‘directing a low-powered radar beam’ and ‘interpreting the signal’ reflected off the body to expose ‘hard objects’ such as suicide vests.

The same company was also responsible for the new US embassy as well as the design of the Home Office, which has fountains and planters in place to deter ram raiders.