The clips compiled and published Sunday by Media Matters For America were recorded back when Carlson was a regular commentator on the shock jock radio program ‘Bubba the Love Sponge’ between 2006 and 2011.

For about an hour each week, Carlson would call into the show and weigh in on current events, often sharing controversial opinions in vulgar terms.

He also frequently employed misogynistic language when talking about women, saying that they are ‘extremely primitive’ beings who ‘just need to be quiet and kind of do what you’re told’.

He specifically called Britney Spears and Paris Hilton ‘the biggest white whores in America’ and said he wanted to give ‘c***y’ TV host Alexis Stewart, daughter of Martha Stewart, ‘the spanking she so desperately needs’.

Carlson, who joined Fox News in 2009, responded to the report on Twitter Sunday night by saying he wouldn’t apologize.

‘Media Matters caught me saying something naughty on a radio show more than a decade ago,’ he wrote on Twitter.

‘Rather than express the usual ritual contrition, how about this: I’m on television every weeknight live for an hour. If you want to know what I think, you can watch. Anyone who disagrees with my views is welcome to come on and explain why.’

Unearthed radio clips have revealed a number of sexist, misogynistic and perverted remarks by Fox News anchor Tucker Carlson. Media Matters For America published a compilation of 27 transcripts from his weekly guest appearances on the shock jock radio program Bubba the Love Sponge between 2006 and 2011 on Sunday

The lengthy MMFA report contains 27 transcripts broken down into four sections: ‘Talking about underage girls and sex, and minimizing and defending statutory rape’, ‘Diminishing sexual violence/laughing about violence against women’, ‘Sexism against specific women’ and ‘Sexism against unnamed women’.

The conversations between Carlson, host Todd Clem (aka Bubba the Love Sponge) and an unnamed co-host are detailed below.

‘Talking about underage girls and sex, and minimizing and defending statutory rape’

The first transcript is pulled from an August 27, 2009, show during which Carlson, Clem and a co-host discuss underage marriage.

‘Look, just to make it absolutely clear, I am not defending underage marriage at all,’ Carlson prefaces before saying: ‘I just don’t think it’s the same thing exactly as pulling a child from a bus stop and sexually assaulting that child.

After Clem and the co-host express outrage at Carlson’s defense, he explains: ‘The rapist, in this case, has made a lifelong commitment to live and take care of the person, so it is a little different. I mean, let’s be honest about it.’

Carlson then says: ‘I got myself in a position that seem like I’m defending it, because I am against that.’

Months later on an October 25, 2009, show, the group talks about how Carlson’s 14-year-old daughter goes to boarding school.

Clem – who is against his children going to boarding school, describes a scenario in which underage girls experiment with each other sexually in their dormitory.

Carlson remarks: ‘If it weren’t my daughter I would love that scenario.’ 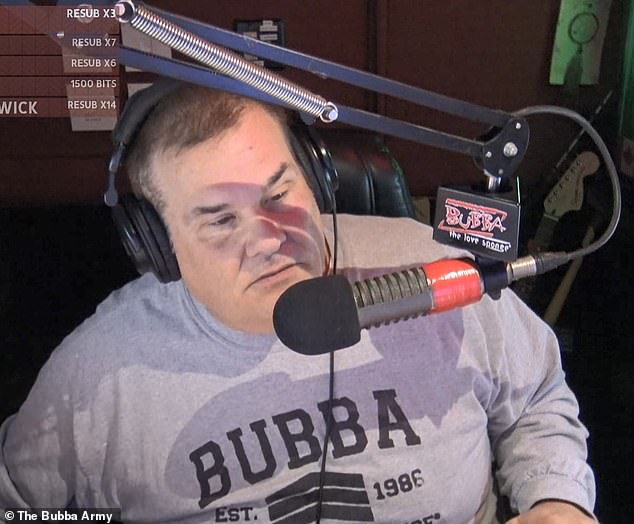 For about an hour each week, Carlson would call into the show hosted by Bubba the Love Sponge (above), real name Todd Clem, and weigh in on current events, often sharing controversial opinions in vulgar terms

One of the earlier transcripts of Bubba the Love Sponge is from a September 5, 2006, show during which the group talks about Warren Jeffs, who at the time was on the FBI’s Top Ten Most Wanted Fugitives list for his involvement in arranging illegal underage marriage.

Carlson calls the charges against Jeffs ‘bullshit’ because ‘arranging a marriage between a 16-year-old and a 27-year-old is not the same as pulling a stranger off the street and raping her’.

On another show, Carlson said that if he made the laws, Jeffs would be go free and Michael Vick, who was convicted of dog fighting, would be executed.

In an April 2006 show about a teacher who had sex with a 13-year-old student multiple times, Carlson said: ‘Teachers like this, not necessarily this one in particular, but they are doing a service to all 13-year-old girls by taking the pressure off. They are a pressure relief valve, like the kind you have on your furnace.’

The sixth and final transcript from the first section of the MMFA report, taken from a January 2008 show, contains a conversation about Bill Clinton.

Carlson says: ‘Why doesn’t [Bill] divorce [Hillary] and, you know, take up plural marriage or something with a bunch of teenagers in a foreign country.’

Tucker went on a rant about confusion over sexual consent during an April 2006 show about gang rape allegations against Duke University lacrosse players.

‘Well, I think they could get railroaded. I mean, you know, look, here’s the bottom line…. this woman sells sex for a living. OK? I’m not attacking that — I’m merely noting it. She sells sex for a living. If she’s accusing other people of nonconsensual sex, it’s a little more complicated than if some, you know, housewife claims she was pulled off the street and raped. It’s just not the same thing. It’s harder to determine what’s consensual and what’s not.

‘And to act like, you know, these guys absolutely did it because she’s this oppressed stripper, pardon me, adult dancer or exotic dancer, whatever the hell they’re calling her, is ridiculous. I mean, these kids, maybe they did do something wrong, I don’t know. But, I mean, you got to give them the benefit of the doubt.’

In another show he called for the elimination of rape shield laws, which protect the identity of sexual assault victims by keeping their names out of police records and court documents.

It’s unclear what sparked the conversation on the May 9, 2006, program.

Carlson says: ‘One thing that can be done immediately is to eliminate rape shield laws. I mean, why is it if I accuse you of embezzlement, of shooting my dog, or shooting me, of any crime, I have to go face you in open court. My name is available to anybody who’s reporting on the case, right?

He continues: ‘So if I’m alleging rape, I have the protection of anonymity. I can say whatever I want while hiding behind anonymity, while the person I accused, whether he’s guilty or not, has his life destroyed. That’s totally unfair.

We’ve done a couple of shows on this, and we always had these feminists on who kind of: “Well, because no one would ever report rape”. Really? I don’t know. Women seem to be adults to me. I mean, in other words, if you are grievously injured by another person, it’s not your fault. I don’t understand why, if you’re an adult, you just can’t get up and say: “This is what the person did to me.”‘

Two other shows included in the report detail discussions about abusing women when they misbehave.

In one from August 2, 2006, Bubba, his co-host and Carlson are discussing an upcoming guest, Miami Dolphins football player Lamar Thomas, who allegedly choked his girlfriend because ‘she was acting up’.

According to MMFA, Tucker could be heard laughing at the serious allegations.

In the second show from January 6, 2010, Bubba and guest Hulk Hogan talks about how the former ‘choked out’ a woman named Rebecca.

Carlson stays largely silent as the rather disturbing details are laid out.

Carlson launched an attack on TV host Alexis Stewart during a May 2, 2006, show after Bubba and his co-host mention that they run into her frequently.

He said after he heard Stewart’s appearance on MSNBC: ‘I just wanted to give her the spanking she so desperately needs.

‘She seems so high maintenance, she seems like the kind of person you marry and then just the rest of your life is like hell.’

Bubba chimes in: ‘She seemed like the kind of girl that you marry and then go out and have a w**** on the side.’

Carlson replies: ‘At least, and then go shoot yourself. And even that’s not enough to raise her spirits.’

Bubba then says: ‘She’s got real big f***ing Dumbo teacup for ears. She looks like a taxicab going down the road with the doors open, Brent, with her f***ing ears.

Carlson responds: I don’t normally laugh at girls’ appearances, just because I think it’s mean. But she — I’m bending the rule for her.’

Carlson took aim at Paris Hilton and Britney Spears in an August 5, 2008, show when talking about one of then-Democratic presidential candidate Barack Obama’s campaign commercials.

He said the campaign was ‘trying to say that [Obama is] coming for your pristine white daughters by putting two of the biggest white w****s in America’ in the ad.

In a show that aired on election day, Carlson revealed that he had voted for Republican candidate John McCain, to which Bubba said: ‘Because you want to f*** Sarah Palin.’

Carlson replied: ‘I’ll agree with that.’

Three of the MMFA transcripts in this section of the report contain vulgar descriptions of Hillary Clinton.

In March 2006, ahead of the Democratic presidential primaries, Tucker said of the then-Senator: ‘She has dreams of real power. Now, if she were to get real power — let’s say she were to get absolute power, how long do you think it would take before she castrated you?’

He made similar comments during a show two days later, saying: ‘The problem with Hillary is you look at Hillary and you know in your heart that if she could castrate you, she would.

‘So thereby she gets not a single vote from any white male in the country. Now you can hate white males if you want, but you kind of need them to vote for you.’

Two years later in early 2008, when Hillary was a strong frontrunner for the Democratic nomination, Carlson said: ‘Here’s Hillary, but there’s also someone who isn’t so strongly anti-penis also running with her.’ 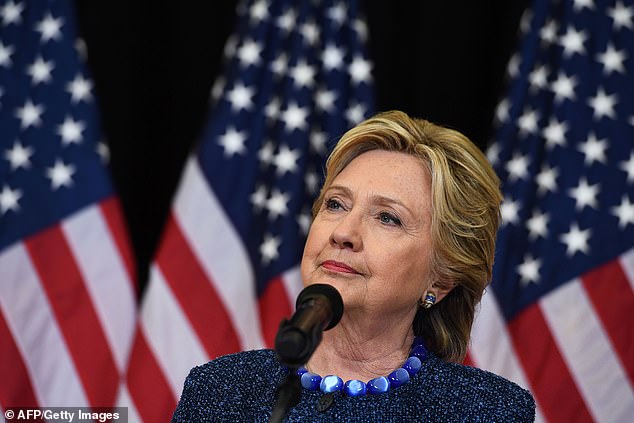 Carlson slammed Hillary Clinton in several radio appearances, calling her ‘anti-penis’ and saying: ‘You know in your heart that if she could castrate you, she would’

He attacked fellow ‘man-hater’ Oprah Winfrey during a December 2007 show.

‘Somehow the rest of us have been bullied into pretending that Oprah’s great, that she doesn’t hate the penis, that she’s not anti-man. But she completely is,’ Carlson said.

‘The subtext of every Oprah show is men suck. They abuse you, they rape you, they sleep with your sister and leave you.’

In other transcripts, Carlson calls media mogul Arianna Huffington ‘a pig’ and says he feels sorry for then-Supreme Court nominee Elena Kagan because: ‘I feel sorry for unattractive women.’

On a show that aired May 2, 2006, Carlson described how in his ‘brief experience,’ arguing with women ‘gets them going’.

He claimed that women ‘love it’ when they’re put in their place.

On another show he said: ‘There’s no Canadian woman that you’d want to pay to sleep with. You know that’s true.’

Perhaps his most disturbing comments came during an October 30, 2007, show.

‘By the way, women hate you when they do you wrong and you put up with it,’ Carlson says.

‘Because they hate weakness. They’re like dogs that way. They can smell it on you, and they have contempt for it; they’ll bite you.

He adds: ‘I mean, I love women, but they’re extremely primitive, they’re basic, they’re not that hard to understand. And one of the things they hate more than anything is weakness in a man.’