Tulsi Gabbard, a 2020 presidential candidate, filed a lawsuit against Google LLC on Thursday after the technology company suspended her advertising account following the June Democrat debates.

Gabbard, widely viewed as a longshot contender in the race, briefly became the most searched candidate on Google during the first night of the Miami debates on June 26.

About a month later, the Hawaii congresswoman has now filed a federal lawsuit in Los Angeles claiming Google infringed on her First Amendment rights by suspending her campaign’s advertising account.

Gabbard’s campaign committee, Tulsi Now Inc., alleges that the company that runs the most popular search engine in the world suspended her campaign’s advertising for six hours on June 27-28.

It says the suspension impeded her campaign from raising money and spreading her message during her post-debate boost. 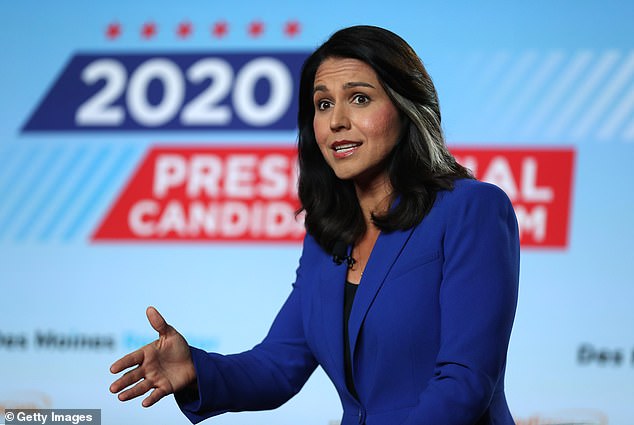 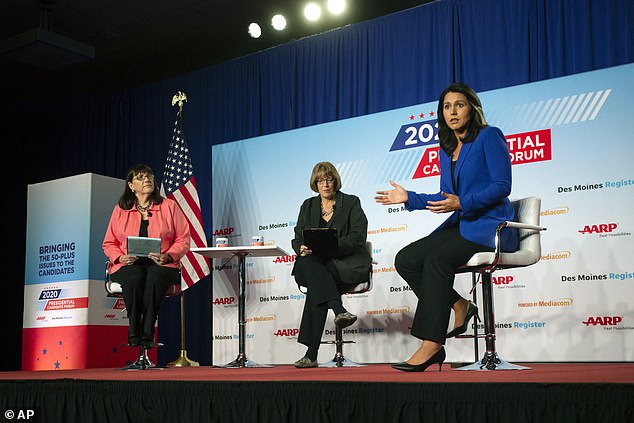 Gabbard is considered a long shot candidate among the more than two dozen Democrats running, but was widely viewed as the ‘winner’ of the first night of the first round of Democratic debates last month in Miami

In an effort to capitalize on Gabbard’s brief spotlight moment, her campaign wanted to buy ads that would have placed its website, and link to donate to the campaign, at the top of Google search results when people searched for her name.

‘Google’s arbitrary and capricious treatment of Gabbard’s campaign should raise concerns for policymakers everywhere about the company’s ability to use its dominance to impact political discourse, in a way that interferes with the upcoming 2020 presidential election,’ the lawsuit said.

After the campaign realized the advertising account had been suspended, workers for the campaign sent an email to a Google representative June 27 at 9:30 p.m. The campaign included a picture with an image of the notice of suspension that said it was due to ‘problems with billing information or violations of our advertising policies.’

The lawsuit said: ‘To this day, Google has not provided a straight answer — let alone a credible one — as to why Tulsi’s political speech was silenced when millions of people wanted to hear from her.’

In reinstating the advertising account, Google said it was initially suspended so the tech giant could verify billing information and policy compliance.

In an email to supporter, Gabbard’s campaign said she was committing to breaking up big tech companies.

‘Google controls 88 percent of all internet search in the United States – essentially giving it control over our access to information,’ the email states. ‘That’s one reason why Tulsi has been a vocal proponent of breaking up the tech monopolies.’

The lawsuit also alleged that Gabbard’s campaign emails were being placed in the spam folder in Google’s email server, Gmail, at ‘a disproportionately high rate’ compared to the other more than two dozen candidates.

The lawsuit, which is believed to be the first time a presidential candidate has sued a major technology firm, is seeking an injunction against Google from further meddling in the election and damages to her campaign of at least $50 million.

Although no other campaigns have alleged Google has suspended their advertising accounts, the tech company said it has an automated system that flags unusual activity related to advertisers accounts.

A spokesperson for Google, Jose Castaneda, told The New York Times that this practice is to help prevent fraud.

‘In this case, our system triggered a suspension and the account was reinstated shortly thereafter,’ he said of Gabbard’s advertising account. ‘We are proud to offer ad products that help campaigns connect directly with voters, and we do so without bias toward any party or political ideology.’

The 38-year-old lawmaker still regularly polls at less than 1 per cent among likely Democratic voters, even after the first round of debates.

The boost was also reflected in her popularity that night – a poll on popular aggregation site The Drudge Report showed viewers thought she won the night. Nearly 40 per cent said Gabbard was the winner and Massachusetts Senator Elizabeth Warren, who usually polls as No. 3, was in second place for the night.

The first debate night was largely seen as the B Team since front-runners Joe Biden and Bernie Sanders were not on stage.

Gabbard, who was the youngest woman ever to become a U.S. representative, only spoke for 6.6 minutes during the debate, but remained relatively calm and concise, and it was enough to get her name out there.

Gabbard also was the first Hindu member of Congress.

Google and other tech companies, like Facebook, are receiving increasing scrutiny by lawmakers and regulators over their influence in political debates and elections.

‘Google’s discriminatory actions against my campaign are reflective of how dangerous their complete dominance over internet search is, and how the increasing dominance of big tech companies over our public discourse threatens our core American values,’ Ms. Gabbard said in a statement. ‘This is a threat to free speech, fair elections, and to our democracy, and I intend to fight back on behalf of all Americans.’

Gabbard’s criticism of the tech company reflects similar complaints made in Republican circles who claim their voices have been stifled on the internet, and especially on social media sites.

She has support from those in both political parties, likely due to her wariness of big tech, which Republican and Democratic voters alike can relate to.

‘Big Tech’s dominance represents a clear and present danger to our democracy,’ Gabbard’s campaign sent in its email to supporters on the lawsuit. ‘That’s why Tulsi is fighting back, and has filed a lawsuit against Google in federal court.’