A woman whose fiance died the day before they were due to get married could not believe her eyes when he gifted her a wedding ring from beyond the grave.

Danielle Cumberworth and her husband-to-be, Ashley Grant-Smith, 27 who had terminal cancer, had already got their wedding rings sorted.

But unbeknown to her, Ashley had ordered a bespoke ring for Danielle.

She said: ‘Two months after Ashley died, I got home from work and had missed a parcel being delivered. I went to the sorting office and picked it up.

‘I opened it up in the car in the car park and it was an engagement ring from Ashley.

‘It was total surprise. I didn’t cry, I laughed. He had not told me about it at all. It is a beautiful diamond ring in white gold.’

Ashley Grant-Smith (left), 27, died the day before he was due to get married to Danielle Cumberworth (right) in Leicester in October 2017 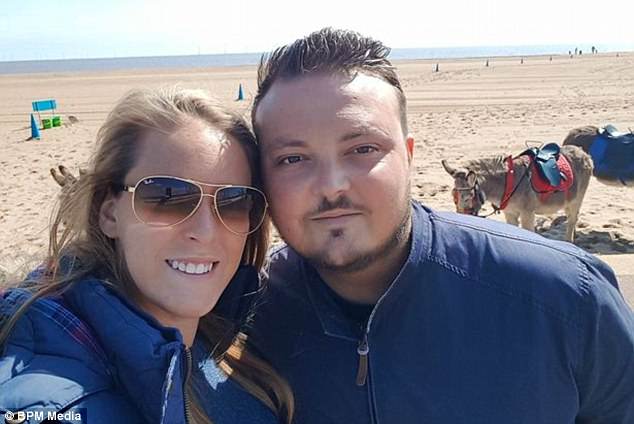 The couple, who were due to get married in Leicester on October 10 last year, are pictured before Ashley’s illness took hold

Ashley died, after a two-year battle with a rare blood cancer, while Danielle was at Leicester Register Office sorting out documents to allow them to tie the knot the following day at his parents’ house in New Parks, Leicester.

Danielle, who met Ashley while on holiday in Crete in 2015, said: ‘I went into Leicester to get the paperwork sorted.

‘I knew Ashley had had a rough night, but I had to go to get into town to get the go-ahead for the wedding the next day – October 10.

‘As soon as I stepped inside the register office, I got a call from Ashley’s dad.

‘He told me to come back as soon as I could. I knew then that Ashley had died.

‘When I got back to this parents’ house he was just lying there. It was awful.’

Danielle, of Tunbridge Wells, Kent, had bought wedding bands in Leicester city centre two days previously, but had no idea that Ashley had ordered her an engagement ring.

She said: ‘The ring had taken months to get to me because he had had it specially made to his own design. 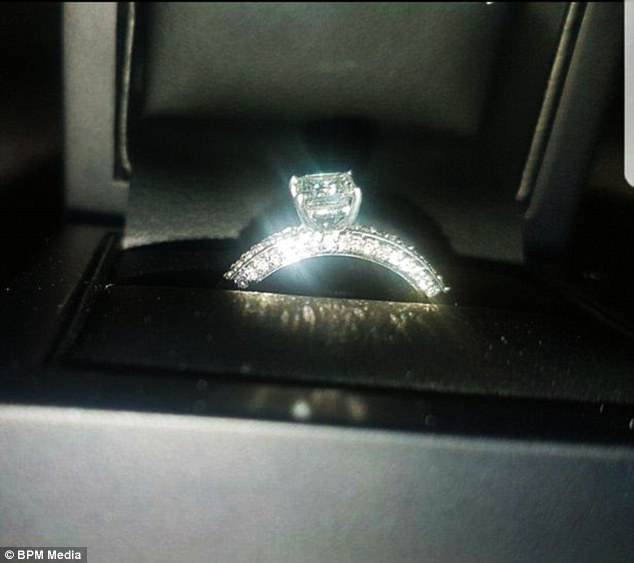 ‘I will treasure it forever, and our wedding rings that were never used.’

Recalling when she first met the man who would become her fiance, Danielle said: ‘I was playing a drinking game with my friends while sitting by the pool, and Ashley and a mate pulled up a sun-lounger.

‘We got on well and stayed as a group for the rest of the holiday.

‘He showed me a small lump on his neck. He said it was probably nothing and he was taking antibiotics to get rid of it.’

After the holiday they stayed in touch, with Ashley living and working in London and Danielle in Kent.

She said: ‘He announced me to his family as his girlfriend and I pretty much went with that. That was typical of Ashley – he just went for it and all of sudden we were a couple.’

Two months later, Ashley went for blood tests at his GP’s surgery after the lump on his neck got bigger.

Danielle said: ‘Ashley was told it was cancer, but the doctors were not sure which type. 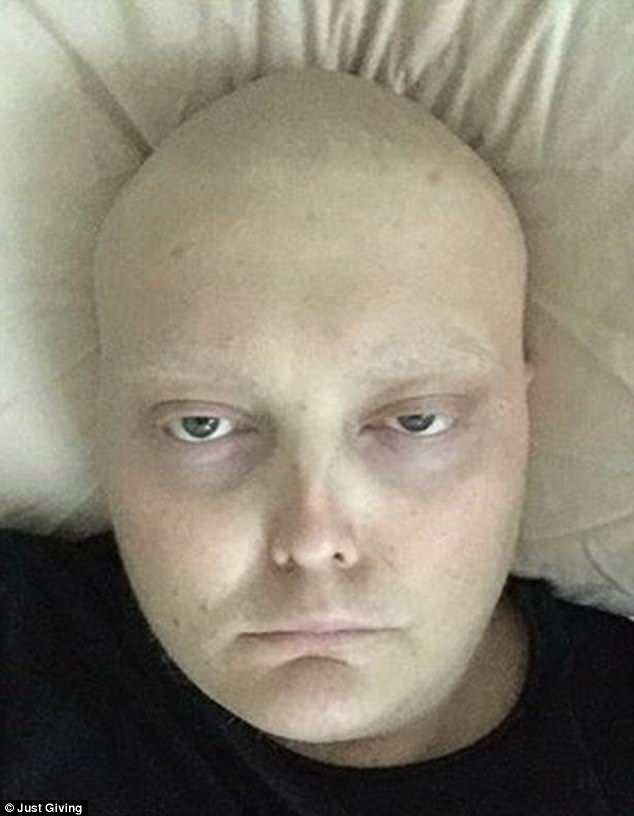 ‘After more tests, he was told in April 2016 that the lump was peripheral T-cell lymphoma, a rare blood cancer.

‘By then we’d only been together for a year, and had yet to live together.

As a relatively new couple, we hadn’t even met all of each other’s mates.’

The couple moved in together in Danielle’s flat in Tonbridge Wells.

He also had extensive radiotherapy and took part in two medical trials. The treatment made Ashley ill and he lost his hair and suffered a series of infections and setbacks.

Danielle said: ‘As the months went by, the tumour on Ashley’s shoulder continued to grow. We nicknamed it Colin.

‘I joked, ‘There are three of us in this relationship and it’s too crowded – Colin must go’.’ 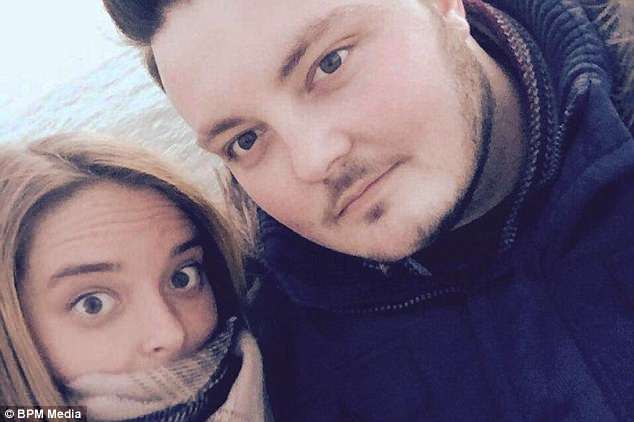 Danielle (pictured left with Ashley right) said when she found out: ‘It was total surprise. I didn’t cry, I laughed. He had not told me about it at all.’

In August 2017, a donor was found through the Anthony Nolan Foundation to enable Ashley to have a stem cell transplant.

By then, all other available treatments had been exhausted and it was made clear that this was the last option.

But Ashley began to deteriorate quickly and became too poorly to have the transplant.

Scans revealed that the cancer was spreading even further around his body.

With no more options available to Ashley on the NHS, the couple found a doctor at University College Hospital willing to take him as a private patient for immunotherapy to put him into remission.

This would then allow +him to have the stem cell transplant.

Danielle said: ‘We began fund-raising as soon as we could. In a few weeks we raised £25,000. We hoped Ashley would begin his immunotherapy in the autumn, but it wasn’t to be.’ 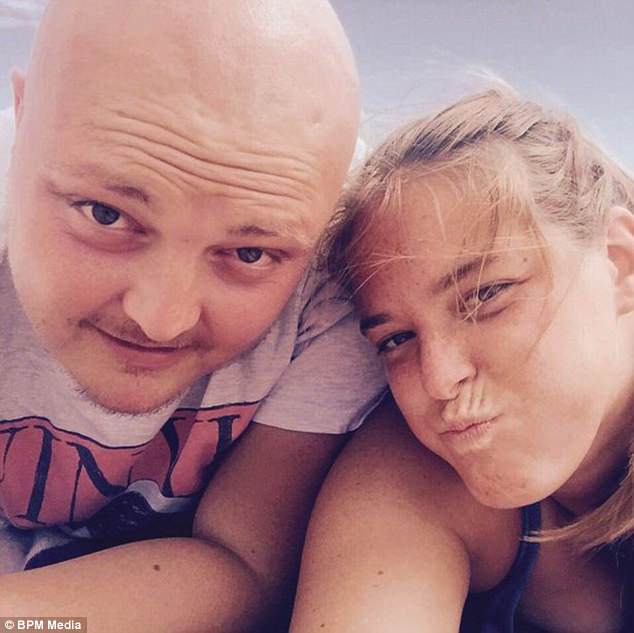 In September 2017, tests revealed that Ashley’s cancer was terminal.. Danielle said: ‘I was there in the hospital room with him and his mum and dad and sister when the doctors gave him the news.

‘I was just numb.

‘The doctors said, ‘You can stay here in the hospital, go to a hospice or go home’. Ashley said in an instant, ‘I want to go back to Leicester’.’

The couple moved into Ashley’s parents’ house in New Parks on October 5.

‘His mum and me looked after him as best we could,’ said Danielle.

‘The word went out and all Ashley’s friends and relatives came to see him. He was too ill to go out anywhere, so everyone came to him.

‘We also got him a takeaway meal from his favourite Chinese restaurant.’

While they were talking one day, the subject of tying the knot arose.

‘I asked him if he had any regrets in life and he said, ‘Not being able to marry you’,’ said Danielle.

‘So we set about putting that right and we were both looking forward to the big day, but we never made it.’

Hundreds of mourners turned out to pay their respects at Ashley’s funeral at Gilroes Cemetery and Crematorium, and there was a wake for him at the home of his beloved Leicester City.

Danielle said: ‘Ashley was a lifelong Leicester City fan. He would have loved the fact that we had his wake at the King Power Stadium.

‘He was a Leicester lad through and through, and I feel lucky that I got time with him.

‘I am sad we didn’t get to say our wedding vows to each other, but I have the rings to keep.

‘We had a relatively short time together but it has given me so many memories that I will treasure for the rest of my life.’