Tuneful Lewis Hamilton gets into the party spirit

Lewis Hamilton got into the party spirit as he jetted off to America having being crowned Formula One champion for the fourth time.

The 32-year-old belted out romantic classic ‘To be Loved’, by Jackie Wilson, as he cradled his ‘godson’ Darth Steve in a touching Instagram post.

He captioned the post: ‘Darth Steve came into my life 6 months ago and I’m so grateful I get to have him with me always. #comingtoamerica #nothadonedrinkyet’ 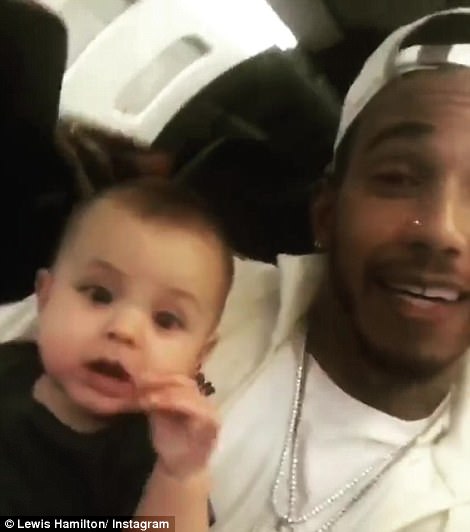 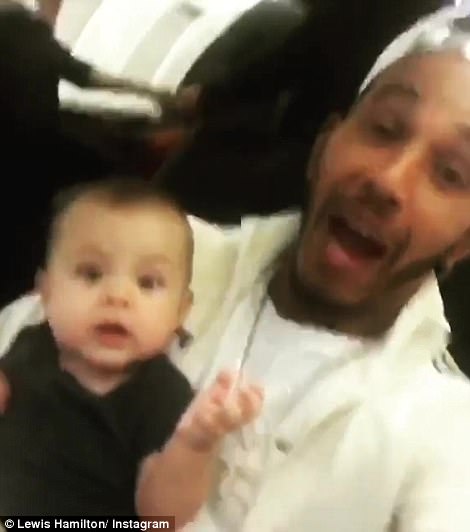 Hamilton yesterday clinched the F1 title in Mexico after Ferrari’s Sebastian Vettel failed to finish first or second and keep the competition alive going into the last two races of the season.

The overall win in the 2017 series makes Hamilton Britain’s most successful Formula One driver, lifting him above Sir Jackie Stewart who won three titles.

After the race, Hamilton said: ‘Viva Mexico. Wow. I just want to say a big thank you to everyone who came out, hopefully we gave them a good race. The Mexican fans are the best around the world and you guys create this atmosphere.’

He added: ‘It doesn’t feel real. That was not the kind of race I wanted. But I never gave up and that is what is important — what is in my heart. I kept going right to the end.’

In an Instagram post written after his success he said: ‘As a kid, I always dreamt of being in Formula 1. I never lost sight of that dream, even when people said it would be impossible. I stand here now with 4 World Championships and am proof that if you follow your dreams with everything you have, they can come true. I am so grateful to all 1,500 people in my Team who all have a dream of making the best F1 car and tirelessly make that dream a reality.

‘My fans, I would not be here without you. You’ve carried me through adversity and shared my joy in moments such as these. Truly, thank you. We are all rising together and I am so excited for what our future brings together.’ 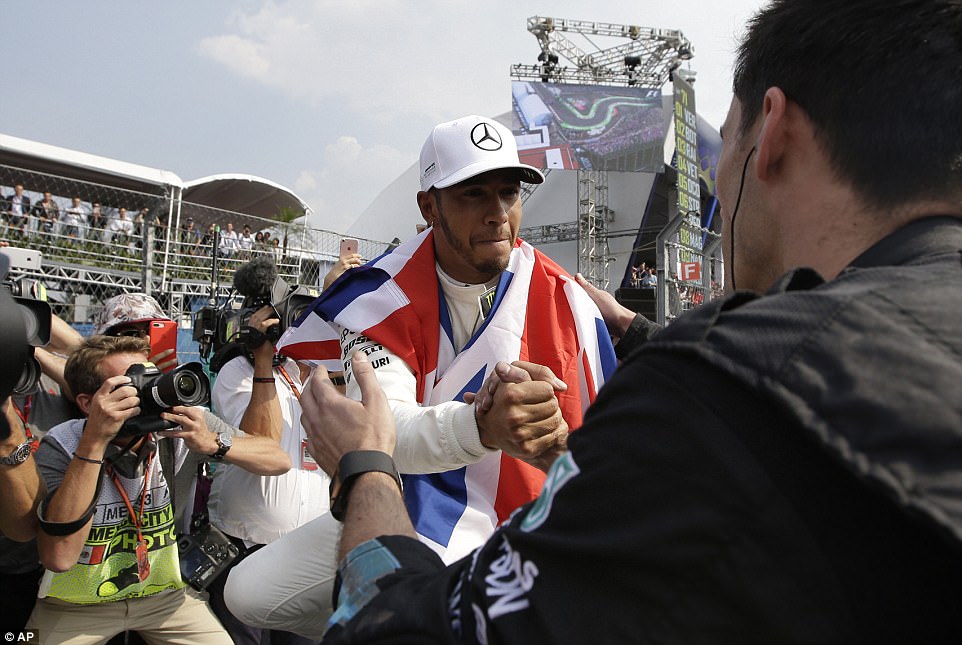 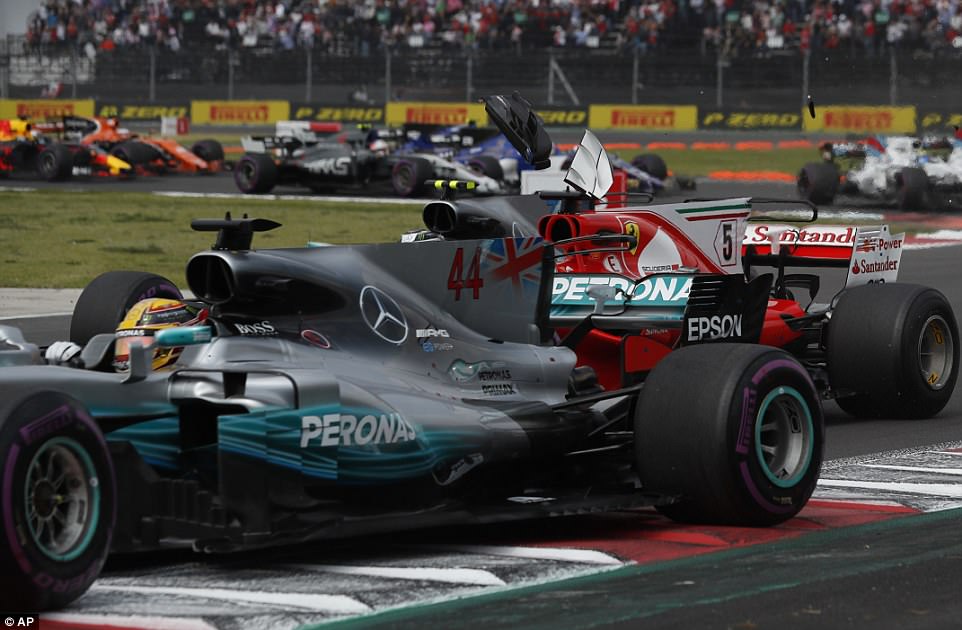 Hamilton and Vettel collided at the start of the Mexican Grand Prix, with a piece of the German’s fly falling off 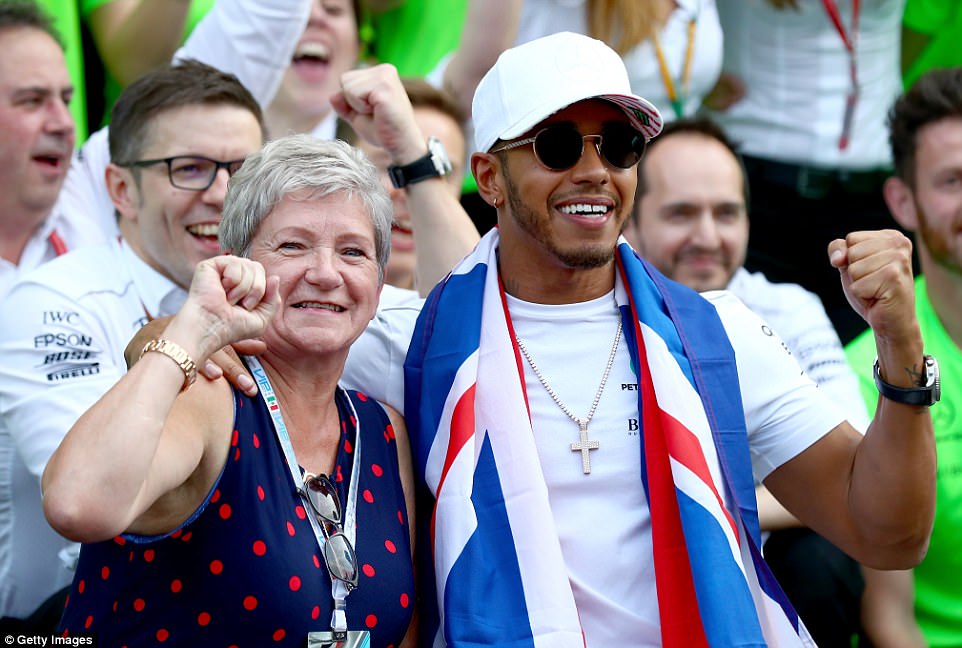 Niki Lauda, a three-time world champion and Mercedes’ non-executive director said: ‘Lewis won it, he deserves it and it has been the best driving than he has ever done before.’

Going into the race, Hamilton was aiming to get up to ninth which would mean that anything less than a win would see the Briton win the title.

Meanwhile Vettel needed an absolute minimum of a top two finish to extend the race.

Hamilton and Vettel, the two points leaders, were third and first on grid for the start of the race, but the drivers nearly took each other out of the race after colliding at the first corner.

The collision saw Hamilton fall to the back of the pack, but the 32-year-old Briton climbed his way back to finish ninth and win the title before the Brazilian Grand Prix next weekend.

Speaking after the race about the collision, Hamilton said: ‘I had a good a start, I don’t know what happened on turn three I gave him (Sebastian Vettel) plenty of room. A big thank you to my family, my team, Mercedes have been incredible for these last five years.’

He added: ‘It doesn’t feel real. It is not the kind of race I wanted, 40 seconds behind, but I never gave up. That is what is important and in my heart. I am grateful for today.’

When asked about the collision between Hamilton and Vettel, Lauda said: ‘I don’t know why Sebastian drove so aggressively to destroy his race and Lewis’. Lewis was in front and he (Vettel) hit him with his front wing, I just don’t understand it.

‘I’m more proud than the other three world championships we won together because this year was very competitive and today you saw the outstanding win of Max Verstappen.’ 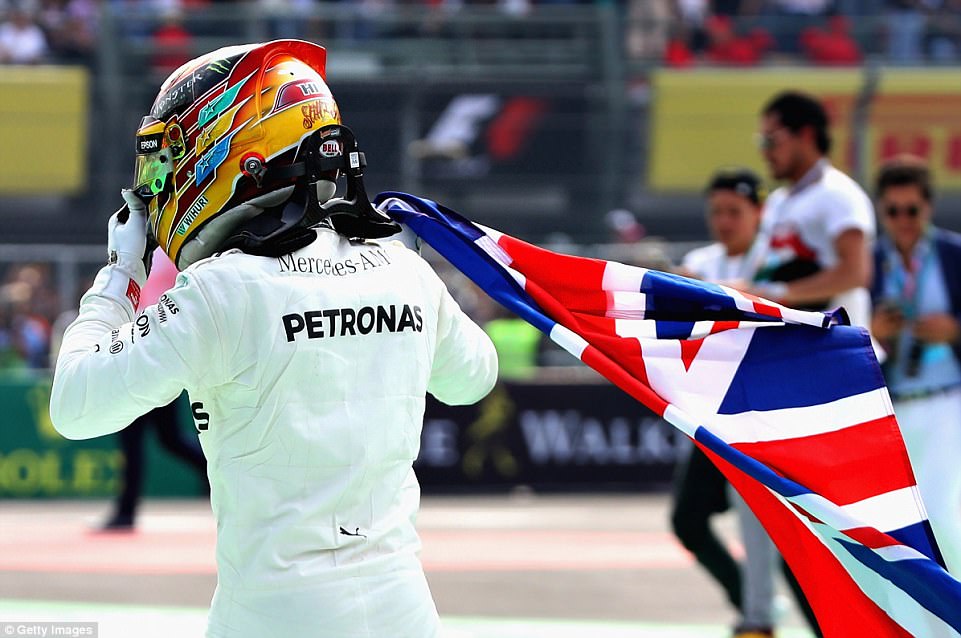 After the race, Hamilton said that his Formula One win did not ‘feel real’ and thanked his family and teammates for their support 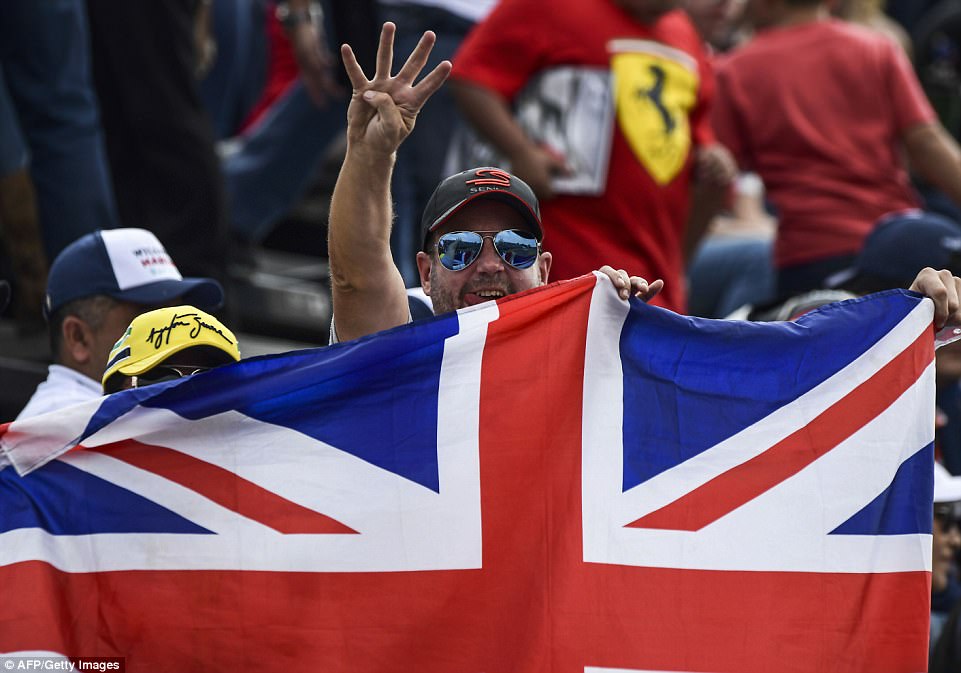 Hamilton’s ninth place finish saw him crowned the Formula One Drivers Champion for the fourth time, making him the mos successful Briton in the sport 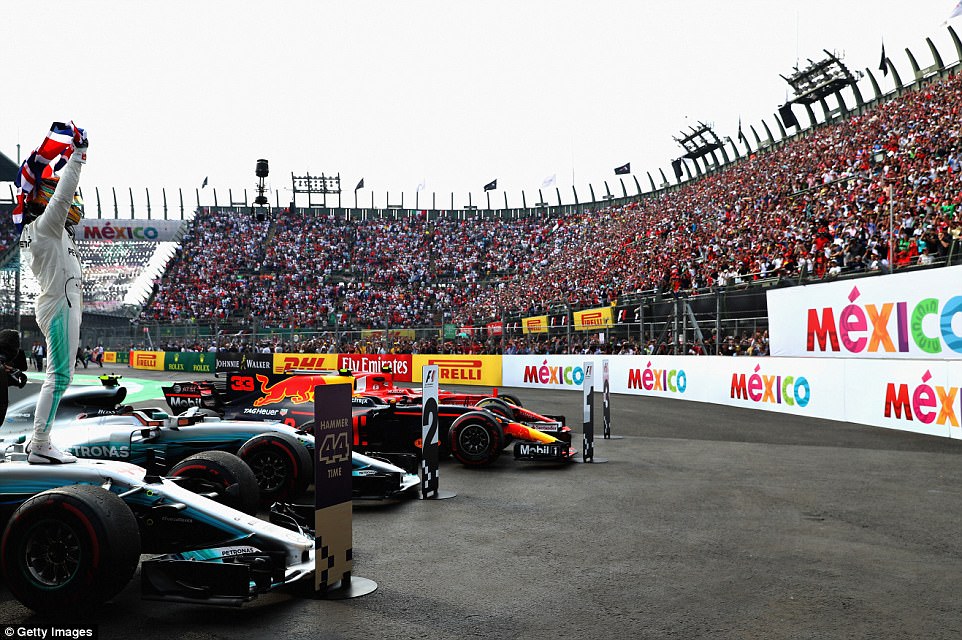 Meanwhile Vettel fell to 19th place after colliding with Hamilton and managed to pull himself back up to fourth place.

Following the collision, Hamilton asked his team ‘did he hit me deliberately’ over the radio, to which they replied ‘not sure’.

With 15 laps to go and climbing up the rankings, Hamilton asked his Mercedes team what position he needed, where he was told Vettel needed to be second.

Hamilton asked ‘is that possible?’ to which his team replied ‘negative’.

When Vettel managed to push himself into fourth place, he asked how far ahead team mate Kimi Raikkonen was. When told 26 seconds, he consigned himself to defeat, replying: ‘Mamma mia. I think that’s a bit too much.’ 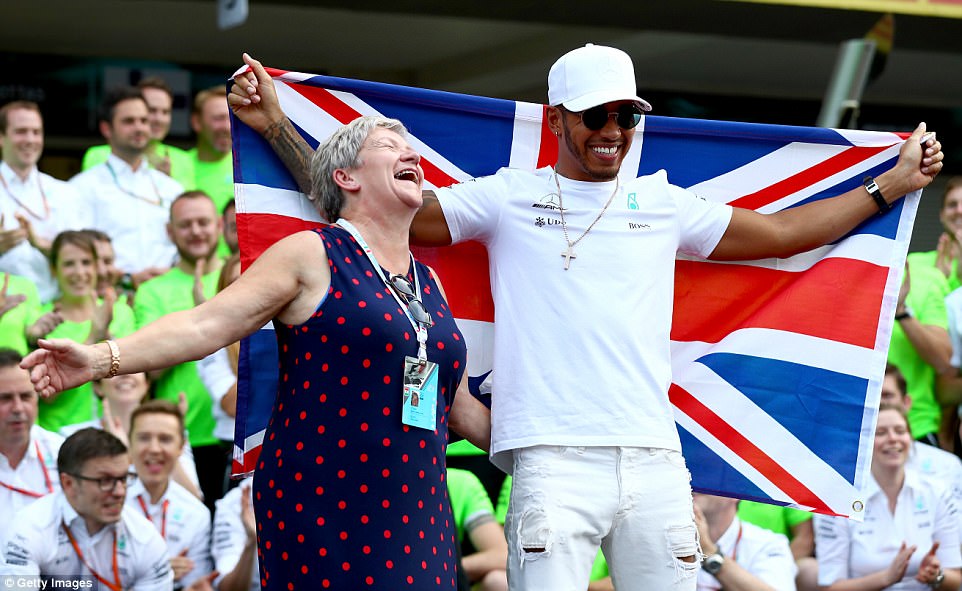 Lewis Hamilton has moved level on Drivers’ Championship wins with Vettel and Alain Prost on four world titles. He is now only behind Michael Schumacher, who holds the all-time record with on seven, and Argentine Juan Manuel Fangio’s who has won five.

Prior to Sunday’s race, Hamilton said that he wanted to win the championship ‘the right way’ by securing victory at the Mexico Grand Prix.

He said: ‘I want to show what I’m capable of in every race.

‘I have no desire to finish fifth and win the championship while someone else stands on the top step.’

He added: ‘The dream would be to stand on the top step having won the championship.’

The race was won by Dutchman Max Verstappen, with Valtteri Bottas and Kimi Räikkönen making up the rest of the podium positions. 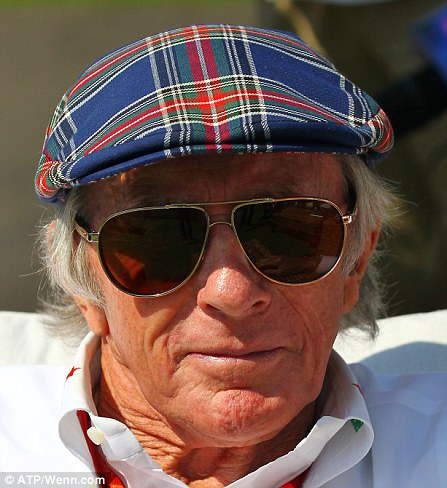 Sir John Young ‘Jackie’ Stewart, OBE was Formula One racing driver born in Milton, Dunbartonshire, Scotland on June 11, 1939. He was nicknamed ‘The Flying Scot’ and competed in Formula One between 1965 and 1973.

Sir Jackie attended Hartfield primary school in the nearby town of Dunbarton. He was unable to continue his education past the age of 16 and began working in his father’s garage as an apprentice mechanic.

The Scotsman won three World Drivers’ Championships in 1969, 1971 and 1973 and twice finished runner up over the course of his nine seasons racing.

His father was an amateur motorcycle racer and his brother Jimmy was a racing car driver who competed at the 1953 British Grand Prix at Silverstone. 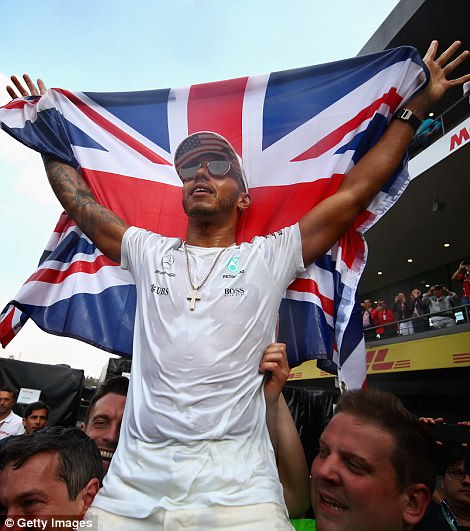 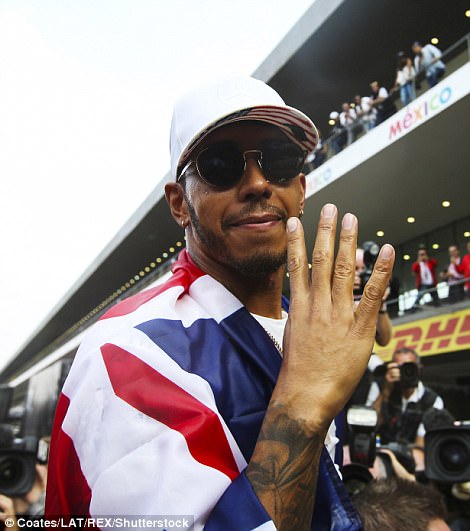 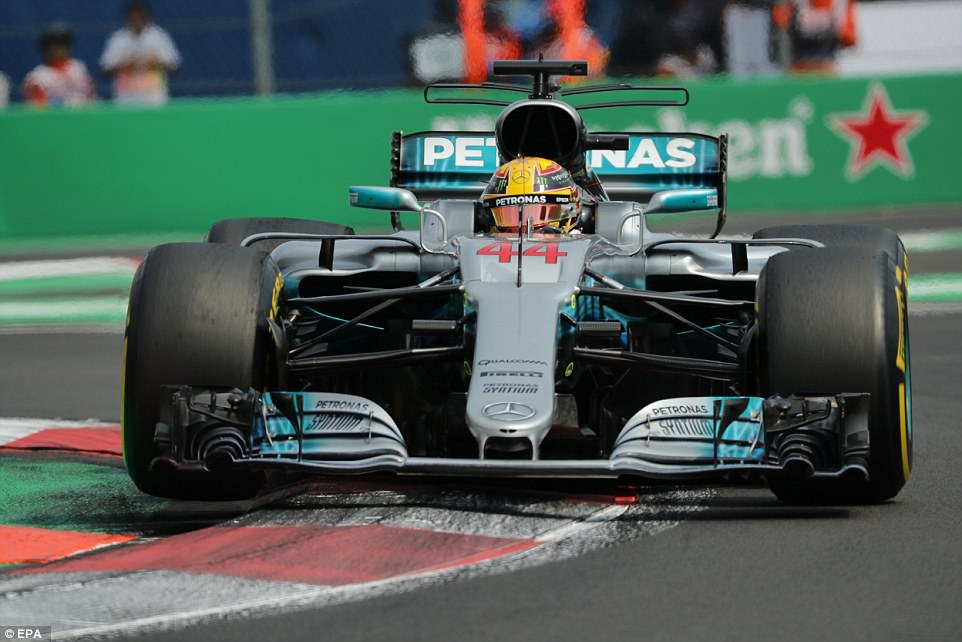 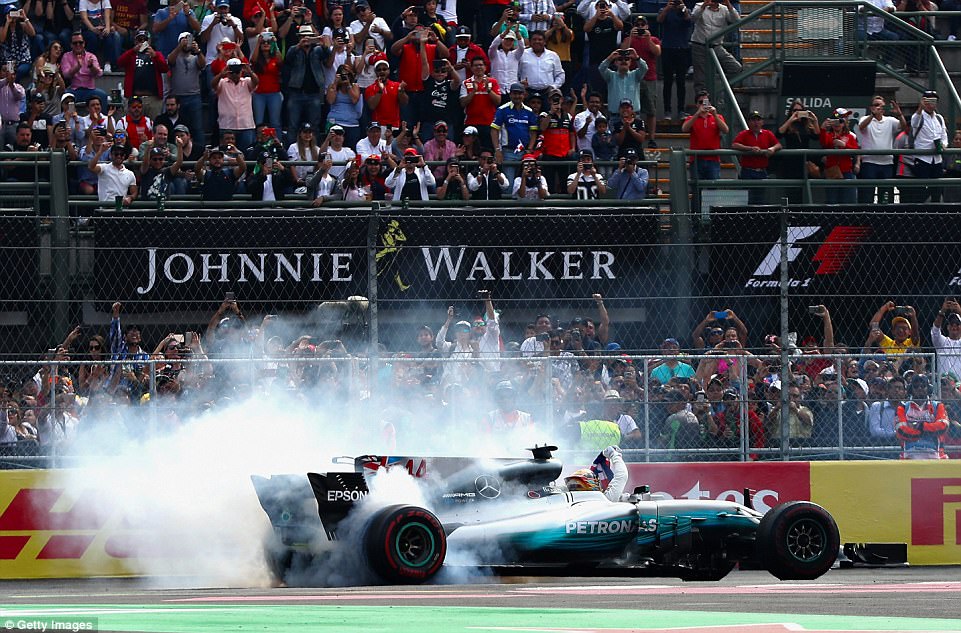 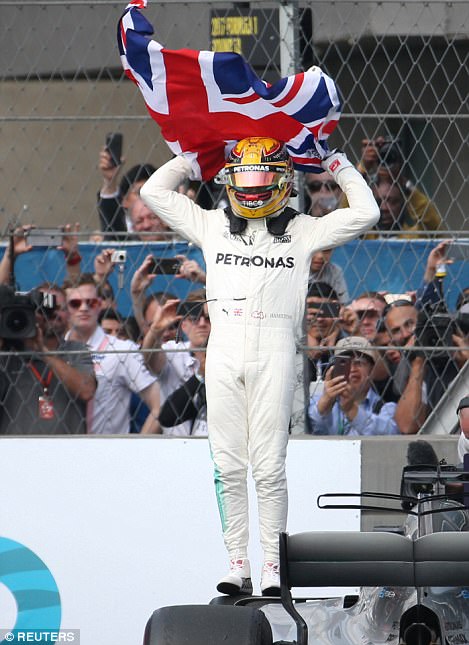 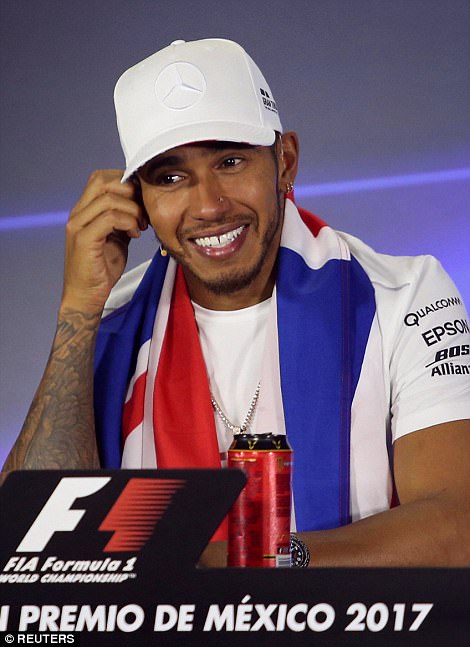 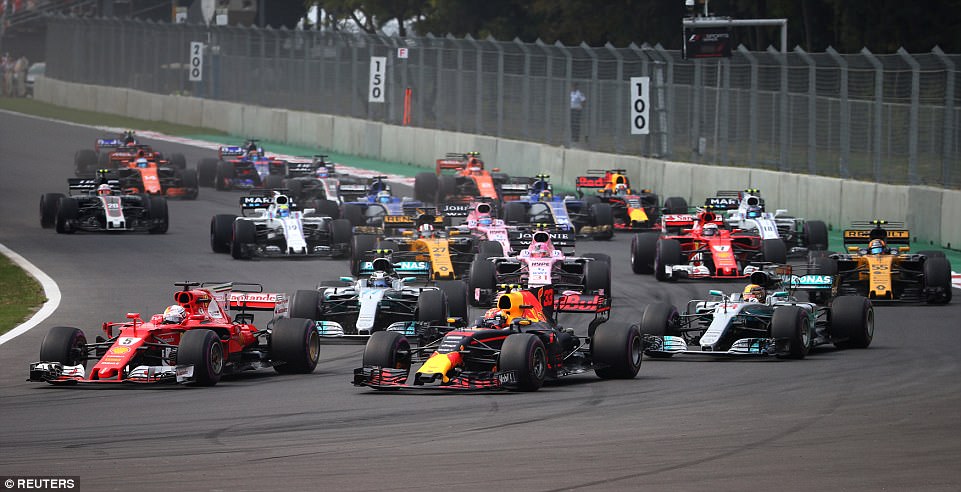 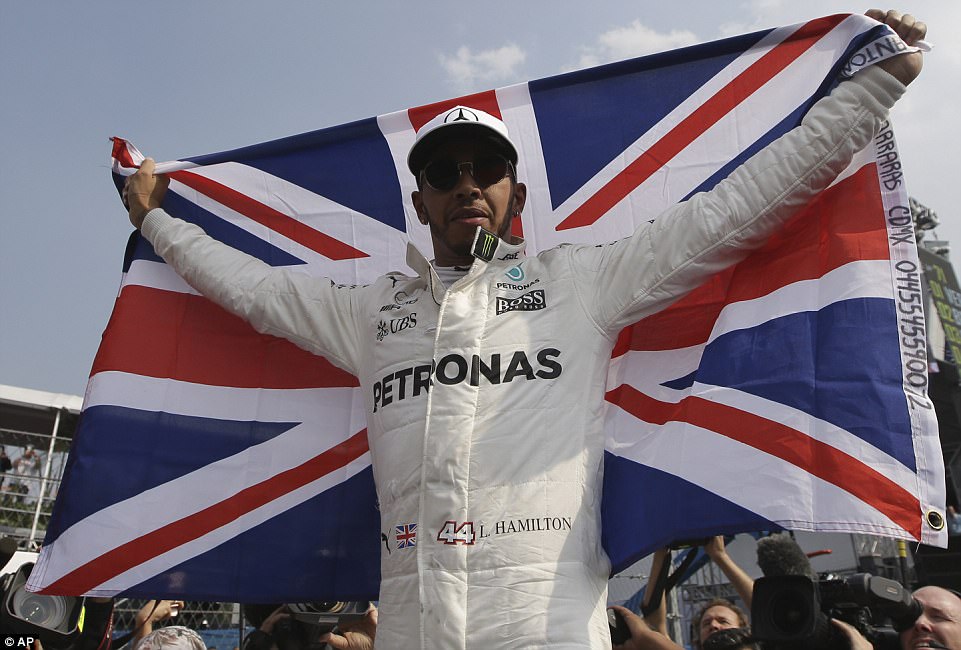 Lewis Hamilton has moved level on Drivers’ Championship wins with Vettel and Frenchman Alain Prost on four world titles, behind only Michael Schumacher, who holds the all-time record with on seven, and Argentine Juan Manuel Fangio’s who has won five 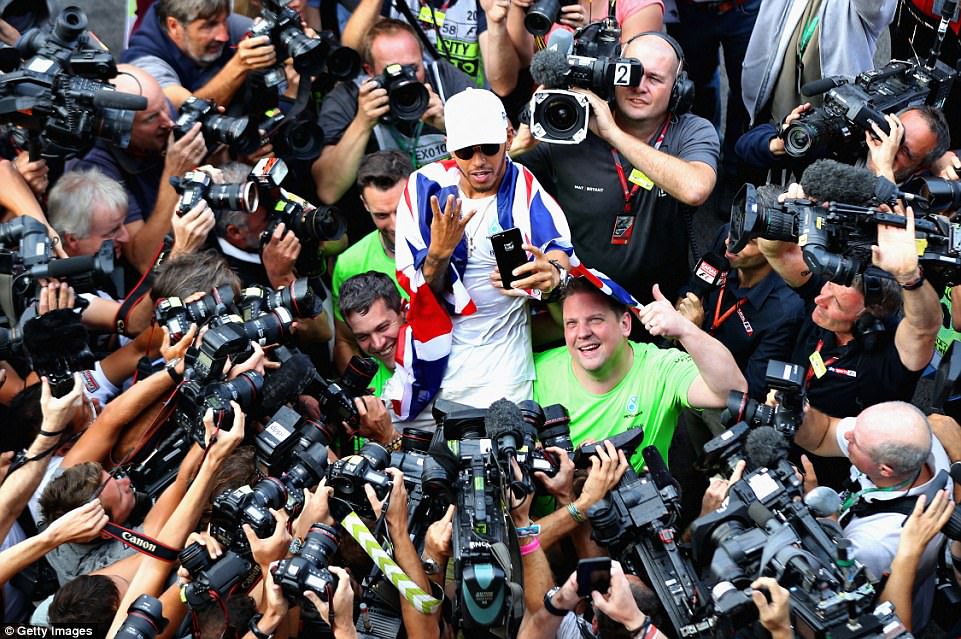